An updated version of Re:Zero kara Hajimeru Isekai Seikatsu is airing right now, so we're here to tell you what's changed from the original every week!

2020 is here and there's already a great reason to be excited⁠—Re:Zero kara Hajimeru Isekai Seikatsu 2nd Season is finally coming out in April, four years after the first season aired. But before we dive back into the Kingdom of Lugnica, there's a Director's Cut of the first season releasing weekly leading up to the second season, which Crunchyroll managed to get its hands on. But what's actually new about it?

As the Director's Cut rolls out each week, I'll be watching each version side-by-side (literally) and reporting on all the differences I spot, so check back here after each episode to find out what's new. I'll also be looking at the BD (Blu-ray Disc) version to see if any changes happened there first. If I miss anything, just send me a PM so I can add it in!

15:30 The first noticeable difference doesn't appear until 15:30 mark, but it's an interesting one. In the original cut, when Subaru asks for Emilia's name, she pauses and looks off into the distance before answering "Satella" in a somber manner. In the director's cut, she takes several seconds longer to answer, with extended pauses after Subaru's question and in the middle of "Watashi wa…" and "Satella." Both versions inject tension into the scene, but the few extra seconds in the director's cut accentuates Emilia's initial surprise and inner thought process.

There are numerous moments throughout the episode that extend a shot by a fraction of a second, so I'll only be noting those of significant length. 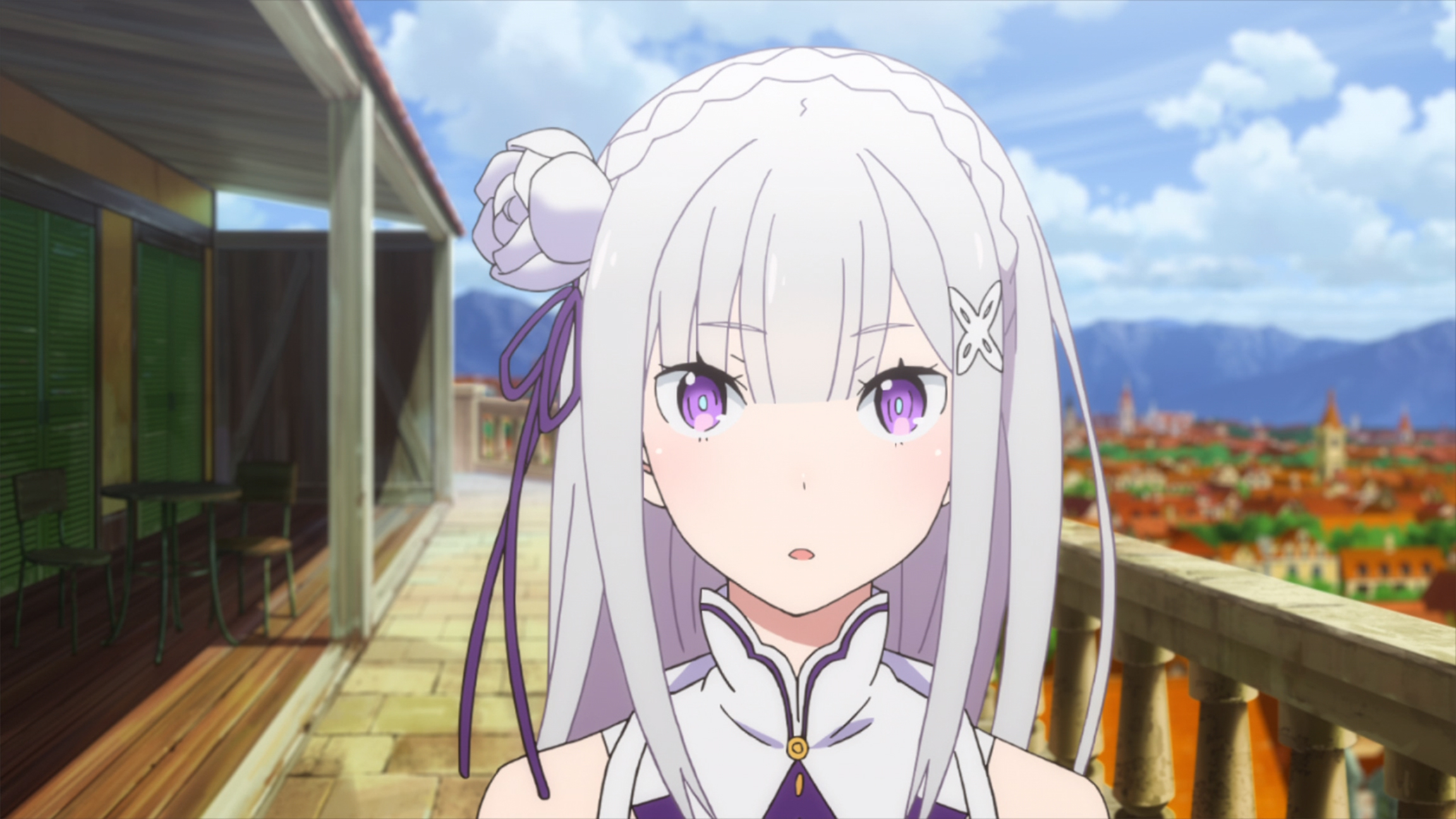 21:12 Subaru and Emilia return to where the insignia was stolen to find that it's outside the shop Subaru dropped by earlier. Much to their surprise, the lost child they helped before is the shopkeeper's daughter. In the background of the original version, there's a CG NPC walking down the street, but they've been removed in the Director's Cut. There's always a lot of background traffic, so I might've missed a previous instance of an NPC being removed, but this is the first I've noticed while actively looking. This was originally updated in the BD version.

22:15 This is very minor, but in the Director's Cut, the overlooking shot of the city slums lasts several seconds longer than the original. 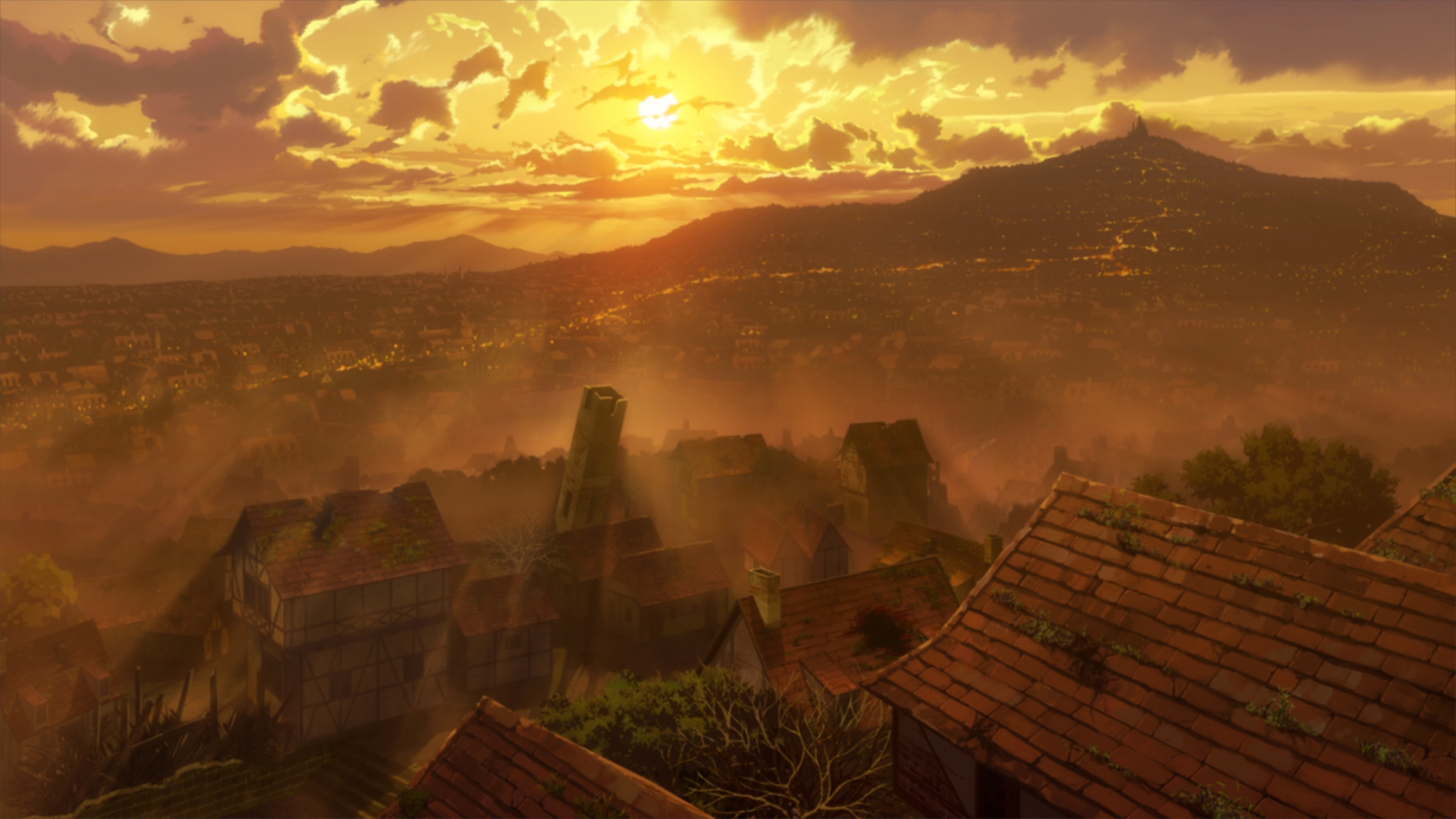 24:54 As Emilia is surrounded with light while communicating with the lesser spirits, the sequence and Subaru's gaze are extended by several seconds, thereby holding the tranquility. This is the point where the first part of the original first episode ends (Crunchyroll splits it up as 1A and 1B). 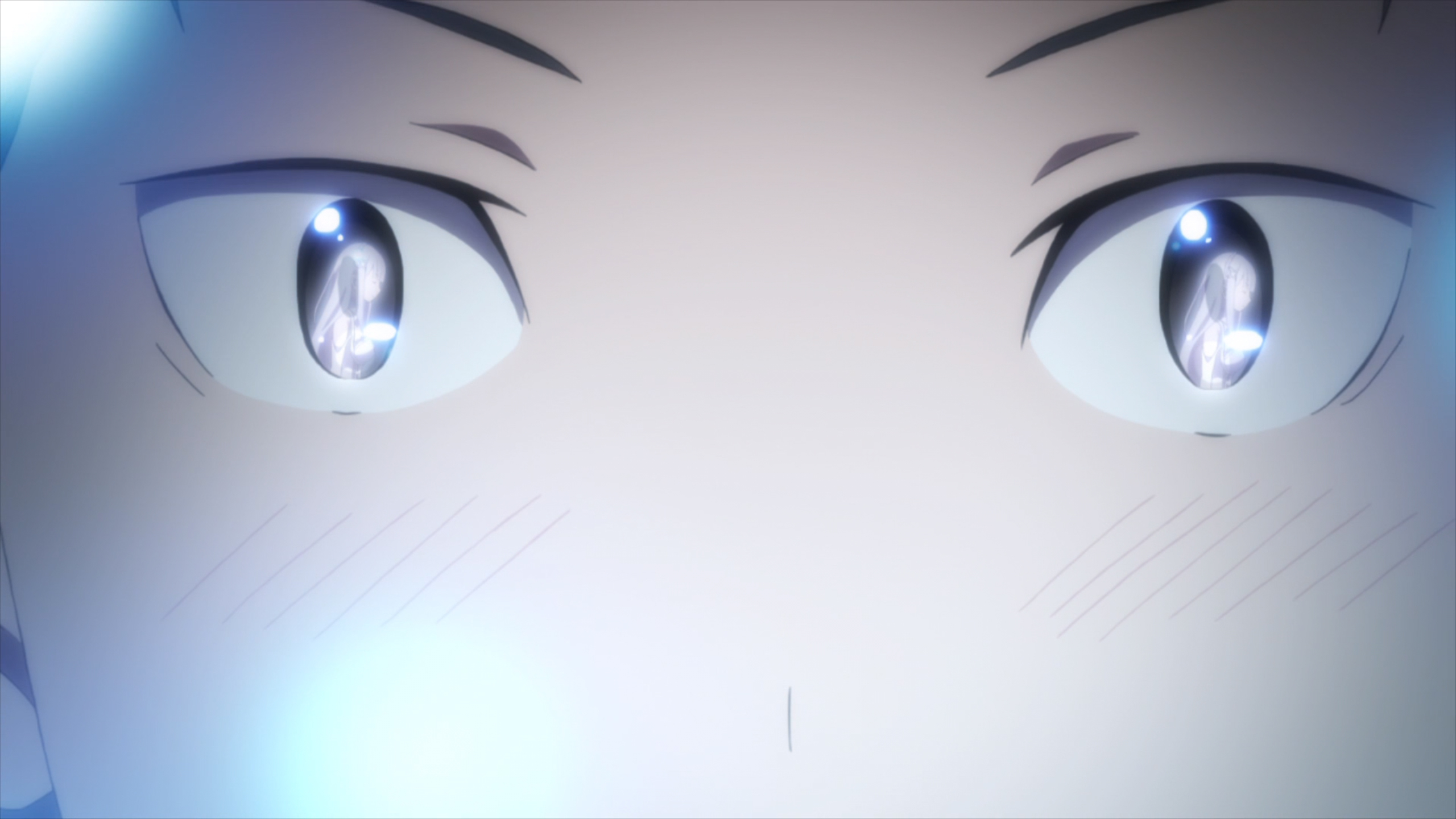 41:45 Another CG touch-up job, but by improving instead of removing: the pile of coins that Elsa pours onto the table looks much more realistic and matches the lighting of the room. This was originally updated in the BD version.

49:20 In the final shot of Subaru reflected in Emilia's eyes, the moving NPCs in the background are removed. This was originally updated in the BD version. 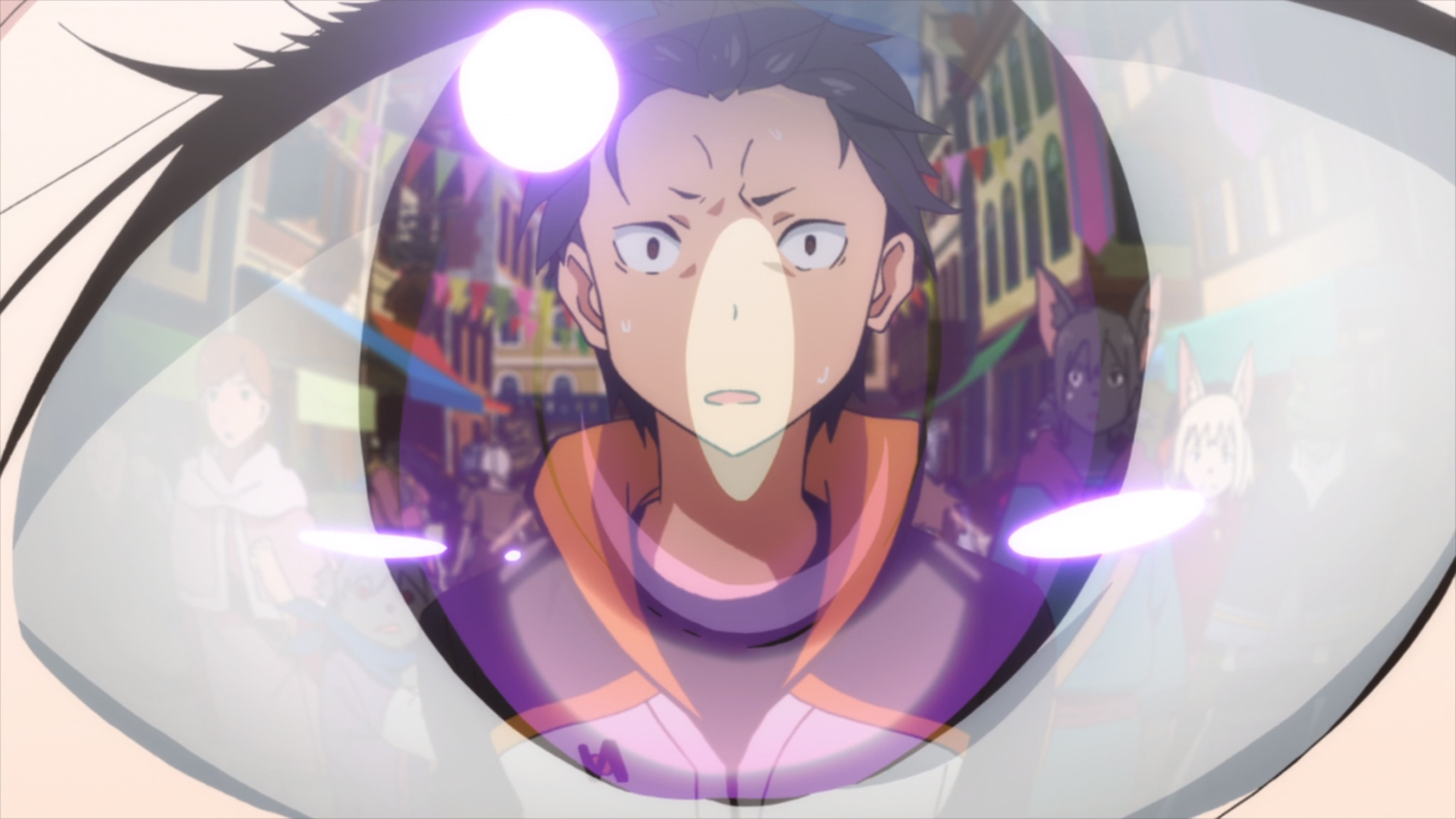 49:28 The original cut has credits over the top of the final scene, while the Director's Cut has a separate credits roll that features the full version of STYX HELIX by MYTH & ROID.

1:09 - 2:36 In the opening theme animation for the original broadcast and BD version, the credits have the title font and a glitch-like effect on them. In the Director's Cut, all text is normal and static.

23:01 The Director's Cut switches over to episode 3 of the original. Naturally, the overlaying opening credits are removed.

44:27 Similarly, there's overlaying ending credits from this point in the original. The Director's Cut instead has a separate ending sequence without the overlaying credits. 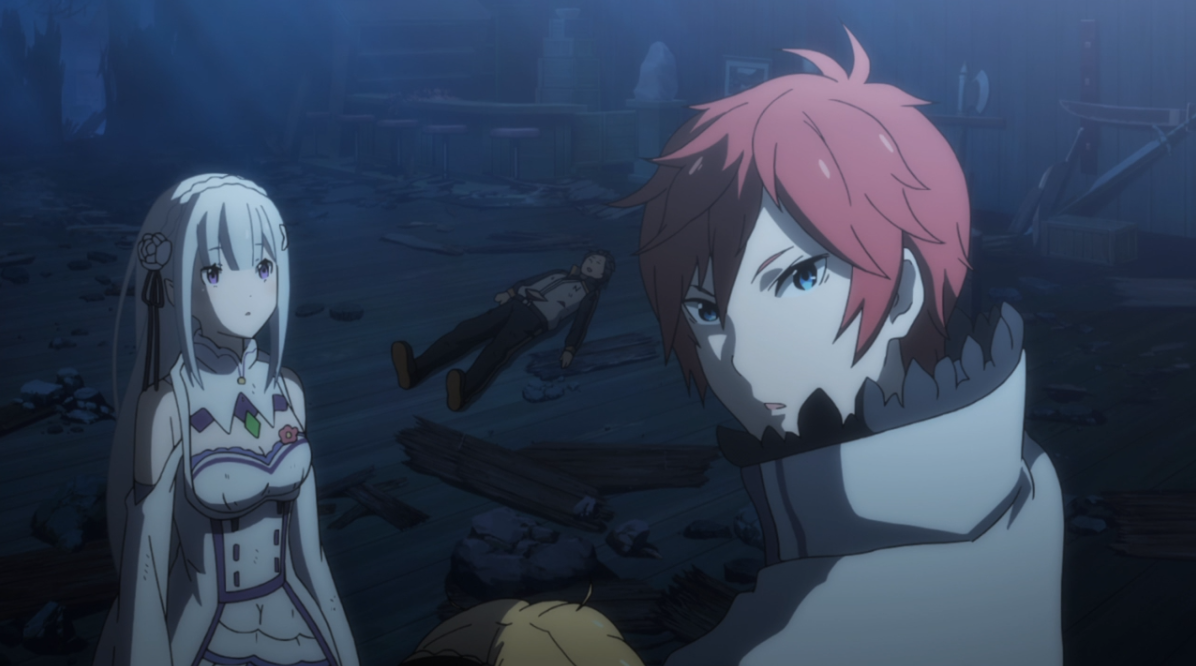 That's it for this week! There was the usual slew of mini time extensions, but none of significant length nor meaning.

1:10 The looping corridor scene is far more drawn out in the Director's Cut, which is an amusingly sensible spot to place a time extension. Just like the final observation from last week's episode, fading transitions are replaced with straight cuts. 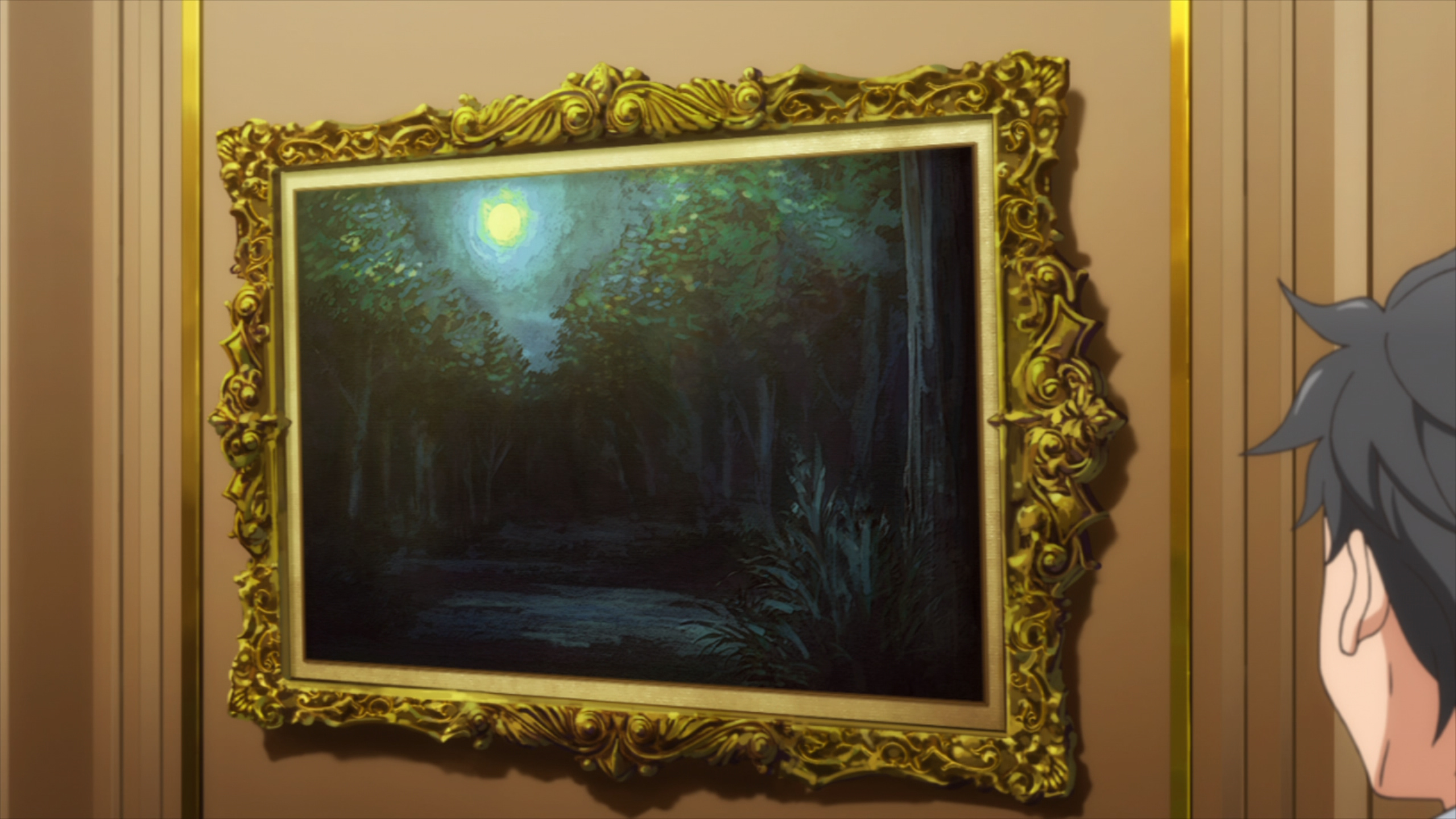 Unlike previous episodes where they were mostly the same, the subtitles on Crunchyroll have been altered significantly in just the first five minutes. Most of these are small, inconsequential changes like the example below. They even have new subs for the opening theme in the Director's Cut, but not the original. However, since this has nothing to do with the Director's Cut itself, I won't be commenting on them individually (believe me when I say there are enough changes there to fill an entire article).

22:55 Like last week, the overlaying end credits of the original are naturally removed in the Director's Cut. The same for the overlaying opening credits in the next episode/half.

49:05 Just as the killing blow is dealt, Subaru's blood splatters everywhere, But something new did catch my eye right before the curtain dropped. In the Director's Cut, we get a shot of his de-attached eyeball rolling away as well. This was originally updated in the BD version. 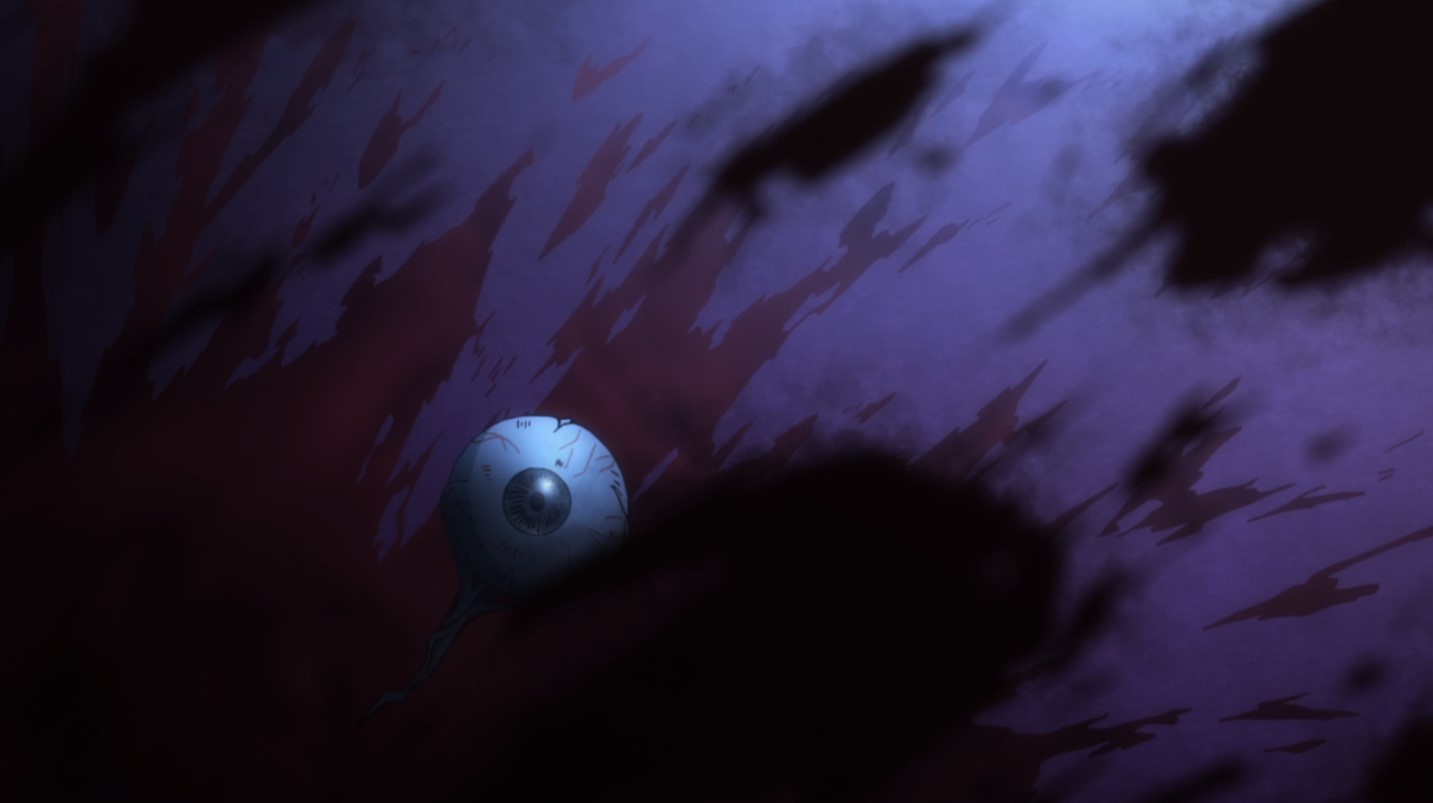 We've still got a while to go until we get to the good stuff, so that's it for this week. The drastic change in subtitles did make it very interesting to watch, though.