Things have gotten pretty fascinating in Diamond no Ace, with no small thanks to Ochiai. And this episode throws a few curve balls our way to keep us guessing! 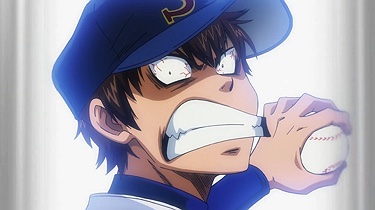 Damn, it all seemed to be going so well, too... 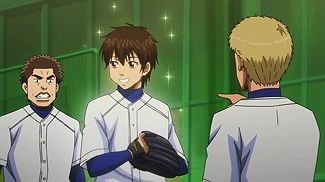 Well, that episode sure threw a curveball - and an unpleasant one if you're an Eijun fan. But we're kind of used to those at this point I suppose - misdirection is part and parcel of sports anime, and certainly a big part of Diamond no Ace's repertoire. Unfortunately so are three-minute recaps to start the episode - but I suppose there's no point in beating that dead horse. 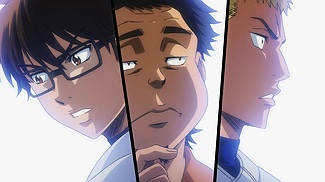 There were several striking and revealing moments in this episode, but one that especially stands out for me was when Miyuki asked Ochiai if he expected Eijun to pick up the changeup as fast as he did. Ochiai's hesitation said a lot more than his "of course". It's clear what his thinking was - "I can't lose either way. He'll probably self-destruct and be out of my way for good, but if he surprises me I look like a genius." 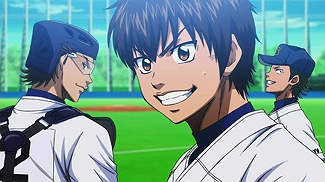 The inescapable fact, though, is that Ochiai in this sequence has proved himself a very shrewd baseball mind (we had hints of it already). His analysis of Eijun has been unerringly spot-on from the beginning - he knew what Eijun needed to lift his game (that was the easy part), but also exactly what sort of pitch would work best for him, and how to subtly push his mind in the right direction. Ochiai comes off at this point looking like something of an evil genius - he's great at reading people, knows baseball encyclopedically, but can't be trusted to use his powers for good. That sure is a hell of a lot more interesting than when he was just a troll and a saboteur. 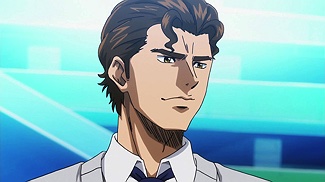 With Ochiai's advice to shift his weight fresh in mind - both good mechanics and a clever way to distract him from obsessing over the grip - Eijun gets immediate traction with the changeup. Because he's a naturally deceptive pitcher whose normal delivery runs towards unpredictable movement, the change is a perfect fit - he has both the mind and the body to excel. And indeed, in the right (left) hand the changeup can be several pitches - the so-called "circle change" Eijun starts off with, the palmball, even something close to a splitter. Each moves differently and travels at different speeds - and Eijun learns two variations well enough (one more or less a riff on his original moving fastball) that Miyuki is willing to show them off to Kataoka, and try them in a game. 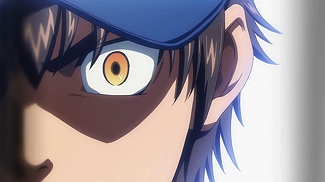 Oya is no pushover, but Seidou forces their ace Go-chan to show his hole card in the first inning - the shuuto. Eijun, by contrast, is pretty much rolling through the first relying on his inside-outside command, his four-seamer reaping the benefits of the weight-shift and grip practice he applied to the changeups. With two outs and the bases empty, Miyuki figures a 1-2 count is a perfect time to break out the changeup and take it for a test drive. 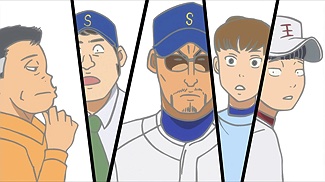 There are two schools of thought on this of course. You might want to consider not tipping your hand too early and giving Eijun more of a chance to settle in. But I'd be worried he'd be worried about when the first change was coming, to the point where it would be a distraction, and getting one over early would really mess with the opposition's heads. I think Miyuki made a defensible choice, but it turns out badly - Eijun throws a wormkiller about 52 feet, and his rhythm is completely broken. He walks the 3-hole batter, then the cleanup shocks the world by laying down a bunt for a hit. After a throwing error by Kanemaru (hilariously Shouji - from the bench - offers a "No comment" before the game starts) runners are on first and third. 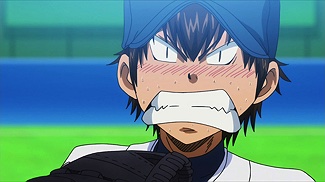 This is a high-tension situation all of a sudden, and I really hope Eijun doesn't totally self-destruct here, all the more since Chris is in the crowd, and I really want to see a warm moment between those two after a strong performance by Eijun. This is another test for Eijun, but I feel like he's gotten strong enough to be able to deal with this - and if he has a true meltdown that would represent a disappointing regression for his character. Here's hoping that doesn't happen.