7 Japanese Anime Fan's Netspeak That You Should Know

We all know English netspeak slang from living all our lives online, but are you familiar with these Japanese terms? From the Japanese version of LOL, to other more niche sayings, come learn some more Japanese you'll probably never use!

笑う (warau) is to laugh in Japanese, and 笑 is just a shortening of it. Even shorter is just a w, which is both the first letter in "warau," and sort of looks like a smiling face. Much like "LOL," "w" can be repeated as much as you like for a "LOLOLOLOL" effect.

So if you've ever seen a NicoNico video with w's streaming across the screen, you'll know they're having a grand 'ol time. 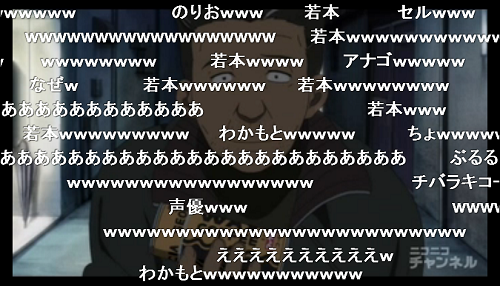 We've all heard of people getting into ridiculous situations, such as getting a surprise fiance, having a harem of girls confess to them, or making out with their teacher.

Whether they're true or not, those lucker dogs live the lives of main characters from romance/erotic games known as eroge. That's where "sneg" comes in; it's short for それ何て言うエロゲ, (Sore Nante iu Ero Geemu?)
The conversation should go something like:

"Holy crap, my childhood friend I haven't seen in 10 years is back, and I think she's flirting with me!"

"Nice man, what visual novel is that from? (sneg)?"

Meaning "(own) home security guard," it's a euphemism for shut-in NEETs. As in, the reason why you're home all the time is because you're such a diligent guard for your house.

This phrase is so popular there's even a song about it! "Ggrks" is short for "gugurekasu," which translates to "Google it yourself, you useless person."

English has an equally snarky equivalent, let me Google that for you

Ria jyuu probably translates most to "normie," someone who maybe isn't particularly geeky, but most of all, is satisfied with living what society considers a "normal" life with "normal" social interactions. Ria jyuu have friends, have a job they more-or-less enjoy, go out for drinks, and date.

It's not uncommon for people who consider themselves geeks or otaku to masquerade as ria jyuu.

Popularized on the Japanese forum 2chan (like 4chan but in Japanese), nanashi-san is the Japanese equivalent of "Anon," and literally translates to "No-Name-san," "san" being an honorific you use with people you're not super familiar with. But you already knew that last bit, I bet.

Celebrating anime birthdays is the perfect way to cross the boundary between reality and fiction. But what about your special day? How wonderful would it be if you could celebrate your birthday with a lovely character who shares it? Come meet your anime soulmate!