My Neighbor Totoro is a well known movie created by Ghibli master, Hayao Miyazaki. After its premier in 1988, and its Western debut in 1992, children all over the world began to fall in love with its cute animation and vibrant colors. It was, and still is, an inspiration, as it has grown into the hearts of many as a childhood classic. However, with every innocent favorite, there comes a dark twist.

A cute creature, or the God of Death? 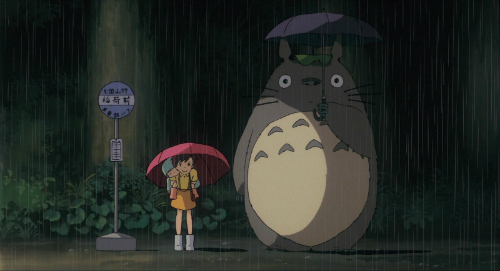 There are many legends that revolve around My Neighbor Totoro, but one of the most well known is that Totoro himself happens to be the God of Death. According to legend, people who are close to death can see a certain apparition called the God of Death, which implies that Mei is close to death the entire course of the movie. Whenever she falls into the river and her sandal is seen drifting afloat, it actually means that she drowned to death. Unable to face the truth of her sister's death, Satsuki goes on a desperate hunt to find this mysterious Totoro to plead for Mei's life. Basically, Satsuki opened the doors of death herself with only sheer determination on her sister's behalf. At the very end of the movie, the only person who is able to see the girls is their mother. Since she is the only one able to see them, that means she is close to death herself. To top this off, in the ending scene, neither of the two girls have their shadow, something that every living person has. However, the dark theory doesn't quite stop there. There is an infamous murder case called The Sayama Incident in which a school girl was kidnapped, and eventually killed by her kidnapper after the police used fake money to try to get the girl way from the man. It was her sister who was instructed to give the kidnapper the fake money, and she eventually killed herself from the grief of failing to get him to take the bribe. According to rumor, before committing suicide, the older sister saw the apparition of a cat appear before her. However, this rumor has been debunked, and was probably attached to Totoro's God of Death theory upon it gaining more public attention. There are also strange facts about the Sayama Incident that connect it to My Neighbor Totoro. One example is that the incident took place in May. The two main characters of the movie are named something revolved around this month: "Satsuki" means "May" in Japanese, and "Mei" is pronounced like "May". Not to mention, the movie takes place in the Sayama Hills, whereas the murder case took place in Sayama of the Saitama Prefecture. The picture to the left shows a sign that can be found in Sayama Hills, showcasing the infamous Totoro. These connections are quite overwhelming, although the accusation that the movie is placed around this incident is still a bit far fetched.

Lots of fans are upset about this theory, especially since My Neighbor Totoro is usually considered a heartwarming anime classic. However, while many believe this is a gruesome theory, they don't realize that the God of Death isn't meant to be so scary. Any purpose of a God of Death is to peacefully take the person away from their life. They are there to create solace for the life that was left behind. If anything, Totoro would still look and act exactly the way he is portrayed, especially to the two children, Mei and Satsuki. This theory was completely debunked by one of the producers of My Neighbor Totoro, Toshio Suzuki. He claims that the theory isn't true, and the reason that the girls do not have shadows in the end scene is because the animators did not want to spend the extra time on something that wasn't necessary to the movie. However, despite this theory being debunked by one of the creators, the internet still believes it to be true. The theory conveniently fits the plot of the movie and can even tie up loose ends for those who don't quite understand the ending of the movie. Whatever truth be, the fact that people are talking about this amazing animated film in depth is the only fact that truly matters. Because let's face it, nothing sells like controversy.