A Date with Destiny: Cause and Effect in Boku dake ga Inai Machi

The new anime Boku dake ga Inai Machi (Erased) is the smash hit of the 2016 winter anime season. It expertly handles a cause and effect motif in a way that makes it hard to stop watching and impossible to ignore. Let's explore the intricate central theme of this beautiful anime.

What role does the theory of cause and effect play in anime? The new anime Boku dake ga Inai Machi (Erased) digs deeply into a literary feature that most anime hint at, but that few truly explore: cause and effect. In every story, characters commit to actions that have deep and profound consequences in the long run. This is how stories are written. This is how history is made. Cause and effect is, in essence, a law of the universe. It’s no surprise, then, that all good anime utilize cause and effect to some degree, with others deploying this necessary consequence of life better than others. A hero who accidentally falls on top of the girl he loves in the first episode has invariably set in motion a chain of events that will lead to their budding romance throughout the series. A heroine who submits to the requests of a random stranger by accepting a mysterious gift soon finds herself whizzing down the dangerous, yet glamorous path of a magical girl.

Cause and effect is a central theme in Boku dake ga Inai Machi. 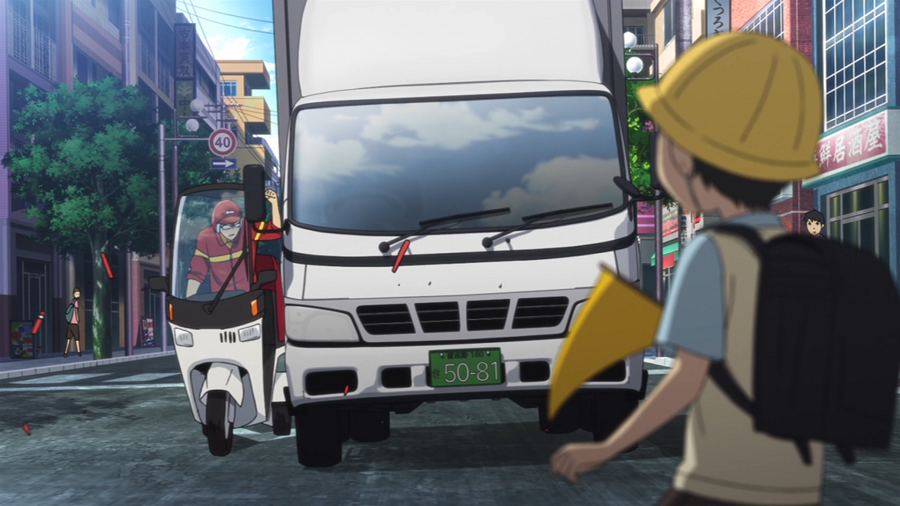 But for most anime, cause and effect is used solely as a plot device. It exists in anime because it has to exist. One action (cause) must at all times lead to some consequence (effect) that is generally out of the character’s control once that action has been made. But what if you could change the way things turn out? What if the mistakes you made could be undone? What if you had a second chance at the cause? Boku dake ga Inai Machi explores this idea in dramatic detail. The main character, Satoru, has a power that he calls “Revival”. We’re never told (at least, up to this point), how he got it or how long he has had it. What we do know is that it happens without his control. The world goes grey around him. A blue butterfly flutters across the sky. A severe and almost dizzying sense of déjà vu sets in. With that, Satoru suddenly finds himself several minutes into the past, with an opportunity to change something that went wrong. A chance to fix something that he somehow missed the first time around. To use his limited human strength and alter the past to make things right in the present.

The complex ideas of cause and effect are hard to pull off in anime. Exploring cause and effect is a risky game for an anime. It raises a lot of questions regarding continuity as well as realism. Discussing realism can be a bit tricky when it comes to anime, but it’s something most viewers take for granted. We want characters who act in realistic ways, but who are also larger than life. We want their actions to have realistic consequences, but we want those actions and consequences to be overly dramatized. That’s why we watch anime. But then there’s that small, enduring hope that it could happen to us, that we could be the hero, the lover, the fighter - it’s escapism at its best. But to change past actions to affect the future? That’s something that we all want. That extends beyond mere escapism, into a strong sense of longing. We’ve all made mistakes in the past that have had negative consequences on our present. We all want to go back and do it all over again. This is why Boku dake ga Inai Machi is a high-risk venture for an anime. The actions Satoru takes to change the past and effect the present have to be extremely believable. There’s a high litmus test an anime of that nature must pass that most anime don’t have to.

Realism matters, even in the fictional world of anime. Boku dake ga Inai Machi is only several episodes in, but it hits the right marks for realistic fiction. Yes, the main character Satoru goes back into the past. That’s not entirely realistic, especially considering the anime has, to date, not provided any scientific explanation for it. But the emotional drama the anime creates feels frighteningly real. The situations Satoru has to face are at times too familiar. But the way he goes about trying to change the past makes absolute sense. It also plays deeply on his psychological state. There’s a significant amount of stress involved in changing the past. The way a character deals with those stresses and the psychological impacts of them has to be particularly convincing. Steins;Gate is a perfect example of this. The anime focused on time travel, but in essence, explored the same theme as Boku dake ga Inai Machi. It answered the same questions. Can you change the past to bring about a better outcome for the present? It should come as no surprise, then, that the two anime have found similar ratings and popularity. In a way, Boku dake ga Inai Machi feels like a spiritual successor to the popular time-travel anime. Only, it strips away the technology and the humor, focusing on the drama that is part and parcel to playing a dangerous game with destiny.

Boku dake ga Inai Machi (Erased) plays to our strong desires to fix the things we did wrong. The opportunities we missed. The failures we so desperately would like to erase. But it also prods at us with that question that we purposefully ignore, that we don’t even want an answer to: can we ever truly contend with fate?