Ansatsu Kyoushitsu ("Assassination Classroom") is a school comedy which was first serialized as a manga in 2012. Simply put, it's about a classroom of underachieving children who are given the task to assassinate a genetically modified super-being (aka. Koro-sensei) before their graduation in March the following year, otherwise the Earth will be destroyed. This series is about more than a class full of students trying to assassinate their teacher however. It paints an idyllic picture of the kind of education (and teachers) many of us probably wish we had. Namely, an education where students' likes and talents are nourished.

Teachers who can tailor learning to the individual are few and far between. Time constraints make it impossible for the average person. While Assassination Classroom underlines Koro-sensei's personal education as the best for students, there is not so much positive light shed on the opposing cram school style of education popular in Asian countries. Western viewers may not understand the significance of these two clashing systems though - they may even have misguided ideas about the latter. Compared to Western countries, the Japanese school system is far more strict and focused on performance. Although it's possible to still enjoy Assassination Classroom as a high school comedy and nothing more, the content of this series will carry more significance if one is aware of the cultural difference.

With all that said, let's examine the features which make this series have more than comedic value!

Teachers taking on a class of so-called failures and delinquents is not a new narrative trope in media, be it Western or Japanese (e.g. To Sir, With Love [1967]). The fact that it's become a theme speaks volumes about the wish we have to make education relevant to all students. Koro-sensei may be the most obviously non-human of the titles listed below, but he isn't the only teacher who uses unusual methods of education. 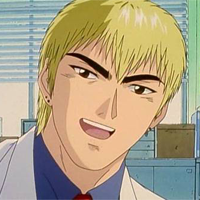 Eikichi Onizuka (Great Teacher Onizuka [1999-2000]): Coming from the roughest background one can imagine, Onizuka schools his pupils with a heavy hand. He's not afraid to bend a few rules to drive home his lessons either. While teachers are supposed to be upstanding moral pillars, this former delinquent manages to connect with his pupils by being able to empathise with them. 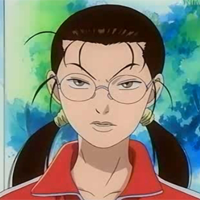 Kumiko "Yankumi" Yamaguchi (Gokusen [2004]): Heir-apparent to the Ooedo family, a prominent yakuza group, Yamaguchi's dream is to become a respected teacher. By necessity she has to hide her background and upbringing from both school and students. However, it's not that easy when one's class is full of misfits. She ends up supporting her students from the shadows with strength developed as a yakuza clan heir whilst pretending to be an average, clueless teacher. 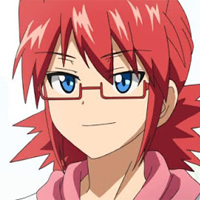 Junichirou Kagami (Denpa Kyoushi [2015]): Kagami's class of students aren't problem children as such, but his approach to teaching is hardly normal. As someone who can only "do what he feels like doing", Kagami is bored by day-to-day lessons and only finds motivation to teach students when he sees them in trouble. By throwing aside the formal student-teacher divide, he manages to connect with pupils through his haphazard methods.

What's interesting about the examples above is that the teachers don't command respect because of their status. They bring themselves down to the students' level and earn respect through their actions. Bear in mind: the heavy hierarchical structure in Japanese society makes the breakdown between student and teacher more prominent.

So, how does Koro-sensei measure up against these examples? As an assassination target, he subverts the relationship between himself and his pupils by simultaneously existing as a person they ought to respect and also as prey whom they need to hunt. It's a situation which brings him closer to them and allows him to tailor their learning towards their eventual goal of killing him. 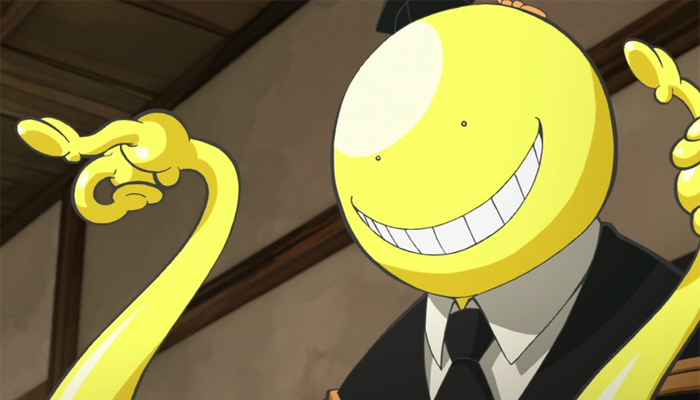 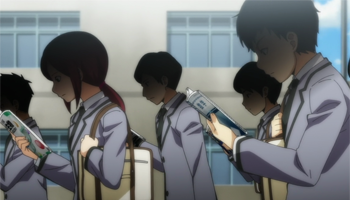 There are two models of education shown in the series. One is based around active, tailored learning; the other reliant upon rote, uniform learning. The active learning approach taken in Assassination Classroom uses assassination as a way for Koro-sensei to convey lessons to his pupils. They're encouraged to focus on killing him, to learn and improve upon their constant failures. Thus, their growth comes with a sense of progress. On the other hand, students on the main campus are forced to study hard for no reason other than to gain higher grades. Failure is seen as something to fear; their grades are a means to an end. Many of those students are shown downtrodden and anxious from their academic burden－even more so than Koro-sensei's class.

Koro-sensei's class is class 3-E, otherwise known as the "End Class". Over the course of the series they become a force to be reckoned with. In the beginning, they're weighed down by the thought that their various blunders have brought them together. However, once they're tasked with assassinating their teacher, the students learn that one failure is not the end of the world. Failure is a means to learn from mistakes, correct those mistakes, and make another attempt with those corrections in mind. As their target, Koro-sensei teaches them to never give up in their attempts, to learn to polish their skills individually and then utilize them in cooperation.

Not only does he manage to tie their attempted assassinations to the learning process, each student has his or her talent nurtured by him. For example, Tomohito Sugino is a former baseball pitcher who tries to throw an anti-teacher BB-studded baseball in his assassination attempt. While at first he tries to emulate a famous player he respects, Koro-sensei helps him find a style of pitching which suits him better. There is also Manami Okuda, an avid but extremely shy chemist, who tries to develop an anti-sensei poison. Koro-sensei deceives her into making him a tonic that improves his fluidity, using his deception to teach her the importance of communication. 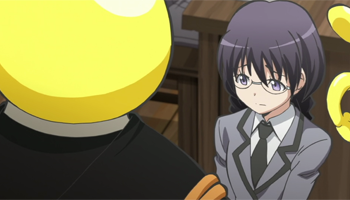 Okuda: "Y-You tricked me, Koro-sensei!"
Koro-sensei: "Having the verbal aptitude to deceive others is a vital part of assassination, Okuda. (...) Even the most potent of poisons is wasted if you offer it in such a naive way that your target can take advantage of you."
-- episode 5

By supporting their interests, Koro-sensei manages to engage his pupils in their classwork - albeit in an unconventional way. Such an education is rare in public educational institutions (and many private ones as well) due to the time and effort needed. It's only possible for Koro-sensei, who is so impossibly fast in work that he can act as a personal tutor to all of his students simultaneously. 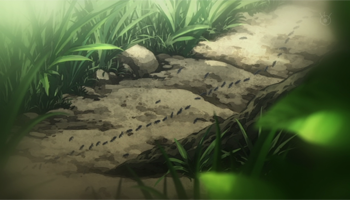 In sharp contrast to class 3-E, we have the main campus students. Gakuho Asano, chairman of Kunigigaoka Junior High, believes in a worker ant model of education. Worker ant colonies have been found to consist of 20% hard workers, 60% average workers, and 20% idlers. However, the chairman's ideal is one where 95% are hard workers and the last 5% are idlers. Class 3-E, in his model, serves as the bottom 5% which spur the other 95% to success. It therefore doesn't matter to him how the 95% of his students achieve their education, whether they truly absorb and understand the information they force themselves to ingest. Nor does it matter what kind of people they become as long as they are "strong" in success.

The result is heavy discrimination against class 3-E. Those who are "gifted" with intelligence and physical ability believe that their natural position is to be on top of the talent pyramid, while anyone else belongs beneath their heel. Anyone who slips below standard is seen as inferior and mocked. Those on top thus fear to be dragged to the bottom, which motivates them to work hard to maintain their status. Meanwhile, those at the bottom are constrained by mental shackles which weigh them down with the idea that they will never be successful. It's a cruel way to maintain the divide between "strong" and "weak" and is completely at odds with Koro-sensei's philosophy. 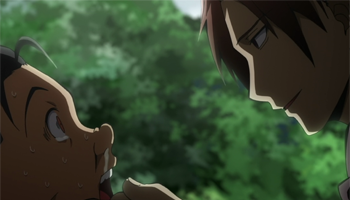 Gakuho Asano: "Mr Takaoka, your lesson was dull. Yes, fear is a must in education. But a teacher who can only instil fear through violence is a teacher of the lowest order indeed."
-- episode 13

That said, Asano does not despise Koro-sensei's methods. In fact he used to be a similar educator, taking the time to nurture his students' individual talents. Perhaps that is why he comes to tolerate Koro-sensei's methods after 3-E proves themselves against him repeatedly. While their success threatens the structure of his school, he appears to accept that between himself and Koro-sensei they may be able to do the best by their students by allowing their respective strategies to coexist.

In spite of expectations, 3-E's turnabout success means they can't truly be called the "end class" any more. The class' original moniker came about because being placed there was seen as an end to a student's academic aspirations. The environment is likened to a pit of muck with sheer walls that are almost impossible to climb. Anyone who could manage to crawl out was rewarded by being allowed to return to the main campus. Such was the carrot dangled in front of those in 3-E, but with the advent of Koro-sensei, their isolation and close-knit circumstances became an advantage in learning.

What began as a classroom designed to take and hold a portion of students who had given up on their futures became an environment where anyone can achieve their dreams with enough perseverance. Class E demonstrate time and again that they are able to beat the depressing mindset which keeps them from showing their true potential. Encouragement and self-confidence allow them to perform just as well as their peers - sometimes outperform - when it comes to exams. In the end, the larger message this series tells is that positive thinking wins out over negativity. While hard work is undeniably part of the struggle of success, a positive attitude can go a long way to helping someone achieve a goal, regardless of latent ability.

Education, after all, shouldn't be about loss or success. It should be about becoming a better person. 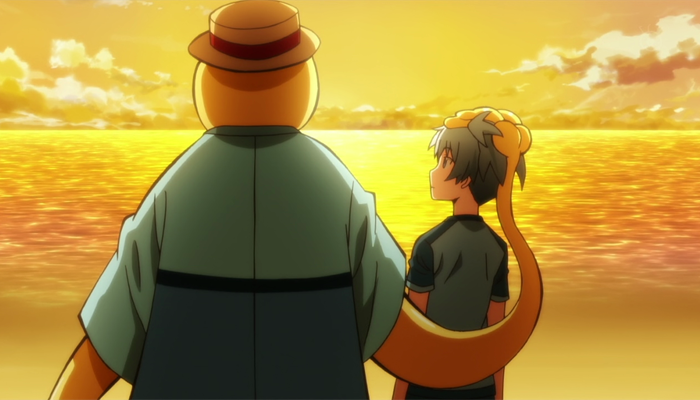