When you think of gay anime characters, you probably think of yaoi and yuri, but great LGBT anime characters can be found in other genres. Learn about the history of sexuality and gender in Japan, how their attitudes differ from the US, and which LGBT characters challenge stereotypes.

How have LGBT anime characters evolved throughout history?

The state of LGBT (Lesbian, Gay, Bisexual and Transsexual) representation in anime differs from that in American cartoons due to different cultural attitudes regarding sexuality and gender identity. In the West, homosexuality has historically been considered sinful, and for much of the 20th century, mainstream film and TV avoided directly addressing the existence of non-heterosexual identities. By the 1990s, there was more gay representation of varying quality in American movies and TV aimed at adult audiences, including gay characters in adult-oriented cartoons such as Smithers in The Simpsons and Big Gay Al in South Park, but the issue was still considered too controversial for media aimed at children, which restricted most American cartoons. As same-sex marriage has become legalized nationwide and transgender issues are also beginning to be better understood by the public today in America, there's been a slow but steady increase in LGBT cartoon characters including those marketed towards younger audiences. Notable characters in the current movement include the pairing of Korra and Asami in The Legend of Korra, the pansexual genderfluid robot BMO in Adventure Time, and the "gay space rocks" who make up much of the cast of Steven Universe. 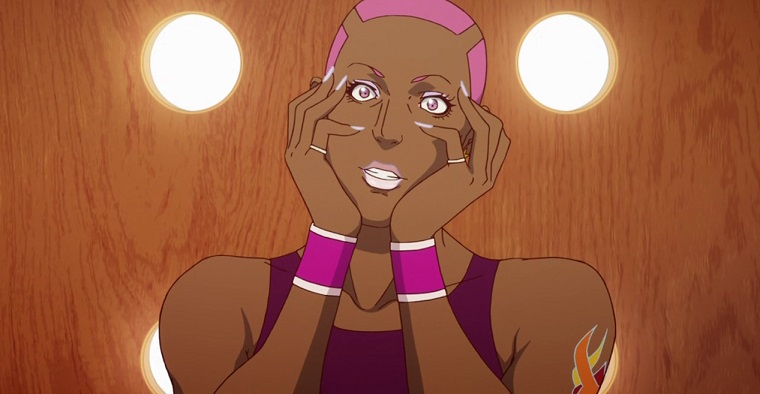 "I am an LGBT anime character and I am proud of it!" - Nathan from Tiger and Bunny

Japan, in contrast, hasn't historically considered homosexuality sinful. It has, however, been very concerned with social conformity, which is the form homophobia tends to take there. Before the Meiji restoration, socially accepted outlets for same-sex relationships existed among the samurai and the culture of kabuki, but it was still expected that everyone enter a heterosexual marriage. Westernization led to the importation of both the homophobia of late 19th to early 20th century psychology and the gay pride movement of the late 20th to 21st century. LGBT rights are not included as part of Japan's civil rights law and same-sex marriage is illegal, though as of 2015 Shibuya and Setagaya have begun to recognize certain rights for same-sex couples. You can find lots of LGBT anime characters, including those in shows aimed at kids, but many of these portrayals are highly stereotypical. 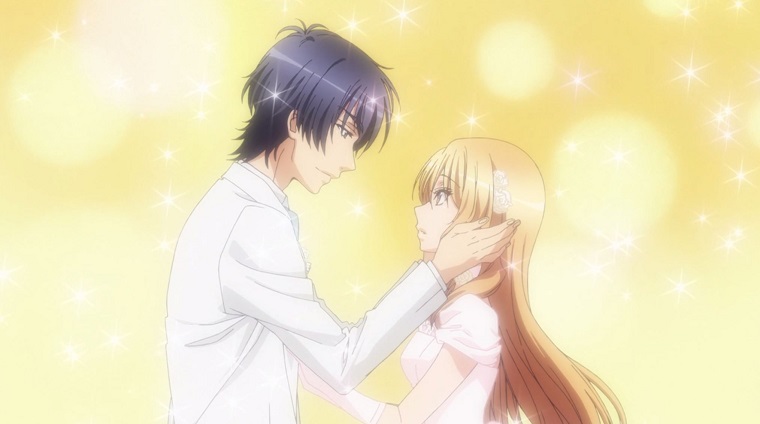 Ryouma and Izumi from the BL anime Love Stage may not be on this list, but they are still a lovely LGBT anime couple!

The characters in this list provide some of the more positive examples of LGBT anime characters. You're not going to see your typical yaoi/shonen-ai series on this list, as that genre almost as a rule tends towards very unrealistic representation (FreeNightFalls recently wrote about the appeal of the genre here). Similarly unrealistic, magical gender transformation shows like Ranma 1/2 aren't being counted as trans representation. Yuri/shoujo-ai is a bit less rigid as a genre, and at least one of the shows discussed is often classified as such but is notable for avoiding some of the genre's more common and problematic tropes. There's no bara because I honestly don't know of any animated bara and also it is mostly all hardcore porn. Some of the listed characters' genders and sexual identities are left more ambiguous than others, so in such cases I explain why these characters are commonly read as so.

These LGBT anime characters portray their sexuality and/or gender in an inspiring and positive way! 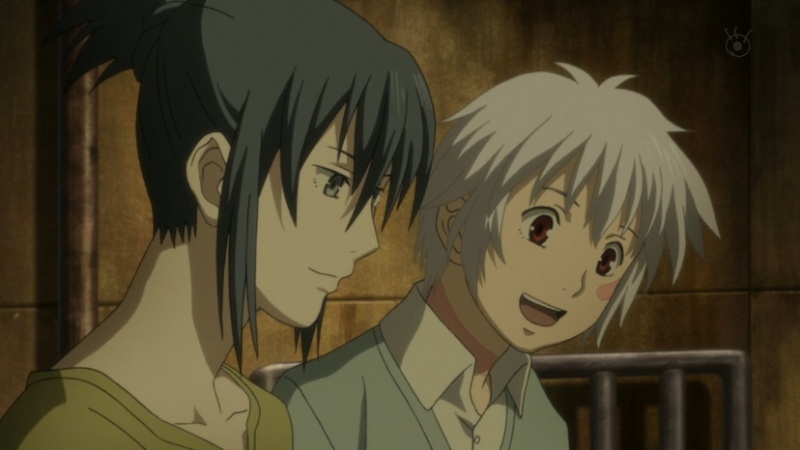 GuardianEnzo has already written about how quietly revolutionary No.6's casual integration of a gay romance into a sci-fi thriller series aimed at general audiences is. 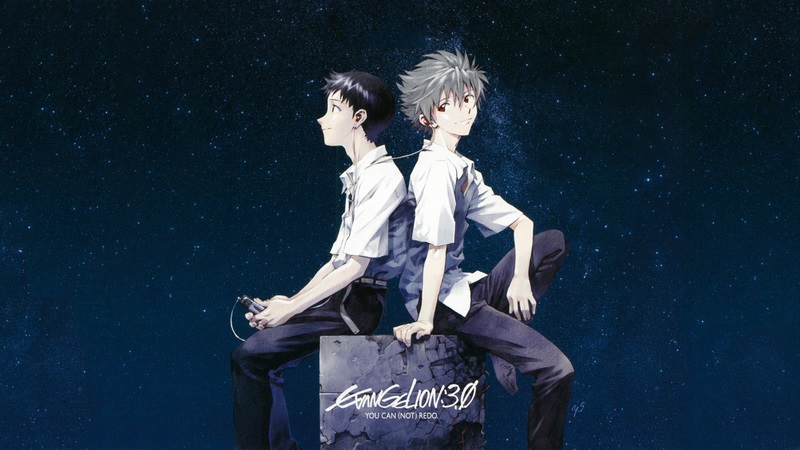 Though as far as including same-sex romance in popular sci-fi anime goes, you can't get more popular than Evangelion! Kaworu only appeared in one episode of the original TV series, but this mysterious romantic made an instant impression, while Shinji, who up until that point had been very unsuccessful in his relationships with women, found momentary happiness with Kaworu before Evangelion did its thing and made heads explode.

From: Tiger and Bunny 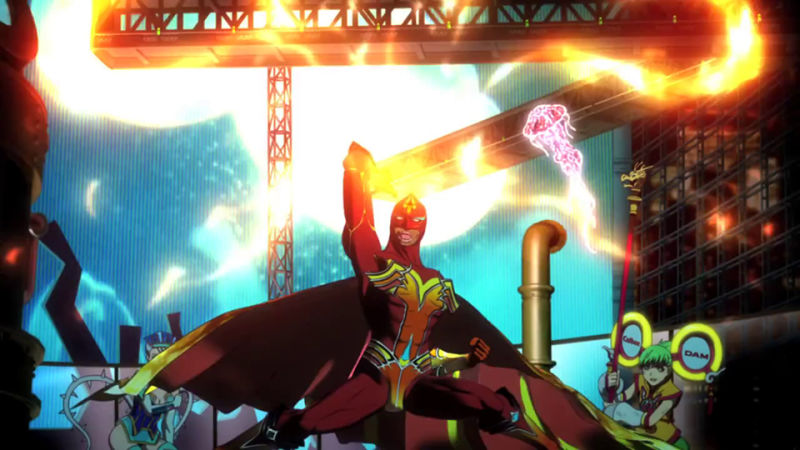 When Fire Emblem was first introduced, I was worried they'd fall into the ugly stereotypes gender-nonconforming and gay anime characters sometimes do (see how the usually hilarious One Punch Man made Puri Puri Prisoner one big unfunny rape joke). But while Fire Emblem fits some stereotypes (they're "flaming", literally), they're as strong and upstanding a hero as any, and the main message of the plot in the sequel movie basically amounts to "queer people are the best!" 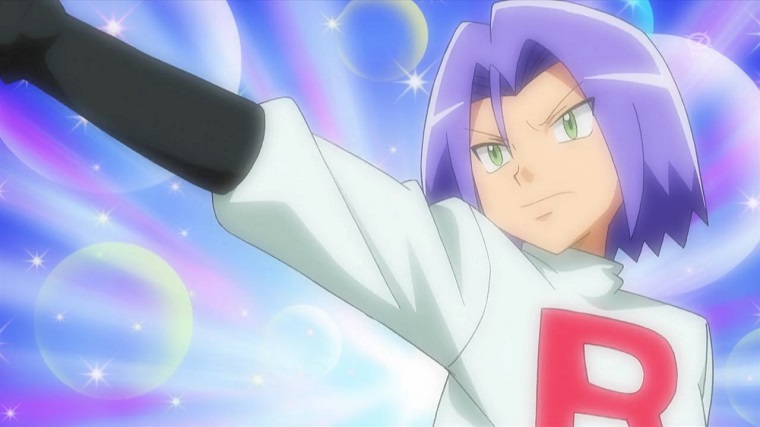 Anime fans, being a ship-happy bunch, have probably theorized that EVERY anime character is secretly gay at some point or another. But James (Kojirou in Japanese) of Pokemon's infamous Team Rocket pings off more people's gaydars than most. At the very least, the guy sure loves to crossdress, and the dub writers, typically heavily restricted by censorship, loved to sneak in double-entendres. 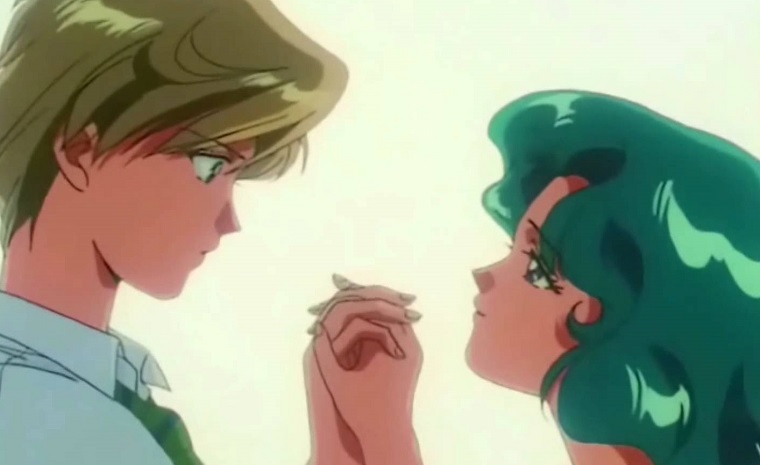 More typically, dub writers for '90s childrens' TV censored out gay references rather than enhancing them, which led to the stupid decision to make the Sailor Stars' power couple "cousins." Sailor Moon was one of the first mainstream anime series to feature lesbian heroes (OnnaKawaii wrote more about homosexuality in Sailor Moon here), and director Kunihiko Ikuhara would go on to further explore queer themes in anime. 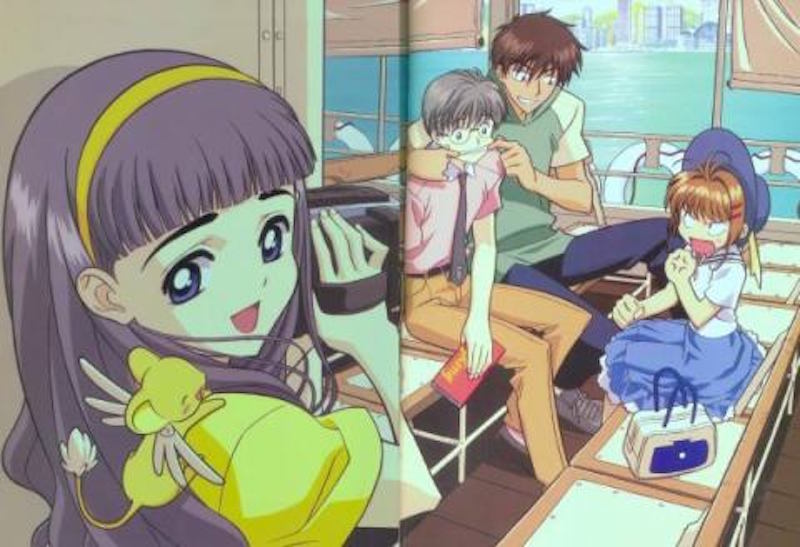 CLAMP started off writing yaoi doujinshi, and have continued to include gay characters in their stories as they've become manga superstars. In this magical girl series, Tomoyo has a serious crush on her friend Sakura, and Touya and Yukito are officially a couple. 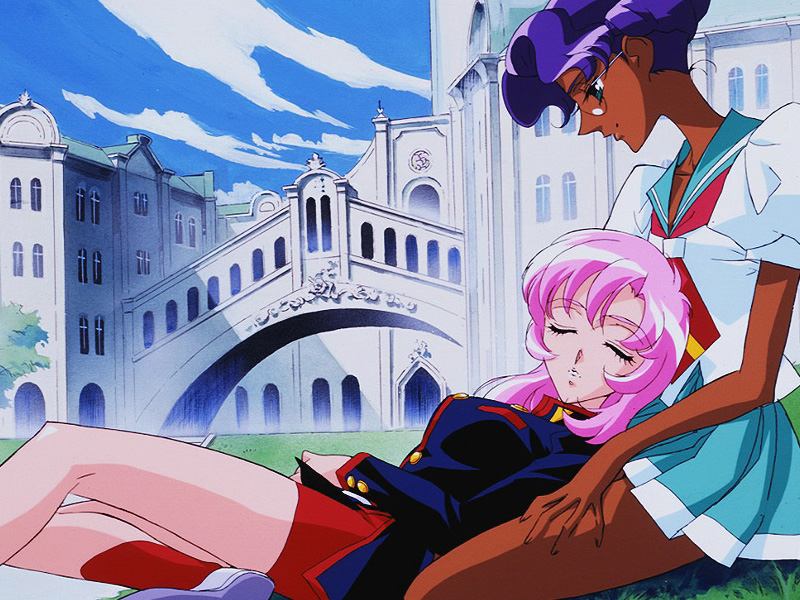 Yuri/shoujo-ai commonly comes in two flavors: "tragic lesbian" stories, where same-sex attraction ends with death and/or high school graduation in the model of early 20th century "Class S" Japanese literature, and more fanservice-driven series, aimed at straight men as yaoi/shonen-ai is at straight women. Ikuhara's Utena, often considered one of the best yuri/shoujo-ai shows, fits neither mold. The central romance is between duelist Utena and her accidentally engaged "Rose Bride" Anthy, but pretty much every character in the show is allowed to swing both ways without expectations of enforced heterosexual marriage (Juri Arisugawa, one of the only straight characters in the manga, has a female love interest in the anime).

From: The Melancholy of Haruhi Suzumiya 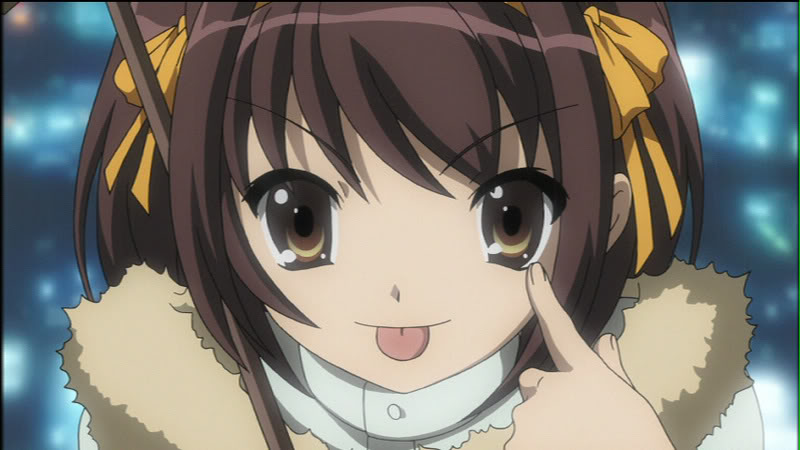 In the first (chronological) episode, the ever-outspoken Haruhi responds to a question about what she looks for in a partner by saying "...as long as they aren't an ordinary human, it doesn't matter if they're male or female." I've paraphrased that line a lot... 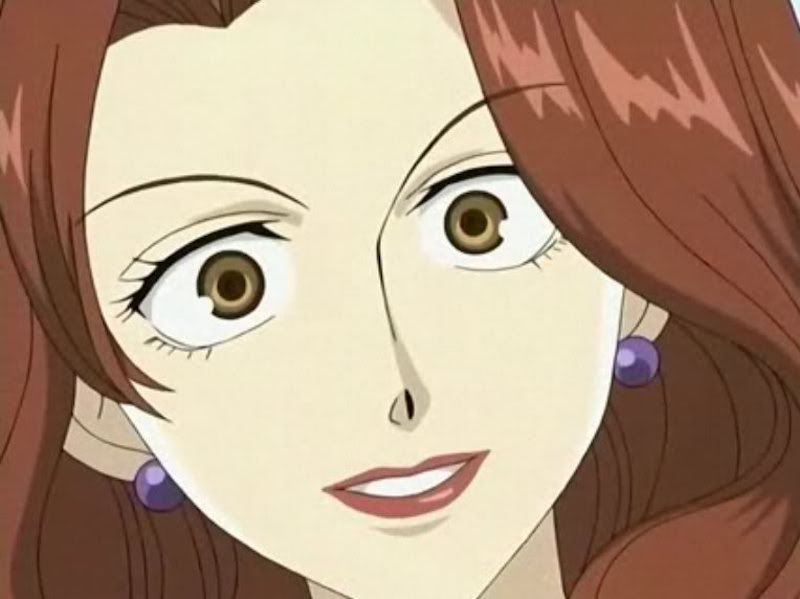 While the other Haruhi from a big hit 2006 comedy anime does have a way with the ladies, it's not clear enough if she has any attraction to them to qualify her for this LGBT anime character list. Her drag queen father, on the other hand, certainly does. He loved Haruhi's mother so much that when she died he felt he couldn't possibly love another woman the same way, and has since focused on his attraction to men. 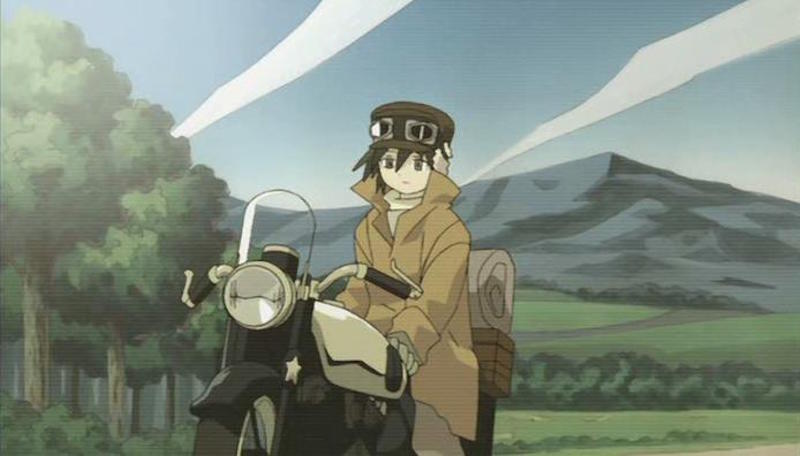 Kino is by nature a mysterious protagonist, not revealing anything personal. We do know that Kino is a "they" and that they were raised as a girl, but abandoned their old life and their old name, taking their new name from a male traveler they made a connection with. They dress androgynously, mostly using masculine pronouns for themselves, and correcting both those who call them "boy" and those who call them "miss" by simply stating "I am Kino." As such, they seem to be somewhere on the genderqueer spectrum. 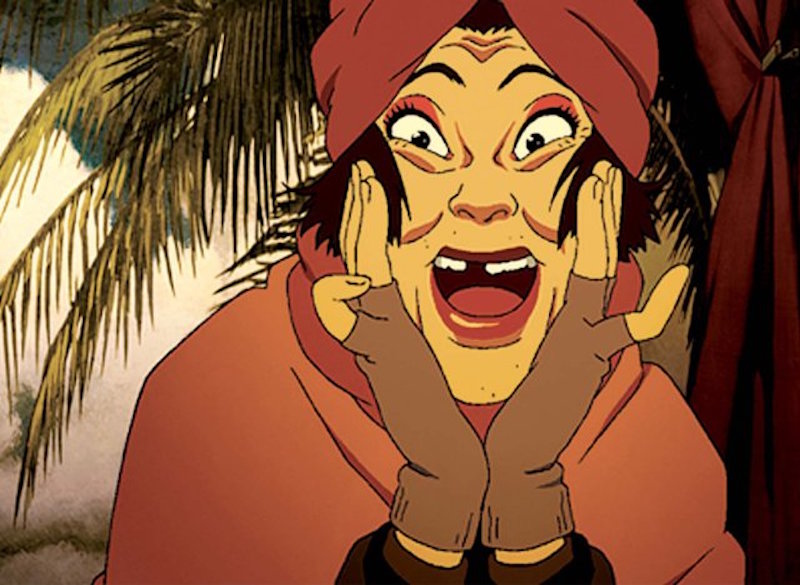 A homeless former drag performer with a bit of a temper and a deep religious faith, Hana is in many ways the heart and soul of the make-shift family that's the focus of Tokyo Godfathers. Never knowing her real parents and sad that she'll never be able to bear children herself, she's ultimately rewarded for her heroism becoming one of the godparents of an adorable baby. 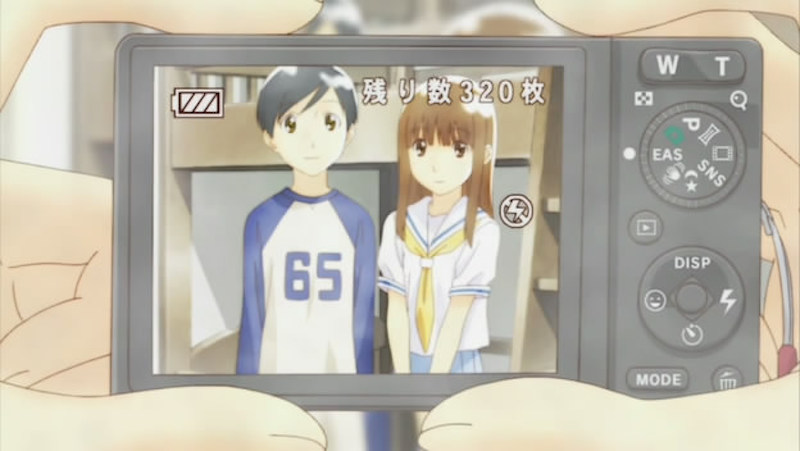 Wandering Son is a realistic coming-of-age story focusing on two transgender adolescents, Shuuichi (male-to-female) and Yoshino (female-to-male). Shuuichi's friend Makoto is also a closeted trans girl, while the fully-transitioned trans woman Hiroyuki serves as an adult mentor to Shuuichi and Yoshino. Note the anime only covers a sliver of the manga, and Fantagraphics is still unsure if they'll continue translating the manga in English past volume 8 due to low sales, so if you want the full story released you might want to consider raising those English manga sales numbers. 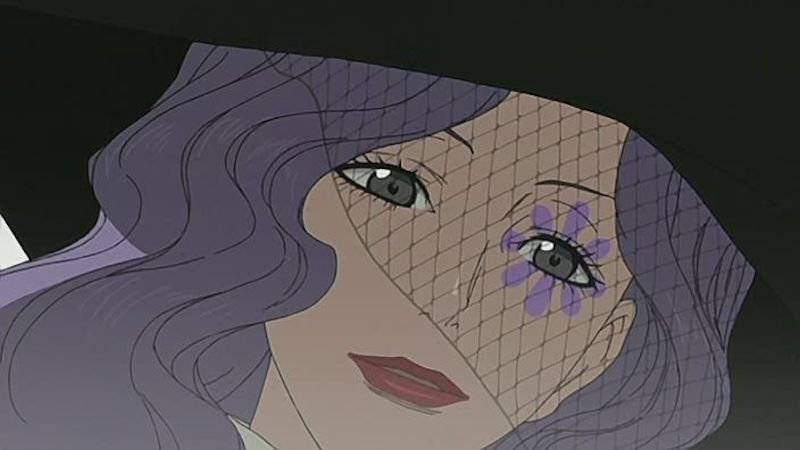 Elegant and feminine, Isabella found acceptance as a trans woman from George Koizumi, and together they started the Paradise Kiss fashion brand. 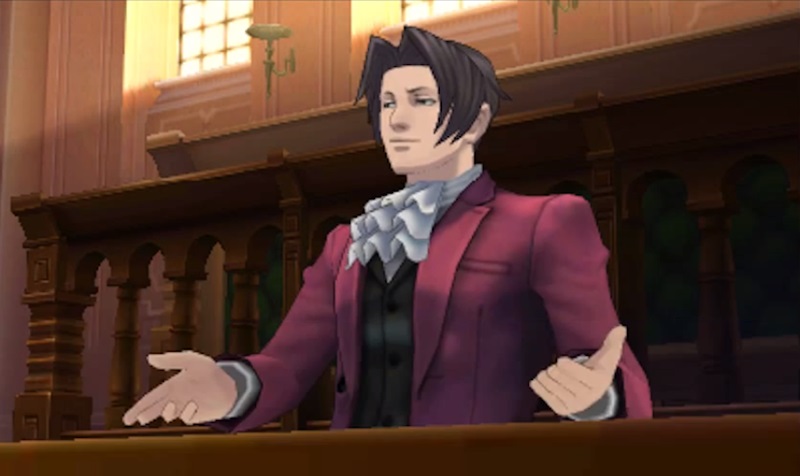 We know for a fact that the top prosecutor in the popular video game series (soon to be adapted into an anime) isn't interested in women. Either he's the next great gay anime character (there's certainly implication of some sort of feelings towards Phoenix Wright) or he's asexual (an under-represented often misunderstood orientation in and of itself). 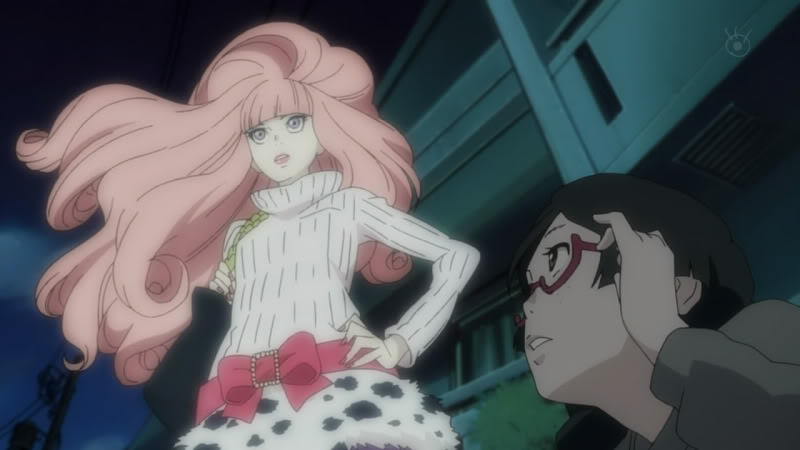 Kuranosuke is a straight cisgender man, but deserves mention on our LGBT anime character list as a character that challenges stereotypes about gender expression and identity. He's completely secure in who he is and he constantly rocks women's clothing. While tomboy characters are plentiful, male crossdressers remain often stigmatized and misunderstood, making Kuranosuke a very positive character.