What makes a great anime villain? So what makes a great anime villain? There's no single answer to that - and I think that's reflected in the list below. Sometimes a great villain can be great because they're flat-out evil - their menace carries them over the top. Sometimes it's simply someone you love to hate. But there are also antagonists that are special because of their sheer charisma, and because they're so complex and difficult to read that we can't quite figure out what we feel about them. Anime is full of great villains of every stripe, and here are some of the best anime villains as far as I'm concerned:

The Best of the Worst Anime Villains The recent news that Ajin was getting a second season was certainly welcome, not least because it gives us another opportunity to follow the exploits of the Man in the Hat. In the tradition of characters such as Tywin Lannister, Satou is a magnificent bastard – undeniably a sadistic psychopath, but a massively entertaining one. Adding some spice to the recipe is the fact that he’s been faced with such massive injustice in his dealings with humans that Satou’s actions might almost (but not quite) seem justified.

I admit that when Midousuji-kun joined the cast of Yowapeda, I wasn’t impressed. In fact I thought he was bringing the show down by giving us a conventional villain and undercutting the sense of realism. But Midousuji grew on me in a big way, in part but by no means exclusively due to a stunningly good origin story episode. In the end, I think Midousuji is a great character because he offers a fascinating insight into a certain type of competitive personality (which is a major theme in Yowamushi Pedal), and by the end of the series I even found him to be admirable in a strange way.

Look, this is going to be the first of four H x H villains on this list… But honestly, if anything I think I’m being conservative with the number of characters i'm including from this series – such is the richness of its character pool. Any of Meruem’s Royal Guard would have been a worthwhile addition, but I think it’s Neferpitou who has the most intense dramatic peaks. And his final confrontation with Gon is one of the most memorable sequences in manga or anime history, regardless of genre or demographic.

From Akatsuki no Yona

Well… See above. Akatsuki no Yona is a series that reveals more and more depth and subtlety the deeper you dive into it, and no one epitomizes that more than Soo Won. When the series opens we see him as part of an inseparable childhood trio with Yona and Hak, the two leads. That makes the decision Soo Won makes a shocking one, to be certain. But as the story progresses we come to understand that there’s more to what happens than meets the eye, and that Soo Won’s motivations are neither simple nor easy to dismiss.

As with many of the villains from this piece, the being known as Lordgenome is a fascinating antagonist because he’s more than just a villain. And his role evolves substantially over the course of the series. He’s certainly an obstacle to the heroes, but he’s also someone who firmly believes what he’s doing is the right thing for the planet. And events in this second half of the series take his arc in some fascinating and unexpected directions. 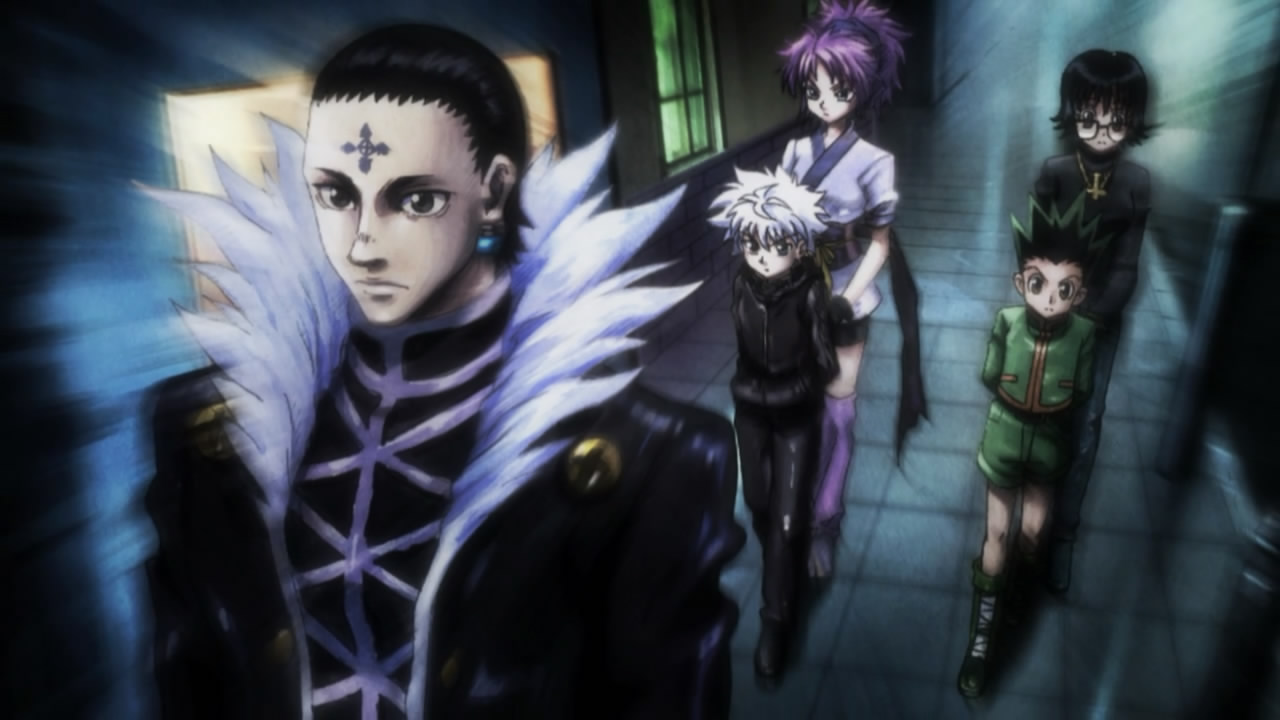 Hunter X Hunter is a series that's full of great villains - but that's not surprising as it has great examples of practically every character archetype and plot twist there is. Chrollo, leader of the Phantom Troupe, features only in the "York Shin" arc but makes an impression that lasts throughout the series with his steely calm and terrifying Nen ability. He makes a great "fire and ice" pairing with Hisoka - but we'll talk more about him in a moment...

From Ushio to Tora (Ushio and Tora) 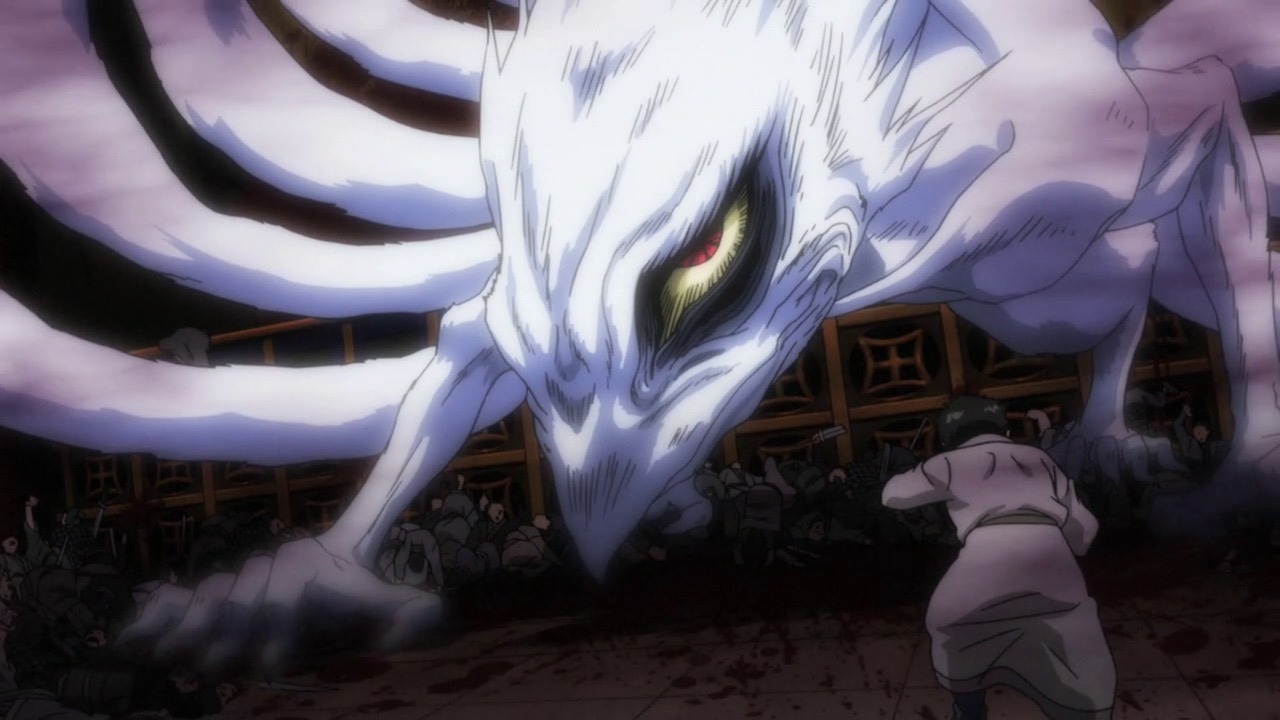 From Shinsekai Yori (From the New World) 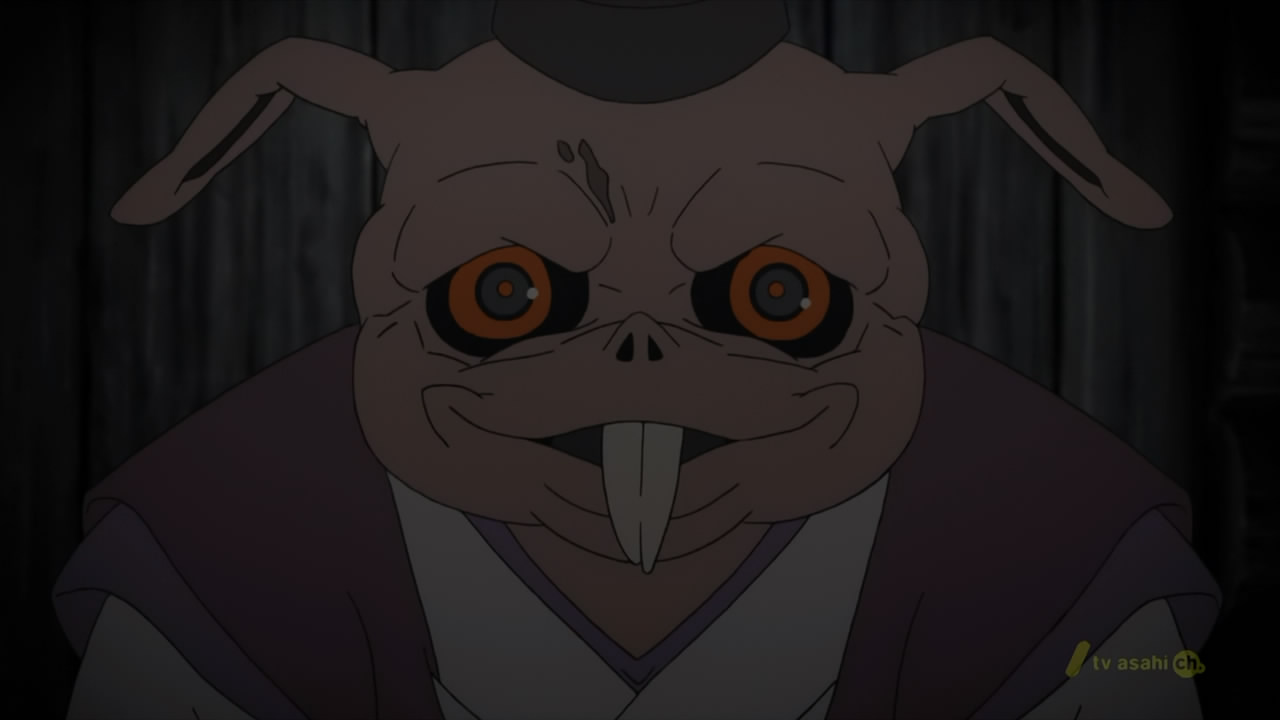 Also known as Squealer, this bakanezumi marks Namikawa Daisuke's first appearance on this list (that was a spoiler). Shin Sekai Yori is a wonderful series that spans two timeskips and a lifetime of twists and turns, but Yakomaru is a constant - a villain who for all the terrible things he does is someone you can't help but respect just a little. That's a tribute to the brilliant writing and acting behind the character.

From Gankutsuou (Gankutsuou: The Count of Monte Cristo) 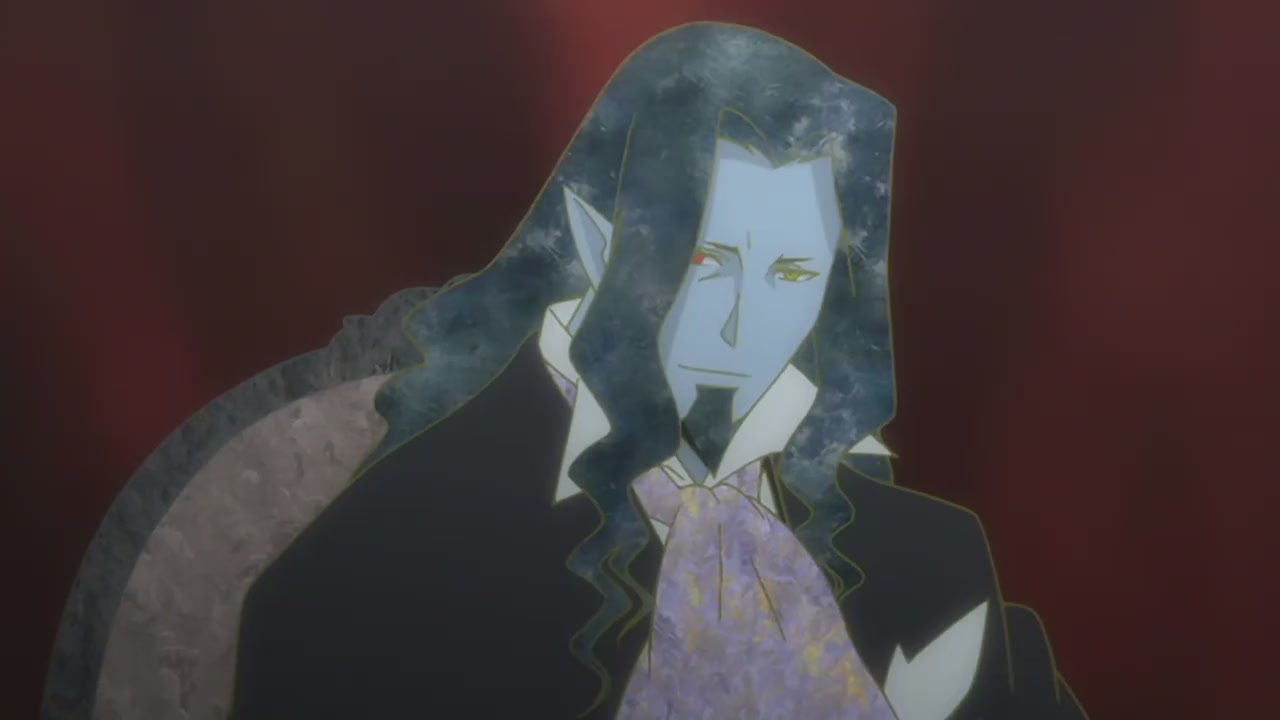 Great seiyuu performances are a recurring theme of this list, and Nakata Jouji's turn as the Count of Monte Cristo is one of the best. Gonzo's reimagining of Alexander Dumas' novel is a masterpiece altogether, but it's the title character that makes it transcendent. A master of patience, manipulation and charm, Gankutsuou is the living embodiment of the adage that revenge is a dish best served cold. 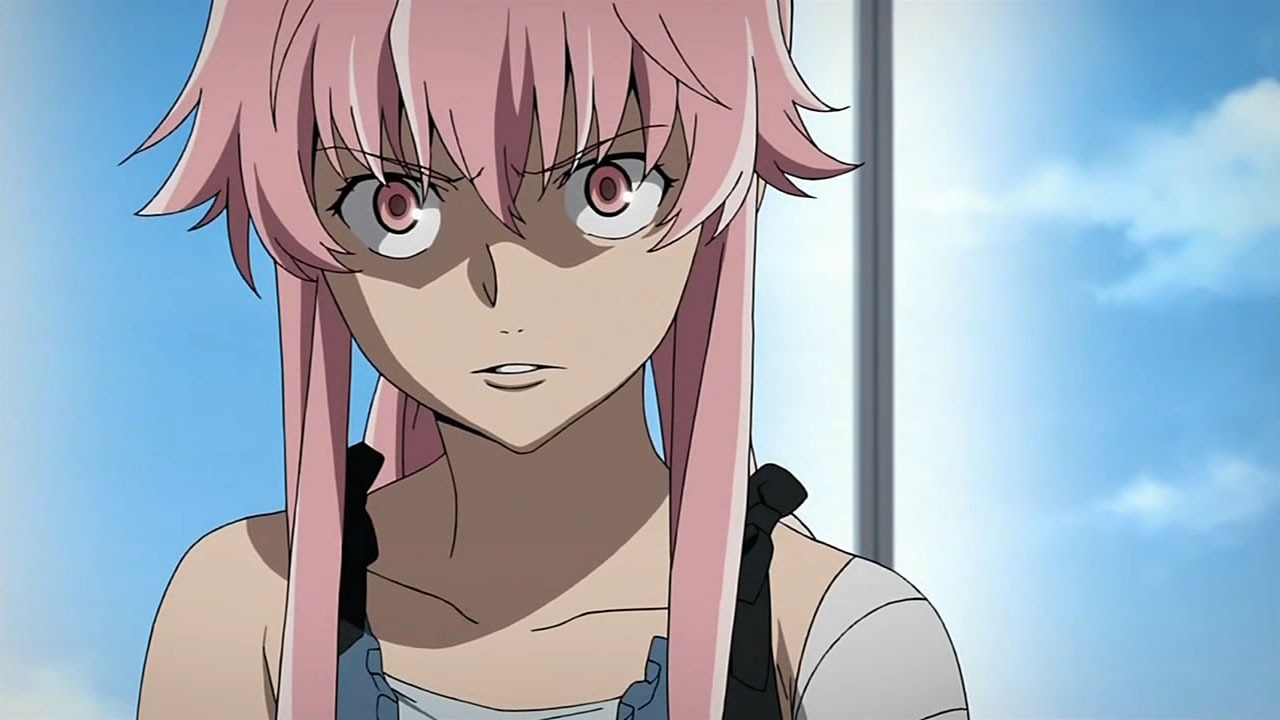 I've no doubt that some will quibble that Yuno - while anime's singular yandere - isn't truly a villain. I don't agree - just because a character is a villain that doesn't mean they can't love the protagonist or occasionally be sympathetic and let's face it, Yuno is a psychopath of the highest order. Thankfully, she's a wildly entertaining one. 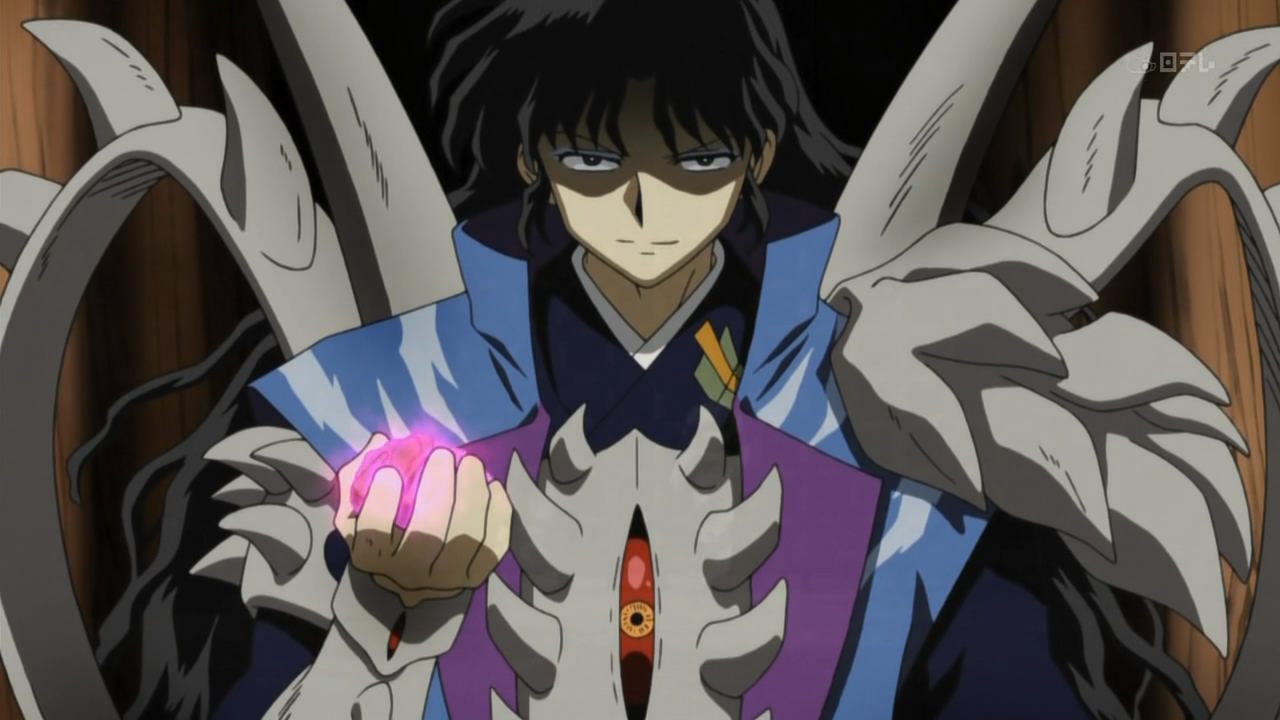 It's become fashionable to bash Inuyasha, but the fact is that there are some truly magnificent elements to Rumiko's epic fantasy. And the poisonous spider Naraku is one of them, one of the greatest examples of pure, unrelenting evil in anime. Naraku is another of those anime villains who doesn't make the list on the conflicted emotions he elicits - he's here's because he's great at being really, really awful.

4. Meruem aka. The Chimera Ant King 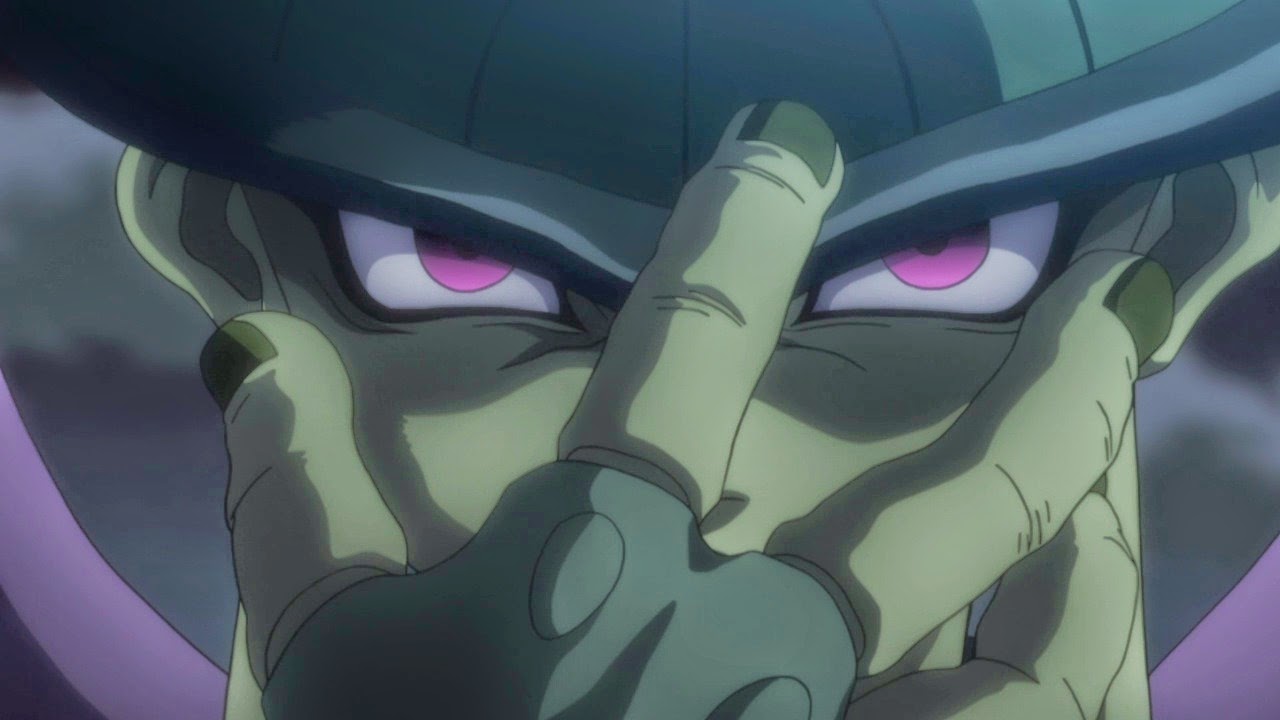 We're in heady territory now, where really any of these characters could be argued to be anime's top villain. Meruem has it all - he's ridiculously powerful, sadistic and terrifying. But what really makes Meruem exceptional is the way Togashi takes his story in a completely unexpected direction. For a character to start from where Meruem does and go on to have an unforgettable story of romance and redemption is one of the great achievements in manga and anime. 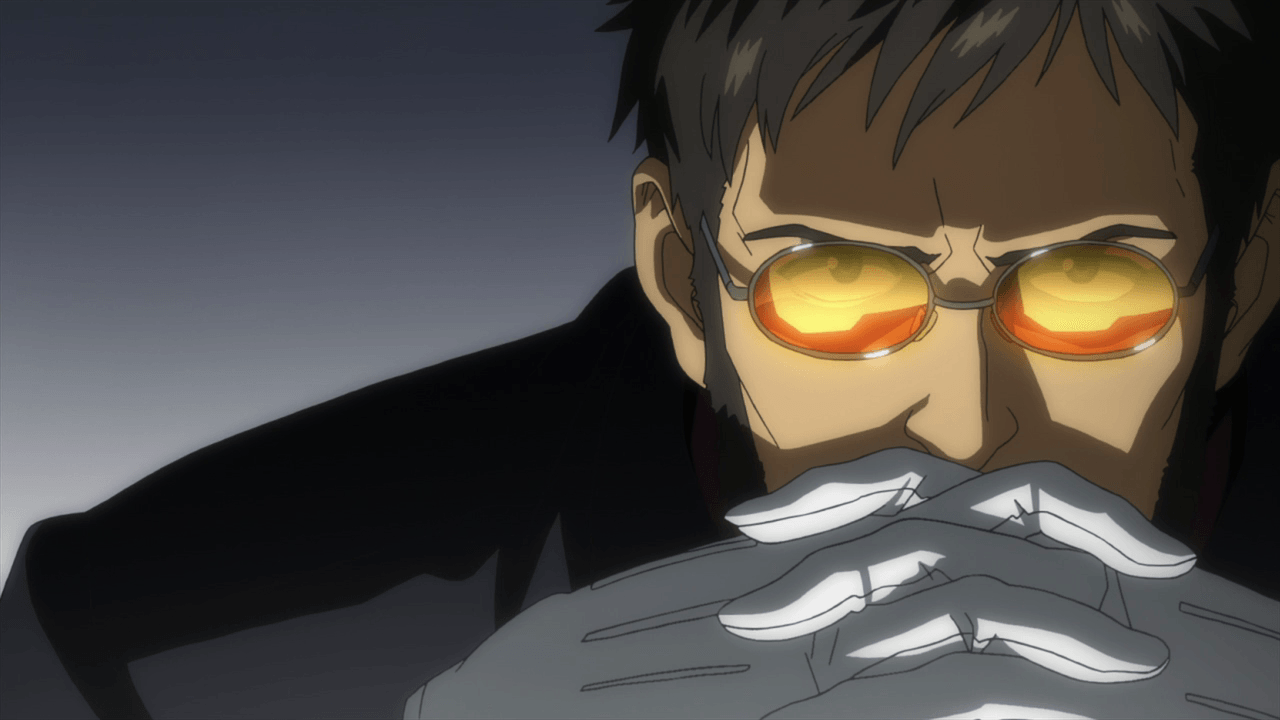 Ikari Gendo sets the standard by which all bad dads are judged, pretty much. Evangelion is a series littered with so many elements that have become anime archetypes that one could write pages about all of them, but Gendo is certainly a standout - right down to his signature pose. I've always contended that you can't appreciate Eva the way Anno Hideaki intended unless you sympathize with Shinji, and when you consider who his father is, you can't not sympathize with him. 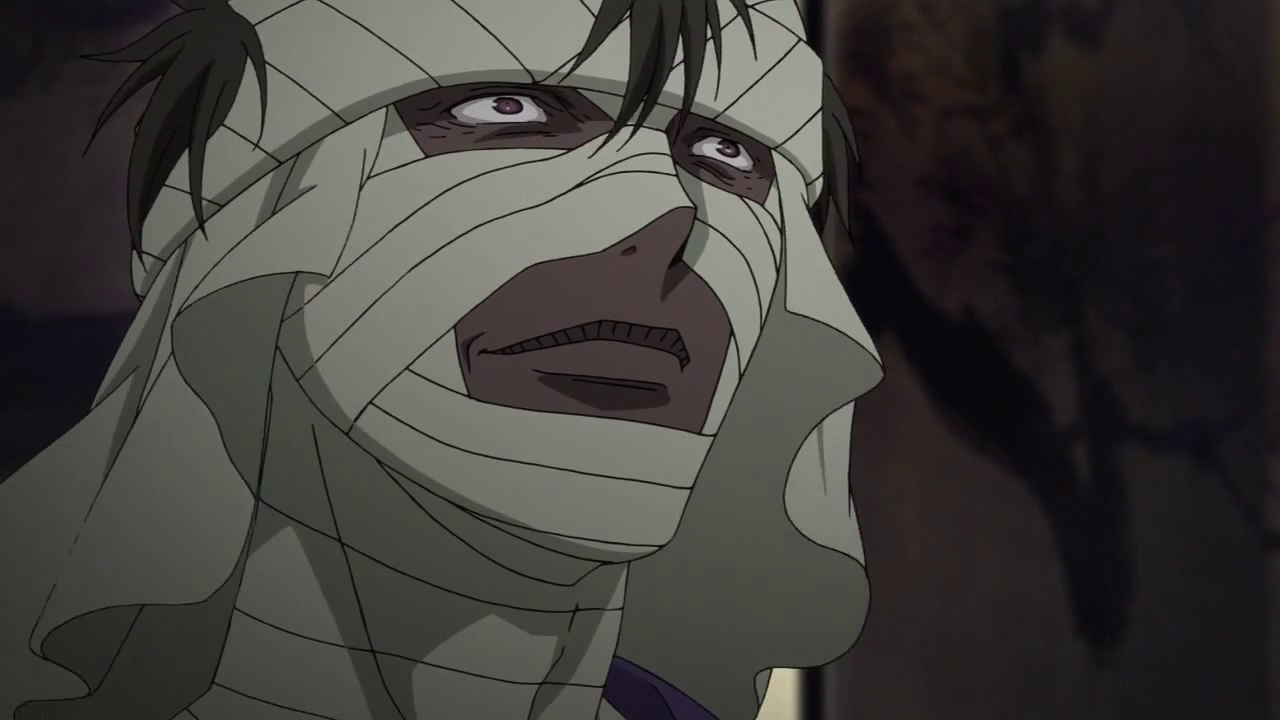 Along with "Chimera Ant" I consider Ruroun Kenshn's "Kyoto" arc as the most perfect in all of shounen. And in the horribly disfigured former Hitoriki Shishio it has the perfect villain. Everything about Shshio is spot-on, right down to Watsuki Nobuhiro's character design. Shishio is a great villain in part because he's a victim himself, someone with whom Kenshin can't help but feel a certain kinship. He's also a man who firmly believes his twisted vision is the right formula for the world, and that makes him that much more frightening. 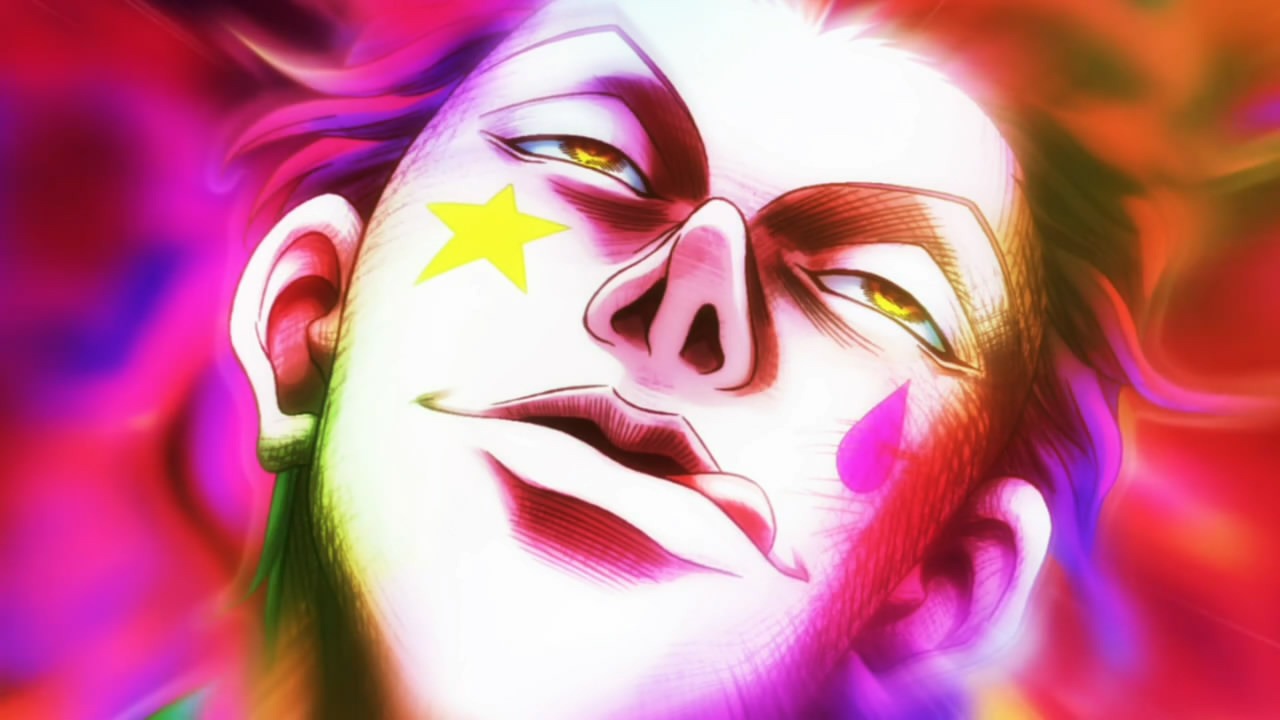 It may seem excessive to include four characters from one series on this list, but they all belong here on their merits. And Hisoka is, for me, the most remarkable anime villain of the lot - rarely in anime (or elsewhere) has a character so thoroughly owned the screen every time he appears. Hisoka is a fascinating and terrifying riddle of a man, a sadist full of twisted and prurient desires that makes the gratification he derives from cruelty that much more disturbing. But he's also hilarious, implacable and irrepressible - as charming as he is despicable. There's never been a character or villain like him, and there probably never will be.