The wind bites at your skin, the snow soaks your socks, and no matter how many blankets you pile on you, warmth seems to flee from your body. Why not try warming up with these must-watch anime beach episodes! The weather outside may be frightful, but the beach is so delightful! 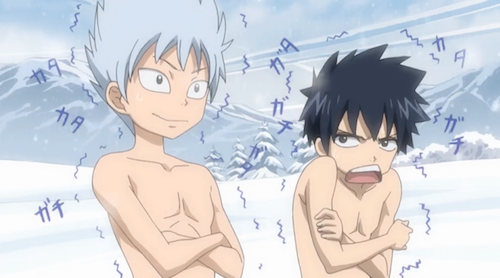 Harima fails at life once again! He picked the wrong time to practice martial arts while naked and Eri got the horror of walking in on him when she returned to pick up some sunscreen. Things would have been bad if Akira hadn't been there to figure out what really happened.

From Suzumiya Haruhi no Yuuutsu 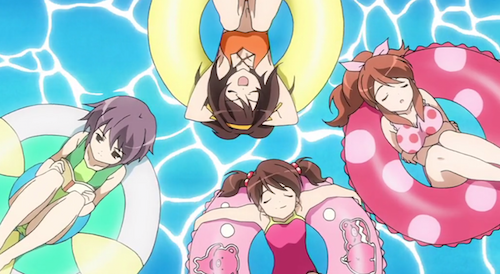 Haruhi is sure that the SOS Brigade will solve a murder, even if there hasn't been a murder. What she gets is a remote island that appears to be completely murder free... for the first day, at least. On the morning of the second day, the SOS Brigade is lucky (or rather unlucky) enough to find their host locked in his room with a knife sticking out of his chest! 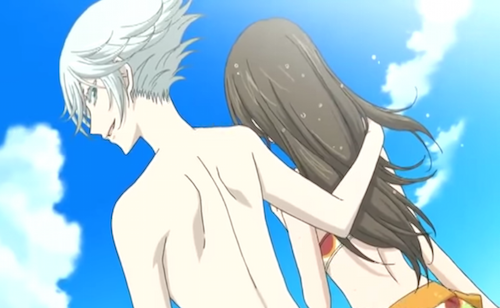 To cheer up a heartbroken Nanami, her friends invite her to the beach... only to have the source of the heartbreak, Tomoe, join them. Little did Nanami realize that Tomoe's refusal to get into the water wasn't a case of mere dislike of the open water. But upon Nanami's plee for him to save Ami's life, Tomoe risks diving in and pays the price for an old crime. 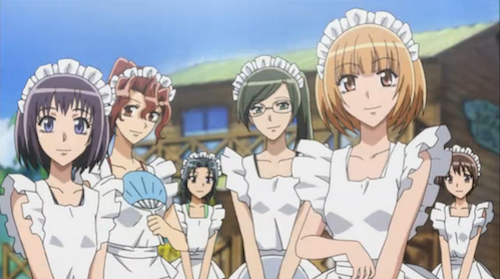 Misa thinks she's going on vacation for some sun and a few days free from Usui! But when the staff of Maid Latte learn that the beach house they're staying at is in a dire need of customers, they decide to throw a one day maid cafe. So vacation turns into work and guess who came along as the staff's body guard? Yep, there's no escaping Usui! 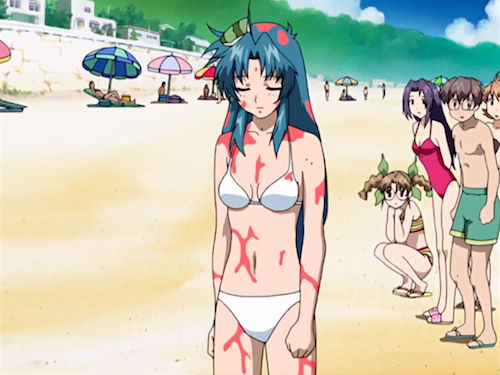 Kaname is once again fed up with Sousuke's stupidity! First he doesn't notice how nice she looks in her new swimsuit. Then he covers her in watermelon bits from shooting a watermelon with a shot gun. But of course, leaving the beach in frustration without telling him where she was going left the idiot to imagine the worst (that she was kidnapped). Thus starts the unnecessary and overly dramatic rescue attempt. Will this boy ever learn how to be normal? 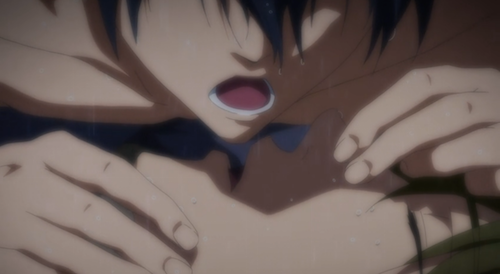 The swim club decide to hit the beach in order to train a little harder, but Rei's skill level is still behind everyone else and he decides to try secretly swimming in the night to improve faster. But his disappearance doesn't go unnoticed and just as the rest of the team finds him, a storm sets in. Rescuing Rei was a success, but one of the others might require mouth-to-mouth! 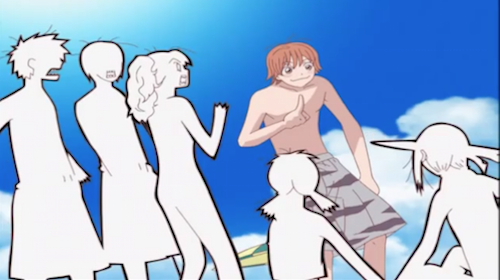 Risa's fun in the sun gets cut short when her friends decide that this is the day she will confess to Ootani! But of course her confession goes right over his head and he spends the rest of the day trying to guess who her crush is. Poor Risa's really got her hands full trying to get this idiot to see her true feelings.

Kotoura spends her first summer with friends! But due to her childish figure, she fears her appearance will be a slight disappointment to Manabe, so instead of enjoying her time at the beach, she spends it hiding from him. But she swims off a little too far and it is Manabe to the rescue! 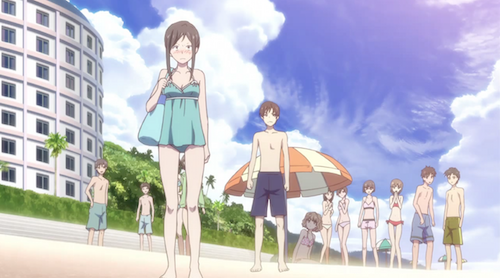 The girls of Kissuiso have broken hearts and unwanted confessions to deal with as their school goes on a trip and stays at an inn run by Yuina's fiancé. Don't worry, that was a surprise to everyone. But when Yuina is asked to work at the inn after graduation, all of the girls are left with the same burning question. Do they really want to work at an inn or do they want a different future? Yuina decides that her family's plans are not her own, but Ohana needs time to think things over. 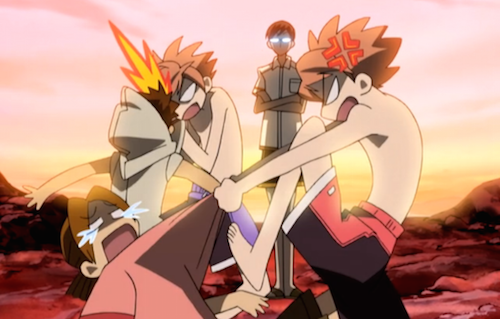 The boys of the host club start a competition to see who can discover Haruhi's weakness, but they end up spending the day either scaring themselves or just looking stupid. While trying to protect some customers, Haruhi gets into a fight with a couple of thugs, which leads to a fight with Tamaki. But fear not, their reconciliation scene is a classic fan girl favorite. 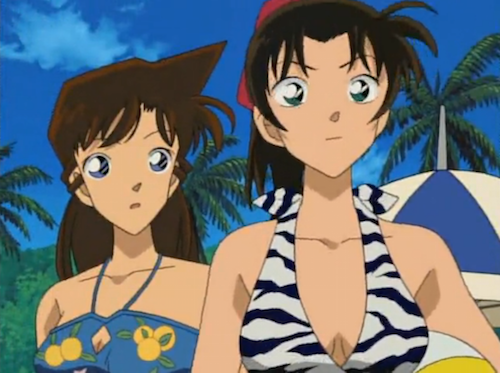 Mouri and Heiji go head-to-head on a detective competition to uncover the story behind an unidentified body that was found on a deserted island a year ago. But while Heiji, Conan, and the rest of the gang are checking out the crime scene, another murder takes place and they end up stranded on the island! With a killer on the island and little hope of anyone finding them, will they survive for long?

Episode 67 - "The Beach, The Island and a Vacation: The Guardian’s Break" 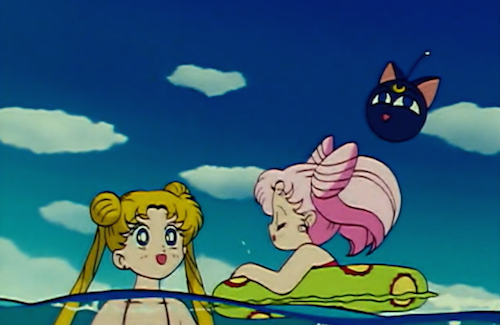 Rei tries to take a vacation on a desert island so that she can work on her spiritual powers… alone. But friends don’t allow friends to take vacations alone! Chibiusa and Rei get into an argument and Chibiusa decides to swim a little too far out to sea where sharks seem to think they've found a nice snack. To everyone's surprise, she isn't saved by the guardians, but by a baby dinosaur!

From Persona 4 The Golden Animation 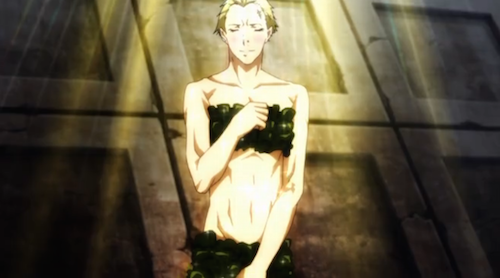 May we present you with the birth of Venus as modeled by this delightful delinquent, Kanji. Kanji makes the mistake of wearing an appalling speedo (one that no man would look good in) only to have it float off without him. While trying to figure out what to do, the girls start to walk over. To hide his nakedness, he quickly covers himself in some nearby seaweed and presents himself as Venus. Sadly, none of us will ever be able to get that image out of our heads.

Check out the video at the bottom of the article to gaze at Kanji's fabulous body for yourself!

Chitoge begins to realize that every time she is around her fake boyfriend and enemy, Ichijou, her heart starts to race. Of course it takes someone else explaining these feelings for her to understand that she is experiencing a crush. Could this fake couple become a real couple? 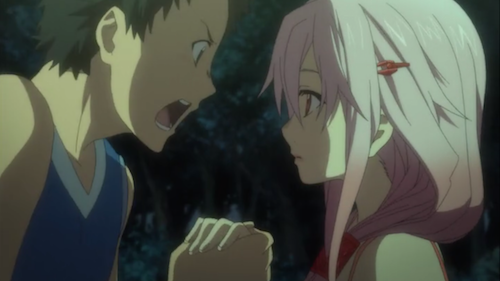 In order to draw out Souta’s void, Shuu, against his will, convinces him to confess to Inori. Let’s just say that Shuu couldn’t stand to sit by and watch the confession unfold. There is a very good chance that he will never be able to live down his way of spoiling Souta's confession. 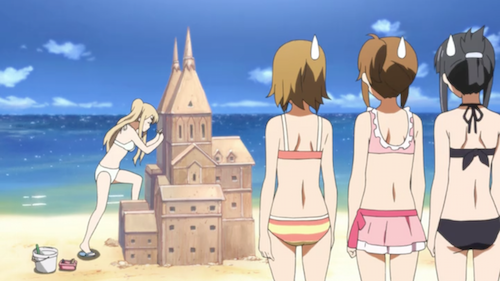 The light music club is determined to perform a concert for the school festival and bring back what their club used to be known for, fantastic music. To prepare them, Mio plans a training camp, but the beach location proves to be a little too tempting to get any real work done. However, they have plenty of time to build rather dramatic sand castles.

Episode 6 - “In Which Kenjiro Tries to Strengthen the Friendship Power of Akane and the Other Girls, But Things Get Out of Hand”

Akane and her teammates go on a vacation to the beach, but her grandfather has plans to train them further. Plans that involve kidnapping one of her classmates and placing ‘do not push’ buttons in places they really should never be in the first place. His plan goes south when his victim escapes and saves the others from his traps. 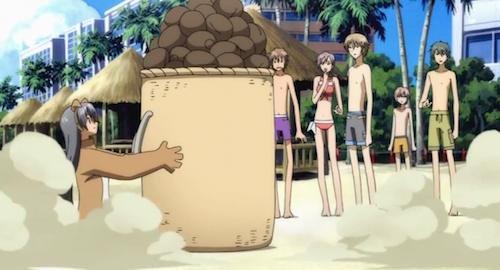 The SA class goes to Hawaii for a break, but poor Ryuu is forced to help with his parent's work by entertaining the son of one of their clients. To keep the kid entertained, the SA class must play house with him. Kei probably wouldn't have a problem with that if the kid didn't assign him the role of Akira's husband. Even pretending, poor Kei doesn't get to be with the girl he cares for most. 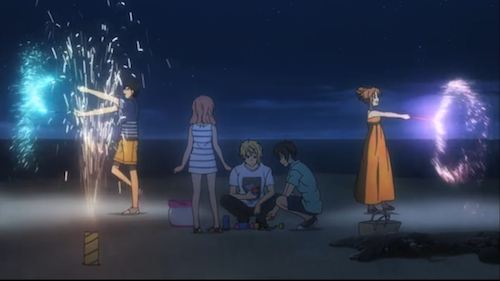 Kouko finally gets her day at the beach, but her day seems to be haunted. Banri refuses to let what appears to be bad luck get to him and so they play on the beach in the rain until the sun comes out. But the car ride home goes worse than the old Banri planned for. Can he stop the catastrophe before it happens or will this be the end for some of our favorite characters? 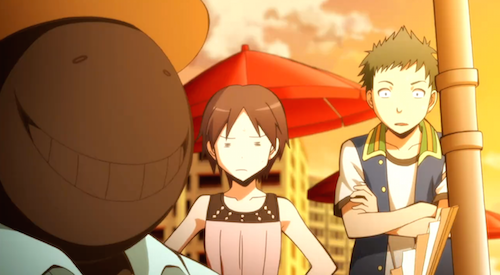 Since E class won their bet against A class, they get to go on A class's island trip. The private beach gives our young assassins the perfect opportunity to finish off Koro-sensei. This means utilizing every one of his weaknesses in order to take him down. Ever wonder what Koro-sensei looks like sun burned?

Well, if that didn't warm you up, then this should do the trick...