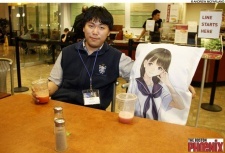 Lordcrab86 Dec 27, 2012 10:07 PM
so your body pillows weren't good enough? just felt crawling back to me to get your ass kicked some more? speaking of ass, i see yours is still bleeding, i just so happen to have some tampons for you.

btw dubs are a 1,000 times better than subs and you're a weeaboo.

Lordcrab86 Dec 27, 2012 10:48 AM
so you reply back to me...........two weeks later with another no u comment. and you say i'm hopeless? you're are one pathetic little monkey, but then again that's no surprise coming from a try hard faggot who won't admit to the fact that he left a stupid comment getting pissy at people having different tastes and opinions and instead just self projects himself on to someone else. also why did it take so long for you to reply back? to busy raping your animu body pillows because you can never get a real women because of your low function autism?

Lordcrab86 Dec 13, 2012 12:24 PM
i just did. i keep telling you that you left a dumb comment and now you're making yourself look like a dumbass, that's the point i've been trying to make, how hard is it to grasp something like this?

Lordcrab86 Dec 13, 2012 9:59 AM
wow you're saying i'm retarded yet the garbage you say is so flimsy it couldn't hold rock-a-bye baby in his tree top, i'm straight up telling you how moronic you're acting yet you say i'm the stupid one? blow me. besides, this is coming from the guy who said the following:

"Just say no to dubs..... listen to the original, otherwise you are dumping half the content the directors put in for you."

are you that unaware of how flawed this comment is? you're telling people not to watch dubs because you're making it sound like the original japanese dub is x100 better (which is a bullshit assumption might i add). again, don't tell people what to do just to make you happy you sad little munchkin. also what's wrong with being honest and blunt? are you implying that being blunt is a bad thing? if such were the case you probably prefer shit being sugar coated because you're a sensitive little bitch, in shot if you can't handle the blunt and honest truth, that's your problem. lastly, you may have your own opinion, but guess what, so do i, and i can say that it's my opinion that your opinion is full of ignorant, autistic shit. people have the right to watch whatever anime they want in any language format, yet faggots like you get pissy because no one watches anime the way you do, again blow me.

and by the by, really nice you to use my first comment to you as some sort of comeback to me, i applaud you there. seriously though, quit trying to act like the superior one because you're just a stupid motherfucker who can barely hold himself in an argument.

Because we all know that Japanese voice acting is such serious business, am I right? Seriously though, fuck off, don't tell other people how to watch anime, how does that concern you?