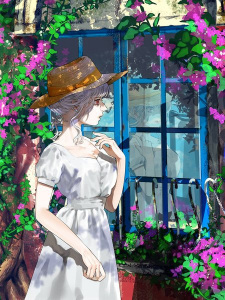 Wuhuu Jul 3, 4:26 PM
Made me cringe in a good way gotta give it credit

Wuhuu Jul 2, 8:57 PM
Shit shouldn't even be a spoiler lmao idk what anyone expected

Wuhuu Jun 27, 6:46 PM
Even Nasu has said before that he wants to move on from Fate. Like with FGO he still has final say on the story structure and characterization but he mostly leaves writing to others, and he doesn't write any of the spinoffs. When he does write for FGO it's really apparent that his writing style doesn't mesh well with a mobile game format, with a few exceptions.

None of the other Fate writers really capture the spirit that was in the original FSN - Urobuchi imo is mad overrated and it shows with his work on FGO, Narita can't finish his own stories, Sakurai and Higashide are just bad etc. I'd love to see more stuff centered around non-servants and exploring more of the magecraft system, but that can be done in other works like Tsukihime or Mahoyo.

FHA is pretty fucking lit, the main characters are great

Wuhuu Jun 27, 2:07 PM
Is having Akari as a favorite really basic? I totally thought it was Alice that was mainstream. I'd like to see an OVA of the Sea Marriage or w/e it's called in the manga - it's pretty standalone so there wouldn't be any issues with having to create original material. I'd like to see more of the new characters from Avvenire, but they'd be taking a risk.

I love Fate but none of the adaptations save for FZ are that great. I think the UBW and HF adaptations are far from ideal (though Shirou's monologues are pretty much impossible to translate to anime) and Apocrypha and FGO had shit source material to adapt lol. The only reason why I would want another Fate anime is to see the fights animated, but Ufotable decided that flashy fights > fights that are true to the source and make sense. The only potential adaptation I'd be excited about is Strange Fake but that's far from finished and I have serious doubts about Narita's ability to tie up all the plotlines he introduces in his works.

Wuhuu Jun 27, 11:04 AM
Out of the main six I think the most fleshed out character is Aika and I love Chiwa Saito's performance. Alice has quite a bit of depth to her and has the best antics. I'm weak to Akira lol. The other three are also pretty nice, I prefer Aika and Alice over Akari but she's a good mc. Don't like Woody and Akatsuki is either alright or irritating :shrug:

I'd have to go back through the entire show to pick out all my favorite episodes, but the ones that have stuck with me include Animation 11, Natural 18 and 24, and Origination 9.

Wuhuu Jun 27, 8:29 AM
Guess that's where our tastes just differ lol, personally I think the narrator's voice is entertaining enough for those segments to actually be funny in anime format. In general I don't think Kaguya is particularly innovative (hate the "Aka sensei is so good at subverting common tropes" comments) but I think it executes what it tries to do very well. I personally like the addons and references they add in the anime, especially in S2.


Guess I'll pass on ToG then,, I also watched Aria about a month or so ago and liked it especially Origination, pretty excited for that new project. The cat makes me want to smash my computer tho

Wuhuu Jun 26, 8:00 PM
I can see that. I don't have much problem with what his character is supposed to be, just think that there was room for improvement in terms of execution.
Akira is supposed to mean a lot to him as the person that he best shares his passions with. He runs to the airport to see her off, he takes her to another town's arcade, he puts off gaming to try to get into the same school as her, he doesn't feel complete without her around to play games with. Which is why I didn't like seeing him not only clueless about where should could be when she runs away but also get distracted by arcades instead of trying to find her asap. The urgency that I think he should feel at this point, isn't there.


Like I get the inferiority he feels towards her, but the way I see it it's just not something he'd do - the whole scene is a test of how much he values their relationship and the actions he takes aren't fitting given what he already did for her. Other shows like Monogatari or even Kaguya handle this "trope scene" in a way that's more consistent with what we know of the characters imo.


I think the difference between the rambling in this and something like Monogatari is that for me, the dialogue in the latter gives new depth into Araragi's thoughts and character while in the former it feels more like a description of the game (obviously not all of the rambling is about describing a game, but a significant part is). The infodumps are in a sense nice bc it can get unfamiliar people into the games, but they don't serve much of a purpose for the story or the characters - the actual gameplay can do a better job. Now this is necessary in the manga because ofc it's limited in how well it can portray realistic gameplay, but it doesn't translate well into anime where you don't face that restriction. It's definitely fitting for Haruo to gush about whatever game he's trying to git gud at, but that doesn't mean it's always enjoyable to listen to. Maybe it's just his drawling, on the border between non-puberty and puberty voice lol, like I think I would have found it easier if they used the narrator from Kaguya. The symbolism in the games is great, just wish more screentime was given for a more immersive view of the gameplay that could let the audience reach the thematic conclusion themselves instead of having it described for you.


On a side note, what's your opinion on ToG? I don't really watch seasonals anymore and I don't expect much other than shounen stuff, but is it worth watching at all?

7 is a good score

Wuhuu Jun 25, 7:18 PM
I don't actually mind Haruo's idiotness that much, I think dork characters are pretty refreshing and they can definitely be well done. I do think the way he acts near the end is kind of a disservice to the growth that he should have had - episode 11 sticks out to me that imo sets his development back to pre-E3 and then he seems to flip back during E12 - which doesn't give his character a sense of legitimacy.


Beyond that I think his ramblings on whatever game he's playing are waaay too much tell don't show, though it's probably done to contrast with Akira (but then again, is the contrast necessary to tell the story the author wants to tell?). I kind of give it a pass because I'd imagine that's how it was done in the manga and you can't just cut it out of the adaptation, but it's grating nonetheless and takes me out of the immersive gameplay "footage" which is perfectly capable of speaking for itself.


For me what S2 needs is to put some flair on the tropes they use - the setting's original, the structure not quite. There's a lot of quirks that are pretty amusing at first but stagnate into one-trick ponies like the mom, the rage gamers, and imo Akira's silentness. I think episode 3 and the exam episodes are really well done, but it didn't have that sense of consistency and creativity would make me give it a high score. But I think it has a lot of potential and I am looking forward to seeing how S2 improves on things.

Wuhuu Jun 25, 8:50 AM
Mostly because I'm not a fan of the mc, especially towards how he acts near the end of the season. Also not really sure what the purpose of Akina not ever talking was, other than "strict family withdrawn girl"? Somehow she still feels like the most expressive of the characters and I can't tell if that's supposed to be a good or a bad thing. I get that a large part of the show is using games as a way to communicate and build relationships, which I think is a pretty good idea, but imo Akina not speaking seems like a gimmick that isn't necessary to the story that's being told, and sometimes acts to its detriment.


Fwiw for me anything 5+ is worth checking out, and it's better than some of the other 5s I have. It kept me interested enough that I want to watch S2, so hopefully things develop more

Wuhuu May 23, 8:57 PM
Last time i took a look at the sub they voted Asuna best girl that's when I realized anime was a mistake

Wuhuu May 22, 9:53 AM
Same, covid got me to watch anime for the first time in forever. Been trying to catch up on some classics