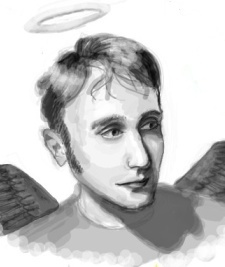 And I've heard of Naraku, I don't remember what exactly, but I may watch an ep or two someday and see. Just to check if this is something I might ever watch. Thanks for giving me a complex review. :D

Marta_Ayanami Jul 9, 2015 11:46 PM
How's Inuyasha? I've heard a lot about it, ages ago, but I've never tried reading or watching it because the length was a bit daunting, heh. How is it so far?

Marta_Ayanami Jun 22, 2015 11:26 AM
I'm already intrigued by Mireille and Kirika, so it's off to a good start. I'll tell you how I like it whenever I manage to watch more (maybe I can find it somewhere legally? I'll try.).

I watched the first episode in English dub, and the dub seems quite good, too.

Btw, I've watched first ep of Noir. And, first of all, it felt like rewatching, not watching (once upon a time in 90s I read an article in Polish anime magazine about Noir, in which a fan lovingly described and summarised first ep in vivid detail, so while watching the ep today, I found myself feeling as if I was rewatching something that I had watched once upon a time and the only difference was sound and music), which is funny. Secondly - well, I really liked this first ep. And the music is gorgeous! I knew that it would be, whenever I read anything about Noir everybody seemed to agree that the music is quite something, but I wasn't really prepared to love it that much immediately. :D

I'll watch second episode to make sure it's something I wanna watch, and not just because of music. But so far I think I'm gonna like it. :)

Marta_Ayanami Jun 20, 2015 2:37 AM
Yep. Haibane's one of those things that can be crossed with everything. Another is Kingdom Hearts, I think. And another Clamp's titles- after all, they make crossovers of all of their titles, so it's not any stretch to add other things, too, heh.

I wish I could write fics, but rn I'm a bit too busy for that. And the only time I tried was back in high school, when I wrote something from FMA. (though I saw it recently and well - to be honest I didn't really know how to write stories yet.)

Oh, that reminds me, there was a great fanfic I once read, NGE and Haibane Renmei crossover, with Shinji and Rei reborn as Haibane... well, idk if I would still like that fic, I read it almost ten years ago, I think. If I ever find it, I'll show you. I liked it, but I love many fics, so I completely forgot it existed.

Marta_Ayanami Jun 19, 2015 7:35 AM
And yeah, I know what you mean. About money, that is. As a teen, I used to buy whichever manga I wanted, or used to ask my parents to do so. Well, same thing, back then, since it's not like I earned anything then. But rn I'm graduating from university and I know I'm never gonna be spending as much money on my hobbies as I did in my child/teenagehood, well, that's just how it is. :) So rn I'm really, really happy about crunchyroll, daisuki and other sites when can legally watch anime online for free (with a looooot or ads, but nevermind that. XD ) So someday I'm probably gonna be watching anime series more often than read mangas, which is still a bit weird for me, because, yeah, I usually slightly prefer reading to watching.

Currently I'm only buying one manga volume a month at most, and that's not gonna change any time soon, I guess. :)

Marta_Ayanami Jun 19, 2015 7:27 AM
Hmm, I might try watching Noir someday. Thanks, this is a great overwiew of what to expect without getting spoilt. :D (sometimes I want to know if I would potentially like the story, but don't want to get spoilt on the details, and that's hard to achieve. so, that's neat.)

And crossover between HR and Noir? Never heard of that, but that sounds like another reason for me to finally watch Noir! :)

Marta_Ayanami Jun 18, 2015 12:41 PM
I see. Well, I counted Haibane Renmei among the anime that would probably never be licensed here, so I imported half of it from Australia after I first watched it (and immediately loved it after watching. btw, Haibane isn't a very popular anime as far as I know, so I'm always happy to see another fan of it) and then, some years later, was shocked when it was licensed and released in Poland after all! Bought it immediately. :D Yep, even the part I had. Because it's one of my favourites.

Well, I'm just trying to support local manga and anime market, I guess. It'd be great to see more than half of a shelf of anime dvds at most in stores, after all.

As for me, I read manga much more often than I watch anime. Or at least I think so, that might depend on how much time I have at the moment. (I read much quicker than I watch, that is. Novels, manga, whatever. I've always been reading a lot.)

I had read many articles about Noir in local anime magazines back then (when it was among top popular titles, I mean. so probably when it first aired? idk) and I've always been curious about it, but somehow I never tried watching it. I wonder if I'd like it. I don't even remember much of what I had read about it back then, other than the fact that I was intrigued by it. Maybe I should try watching first ep to see if I'd like it. (I still allow myself to illegally watch first episodes. Otherwise, I wouldn't even know if there is any potential.) So is Noir something that starts interestingly, or something that doesn't begin to be really engaging till several episodes (which I wouldn't mind either, some of my fave stuff is that way, just curious about it)?

Huh. Never heard of Alien9 so I guess it really is rare.

Marta_Ayanami Jun 17, 2015 11:23 AM
Well, in mine (Poland) there also isn't many anime released, but at least there are more and more mangas! And anime... well, sometimes there are some releases, but then it goes bankrupt because people don't usually buy anime, just download it illegally. So there's no point releasing anime in Poland, mostly.

But I hope Anime Eden, that just appeared (http://anime-eden.pl/), won't go bankrupt. Their first release is Sailor Moon R movie dvd, and I'm definitely buying that! Second one is gonna be, according to poll results, Attack on Titan, which I happen to like, to. So yeah, I'll be buying their stuff, and hoping they won't just stop releasing in several months. :)

As for import, yeah, I sometimes import anime, too. Usually stuff that I doubt I'll ever see in Poland.

Marta_Ayanami Jun 16, 2015 9:39 PM
I see. Wow, that's interesting, I had no idea Arslan had such long history. I've only been interested in it recently, when I noticed it on Crunchyroll and immediately noticed that it was drawn by Arakawa, even though original story was by someone else, I guess, but I still decided to give it a chance (yeah, I'm such an Arakawa fan that it was the only reason. The summary didn't grab me at all, sounded very generic, though I'm beginning to like the story, so maybe I was wrong.).

If I ever get a chance to see the old OVAs, I'll do so! (If I can ever see them legally. You see, earlier this year I decided to no longer watch anime and read manga illegally, because I felt really guilty about doing so since 2006. But that's just my personal decision, so don't worry about it.)

Marta_Ayanami Jun 16, 2015 11:04 AM
Apparently most people hate Crystal, so I'm not surprised. I love it, but well, it's adaptation of the original Sailor Moon manga which I also hated in the beginning and grew to love over the years, so I certainly won't be trying to convince anyone, I can just love it on my own.

But R is just as good as first season, seriously, and S is much better so try them out later. :D When I was first watching SM in tv with my older brother, we both loved first two seasons, but with S he was so impressed that he immediately started recording.

Arslan Senki is a remake? I had no idea. I've began reading the manga recently, on Crunchyroll, only because Arakawa drew for it, and I like it so far - are you talking about this one? Or something else?

Marta_Ayanami Jun 16, 2015 8:43 AM
Well, imo other series are just as good, but of course that's just subjective opinion. And my personal fave are Stars (fifth one, it's the last one) and S (third). So I recommend you try other seasons, too, you can always stop watching later if you decide you don't like them, after all. :)
All Comments