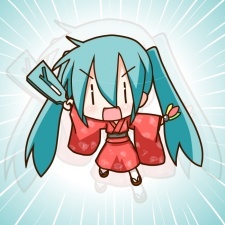 Sorry for the background noise and bad audio quality, and thanks for helping.
Anything you can give me is appreciated.

Snufkin Feb 6, 2018 5:53 AM
I saw you give a great explanation of something you translated from japanese for a club, and I'd really appreciate it if you could do the same for me.

In one of my favorite shows "Yōsei" (?) gets translated into "elf/fairy", no matter the context, but when I looked it up it translated to "bewitching spirit" according to wikipedia, and was written with the characters for "fine" and "demon", 妖精.
The show is Argento Soma, and in the second episode, around the ten minute mark, an old soldier uses the word to describe his old war comrades. I was wondering what exactly it means in the scene, I thought he might be calling them good people (fine) that did evil things (demon), but I don't really know how demons are viewed in Japanese culture, and I thought he might be calling their souls (spirit) beautiful.

If you would be willing to listen to what his speech, which is about a minute long, and give me your thoughts I'd really appreciate it.

moonblackrising Apr 8, 2017 9:08 PM
Okay ap19 thank you for your concern. If you have an information regarding this, maybe you share with me, I greatly appreciate this. Thank you very much ap19 :)

moonblackrising Apr 4, 2017 10:28 PM
Hello ap19 nice to meet you. I am from Indonesia and planned to come to Japan 3 months later for study in 3 years. I have a question about "How safe download anime from Torrent in Japan", should I use VPN like Hotspot Shield ? Can you give me a detail and information about how safe torrenting in Japan. Can I still get arrested if I download anime from horriblesubs or nyaa.se (I think those are the most legal and active site for torrent) and you usually do to enjoy watch Anime in Japan. I need help about that can you give me some information. Thank you very much for reading my commend and question :)

Erelen Dec 9, 2015 11:28 PM
Thank you very much for all the help. It is really helpful. Without your precious advices everything would probably impossible. Once more thank you for your help and sorry for causing a problems.

Really helpful!! It's hard to find nice people like you these days.

shina_luna Sep 20, 2015 4:16 AM
Yeeeas, it didn't seem to be a mistake of the shop either, since they put on a little sheet of paper onto the box with the original price (two hundret something) crossed out and the 40 onto it. I have no clue, why they lowered it to so low, any other series complete release was at 70-200€ range or 40€ per single volume BD. The box wasn't broken or anyhow defective either. I also bought Hotarubi no Mori e at the same place, that little movie had cost a little bit more that then the Bakemono box. It still doesn't really feel very real. lol.
Had it not happen, I would have probably gone for the French release for 20-25€ as I did for Nisemono. But the Japanese release sure is a lot more of an eyecatcher in my shelf.

I spent about the same per year, depending on how much is interesting, sometimes even more on odd years, but most of it goes into the western market. (US, France, UK, German, rarely Australia and Italian.) Of course with the lower prices I get to get a bit more stuff (I'm basically trying to definitely buy anything with score 6,5 and above and am doing a good deal of blind pruchases) and sure the industry is not getting get as much at the other end, but I guess it's still a little bit more than not at all, and perhaps even a slightly bit more evensly spread among the more not great-but-still-good series, as those would never pop up on my purchasing list, if I had to decide upon whose about two to three per year. (Also I often enjoy French dubs.) Getting Japanese Anime as a new pruchase here are a little bit very hard to afford, as aside the 250-300€ price by itself there is shipping (unlesse yesasia happens to list it for the same price as anywhere else, minimum 10€ if I find somebody who would send me that as a surface pacel to easily 50-100€), and there are 19% taxes and also customs when the item value and postage is above 150€ (with the customs getting taxed above that), which all easily adds up for another 50-100€. So the Japanese releases are pretty much the deluxe versions for me, which I mostly have to resort to second hand, otherwise this easily becomes completely unaffordable. (And I get to think, this is still better than not going for it at all, as at least the money the original buyer got from selling the thing off is to be spent on the industry with some likelyhood again, even if that's isn't really that much.)
So well, I'm not really going after Japanese releases that much often, it's usually for filling in gaps when no western release is around (Saiunkoki S1 got an US release, but the crisis in 2008 killed the series' further release off for good ;_;) or the poor title doesn't get released anywhere else. (Like Mouryo no Hako. >.<) or to get a much nicer release of a favorite series. (I wonder how a box release of Shinsekai Yori will look like when it comes somewhen.)

shina_luna Sep 19, 2015 1:17 PM
In fact I had more such 2nd hand shops like Book Off in mind. ^^
I've had the chance to visit the Book Off for Japanese stuff in Paris some years ago where I was able to get some things for comparably very affordable prices. (The biggest one time treasure being the Bakemonogatari BD Box for 40€.)

As for DVD vs. BD, I totally agree.
It's just, some things aren't out on BD yet. I'm having my eyes on Saiunkoku Monogatari's second season these days for example, which only exists on DVD yet (and doesn't look like it's going to get a BD Box anytime soon being somehwat a non-mainstream series), but almost all volumes are out of print, although most of them are listed for pretty cheap on Amazon's Marketplace. However they aren't shipping outside of Japan. (Even if they did, the flat shipping price per item on amazon would be quite a killer as it's almost 1000 Yen.) I haven't really got a clue how to get my hands on them except finding somebody who could send me them from Japan directly to my place. >_<"

shina_luna Sep 19, 2015 7:45 AM
Another question crossed my mind, although it's not a Japanese language question.
Do you happen to buy Anime/Manga BD/DVD/Manga and frequent such shops from time to time...?

shina_luna Sep 16, 2015 7:07 AM
Ah, now I see where you were getting into.
Unfortunately your last phrase is right spot on, I am not in the slightest interested in games.
But thanks for the effort of picking up the links nonetheless!

I had previously tried on some seiyuu talk CDs or audio commentary or interviews on Anime BDs/DVDs, which is (I'd suppose so at least) more "natural" talk. But somehow I couldn't get away with that it is sort of pretty boring to listen to, since it's usually pointless chatter where the listener is not involved himself.

shina_luna Sep 14, 2015 1:30 PM
Oh my the Enrish level. Well, I guess, this is actually a good level for such a slacker as I have been. *goes and moves some japanese novels ahead in the reading pile queue*

I am not really sure, how nico video helps. Do you mean the videos itself or the communitiy surrounding it? Through in these communities, the comments I came cross usually weren't that tremendously interesting. (But I usually only ever watch AMVs there I guess.)

shina_luna Sep 13, 2015 6:33 AM
Oh my, that's a heck lot of mistakes. It almost feels like a miracle you got any meaning out of it. @__@
Some of them also seem so obvious that it has me facepalming pretty hard. I'll take my time to brood over them again as to find out, how I could have made them in the first place. I do see that I must have had too much German in my head, there is quite a bunch of German phrasing mixed up in there.
But I guess, that's what one deserves for slacking off for years. ^^;
Anyway, thanks a lot for your corrections!

"Honestly, I didn't get what you meant here. I'll need feedback on this one."
I was trying to say, that judging from your anime list, your taste seems rather mature and thus you are most likely already an adult (and as such already working, thus not having so much time at hand.)

Oh, a new club. I'll see to drop by on the next occasion~
Though what I rather meant was more like a real Japanese place, a forum or some other community. Like how MAL is primarily an English based place.