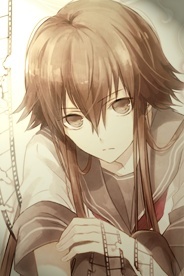 RadiGen Jul 12, 2014 5:53 AM
>When I said that about the Wish-Crushing Cinema, I was referring to the box itself.
I see, I thought you were referring to the arc itself. I agree though, the method was elegant.

>But I didn't like who ended up being the owner, although it made a lot of sense.
I agree with you on that, It's one of my problems regarding 5&6 actually.

>Maria certainly used her box on Nana before the Rejecting Classroom, but it doesn't have to mean she knew Kazuki.
I think that's impossible. IMO, it's impossible to perceive someone as a saviour figure without knowing who exactly they are.
I think it's been made clear though that Maria knew Kazuki in this line - "Therefore, 'she' unconsciously established a new rule inside
her: "Kazuki Hoshino has the makings of a savior"".
While I do think Vol. 7 would clear off any disambiguities regarding this matter, I simply do not agree that Maria would agree with using her box without knowing the situation in-depth. If she is to use it on someone, she must know why and that entailed knowing Nana's situation and with it - Kazuki.

>There's also the possibility she knew of him before and forgot after using her box
Yes, I think that's what Mikage is trying to point out and I do think this is really the case. It's really interesting though if Maria really knew of Kazuki, which if she does it would have probably been short-lived.

>but I don't think he could forget her like that, since everybody talk about her outstanding beauty, so he probably didn't know her.
By 'he', you're referring to Kazuki right?
I think Kazuki knowing Maria beforehand is out of the question, iirc he was already out of the picture (i.e., Nana run-off somwhere faraway).

RadiGen Jul 8, 2014 8:53 AM
Pardon me if I might say something quite off regarding Hakomari, I haven't re-read it since last year.

I see, I had no idea Umeniko was actually a novel. Well, that's somewhat understandable as adaptations are usually the poorly done.

>I think his writing style would suit visual novels much more than books. Any opinions on that?
Ah, I can't comment on such anecdotes unfortunately since I haven't played a single VN.
I understand your opinion on Vol. 1. I hold it in high esteem due to my subjective leanings, if you'd ask me though which arc I'd prefer objectively, I'd cite the Kingdom Royale arc without hesitation.
I'd have to say though that although Vol 3&4 are objectively the best for me, I bet that Vol 1, 5 and 6 were harder to narrate for Mikage for the reason that Vol. 3&4 were easier to quantify. The other volumes had a more subjective nature to it which makes the task of making the plot "objectively better" more difficult.
I also had some problems with the resolution of Vol 4 resembling deus ex machina, It's admirable how Mikage avoids this though, i.e., the situation was that Daiya forced O to appear so it isn't really deus ex machina.

>However, when presented to the settings that would begin the Wish-Crushing Cinema, I found myself realizing again how we readers just have to accept somethings because the characters stated so.
Well, this might have a reader side to it, I'm fine with the implications though for the most part.

>Kazuki thinks "oh, I can't understand that!", then someone whom he was talking to says "oh, as it seems you haven't understood..." and begins to explain.
Unfortunately, I can't remember that scene.

>I particularly found the Wish-Crushing Cinema very elegant.
If you were talking about how the larger picture was unveiled, I agree with you. It really shows how intricate the plot was. If you're referring to the arc though per se, I'll have to disagree, I can't help but think that somehow Mikage run out of creative juices when he did 5&6.
I'll let it pass though as it's understandable given that it was more of a revelation arc, which was neat. I definitely liked the bigger picture more than the arc itself.

Vol. 7 - well, they've been discussing it on the forums. They said Mikage would release Hakomari after he finishes a certain Vol of his other work (can't remember the name).

>And do you remember you told me you had found some minor plot-holes? Could you share them? :P
I'll do my best to pull out what I remember.
Tbh, I actually made notes when I first re-read the entire series, i.e. to evaluate the novel in its entirety but I can't remember my exact thoughts when I wrote them.
Do note again that some of these which I regard as 'plot-holes' are partially subjective in nature. I did mention that they were 'minor' plot-holes, but major enough to be mentioned since I simply do not regard very minor mistakes as plot-holes.


Plausible Plot hole: Aya should have noticed that by the start of the iteration that Kazuki was not in love with Mogi. Kazuki falling in love with Mogi was definitely anomalous, which is only possible if Mogi has the capability to retain memories (beautify herself to attract Kazuki, etc.) - In other words, this would have been a plot hole if Aya had retained the memory that Kazuki was not in love with Mogi in the first iterations.
Could be a plot hole if: Aya being able to retain her counting of the iterations, but couldn’t remember that Kazuki did not love Mogi at first. (But IIRC, you only lose the memory of the owner but get to keep other memories…. So AVERTED?)
Possible Aversions: If Aya might have found this out, she ‘still’ may have lost her memories, after all she can’t do anything if killing is the only solution. In other words, she might have suspected Mogi at first but when the time came, she couldn’t kill her so her memories of the owner reset.
Note that this is probably just me reading too much into the plot. I don’t think Mikage could have though this far. But Mikage is a lucky guy, what I originally though was a plot-hole turns out isn’t one when I further examined the conditions. The key here is that “she can’t do anything if killing is the only solution”.

Regarding the ending RESOLUTION:
>Not deux ex machina because O did it to observe Kazuki, he did not interfere at first in order to be able to observe Kazuki nicely.
This is true for the first volume, for every passing volume though this weakens as a reason.

-Tbh, asides from those two, I can’t find other plausible plot-holes for Vol. 1.


(from page 111)
Notes: Kazuki’s move (handcuff Maria) is irrational. The only two persons involved (Yuuhei Ishihara) and Miyazawa are in the same room, the situation is, Kazuki’s body is in Kazuki’s consciousness at the moment, [Yuuhei Ishihara] is inactive. Which means Ryuu is alone. Kazuki shouldn’t have handcuffed Maria, the two of them against Ryuu stood a high chance of success, even if not success, they could easily escape, the betrayal was unnecessary.
Possible counter: The two already have Kazuki’s sister in custody.
Resolution: Seems like it was rendered unnecessary because Kazuki reverts his betrayal anyway. still I can't help but think that the move was simply irrational.

(page 147)
Notes: Miyazawa should know [Riko’s] timeframe as he did previously, it’s weird he doesn’t now. (In reference to Kazuki pretending to be Riko). This might have been due to Miyazawa's desperation though.
(solution still found on the same page)
Solution: Notes: Even Ryuu and Asami do not know of the times that are to be taken away each day. They were able to record (through sheets of paper) the time due to the sudden shifts probably through texting. This is how they are able to make sure that the same time is allotted on the next days.

This wasn't explicitly stated though IIRC, it was only implied through the statements on 147.


(from page 257)
Notes: When did Aya give Nana a box? – probably before the rejecting classroom.?? Which means she knew Kazuki beforehand.? WTH

Well, as you can see it seems like all the plausible objective plot-holes I've discovered weren't actually plot-holes. There were more subjective plot-holes though (referring to their behavior), but I've elected not to take notes on them because I was examining the quantifiable aspect of the novel. You've pointed them out though.

RadiGen Jul 3, 2014 8:54 AM
I've seen Umeniko on MAL but the rating is quite a turn-off haha.
So what are your thoughts so far on hakomari? Make it tsunami on me

My body was not ready.