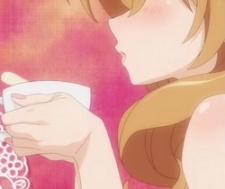 Monad Nov 23, 2013 9:44 AM
You mean my avatar. She's Saya Otonashi from Blood+. Strange you didn't recognize her since you already have the anime in your completed list.

I am completely with you here, although I'm not so sure if any of them will be getting any.

World Only God Knows is probably the one most likely to get a new season, Maid sama has pretty much no chance and Black Lagoon is 50/50

I'm mainly writing here because...I've FINALLY FOUND SOMEONE WITH KINGDOM AS THEIR FAVS!

nelsonbrabra Sep 26, 2013 6:05 PM
My signature is basicaly like yours, so i can't understand the problem.

u should talk with some MAL staff or someone like that.
maybe someone from this club can help u :

Anyway, give me some feedback later ;)

nelsonbrabra Sep 25, 2013 10:39 PM
well, i can see ur signature if i open "http://signature.i906.com.my/x/heracles.png", so i can't see where the problem is.
i see kingdom, dxd, hakkenden, senyuu and watamote in ur signature, and that's exactly like ur history.
is it still not working???

nelsonbrabra Sep 24, 2013 4:26 PM
Hi,Ur signature is from iSignature???
i just copied the link that they gave me there, i dont know how to fix any problem

He got fully revived, a living human now.
I did casually (very casually) read through volume 6, it's about how Alice is the only known one who is dead and buried by gravekeeper but got fully revived. And there's stuffs about him being put in court because being fully revived is unheard of and that it's can be considered a serious crime. Right now, no matter how absurd the wish is, it might be granted, which is very scary, this might even change the way this world works. Some people don't want to change this world because it might save the living but not the dead.
In the end they're alright.

I read it in Chinese site by the way, they translated to Chinese up till volume 7. The Alice using gun and shots while blocked by Ai is all Ai's dream (vol 8). Ai woke up from dream and feel unwell, she touch her chest and realised her heart stopped beating.

By the way, Buzzer Beater allows him to hit any targets that he shoots. It's a skill that Alice can't choose not to use, I mean he can't off the skill so he is always using it when he target something.. That's why he said basketball is not fun for him because he could never miss.