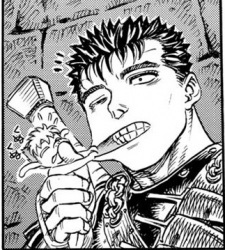 ZechUwU Sep 9, 9:49 PM
Yeah, they get triggered over anime. So don't be so surprised

Zevven Sep 4, 3:58 AM
Don't mind idiots.You must be really narrow-minded to hate certain people for not liking the same things you like.

RebelPanda Jun 25, 6:23 PM
I gotta say my anger was definitely warrented. I'm sure it will lol.

Definitely. He's one of the best protagonists in anime.

lord_of_mangoes Feb 19, 2017 4:36 PM
Reason why I rushed with this review was because I saw other reviewers and community members being way too positive about this series eventhough it had some obvious flaws and there are currently much better series being aired. Luckily review can be edited even after initial post and that is why it isn't really a problem for me.

I thought that characters were one dimensional because f.e Akko and Diana always play the same roles in different episodes.. Akko takes actions without thinking thus creates the problem and Diana always has a solution thus usually ether ends up solving the problem or is too late to solve the problem. Also, most teachers are way too often oblivious to what happens around them and are always too harsh toward students. I can't really say that about other character because I need remeber their characteristics thus I need to rewatch episodes for that..

lord_of_mangoes Feb 18, 2017 11:04 AM
Thank god.. Someone who doesn't like my review but manages to reason why he disagrees with me. I myself don't see it (making review halfway into the season) as a strong reason for not doing a review because usually people drop series in early stages of season and those that see full season usually already have bias for that series.If you would only allow reviews from those that have seen full season you would end up with reviews that are way too positive. I myself probably will give this series another change later this year so I can see how wrong or right I was.. but I don't expect others to do so..

SlayerOfWaifus99 Jan 18, 2017 10:27 PM
I slayed your friends waifu, and now Im going to slay your waifu next ;) So you better go to sleep soon so you dont have to listen

0207xander Dec 25, 2016 4:09 PM
I mean there were underdog elements to it at first (you can't really have a sports show without some underdog), but I thought that after about episode 5 people realized Yuri was legit and stopped treating him like the wreck he was last year. I thought that the romance was done better than you give it credit for, it didn't feel token to me. If it were more sexualized I would agree, but it was very respectfully done and didn't feel like pandering any more than other romances do.

Yeah repetition is my main complaint that I can't really see any justification for. It was just bad.

Both Yuri's were pretty bland and Victor didn't have any faults, but like, that wasn't so bad for me. There were a lot of characters and I liked most of them.

Yeah I mean I certainly have watched plenty of shows where I recognize that it's good, such as YLIA. I don't like those kinds of shows, but I watched it because it's really popular. Surprise: I didn't like it. Oh well.

I haven't really sat down and figured out what I liked about it, but I can say it was charming and I liked it, regardless of quality. First of all, I'm a sucker for a forbidden love story. Second, I liked its unconventional approach to the sport genre. These dudes are already elite and now they're competing against each other rather than they're all bad working to be elite (obviously that kinda happens with Yuri but his abilities are already established). The animation was really excellent in the first and last few episodes and while it did get a bit lazy and repetitive in the middle, I was able to look past it because I liked the characters. I just thought they were funny/interesting.

Basically my summary as to why I liked it are as follows: I haven't been in critic-mode recently where I look for things I don't like, I thought the characters carried the show, and I like the way the show was presented. I don't really have too strong of an opinion about this show as I do about most others, which is a bit strange considering its popularity, but whatever.

I do recognize that its plot was weak and stagnant as fuck, but the rest carried it past mediocrity. I'm not gonna claim it was great nor am I gonna try to convince you to like it. Again, I didn't just adore it and could point out things I didn't like, maybe I'll change my score to a 7, who knows?

Simosis Nov 11, 2016 3:49 PM
That's respectable, wish I could be picky and not be attracted to watching so much trash :[
All Comments