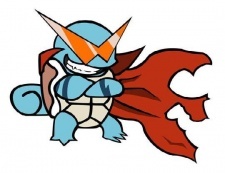 "Is It Wrong to Try to Pick Up Girls in a Dungeon?" was a show I expected to drop by now, but each new episode has a way of making me care more for the two main characters, a weak newbie who wants to become an adventurer, and his patron goddess who couldn't get a single follower before he came along. It also has managed thus far not to borrow *too* much from the recent spate of "I'm totally inside a fantasy MMORPG video game" series, opting to just borrow certain fairly generic elements to build the basic world and then focus on the character development, which has been a really unexpected highlight. So yeah, I'd recommend you check it out if you're in for some light, shounen-y fare with some surprisingly good character development.

"Punch Line" is a show which, to be fair, I was anticipating as much as any original show this season, right behind the second season of SNAFU. But what I was not expecting behind all the crazy anime silliness was a distinct sense of originality, braced by an unexpected level of moderation in the ecchi content of the show (especially given the show's premise). It's refreshingly original, the characters are all interesting, and it successfully maintains a good balance between slowly revealing enough information to keep the viewer hooked, while still holding enough back for the occasional surprise plot development. Plus, the animation and character designs are all really distinct and interesting, very similar to what Studio Trigger usually does. The show definitely marches to the beat of its own drum, which is extremely refreshing amidst all the pandering that characterizes a lot of this type of show every season. I definitely recommend it so far, with the caveat that due to the way the plot is being revealed, it would be extremely easy for the writers to muck up the ending with a bunch of anime nonsense, instead of properly weaving the various characters' individual story threads together into the main thread and finishing with a cohesive whole. They haven't shown any signs of doing that yet, but it is still early, so the caveat stands.

All that aside, I noticed you've watched the first episode of Ninja Slayer From. How is that? It looked really interesting when I saw the previews for it.

orcmonkey2000 Aug 25, 2014 5:40 PM
Another funny anime in a similar vein to Azumanga Daioh and Nichijou is Kill Me Baby. Its humor is different, more along the stupid and slapstick route, but it is still funny. Also, its ending song is so catchy it isn't even fair. My brain did not have a chance.

Mmm ask! You never know!
PS: I know you'll never get me into costume. xD

PRESSit Apr 24, 2014 9:18 AM
Any concrete plans for your future beyond dentistry? I find It's fun mapping out what we want to do!

You sounded anyone out about the idea? How were their responses?

I know last year, check out my anime list/profile. Which shows are you talking about the year before? Time for some more fun. :)

Sure do that! I'll be happy to recommend good stuff.

Also, if you guarantee your swift return to Lynchburg, I may be willing to lend you my copy of the Steins;Gate visual novel, if you have the time to play it this summer. It is a 40-50 hour game from what I've heard though.

PS: Also, how are the Berserk movies?

orcmonkey2000 Apr 22, 2014 8:57 PM
I see you finally changed your gender back to male, in the process probably disappointing not a few individuals. :P

I thought the quality of the best shows last year's been really amazing. Shinsekai Yori, Sekamichi no Apollon, Psycho-pass. All totally fantastic! Agree that SnK was a totally crazy roller coaster from start to end!

Good job on that. How're your plans? Any idea where you're looking for a dentist position?

Many of the anime adaptations can't even compare to the original manga or light novels. The originals were crazily good. Good case in point: This season's mahouka compared to it's light novel version.
If you ever need recommendations i'd be happy to help!

Rukayex Apr 21, 2014 6:09 PM
Hi xD It's going okay, tons happened and are happening, and I changed my mind and am currently aiming for a PhD in Biochem. Not sure what I wanna do with that yet though..

What's coming up after school for you?

It was fantastic. Caught me hook line and sinker. And here I am.
All Comments