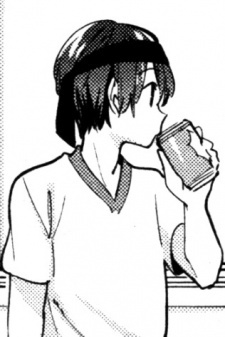 Cazador is still fun no matter how many times I watch it, to be honest. Noir is kinda oddly directed, as is Simoun, though. Early 2000s anime quirks.

I haven't watched any of the second season because I feel threatened by the fact that Kumiko apparently jumps ship to Asuka or something. lol.
I haven't! What're they like?

Louella Dec 28, 2016 11:59 AM
Oh my. I want to read this. I'm sure I'll buy all novels connected with Hibike which will be translated.
The ending of Hibike was beautiful. I love this anime. :( I was waiting all week to see this episode. Although Kumiko wasn't wearing hairpin from Shuuichi, I enjoyed this episode very much. I liked the most part when Kumiko talks very softly "Hibike Euphonium" in the end and the last talk with Asuka. It was so touching. Without any doubt one of the best anime I have ever watched.

I liked episode with Reina. It showed us how much and why does she like him. I love that they pay much attention to details like changing glasses by Taki. :) That's cool. Camera movement was intense in this episode too. The last sequence looks beautiful - this one with eagle(?).
12th episode was much better than the previous episode. Reina's confessions of love were amazing. My brave girl. :) Do you think Taki knows what she wanted to say by her "watashi honto ni sensei no koto ga suki nan desu"? Or maybe he took it as words of admiration?
Kumiko running toward her sister was pretty good scene. Shuuichi look on her showed that he really cares and thinks about her. The scene where Kumiko and Mamiko were was brilliant. Their love almost flow out from the screen. :)

I'm waiting for the next Hibike episode... PV seems really good. I hope for some Natsuki, Taki, Shuuichii and Reina moments in this episode. What do you think about that they did not show us the last Kitauji's performance? I saw that some people didn't like this.


I didn't put anything to my dropped list some time ago but I have thought that I don't want to waste my time for series like Hitori no Shita or Hatsukoi Monster. There is a chance that I will return to these series but I'm not sure about it.

I watched Emma because of positive review I read in some site. Subtle relation of Emma and William, music, victorian times - it was pretty good. Especially in the first season. I didn't like the end of the first series though.

Eupho-kun the anime:
Kumiko's voice actress is amazing. I got a gooseflesh when she talked with Asuka in 10th episode. I think this conversation is one of the best scenes I have ever watched. Very emotional. And that smile. Asuka's smile. When she realised that Natsuki really wanted her to come back, to play euphonium on Nationals. It showed us that she realised that not everybody wears masks *cough like her cough*.

After 10th episode I can't stop being impressed by Kumiko's character and development. I love her right now. In first episodes of first season I thought she's fine and I liked her but now... She changed herself very much since 1st season. She is still a bit cynical but she's much more honest with her own feelings than before. I didn't even think about her crying in front of people in place like train. Of course it was intense expirience to her. She really loves her older sister. I hope her relations with Mamiko will be even better than now. Thanks to Shuuichi Mamiko will come to the Nationals. I can't wait to see it. ^^

It seems like now is time for Reina's arc (probably Taki's arc[?]) and of course Nationals. I still hope for Shuuichi arc. I know those episodes will be great but it's sad that Hibike will end very soon.

I will be praying with you about Rikka adaptation.
~Please, Kyoani-kami, listen to our prayers.~


Occultic;Nine is very enjoyable show to me. Even their conversations were interesting. But it's not the first time when I really don't understand people's point of view.


Because i found it more comfortable to me. It annoys me when I have twenty-couple of episodes in "watching" but in "on-hold" it didn't disturb me that much. I know it's weird but that's true.

It's something like my not-entering-on-mal-record. xD But I haven't got any long break with anime.

Hibike:
I thought Kumiko live in house, not in flat. XD I really surprised me.
Ofc, I don't mind. ^*^
I thought that Shuuichi and Kumiko will be closer to each other after that fist bump. But...nah.

You may be right. I don't really know what's in Kumiko's mind. It looks like she likes (not like a lover :(, maybe more like a friend) Shuuichi but she doesn't want to be attached to him. And she looks like she doesn't want to talk with him that much. She never look for him and anything like that. Sadly she seems to be not interested in Shuuichi in that moment (or she is not showing this, what could be true).
-you said (xd) - : "Kind of like friends that maybe once you used to be really close with, but now barely talk to, if at all; it’s not that you don’t care about their existence anymore, but for some reason you aren’t able to get along and be involved with each other as much as before." <---- it looks exactly like that...
I think I understand what are you talking about and I mostly agree with you. :D But I still want to think it's more than that.
That's interesting. Kumiko is deep character. I want know more about her and I'm curious about her personality. She intrigued me.


I watched four episodes of Occultic;Nine and I really liked it. First minutes of first episode was confusing but it's well directed (at least 4 episodes xp). I don't regret it. I just can't get it that it has really low score on MAL. x.x It's strange. One (or maybe two) thing(s) I don't like in this anime are Ryouka's boobs. God, it's strange. XD

It makes sense, don't worry. For sure more sense than any of my replies has ever had. :D

edit: I watched nine episode of Hibike 2 and it was purely brilliant.
Woah, Asuka's story, her mini performance, Kumiko's resoluteness. And Reina's reaction for Taki who brang keys from her hands. Camera movement in this scene was awesome :o
I enjoyed this episode a lot.

What do you think about eight episode of Hibike? I enjoyed this scene where
Shuuichi told Mamiko that Kumiko wanted to start playing on instrument because of her. It was very kind when he tried to reconcile them.

Me too. I don't want it to end up after second season. :( It's too good to not adapt the rest of books. I didn't hear a lot about Rikka's spin-off but I'm convinced it's good. Oh, Kyoani, please, adapt these novels.

>Oh, in that case I will start Occultic;Nine. I didn't know if i should do it, but your opinion convinced me.
>ViVid Strike! - really? XD lol
>Shuumatsu no Izetta isn't that interesting to me as it was earlier. Finé and her relation with Izetta is the best in this anime.

I'm not good at writing in English, I can't express everything what I want to. I also write very slow to someone in this language.

Yesako Nov 15, 2016 4:01 PM
Yamada is cuh-razy. The amount of detail put into it would be great, but, like, that woman is CARAAARSZYYHGD

Yes, I know what you fell but now
I think that Reina really likes Taki (that's kinda sad because in 6th episode it was shown that there is no hope to see them together - age gap, student-teacher, he still loves and thinks about his life. I think is too much to reach his feeling deeply. I don't think that could be cool to see them together but I feel sorry to Reina. She seemed serious.
I think that Kyoani crossed the line in Reina's and Kumiko's friendship (I mean only blushing and sighing but it's many enough). Someone wrote in MAL's forum that Shuuichi has more "moments" in novel. :v I would like to see those in anime. In 2nd season he really had a little screen time (he had almost no screen time through 6 episodes...ugh). We didn't see him with Kumiko. It looks like she's not thinking about him but shh... I hope they will develop his character or just leave him alone. Without any pairing. :p
But to be honest I don't think that Kyoto Animation will show us "who loves who" in this season. :v

Ech, I'll leave it Kyoani. But I really want to see more season of Hibike. I absolutely love it!

Ofc, feel free to write when you'll get better. :)

ADOLESCENCE. how about no LOL

lmao I'm just not watching it

I'm only on 5 of Takkyuu aaaaaaa

The fifth episode contains performance without any talking, thoughts and something like that. Pure gold. Now I like Kumiko much more than ever. She is changing, she's developing - like everyone in Hibike. I think it's not that easy to create that good characters. Kyoani does very good job.

I was very excited about sixth episode. It's one of my favourite episodes from this season.
Shuuichi x Kumiko rules
To be honest, I thought about pairings in Hibike and I think I would like to see Kumiko with Shuuichi. But as far as Kyoani do the show, I can be sure it will be great. They shown us many times that they can.

Yeah. This season is really good.
My favourite one is ofc Hibike 2. I like also Yuuri on Ice very much. It contains a lot of comedy, figure skating and a little too much fanservice >Vitcor <3. Opening and ending are awesome. It's one of the most enjoyable series for a long time.
I like every series I'm watching this fall.
Flip Flappers is amazing. Really original and I never know what will be next. I'm curious about it. Good series.
Girlish Number is interesting to me because I like to know more about being seiyuu. I always wanted to know more about it. And this anime show us more than usual /cute girl doing cute things/. I don't like main character, but she is well created. I'm looking forward new episodes.
Mahou Shoujo Ikusei Keikaku is much more better than I thought it could ever be. If they won't destroy what they did, it could be a good series.
I like Shuumatsu no Izetta but I don't know which route it'll choose. I can't up my mind but I like it.
Keijo eight interjection is very funny. I thought it will be just a crap but it looks like they are doing fun from ecchi. It may be cheap but really makes me laugh.
Watashi ga Motete Dousunda isn't that bad. I like it but it isn't as good as the rest.

What do you think about 6th episode of Hibike 2? And the other series of fall?

I'm not watching Izetta I heard it was boring lol

Don't worry about it Nao's route is the best route