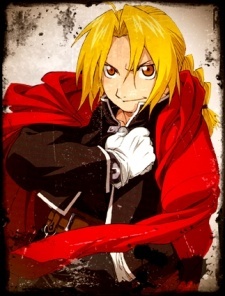 DailyDoseofAnime Jan 24, 2021 11:00 AM
i love fullmetal alchemist i saw it when i was hella young that i dont even remember my age

Ihatemidwits Oct 29, 2020 8:55 PM
STORY
7/10
Azumanga Daioh is a show about nothing, literally. Think of it like Seinfeld, but with high school girls and as much hilarity, and you've got all the bases covered. The episodes revolve around six girls and their daily life at a high school, which always ends up being random in some way.

The comic formula is hilarious. Many scenes will make you scratch your head and wonder "eh?" while simultaneously laughing, while other scenes make you laugh by repeating the same thing over and over and over and over, far past the point where you think it should have just stopped the joke. The best comic relief was definitely the male teacher who was always hitting on the girls, who had a trademark jaw drop constantly. He would randomly be thrown into the episodes very spasticly, making anyone with a sense of humor laugh out loud. So really, don't go into watching Azumanga thinking you'll get any sort of a plot. There are only a few episodes that are linked somehow, but the rest do follow a timeline (the girls making their way through three years of school, up to the satisfying conclusion).

Art
6/10
The animation is really simple and clean which fits the style of this anime, but I don't like this kind of look. There's nothing too impressive about it.

Sound
6/10
The music in this anime was alright sometimes bordering irritating, I wasn't too fond of the opening it just sounds irritating with the high pitched voices but I suppose it goes with the show. The background music started rubbing me the wrong way after a while.

But from what I recall it's mostly silence since they have such long silences after a "joke" which I didn't find that funny. They would have these ridiculously long pauses after a joke and I'm just sitting there still bored to death and I'm like was that supposed to be funny? Is someone supposed to be rolling on the floor laughing from that?

The seiyuus all did a good job portraying high school girls and especially Chiyo-chan.

CHARACTERS
9/10
The character development was basically non-existant, yet I still gave this section a 9. Why? To put it bluntly, Azumanga Daioh has some of the most hilarious characters I've seen, who all fill their incredibly exaggerated role perfectly. Chiyo is the little girl who is the epitome of cuteness. Her voice helps with this persona, as well as giant watery eyes when she gets upset, and her little girl ways of doing things. Sakaki is obsessed with cute things and is super quiet, and always blushes whenever she sees a cat or dog, yet (for the comedic effect) she always is bitten when she tries to pet things. Tomo is the most obnoxious character by far and is always yelling and pissing people off. Yumi is probably the least developed character -- her one quirk is that she is obsessed with her weight. Then there's Osaka, an extremely slow and stupid girl who tends to always make you laugh with the idiotic things that come out of her mouth. And finally, Kagura is athletic and competitive. These six characters are fairly extreme to begin with, but them morph into super extreme characters by the end of the series.

The entire series is about pushing the limits of comedy, and the characters help out with this immensely.

OVERALL
8 / 10
Azumanga is a great watch for any fans of comedy. Out of all the random series I've seen, Azumanga definitely has the highest concentration of randomness and laugh out loud moments, combined with hilarious characters and wacky moments alike. If you like comedy series, I can't see why you haven't watched this yet! And if you haven't, pick it up right now, since you'll surely like it.