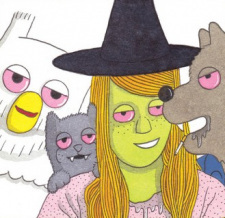 yukkii May 9, 9:10 PM
i finished my semester from hell so hopefully i get back into anime this summer

yukkii Jan 22, 2019 11:04 AM
i saw on twitter that someone said there hasnt been enough chapters released yet for them to make another anime at the same length as this one, so that could be a thing ;-; yeah the whole thing with kurapika and leorio is kind of weird because i think gon and killua have technically spent more time with the chimera ant arc characters than they have with kura and leo?? but whatever i still like them. if the manga is fucked up then i dont know if my heart can handle it. maybe ill just watch the 1999 version lmao.

yukkii Jan 21, 2019 9:34 PM
so. i did it. i finished it. i am a shell of who i once was. what an experience. meruem and komugis death broke me. ging is kind of a dick but im glad gon finally met him so that he can be inspired to be a strong hunter. overall really great show but i have some questions/complaints. the election part was kind of annoying. the chimera ant arc was also kiiiiiiiind of anticlimactic bc literally not even a nuclear weapon could kill the king, but then what finally does him in is some poison? i understand that he became more human in that time and his final moments and everything he learned were very dramatic and moving but at the same time...... i feel like there should have been more to it. maybe i just need to think about it some more. another thing, why didnt they show hisoka in the ending??? everyone else kind of got a conclusion in the ending sequence but they didnt show hisoka at all, the last we saw of him is when he decided not to kill alluka and killua when illumi had cornered them in front of the car. so like.... where is he??? whats he doin?? WHATS KURAPIKA DOING??? is there gonna be a continuation????????? it says this show stopped airing in 2014 and its been 5 years so are they not gonna continue it?? if not ill be really sad but mayhaps i will read the manga. hmm what else. ... im also confused about kite's rebirth or whatever in that red haired girl because kite's body was never eaten?? wasnt it being used as a puppet? so how could the queen have eaten him and transferred his soul into her child? did i miss something? i mean im glad his soul lives on but thats confusing. wow this rant makes it seem like i dont have anything good to say. i promise i really loved the show it was very intense and emotional and that reminds me! why did gon and killua have to separate from each other???????/ things used to be so simplle and nnow its all sad and IM SAD and i just want them to be best friends and go on advenetures together ;;;;;;;; i dont know what to do with my life anymore but im going to dsee the movie in theaters at the end of the month even though it came out liek years ago because i want ot see my little boys on the big screen

yukkii Jan 21, 2019 1:29 PM
bro its fucking crazy. literally all i feel is dread watching it because i dont know whats going to happen and things keep going wrong and killua is SO SAD so therefore IM REALLy SAD and im readdy for it to be over!!!!!!!!!!!!!!!!! the fight with the king and netero was really amazing and this whole arc has been insane but it really is making me want to die so im trying to finish it but as we speak i just finished the episode where gon turns huge to kill pitou and im crying blood hes just a little boy he shouldnt be going through this hkfjkanf im taking a break because my chest hurts from dread and pain this show has caused me and i have work to do but hopefully by tonight i will have finished the chimera ant arc. some general thoughts since i last talked to you about the show: knuckle is literally just a jojo reference so i love him very much and i also love ikalgo, really i lvoe all of the characters so much and i want to protect them i dont even mind the royal guards EXCEPT FOR POUF he can go die but i like the king and komugi even though i want to wipe her nose so bad. colt has a special place in my heart and i want to see him again. rest in peace kite i cried my eyes out many times for him. mostly this whole arc has made me so sad for killua because hes so sad the whole time and i just want him and gon to be close again and i want to wrap them up in blankets and make sure they never see any harm . thats all

yukkii Jan 11, 2019 5:02 PM
so here's an 80-episodes-in status update on my feelings about hxh. gon and killua are still great boys and im very soft for them. if anything happens to them ill kill everyone and then myself. kurapika is a bad bitch and the yorknew city arc has been my favorite so far. hisoka is sexy even though he's a pedophile and i want to see more of him. i didnt care for the greed island arc that much because the card concept/villains were kind of boring to me but i really loved bisky and all the training that they did. i want to see more of killua's family and i want to see ging already even though he kinda seems like a douche (like i know they keep having people tell gon stories about how great he is but damn bro just meet ur son already). i just started the chimera ant arc which is weird as shit and i heard that it starts slow but is overall a really good arc so im divin in. but i know its a super long arc and i have a feeling that my main bitch, hisoka, isnt going to be in it all so i cry but i will make it through regardless. i want to see chrollo fight some more because the fish power thing he has seems really interesting. i think thats all i have for now but i love discussion so pls indulge me