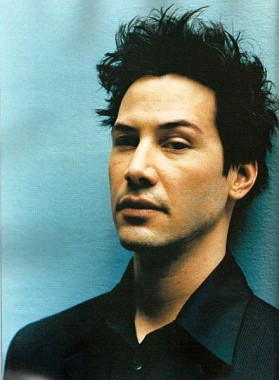 Keanu Reeves has confirmed that he is indeed involved in the live-action adaptation of Cowboy Bebop. Reeves recently spoke with MTV and confirmed his involvement. Reeves shared some details on the project as well:

“We’re taking the Red Eye [story], the beginning part of the series,” he explained, “and then we’ll deal with the end of the series. We’re trying to figure out [the time frame]. We’re looking at the story right now.”

“Yeah, it’s so episodic and so disconnected. We’re trying to figure out what pieces to put together to tell one story,” he explained. “Because it’s such a short form, to make a 2 hour version [will be tough]. And it’s got so much of an origin-story obligation; you’ve got to get people up to speed, but you don’t want to do much of that. There are a lot of things to take into consideration, but we think we can do something good.”

There is no official word to what role Keanu will be playing, but he hopes to play Spike Spiegel. The film is being produced by Erwin Stoff and an unannounced writer is working on a screenplay.

For some more info:

They're both awful actors with poor range.

Cage always has that "resigned surprise/deer in the headlights" expression with slight mumbling and when he tries to smile or have an outburst of anger it doesn't look authentic. He could pass for a creepy geek or a bipolar psycho, but definitely not the cool type.

Keanu has that "blank stare model" look, and the most expression he's capable of is the "surfer dude smiling cheek to cheek". Maybe he could pass for the cool/aloof type, but definitely not for deep, which would be required at some point.

They're both the skinny types, that's about it. Then again, I'm not sure if I'd like to see the live-action movie made, the animated movie was enough of a let down.

Allecto said:
Ugh. Too old and too bad an actor to play Spike. He may surprise me though, I for one thought that Heath Ledger would never be able to play character like the joker, so anythings possible I guess.

Weeell, Spike could've been like...Nicolas Cage. How strange would that be?

Ugh. Too old and too bad an actor to play Spike. He may surprise me though, I for one thought that Heath Ledger would never be able to play character like the joker, so anythings possible I guess.

Good news for once.

Regarding Keanu Reeves, people should watch A Scanner Darkly to see the better side of him. It's sort of animated anyway so good for people interested in anime :). The real issue is his age - he might look too old by the time the shooting starts xD.
Other than that I'd want it to be without budget cuts (Firefly MMO is almost impossible for the same reason - too much content). My only problem would be if it was bad but people liked it (like most of the P.K. Dick “adaptations”). If more people watch good anime because of a live action film then it's ok, I suppose.

Probably for the best then.

Naruleach said:
bergil said:
There's a good chance that this movie will be (or is) cancelled.
Source? From what I've heard, the script was written but it would cost too much money to make, so it is now being re-written.

bergil said:
There's a good chance that this movie will be (or is) cancelled.
Source? From what I've heard, the script was written but it would cost too much money to make, so it is now being re-written.

There's a good chance that this movie will be (or is) cancelled.

Warning - Wall-o-text - Warning
Those with short attention spans please see Emergency TLDR at the end of the post.

Keanu isn't the worst pick to me. I get frustrated because I would REALLY like to think Christian Bale could take the part.

I think when people hear his name brought up they get a little biased. Mostly because the interwebs savvy bunch associated with animated media is well aware of is incredible ego, e.g. Terminator 4. However, most people still hold him in high regard as an actor, as do I.

Take the parts relevant to the media and the more I really want to believe he can pull of an awesome Spike. He has played some very incredible roles as characters maintaining an outward image with brooding and introverted psyches - The Machinist and American Psycho.

Next, he has had numerous roles as an action star. The first I want to point out is the one I feel has the most relevance, Equilibrium. Don't get me wrong, I'm not pointing to the sci fi/supernatural aspect of the film, rather the gun-play/martial arts foundation of the action. Another film I'll bring up and have to explain is Batman. This is one that actually frustrates me a lot because of the dreaded Batman voice. Christian Bale would study the series in English Dub which is good because I think we can all agree that Steven Jay Blum IS Spike Spiegel, but it is logical to think Bale would try to sound like the best Male English Voice actor ever (sorry. fanboi.) and fall fatally short. I think he could capture the subtlety of the voice well enough without trying to ,but that he would try anyway to match the material and destroy the atmosphere of the movie. Terminator 4 plays into this slightly but is definitely the least relevant.

I think the last part I want to bring up is appearance. This part is the one that divides me the most on casting him. The pro for this aspect is that Christian is unmatched in Hollywood when it comes to morphing his body to take a role. The slimming down for The Machinist and The Fighter and building back up for Batman, not in that order mind you, are some of the things that I think endear him to people as an actor. Since recently slimming down for The Fighter I think the timing is perfect for him to sculpt a great slim and tight look for the part. He already has the height as well. The part I don't like the most and what I think most people will point out is he just doesn't LOOK like a Spike. I don't think there is anything you could do with the mans hair either. Ultimately, the most important part and I just don't know if he could strike me as a Spike when I look at him. If your still with me, any thoughts?

This movie's gonna be polarizing any way you look at it, but I have pretty decent hopes for it. I was a little wary about Keanu Reeves taking up the part of Spike myself, but I don't have any serious problems with the guy's acting and it's good to see an actual fan of the show (if what he says is any indication) taking up the part. And honestly, with Watanabe and Nobumoto on the project, I can't say I'm too worried.

Now, all I need is to see Yoko Kanno's name somewhere in there and I'll be ready to have faith in Hollywood again.

they're gonna massacre this.
It's gonna be like the live action for air bender and dragon ball.
I'll check it out due to my love of the series, but i don't think there are actors that can give you the same feel as the originals. Also, the people they are choosing for the roles so far?? *shudder*

Hmmm i happen to like Keanu Reeves but i have a hard time time imagining him as Spike o.o

I'm interested in watching this play out... but truthfully I love the series so much that the end result could TECHNICALLY be a great movie and I'll be like instant critic from beginning to end credits ;_; No one will want to see this movie with me.

Reeves seems genuinely interested in the whole story, so I think he'll act the hell out of Spike. I'm interested in seeing who'll be playing Jet and Faye.

Thank god the original writers are on board. At least they can give us some hope that this won't be butchered and turned into an utter crap fest like Last Airbender. I still shudder after watching that train wreck..