In this episode of Akagami no Shirayukihime, our heroine faces another hurdle that prevents her from seeing Prince Zen. The determined girl must now prove she truly belongs beside Zen inside and outside the castle. 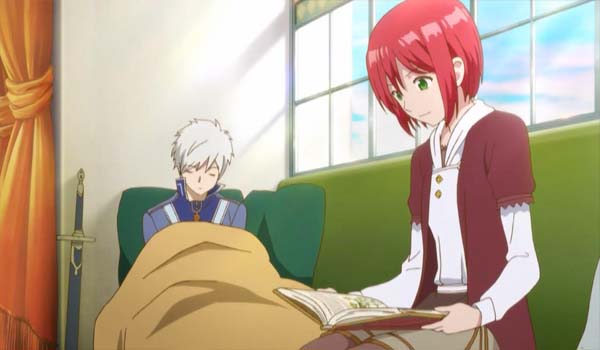 This episode focuses on Zen and Shirayuki's social status. It starts with Shirayuki asked to visit the castle. She notice that people should have an ID to enter the castle but she is given special permission. Since she is a guest of prince Zen, Shirayuki can enter the castle without the guards stopping her. Her visit this time is to help Zen's spirit after being swamped with a lot of paperwork. Zen has entered a long state of depression because of his work. His two close companions, Mitshuhide and Kiki, decide that a visit from Shirayuki will get him back into shape. The two of them talk about Zen worrying he would only be a prince by name. He sneaks out of the castle to visit the town and see the state of his country with his own eyes. Paperwork in the castle is preventing him to do that though and he is feeling a bit bothered by it. Shirayuki applauds his sense of duty though. Zen then went to sleep and it's a sweet moment knowing he trusts Shirayuki enough to sleep beside her. He sleeps for a long time and Shirayuki leaves without saying a word. 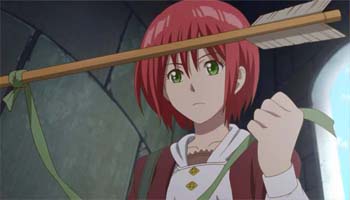 Trouble starts brewing though when Shirayuki overhears one of the castle personnel relaying an order to not let her inside the castle. It is a direct order from prince Zen and Shirayuki couldn't believe it. The order states that her status would cause problems for Zen when his retainers find out he is giving special privileges to a commoner. She doesn't take this news lying down. She immediately tried to confront Zen about it. Her doubts turn to fear though when she is suddenly stopped by an arrow on her way to Zen. It strikes the wall and it relays a message saying she shouldn't go near the prince for her own safety. Shirayuki recently jumped off a second story window without thinking twice so naturally, a threat to her life is something she shrugs off. She grabs the arrow and continues to Zen's room. The assailant that fired the arrow is ready to take a more direct means of stopping her but Zen appears before he could act. Shirayuki and Zen talked in a private room. Upon knowing that Zen did not relay the order, she wants Zen to back off while she go confront the person that want her out of the castle. Zen could only say yes after seeing her determination. 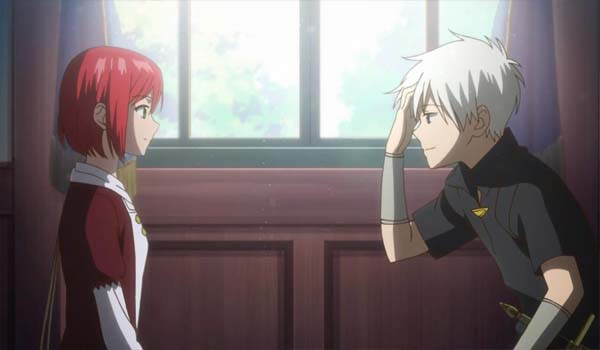 In the hallway, she ran into Marquis Haruka. He is introduced early on as someone calling Shirayuki's red hair as a vulgar color. He is indeed the one that wants her out of the castle even voicing his concern to the prince. Zen didn't take him seriously so he took matter in his own hands. He ordered one of his soldiers to stop Shirayuki by any means. Haruka is surprised to see Shirayuki in the hallway and told her only authorized people can enter these halls. Shirayuki responds that she was invited in and she would happily take him to the person that let her in. Haruka then drew his sword and points it directly at the girl. Haruka explains that intruders should be dealt with immediately and threatens that he will hurt Shirayuki. She is, of course, unfazed. She even dares Haruka to hurt her if he truly thinks she is telling lies. She steps closer and closer to Haruka. The guy has no choice but to raise his sword…. 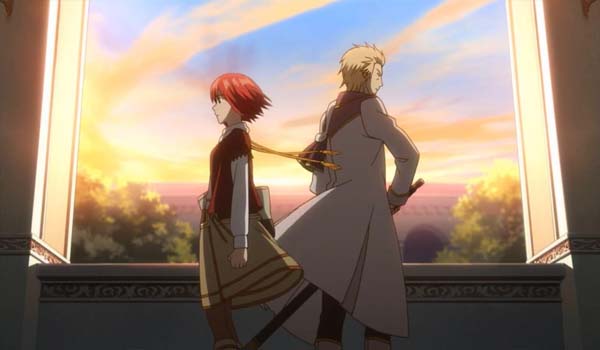 ..and puts it in its sheath. Shirayuki has convince him that she is no intruder. More so, she also convince Haruka that she is no ordinary woman. After this confrontation, the assailant reveals himself and openly admits to seeking harm to Shirayuki. Obi, the assailant, wants to save Haruka the humiliation of trying to hurt a close companion of prince Zen. Haruka calls Obi a liar though and admits he ordered the hit. This is when Zen appears out of his hiding. He was secretly listening to Haruka and Shirayuki face off. Satisfied with the events that transpired, he simply explains that he values his relationship with people like Haruka and commoners like Shirayuki as well. He then warns Haruka that he should act like a noble fitting of his status hoping this can never happen again. Haruka simply nods and leaves. The episode ends with Shirayuki admitting that she wants to be with Zen through proper means. She then reveals the Court herbalist form and tells Zen that this is the proper way for them to meet. She will take the exam and be an employee of the castle. Shirayuki and Zen then stand side by side once more after conquering another hurdle to their relationship. 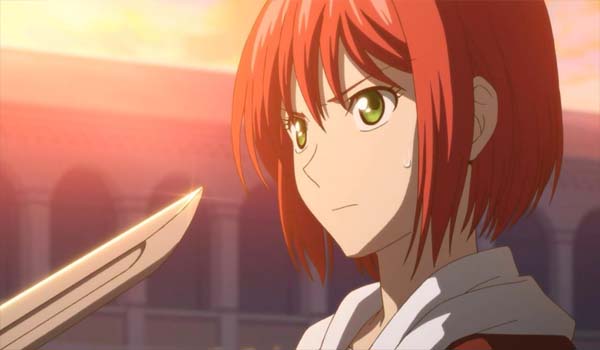 Once again, Shirayuki is a beautiful standout. This girl knows no fear as she would walk straight into danger. A lot of people will continue to underestimate Shirayuki because she is a girl but she will prove them all wrong. Haruka expresses that a girl like her might only be around Zen so she can get special favors from the prince. It's easy to see other people would think cheap of Shirayuki as well but this girl does her best to convince them otherwise. The best moment of the episode would be when she confronted Haruka. With no help from Zen, she bravely took the challenge head on. Even with a sword pointed at her face, Shirayuki just meets it with unshakable determination. 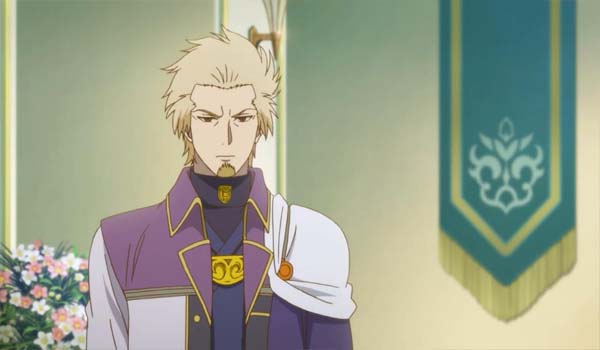 The show is still pretty mellow trying to establish elements of the show. For now, one notable moment would be a "royal" antagonist that tries to pry the couple apart. It's not as powerful as Zen's brother or parents but Marquis Haruka gave us a glimpse of how the nobles play. They'll hire muscle and use their status to put Shirayuki in her place. It'll be exciting when people of higher status start interfering with Zen and Shirayuki's blossoming love. I respect Marquis Haruka for accepting the blame though hoping to spare Obi of punishment. He has a sense of pride that might someday starts supporting Shirayuki and her goals. He was impressed by her strong spirit so I hope he returns the favor, as his pride dictates. 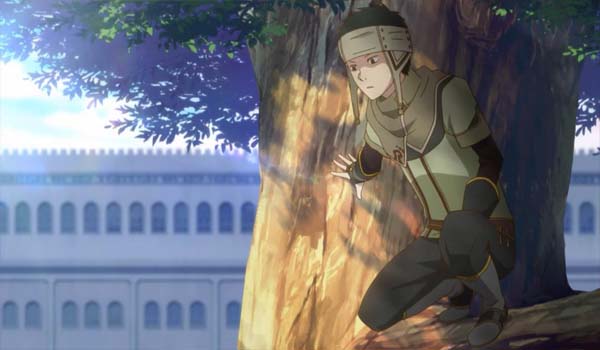 Shirayuki will take the herbalist exam soon. Expect some foul play to happen when a noble would mess with Shirayuki's test either underhanded or directly in front of her commoner status face.

The king is mentioned casually in the episode setting up something big involving him and prince Zen. It's all speculation for now but it'll be an interesting hurdle when the king himself starts interfering with Zen and Shirayuki.