Is There Love? Fairy Tail Edition

Amidst all the action and adventure within the Fairy Tail series, there blooms buds ready to spring forth flowers of love. There are still some character pairs that may or may not get there in terms of a relationship. Is there a possibility of love for these characters? You decide. 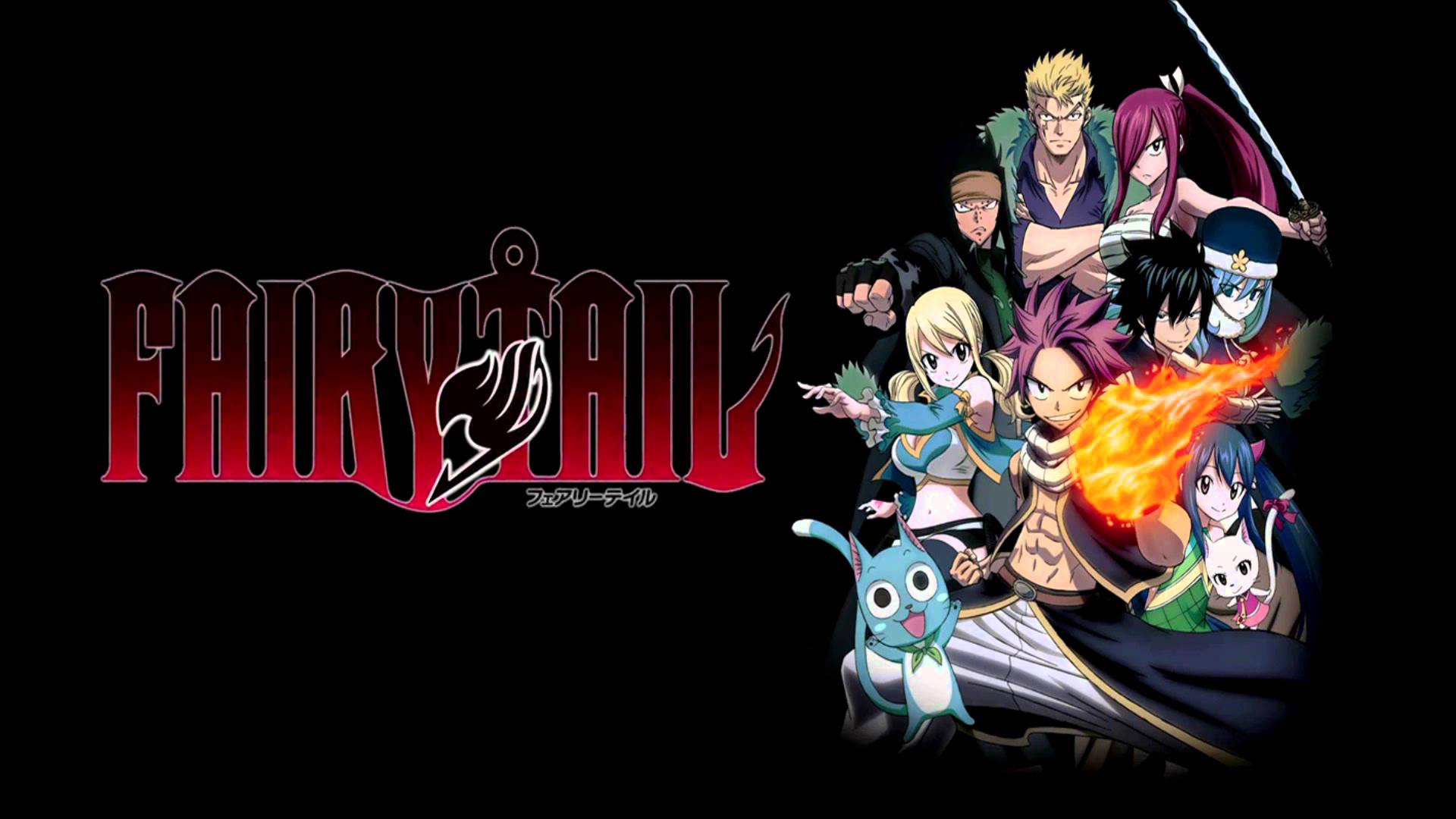 With all of the exciting battles and adventures in the Fairy Tail series so far, one cannot doubt the fact that the bonds between members grow stronger after each trial. The Fairy Tail guild itself and even the other guilds out there have learned the meaning of family in protecting and defending their homes and friends. The pressing concerns and threatening characters that appear consistently deter most of the characters away from any deep relationship and commitment. In some scenes though, one cannot help but notice the chemistry and tension some pairs have whether it is related to the mission or not. Putting exaggeration aside, especially for the fact that people tend to be biased to a certain couple in any anime series; there have been some pairs in Fairy Tail that leave you with a sense of possibility when it comes to love.

Only time will tell if anything is to happen with these characters, so this is probably the best time to speculate. Which of these pairs would be a good bet when it comes to love? 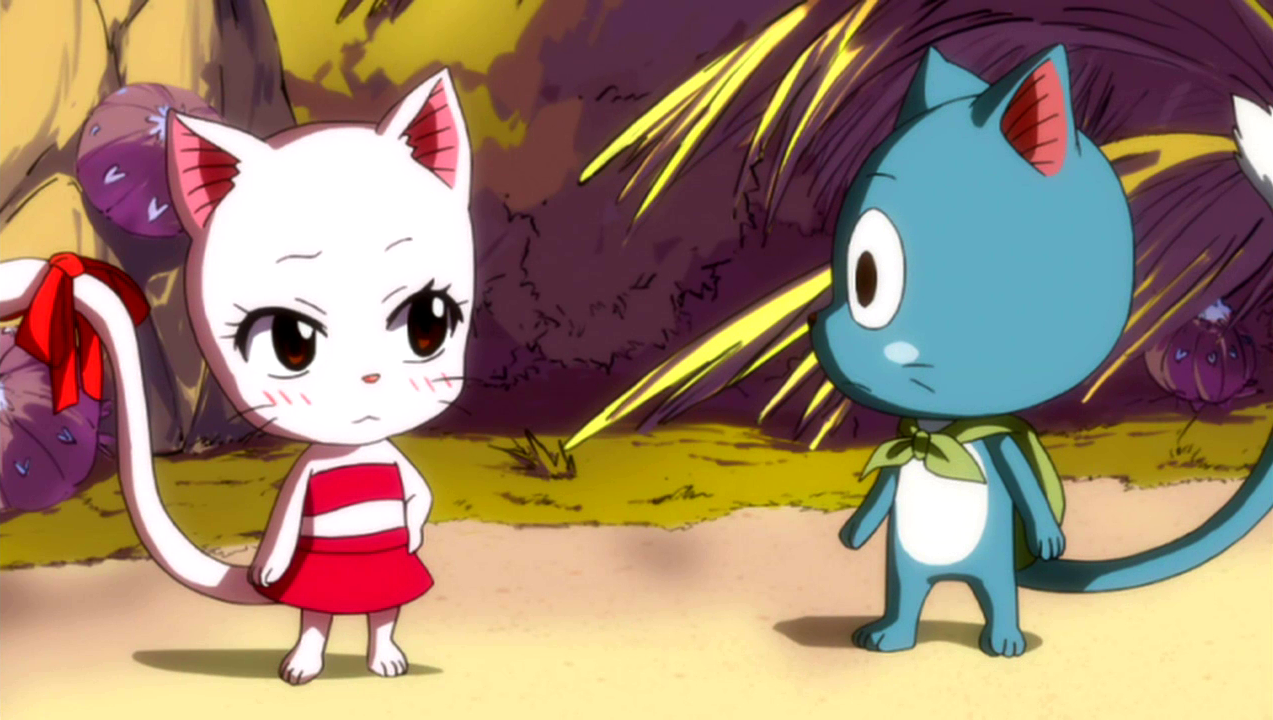 For the longest time Happy thought that he was the only one of his kind and it was evident for a good portion of the series. The guild's encounter with the Dragon Slayer Wendy and Carla changed all of that. Not only did Happy meet another one like him but it was also a girl. They would later find out that they are from a race called Exceed and that they are not from this world. Every dragon slayer in the series seems to be accompanied by an Exceed, and they are good both as companions and partners. While Happy is as his name denotes a happy character, Carla is somewhat serious and calculating.

When Happy first saw Carla he immediately fell in love with her and even offered her fish. Carla didn't seem interested at all and ignored most of Happy's attempts. This didn't stop Happy from trying to win her. We would later learn that Carla's scorn was actually brought about by Happy's ignorance of their origin and home, Extalia. During the Edolas arc Happy stood up for Carla defending the both of them against their home and other Exceeds. Carla seemed to soften after this arc and is now be a little more open to Happy. Nothing has been significant though even with Happy's obvious attraction for Carla, but he still considers her as a very close friend, maybe even more. 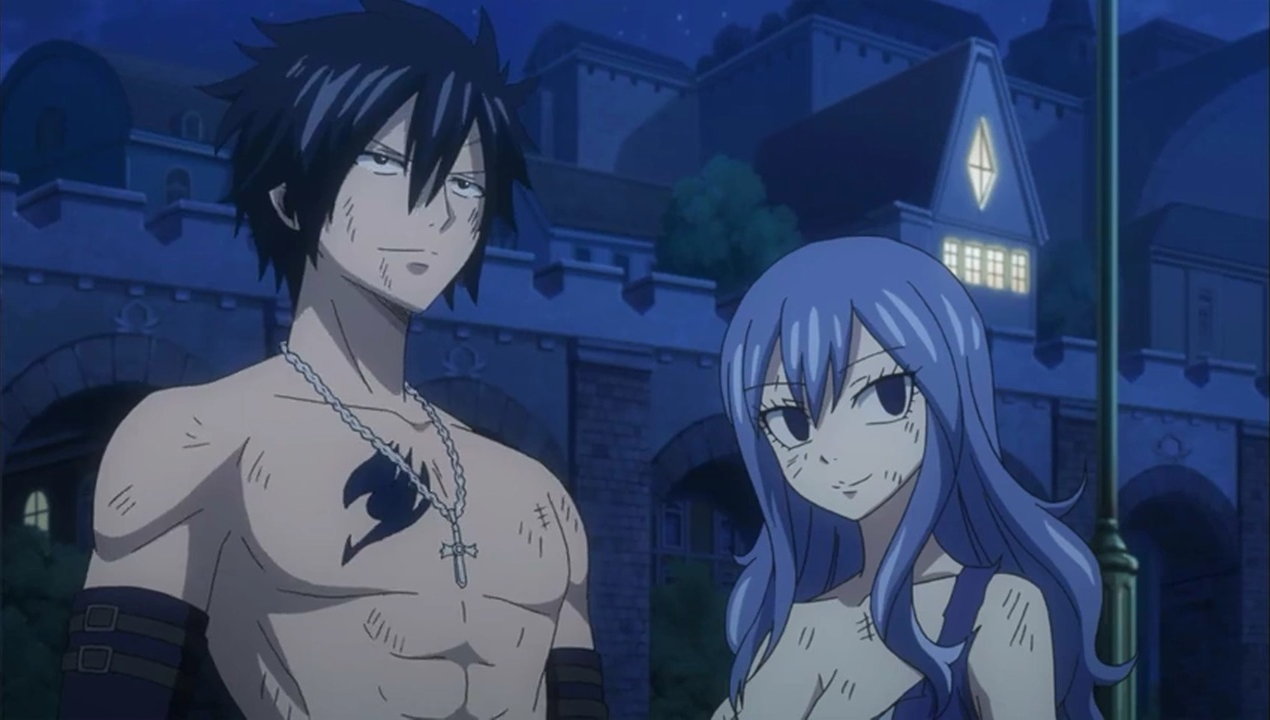 One of the more apparent and closely debated pairs in the series, many fans believe that Gray and Juvia are a pair that's likely to head into a relationship. The war between Phantom Lord and Fairy Tail would be the pair's first meeting and would also lead to Juvia's interest in Gray (something that would be borderline stalker). It is obvious that Juvia is in love with Gray but it is Gray's side that can be ambiguous most of the time. Gray often ignores or avoids Juvia's attempts at him, but at the same time he also shows kindness and a deep care for Juvia (especially because she became a comrade). Erza is probably the one that pushes them towards each other and is the one to acknowledge how Juvia's strength also comes from her feelings of love towards Gray.

Their fates and stories seem to be entwined though, with Gray continuing to learn about Juvia and fighting her battles. The same can be said about Juvia as well. Many believe that it is likely that Gray has feelings for Juvia but acts more like a tsundere. One thing is for certain, they are growing closer with each day and each mission. 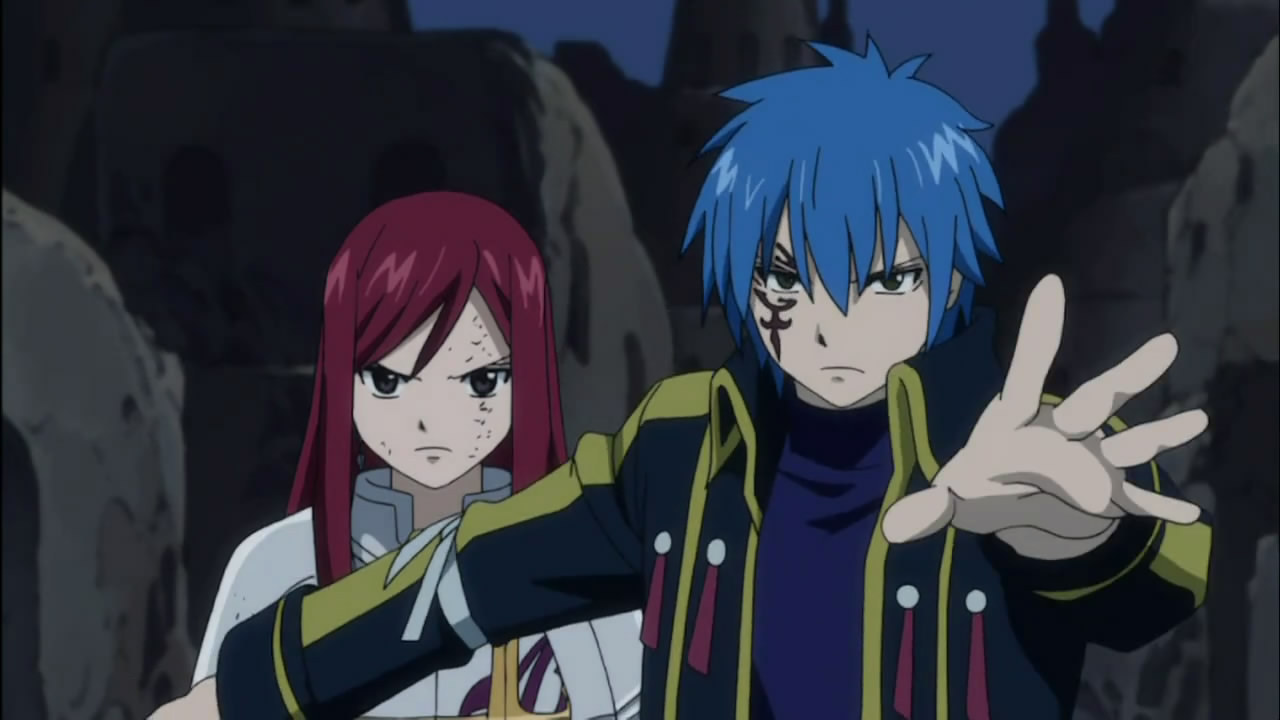 The tough and courageous Erza rarely shows a softer side to her, but that side seems to be highly prominent when it comes to matters concerning Jellal. They've known each other since their childhood days at the Tower of Heaven, and it is Jellal who was the reason for Erza's survival. With that she personally puts Jellal in a special place whether it is unknowingly or not. Jellal also seems to care much for Erza but he is consumed by his desire to redeem himself for the wrong he has done. In terms of attitude, Erza seems to treat Jellal a different way compared to others as she shows him a softer and kinder side, and the same goes for Jellal as well.

Erza is very forgiving of Jellal despite his past and Jellal is also highly protective of Erza. There was even an episode where Erza was going to confess her feelings to Jellal but they were interrupted by Ichiya. With Erza's commitments within Fairy Tail and Jellal's quest to vanquish darkness in the world, we may not yet know the resolution on their feelings towards one another. 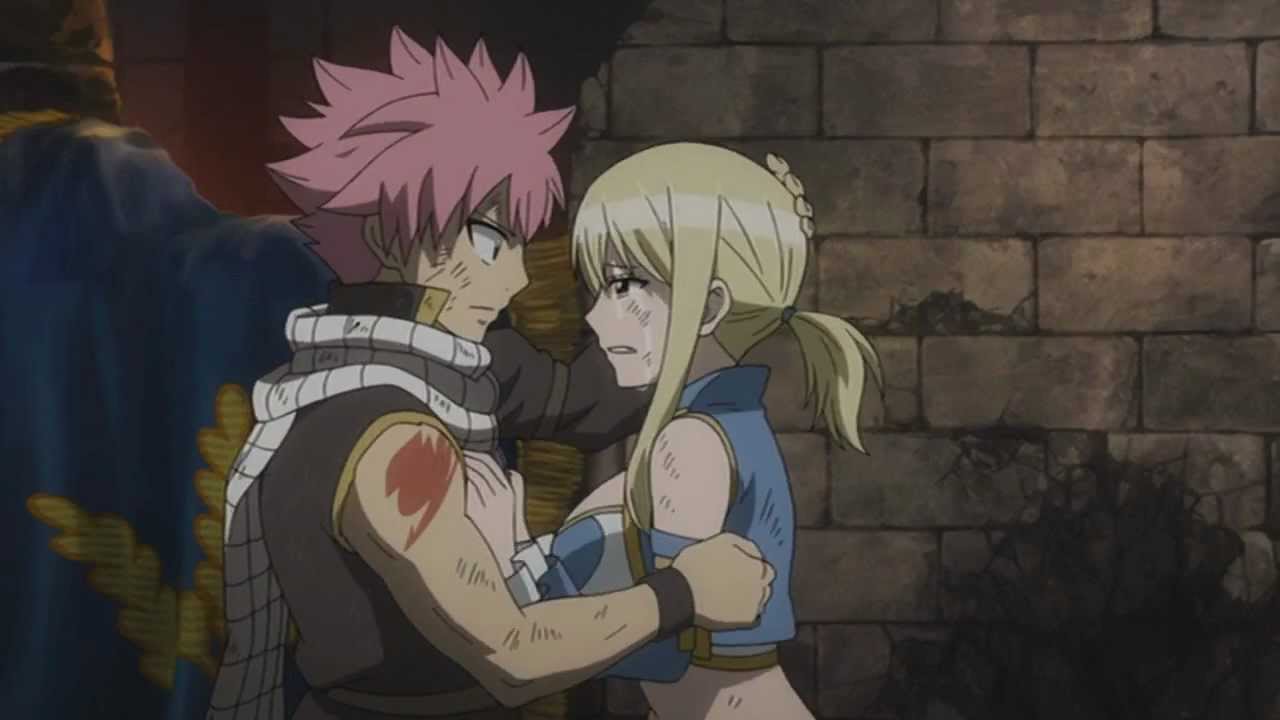 This is another pairing that is up for debate especially with the past between Natsu and Lisanna. Natsu and Lucy share a very close relationship and are even on the same team together in the guild. One of the reasons for this is because Natsu is the one who invited Lucy to join Fairy Tail. In some comical scenes, you'll find that Natsu and Happy often frequent and crash at Lucy's home. Lucy trusts Natsu implicitly and knows that he would try his best to protect her and the guild. Natsu is also highly protective of Lucy and is ready to sacrifice his life for her if needed.

Though there haven't been any significant romantic events that would stir the two up, they are often teased by guild members, celestial spirits and even enemies as being a couple. They both deny it vigorously. We'll find out soon enough if this is only a friendship or not.

You may have a couple in mind that wasn't mentioned here. For those eagerly awaiting for the flowers to bloom it may be a while before we see more developments from these characters. The thrill lies in not knowing and just joining them as they go through their journey. How attached we are to these characters just goes to show how appealing these characters are and how good the character development is in Fairy Tail.