In this episode of Noragami Aragoto, evil rears its ugly head when it causes trouble between two individuals that has forged a strong relationship. Yato also blushes in front of someone while Yukine resumes his role from the first season. 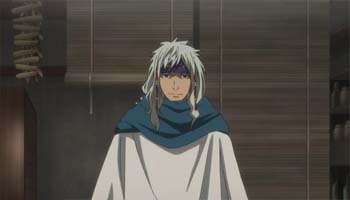 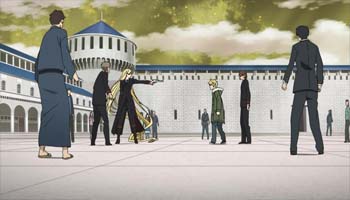 The second season of Noragami is really focusing on intensifying the story, and it's surprising because the first season is character driven. It thrived on character development and their relationships, but Noragami Aragoto is really going forward with a more straightforward shounen story. In this episode, Kugaha is at it again, as the show reveals more components of his evil plan. He drives a wedge between Bishamon and her right hand man, Kazuma, using the death of Suzuha. It's amazing how the show still draws strength from a dead character, since he is plot device at best, but Suzuha's death raises some concerns for Kazuma. Upon learning of Suzuha's death, Kazuma immediately decides to investigate the matter. He always acted as the leader and big brother of Bishamon's large Shinki family, so he wanted to know how Suzuha died. While he was away though, Kaguha takes the opportunity to sully his name. Kaguha breaks the news to Bishamon that Kazuma is friendly with Yato. Bishamon absolutely hates Yato, so finding out her most trusted Shinki is close with him effectively drives a wedge between her and Kazuma. Kaguha played everyone perfectly, as he preys on tpeople's weaknesses and uses it to put a strain on their relationships. 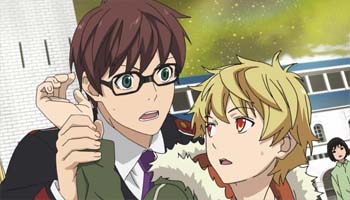 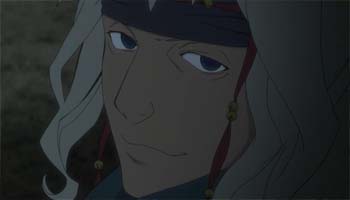 Kaguha's plan is too perfect though, because Suzuha's death greatly affected another Shinki: Yukine. Yukine's unstable emotions causes trouble for everyone, and it somehow helps Kaguha's plan. Distraught over his friend's death, Yukine demands some answers from Kazuma, but he is suddenly transported into Bishamon's manor. Kazuma inadvertently sent Yato's only Shinki into Bishamon's lair. Seeing that, Bishamon suddenly has no doubt that Kazuma is indeed an ally of Yato. Yukine's emotional speech, about Bishamon not caring about Suzuha's death in front of her large Shinki family, has caused some trouble as well. The look on Kaguha's face easily tells you how all his scheming is finally showing results. In the heat of the moment, Bishamon suddenly exiles Kazuma and then Kaguha takes advantage of the opportunity by usurping Kazuma's role as the leader and big brother of Bishamon's Shinki family. Kaguha now has the trust of Bishamon and everyone else, and it looks like he's about to move into the final phase of his plans. 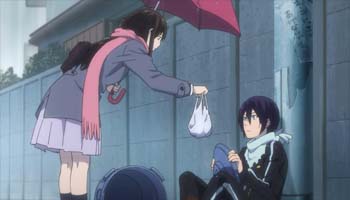 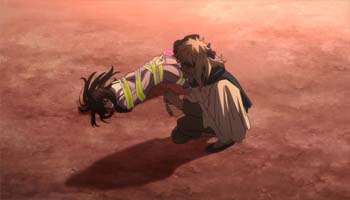 In this episode, the show also explores Yato and Hiyori's relationship. Yato seems overly concerned about Hiyori that he would watch over her, and he also stays in one place so Hiyori can visit him every day. Yato seems to value his relationship with Hiyori, but this also serves as a weakness for him. Kaguha's specialty is striking at a person's precise weakness so he uses Yato's to create some chaos. It seems the events of the first season, where Nora takes Hiyori's memory to bring out the "god of calamity" in Yato, is about to happen again. This episode ends with Hiyori being kidnapped by Kaguha, but also revealing that he played a part in taking Hiyori's memory in the first season. Kaguha surprises us some more by revealing that his alliance with Nora isn't just for his own personal gain. It seems that he shares the same fate as Nora, and their plan is bigger than just a petty attempt to shame Kazuma or mess with Yato. It's a lot more sinister than originally expected. 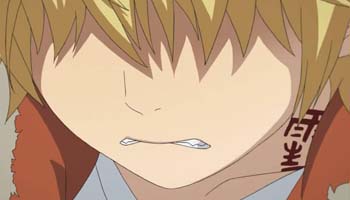 Suzuha deserves a mention here. His death really shook the anime, since it's the first notable death that occurred in the series. To think that one minor character's death causes problems is a pretty beautiful approach by the narrative. It still draws strength from the character driven style that makes Noragami great, but it now serves a more straightforward story in the second season. Yukine's emotional outburst doesn't end here. The episode ends with him crying in his room, and Suzuha's death is really just the start of this boy's spiral into recreating the events of the first season. His shaky emotions almost got him and Yato killed, and it's not surprising if it happens again for this season. He lost his first and only friend, so it's really tough for him. While he might actually grow from this experience, he might also spend majority of the series just sulking and causing problem for others. 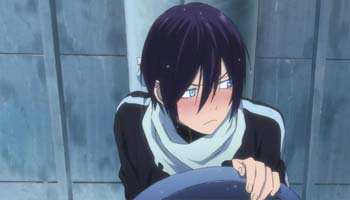 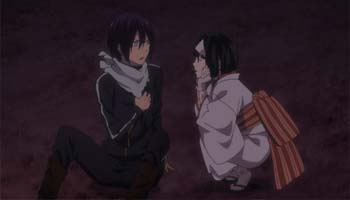 Yato has an interesting line after Hiyori swears she'll never forget him. He said "I hope that lie isn't a lie" and it seems odd for Yato to speak in a cryptic way. Hiyori might lose her memories again, or she might actually die this time but she'll get reborn somehow. Since Nora wants the chaotic killer side of Yato to come back, Hiyori's death might actually trigger it.

Kazuma also drops an interesting line of his own when he reasons that Yato is actually a savior instead of a murderer, as Bishamon claims. The events leading to her hating Yato with all her guts seems to be witnessed by just two people: Kazuma and herself. It looks like Yato killing Bishamon's Shinki from way back is actually a good thing. It might be because Bishamon can't release a Shinki from their name, which sets them free and alone to fend for themselves, so Yato played the role of the bad guy and released them himself. Bishamon's Shinki are miserable and she can't really see it herself, so Yato's act might've saved her in a way she can never understand.

Nora and Kaguha might both be stray, and they serve a god similar to Rabo from the first season. The master they are serving might be a lot more evil than Rabo though.