Recently, My Sister Is Unusual: An Introduction to Incest

High school girl Mitsuki Kanzaki's mother has remarried, and now Mitsuki has a new big brother. But a mysterious ghost girl has plans for these new siblings...and they involve romance! Find out if Recently, My Sister Is Unusual (Saikin, Imouto no Yousu ga Chotto Okashiinda ga) is for you! 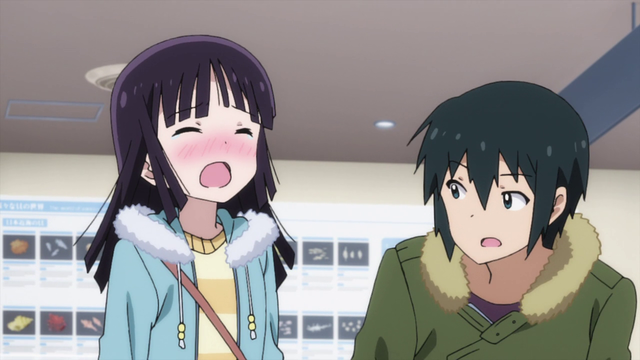 The Kanzaki siblings—15-year-old Mitsuki and her older stepbrother Yuuya—are at a tough time in their lives. Their parents have recently remarried and left on a business trip/honeymoon, leaving their stepchildren home alone to get used to each other. The family drama takes a turn for the supernatural when Mitsuki encounters the ghost of a girl who was in love with Yuuya and cannot move on until she confesses. How do you get romance out of divorce and death? Improbably, winter 2014's Recently, My Sister Is Unusual (Saikin, Imouto no Yousu ga Chotto Okashiinda ga) has an answer to this question—and even more improbably, that answer is incest! The ghost girl decides to possess Mitsuki to carry out her amorous designs on Yuuya, but will it throw a wrench into their sibling relationship...or bring them closer together? 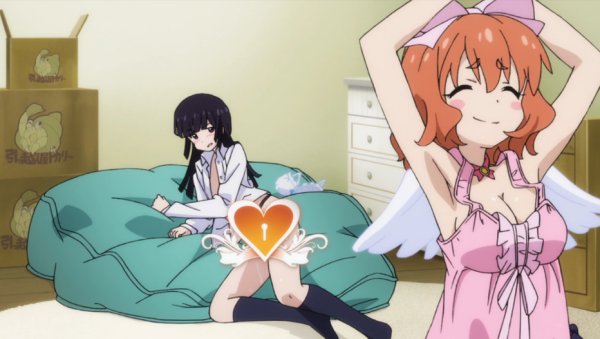 Mari Matsuzawa's Recently, My Sister Is Unusual debuted in Monthly Dragon Age magazine in November 2010, and it continues to this day. The anime began in early January 2014 and ran through March for 12 episodes, followed by an OVA episode that June. A light novel series written by Kougetsu Mikazuki and illustrated by Matsuzawa began two weeks after the anime, published by Fujimi Fantasia Bunko. A live-action film was released in May 2014, starring relative newcomer Tenka Hashimoto (Install, Aruhi Ahiru Bus) as Mitsuki. Though the show doesn't qualify as hentai, it has come under fire for obscenity by Japan's Broadcasting Ethics and Program Improvement Organization, which forced the show to a 1:30-2:00 AM time slot.

Recently, My Sister Is Unusual is innocuous enough to start, offering a snapshot of the Kanzaki family at dinner: a recently married middle-aged couple and the children they each bring to the family. Though Yuuya and his father and stepmother are eager to start their lives together, Yuuya's little stepsister Mitsuki isn't nearly as excited. She refuses to address Yuuya as "onii-chan" (big brother), and is largely cold toward her family. This doesn't stop Yuuya from trying to be a good brother, and when Mitsuki collapses on their way home from school he rushes her to the hospital without delay.

Here's where it gets weird. Mitsuki's perfectly healthy, but she's been possessed by a ghost girl her age, Hiyori Kotobuki. All Hiyori remembers from her life is that she was in love with Yuuya, and her unrequited affection keeps her from moving on to her final reward. She takes over Mitsuki's body in order to fix this. Here's where it gets weirder: as part of the deal, Mitsuki is locked in a chastity belt that charges up when she's in romantic situations with her stepbrother. When it fills up, Hiyori can go to the afterlife...but should Mitsuki let jealousy or sadness drain the belt, she and Hiyori will be cast into Hell.

Sound like a visual novel? It's supposed to—several scenes throughout the anime cut away to show dating-sim-esque text, describing the "action" while a heart-shaped meter slowly fills up. It's part of the show's perverted charm, which blends fetish and family to tell a surprisingly heartwarming story of step-siblings accepting each other as brother and sister. There's a simple formula to the show: Hiyori interferes with the often reclusive Mitsuki, hijacking her body in attempts to romance a clueless Yuuya. Though most of the episodes are self-contained, the common thread is that Mitsuki must wrestle with new feelings for her stepbrother: how much of them are Hiyori's and how much are hers?

That's not to say that the show is all prurient fantasy. Mitsuki's aloofness stems from a difficult childhood plagued by abusive father figures, and she distrusts the men that her mother brings into their life. Despite their caring nature, Yuuya and his father are no exception. When Hiyori isn't getting Mitsuki into compromising situations, the focus shifts to the step-siblings' rocky relationship and Mitsuki's attempts to adapt. Though Mitsuki is a quiet and independent girl, she recognizes that Yuuya only wants to look out for her, even if she isn't ready to reciprocate his affection. It isn't easy, but their relationship gradually becomes deeper and sweeter as Yuuya and Mitsuki let each other into their lives—whether it's cooking for each other, visiting the aquarium, or helping with homework.

Recently, My Sister Is Unusual draws its drama from the same place it draws its humor: Mitsuki's uncertain dynamic with Yuuya. She finds herself opening up to him due to his kindness, but can just as quickly push him away—often to overcompensate for Hiyori's aggressive flirting after she regains control of her body. In that sense the show is an ecchi comedy like any other: Yuuya accidentally gropes Mitsuki in his sleep, Mitsuki's best friend Ayaka tries to get her to embrace her wild side, and Yuuya's perverted best friend Shoutarou wishes he had a little sister as cute as her. But it's an ecchi comedy with a soul—one that isn't afraid to break taboos to build a family.

If Recently, My Sister Is Unusual isn't enough to satisfy your deviant tastes, you might try one of these shows. Though they don't have quite the supernatural streak that this one does, the following anime all deal with forbidden romance in one way or another—whether it's teacher/student marriage, a drunken betrothal, or just awkward virginity.

1. My Wife Is A High School Girl (Okusama wa Joshikousei) 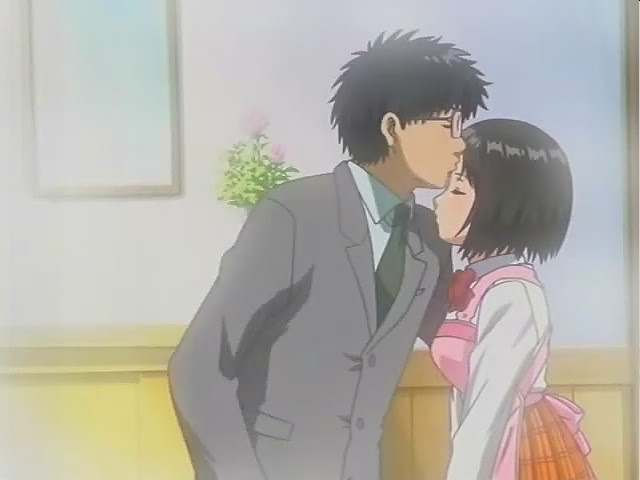 17-year-old Asami Onohara is an average high school student with an unusual secret: she is secretly married to her 25-year-old biology teacher, Kyosuke Ichimaru. It's not an easy relationship—they have to live together without anyone finding out, and they're under contract not to have sex until Asami is 18, lest they face her father's wrath. In many ways, Asami is every bit a traditional Japanese housewife; she's always ready with dinner and cares deeply for her husband. But she's also insecure and frustrated with their relationship at times, wanting to take it further and frequently worrying if she's good enough for Kyosuke. But she's got nothing to worry about: though Kyosuke is beset on all sides by older women who are attracted to him, nothing can change how he feels about Asami. It's no incest comedy, but if you're in the mood for something short, sweet, and a little smutty, this one's for you.

Oh, and just like Recently, My Sister Is Unusual, it ends with a Christmas episode. Make of that what you will.

2. My Wife Is the Student Council President (Okusama ga Seitokaichou!) 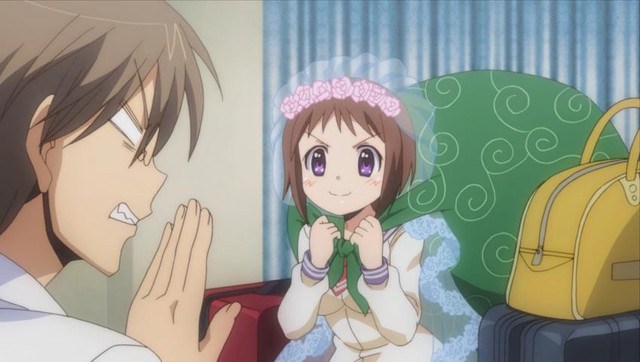 Speaking of short and sweet, this show is a series of twelve 8-minute shorts, so you can knock it out in about a third of the time it takes to watch Recently, My Sister Is Unusual. Star student Izumi Hayato runs for student council president, only to lose to the goofy Wakana Ui and her platform of "liberalization of love". This involves raining condoms on a school assembly. Still stinging from the loss, Izumi finds out that night that Wakana has moved in with him, due to a promise their parents made that the two would one day marry. Izumi and Wakana must keep their relationship secret, especially in light of a conservative backlash to Wakana's views on sexuality. If you're sick of dense protagonists who couldn't recognize a sexual advance alone with a girl in a mixed onsen, worry not—this show's main couple actually does get some action. It's just one refreshing part of a story of two lovers coming to terms with a marriage they never asked for. 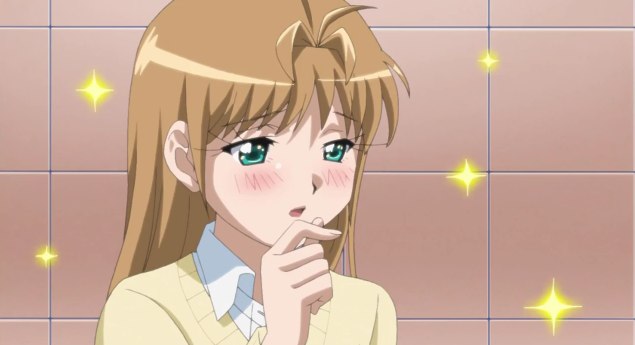 Okay, enough with the wives. The full title of this anime is Yamada's First Time: B Gata H Kei. If that doesn't tell you everything you need to know, it's worth noting that B Gata H Kei roughly translates to "B-cup slut". Yamada (no last name given) is a high school girl with a mission: to sleep with one hundred guys before she graduates. Of course, she has to lose her virginity first, and she's far too awkward and insecure to make a move with an eligible boy. Don't be turned off by the synopsis—not unlike American Pie, B Gata H Kei is a smart, colorful coming-of-age comedy about learning to be comfortable in your own skin and not put sex on a pedestal. Shimoneta may be over, but fans of that show will find a lot of Hyouka Fuwa's scientific curiosity in Yamada's antics, which include highlighting all the dirty words in the dictionary.

The first season ended in March 2014, and the OVA capping it off aired in June of that year. Without spoiling anything, the show ends on one of the biggest sequel hooks you'll see. With the dating sim feel to Recently, My Sister Is Unusual, you can think of it as a "new game plus." Though Mitsuki comes a long way to accepting her new family, there's still much more to work out in terms of how she truly feels about her brother. The manga is ongoing—perhaps it will answer questions the anime was content to simply ask.

Kiss X Sis isn't your typical harem anime. The show does a great job at poking fun and using tropes that can be seen as taboo themes in real life. Here are 20 quotes that are sure to grab your... attention!