This is first episode recap of Akagami no Shirayukihime. The fairy tale story is about a girl meeting a prince, and they slowly start to fall for each other, until of course an unexpected event happens that puts their relationship in jeopardy. 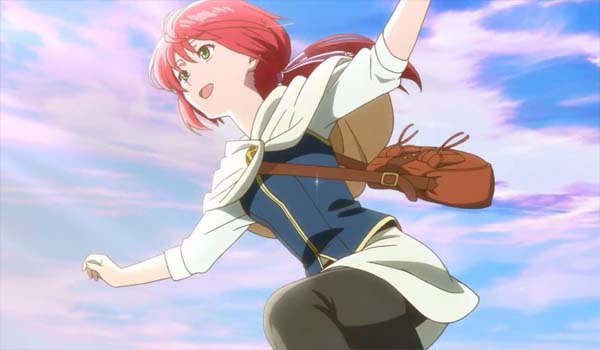 Akagami no Shirayukihime is a pretty straight forward, easy to watch anime. The first episode basically establishes the status quo for the show. It also introduces us to the various personalities that play an important role in this Shoujo anime. We are first introduced to Shirayuki. She is a herbalist that runs a modest operation in the country of Tanbarun. She is a free spirit that doesn’t play by other people’s rules. This is evident when she decided to run away upon learning the first prince of the country wants her as a concubine. His sole reason for wanting her is because of her unusual red hair. Shirayuki doesn’t want to be a concubine, as she feels that it is equal to being bought like an apple at the market. She decides to leave town, but not before cutting off her long red hair. The prince wants her for her hair so she graciously left it for him to admire. Shirayuki isn’t just a free spirit though. She also holds her duties above all else. Before leaving her life in Tanbarun behind, she spends the night making medicine for her customers. She didn’t worry about herself, but instead about those who are relying on her.

Once her duties are fulfilled she hitches a ride leaving the country and never looks back. 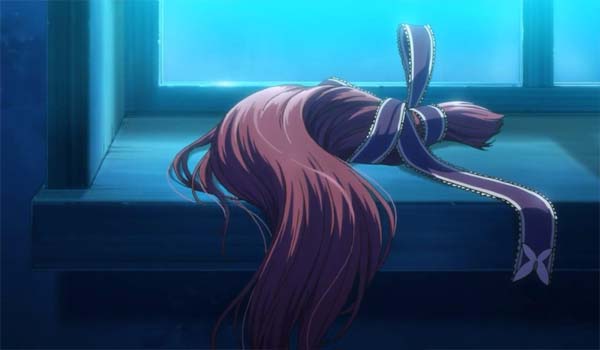 She stops at a house in the forest. It’s empty but she doesn't want to intrude, so instead she sleeps on the grass outside waiting for morning to come. People eventually come by the house, and Shirayuki meets three people that occupy the house from time to time. Shirayuki’s bold attitude caught the attention of one of them, Zen. Zen has a rather abrupt personality as well and they did clash in their first meeting. They seem to have reached a mutual understanding the more they talk, and Zen finds Shirayuki interesting as she begins to confide in him. 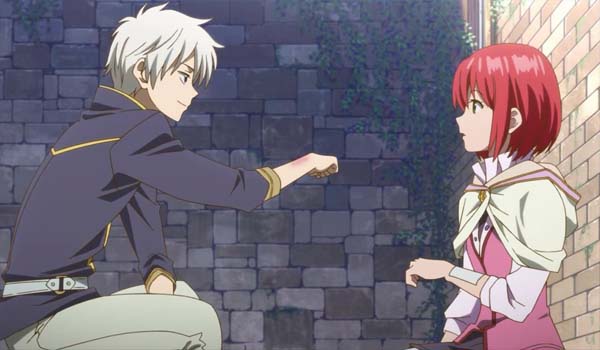 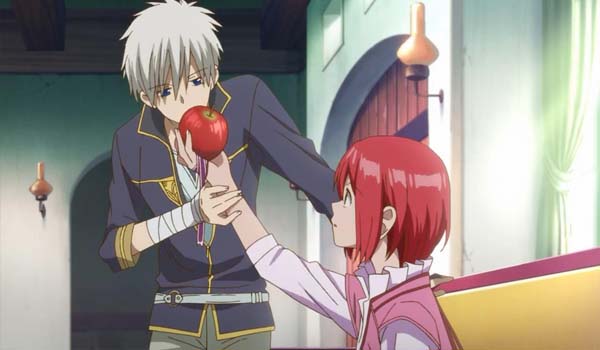 Before they can get closer though, a basket of apples is left at the house. It had Shirayuki’s ribbon that she left at Tanbarun with the hair she cut of- Prince Raji has found her. Zen assures her that it was fate that led them to meet each other, and is adamant that Shirayuki shouldn’t accept being Prince Raji’s concubine at any cost. Zen then takes a bite of the apple that, shockingly, has poison in it. It was intended for Shirayuki, but in a sick twist of fate Raji now has leverage to offer the girl. Shirayuki must become his concubine for the antidote, or Zen will die.

Shirayuki clenches her fists and her strong, free spirited attitude comes out before she says “Take me as you wish” conceding defeat. Just as she mumbles these words, Zen barges in completely healthy. We learn that he has been training his body to be immune to poison, so he is able to stop Shirayuki before she says or does anything else. This is when we discover that Zen is also a prince. He’s the second prince of Clarines, Tanbarun’s neighboring country. He then threatens Raji that poisoning him is a punishable act, and Raji has no choice but to let Shirayuki go to avoid trouble with the country of Clarines. Zen and Shirayuki then have a proper introduction to each other. The anime ends with Shirayuki taking Zen’s hand with both of them smiling as they gaze at each other. 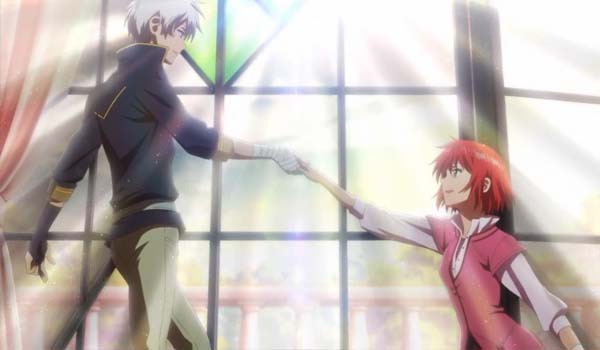 Shirayuki and Zen’s exchanges are really fun to watch. This is the first episode so nothing big happens yet. They have an adorable chemistry though since the show draws its beauty from fairy tale clichés. The poisoned apple is the dead giveaway. The free spirited girl falling for the dashing prince has a lot of ways to make you tremble in excitement. So far, it’s all dialogue scenes but a handsome guy saying that he’s fated to meet a girl sets up a lot of wonderful things to come. 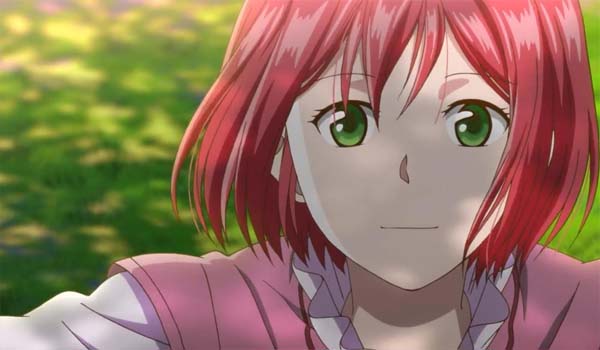 This show reeks of Shoujo manga. The one thing Fruits Basket does a lot is showcasing close ups of the character’s face. It's a way to convey more feelings and enhance the story with very little work. The typical wide eyed expression coming from Shirayuki’s innocent face is a staple of Shoujo. It’s an effective way to connect with the character and also tell a different story when the audience realizes that Zen is also staring at this wide eyed innocent face. Fruits Basket did a lot of close ups of Tohru’s face as well. It undoubtedly elevated the romance and made Tohru such an engaging character. The short moments of Shirayuki and Zen talking is also enhanced by the same technique. It’s like a subliminal thing and it’s a wonderful part of any Shoujo. 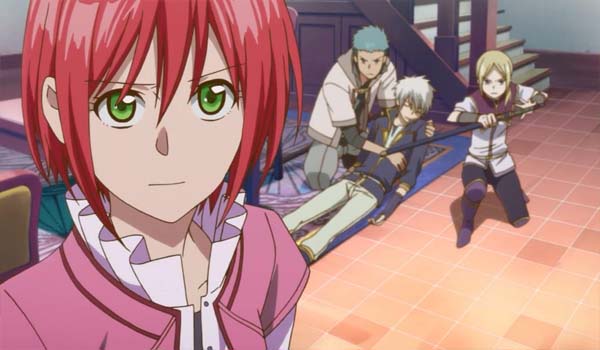 Naturally, Zen and Shirayuki will slowly fall in love with each other but a lot of characters will also intrude in it. It’s a pretty straight forward story for now, however we can expect Zen’s royal status to hinder their blossoming love. With Shirayuki’s free spirited attitude, you can also expect them to argue a lot.

Shirayuki’s past will play a huge part in the story. Her red hair doesn’t feel like novelty alone. She might be of royalty as well and her country might want her back when they find her. It’s yet another thing that’ll hinder Shirayuki and Zen’s romance.

If the show is really following fairy tale clichés, then expect a dragon to appear sometime in the future and maybe a couple of evil step sisters as well.