Little Witch Academia: Studio Trigger Puts a Spell on You

It's hard being the only mortal in a school full of witches, but perhaps young Akko can discover some magic of her very own within herself. As short as it is adorable, Little Witch Academia just might be Studio Trigger's next big hit. Read on to find out how it all started—and how it might continue.

When they're not making shows about superpowered sailor uniforms or ninja salarymen, Studio Trigger release short-and-sweet stories like Little Witch Academia. Imagine if Hogwarts was populated exclusively by magical girls, and you won't be far off the mark. It bears the distinctive hallmarks of a Trigger product: fluid, lively animation and an exaggerated art style to match the characters' formidable personalities. Little Witch Academia is a short film rather than a full series, but plays out like a pilot: self-contained, yet full of questions begging to be answered and hinting at a world waiting to be explored. Like Kiki's Delivery Service on a sugar rush, this is definitely worth keeping an eye on. 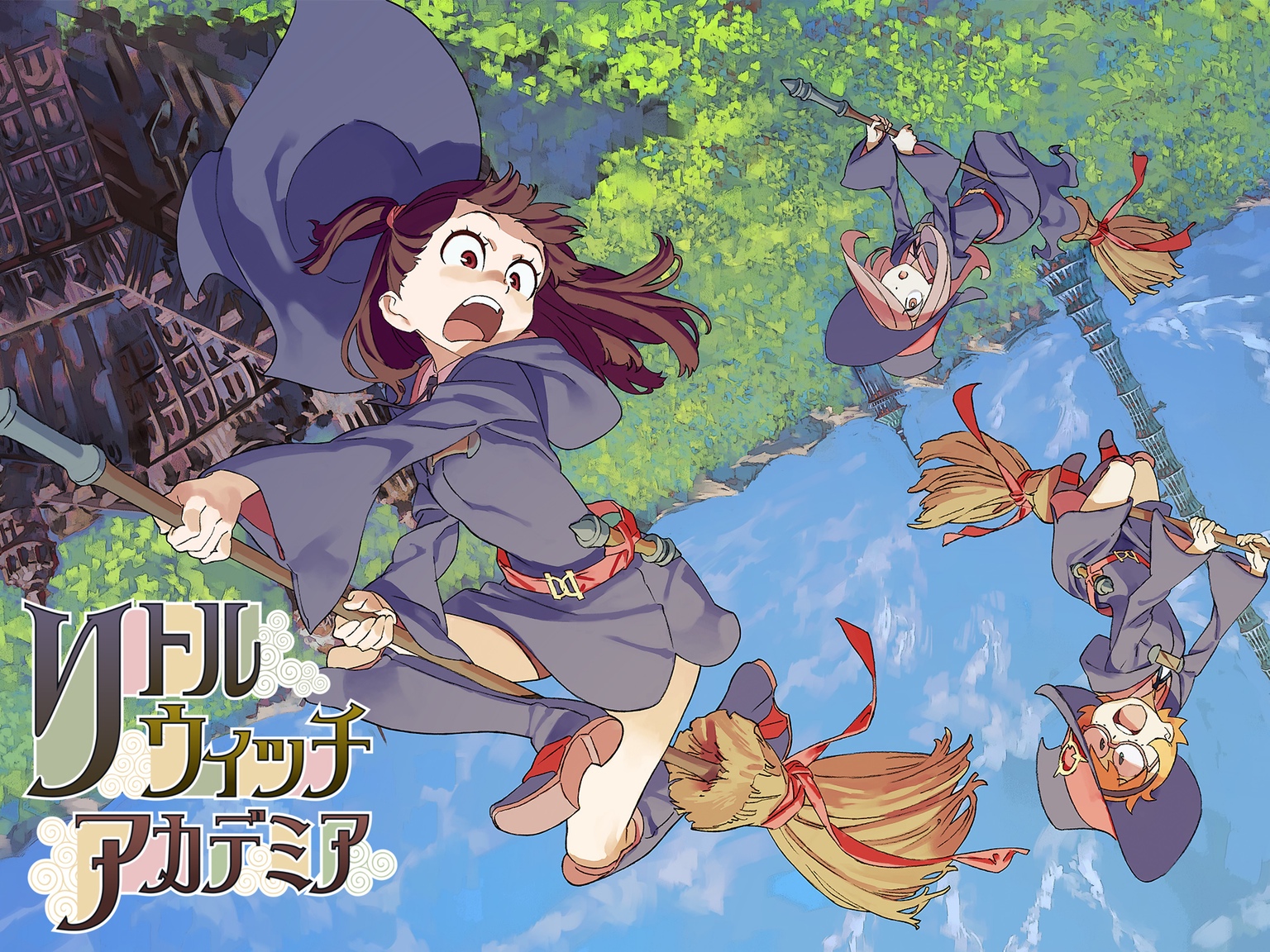 Little Witch Academia is Studio Trigger's offering to 2013's Young Animator Training Project. Funded by the Japanese government through the Agency for Cultural Affairs, this project pairs animators-in-training with anime studios to produce short films for the annual Anime Mirai festival. Directed by Yoh Yoshinari and written by Masahiko Otsuka, the roughly 20-minute short was released in theaters in March of 2013. It was available on YouTube from April through August of that year, during which time it racked up over 850,000 views. During that time a second 20-minute episode was announced, and a Kickstarter campaign to double its length reached its $150,000 goal in five hours. That short, subtitled Enchanted Parade, premiered for Kickstarter backers in early July, with a theatrical release planned for October. Two manga series—one based on the first episode, one original story—are currently running in Ultra Jump and Ribon. 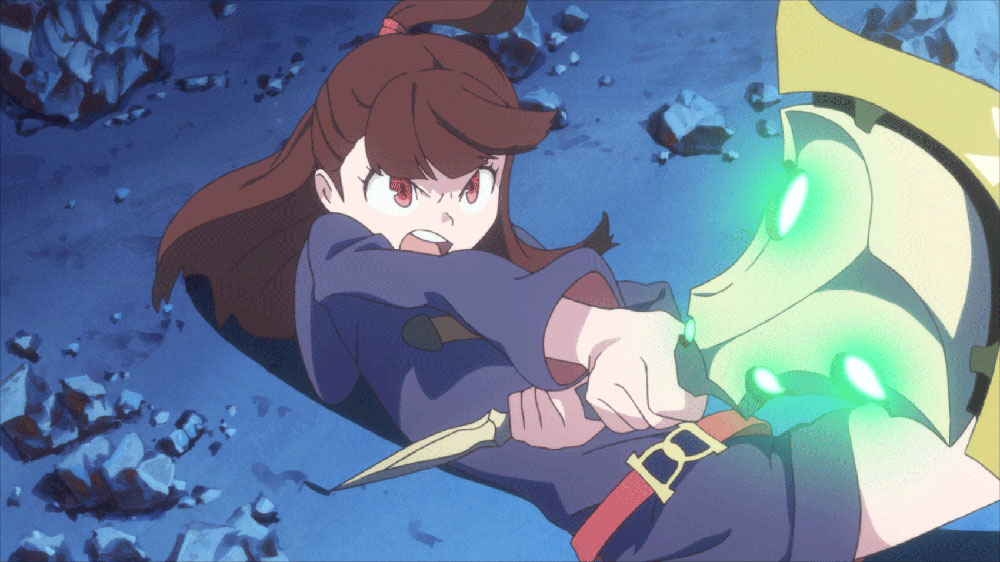 Studio Trigger is excellent at establishing a setting. Whether they're introducing a fascist high school or a crime-ridden city, their fast-paced openings make the tone and the major players immediately apparent. In the case of Little Witch Academia, a magic show attended by young protagonist Akko Kagari pulls us directly into a colorful world of wonder and beauty, where you can take down even the mightiest enemies just by believing in yourself. In the words of Akko's childhood hero Shiny Chariot: "Never forget...believing is magic!"

Fast forward a few years, and Akko now attends Luna Nova Magical Academy in western England. Like all good things in life, it turns out magic is less wish fulfillment and more effort and study. Akko's a bit of an outsider here; she's from a non-magical family and therefore doesn't have an affinity for the art. What's more, the magical community largely considers Shiny Chariot a charlatan and a sellout for wasting her gift on fireworks shows for mortals. Within the first three minutes, it's clear that this is a story about growing up and realizing that the world can be tougher to live in than you'd like. How does one reconcile youthful idealism with reality?

For what's essentially a pilot, this short is packed with personality and detail. Trigger lays the foundation for several relationships and dynamics—Akko and her two best friends Samantha and Lotte, arrogant star student Diana and her minions—as well as teasing plot points for a potential series. Without spoiling anything, I advise you to take a close look at what the characters react to and how, because there's a lot more to the archetypal student cast than meets the eye. Indeed, there's more than a few moments that will surprise viewers; from the gruesome defeat of a minotaur during a student field test to a refreshingly reasonable rival in Diana, this show confines itself neither to stock characters nor to a completely cutesy aesthetic. Mixing boarding school uniforms and witches' robes Harry Potter-style, Trigger's animators blend a startling palette of influences into a coherent whole.

Repeated viewings reveal a startling amount of detail and foreshadowing, and yet still leave one feeling they've only caught a glimpse of Luna Nova and its surroundings. The rules of magic are particularly intriguing; although we are only exposed to one of Akko's classes early on, we learn that a witch's magic only functions near a viable power source—the Sorcerer's Stone powering the school, for example. One wonders about the ins and outs of travel for witches, as well as their history with mortal communities; though the magic show suggests amicable relations, Enchanted Parade alludes to the Salem witch trials. Things have come a long way in 400 years, but how far do they still have to go?

Although Akko's perseverance saves her in the end, every character has a part to play in the finale, and it's clear that there's more than one right way to succeed in the world of magic. Is courage all you need? Natural talent? What about potions and modern technology? With all the unanswered questions about Akko's world, this first outing sets up a strong undercurrent of learning and cooperation on the way to solving them. Though short, Little Witch Academia shows immense promise and has already built an impressive and dedicated following. If Studio Trigger decide to pursue a full-length series, they're sure to have real magic on their hands. 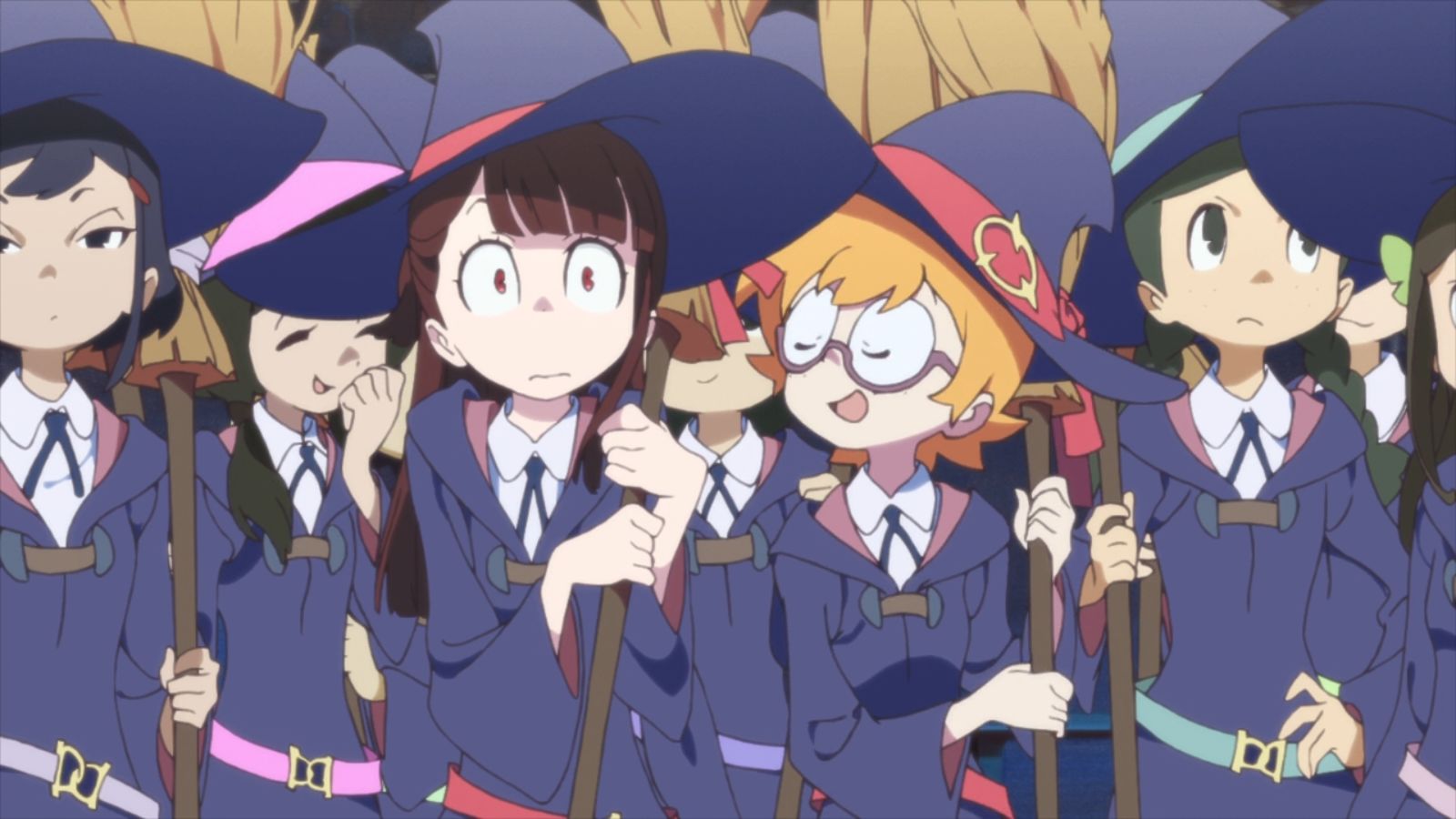 All three of these feature protagonists caught somewhere between adolescence and adulthood, with a heavy dose of magic to complicate matters. One way or another, they all discover that while talent and experience go a long way, it's just as important to have courage and determination, if not more so. 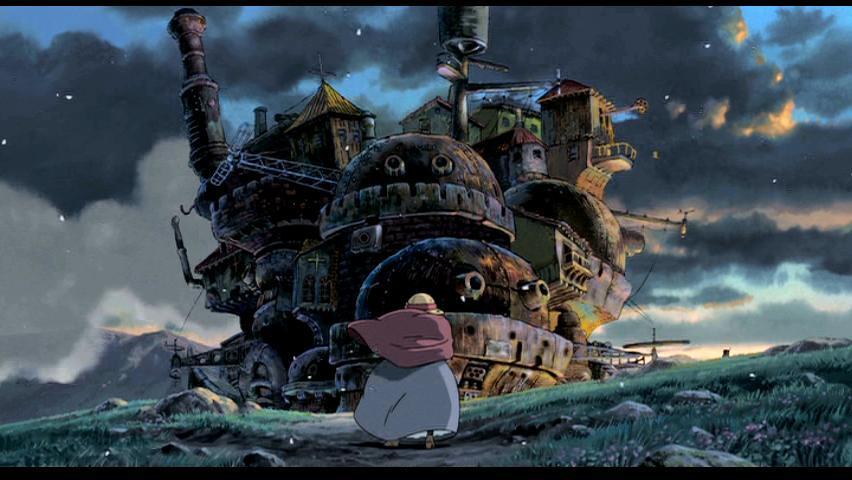 Based on a relatively bland novel by Diana Wynne Jones, Howl's Moving Castle is one of Studio Ghibli's most enduring classics. While not quite as stubborn as Akko, Sophie's headstrong enough to muscle her way into the heart of the land's most powerful wizard—and does it while transformed into a woman five times her age! The film's sweeping plains and rolling hills look just like the countryside surrounding Luna Nova, and every inch of this world is alive with brightly animated magic; the style looks more mature, but it fits the age of the protagonist and the pacifist theme. Though not paced quite as smoothly as its shorter counterpart, with a notable slowdown in the final third of the movie, Howl's Moving Castle should satisfy anyone left wanting more by the short runtime of Little Witch Academia.

Also, Christian Bale voices the wizard Howl in the English dub. Who wouldn't give up her youth for him? 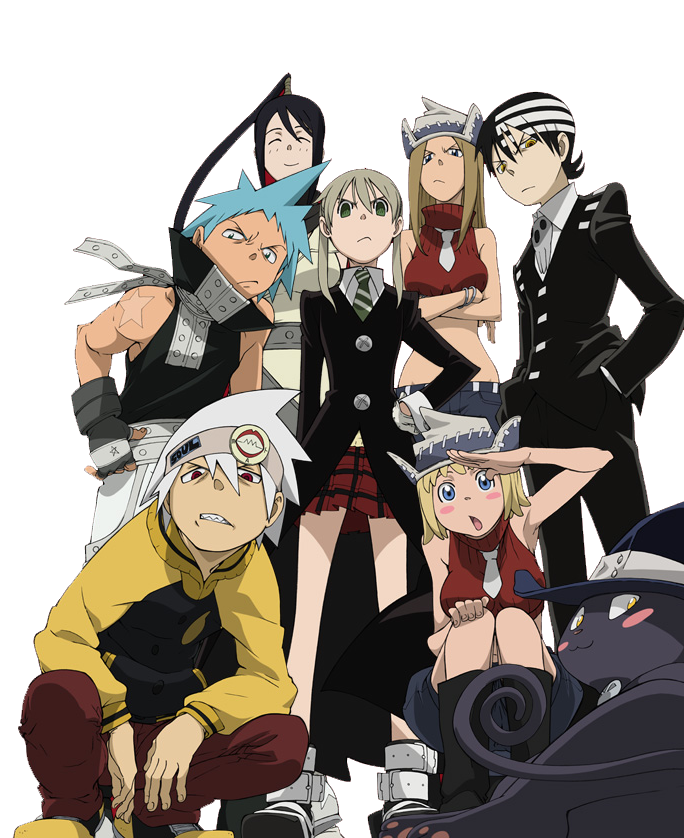 Little Witch Academia isn't silly enough for you? Give Atsushi Ōkubo's Soul Eater a shot. This one's also set at a magical school, but unlike Luna Nova, Death Weapon Meister Academy trains warriors and their sentient weapons to hunt witches. If there's one weakness to Little Witch Academia, it's that most of its otherwise charming characters don't have time to show themselves off. As a full-length show, Soul Eater doesn't have this problem, but its cast is also loud, crazy and bursting with personality, true to its over-the-top style. The characters and their weapons burn with ambition to rival Akko's, particularly the insanely arrogant Black Star. The ending is one of the most divisive in anime, but if you liked seeing Akko succeed you might give this one a pass.

Of course, it's worth watching for Excalibur alone. Go look him up, you'll thank me. 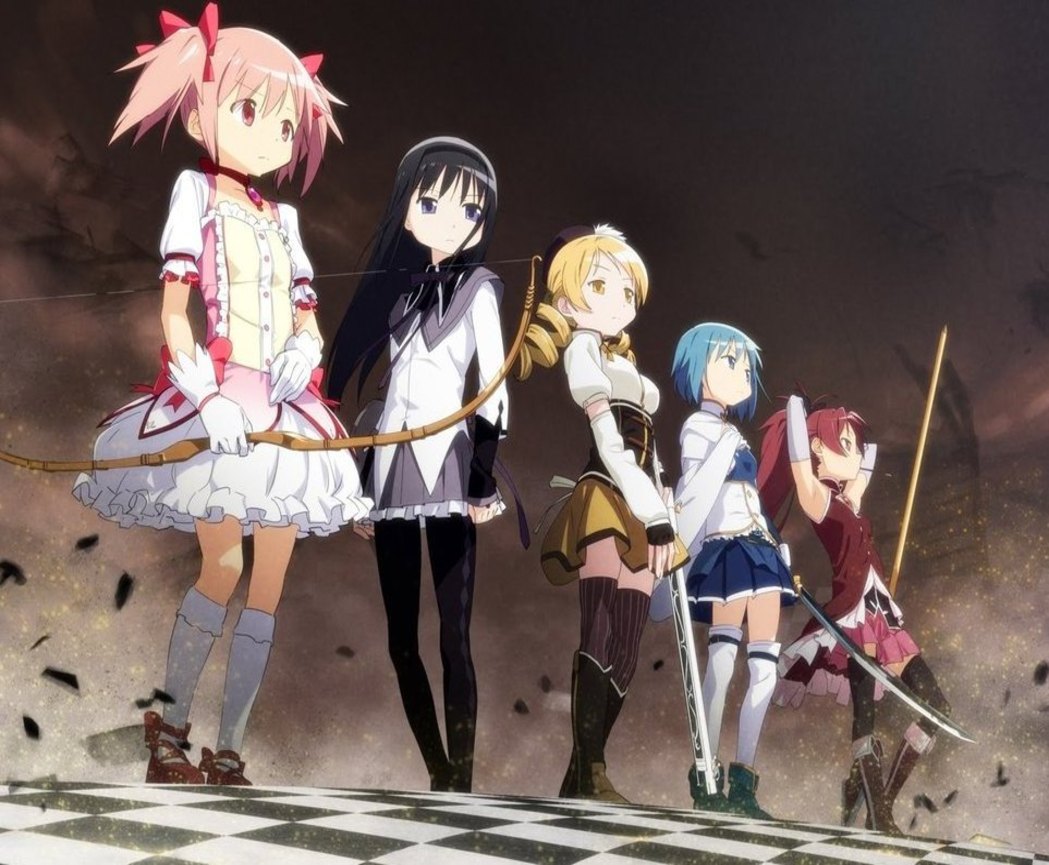 So similar, and yet so different. Puella Magi Madoka Magica became an instant classic for its deconstruction of the magical girl genre, and like Little Witch Academia it takes place in a vibrant world full of infectious charm and mystery. But Madoka is a Gen Urobuchi series, and therefore takes special care to tear it all down around its irrepressible characters, before finally tearing them down. What's missing from Little Witch Academia is a sense of the stakes: what happens when magic is used for selfish purposes? What's the cost of letting it fall into the wrong hands? From the third episode onward—and if you've seen Madoka you know what I'm talking about—Urobuchi's world is neither merciful nor sympathetic, and no matter the result we are left with the suspicion that none of it matters. It's brutal, it's heartbreaking, and it's a bittersweet story of love and selfishness.

Little Witch Academia has the potential to explore the rougher side of magic, but no show can hope to match the depths of Madoka's darkness.

Though not as popular in Japan as abroad, Little Witch Academia is a pleasant surprise for anime fans and doubtless for Studio Trigger as well. Masahiro Otsuka has not ruled out the possibility of a series or a film if Enchanted Parade enjoys a successful release this fall; considering that its Kickstarter raised half a million dollars beyond the initial goal, there's certainly an audience for it. This first episode is charming and memorable on its own, but leaves an entire world out there to discover. Trigger have repeatedly proven that they can tell a powerful story, and it's exciting to imagine where this one might lead. All we can do right now is believe. 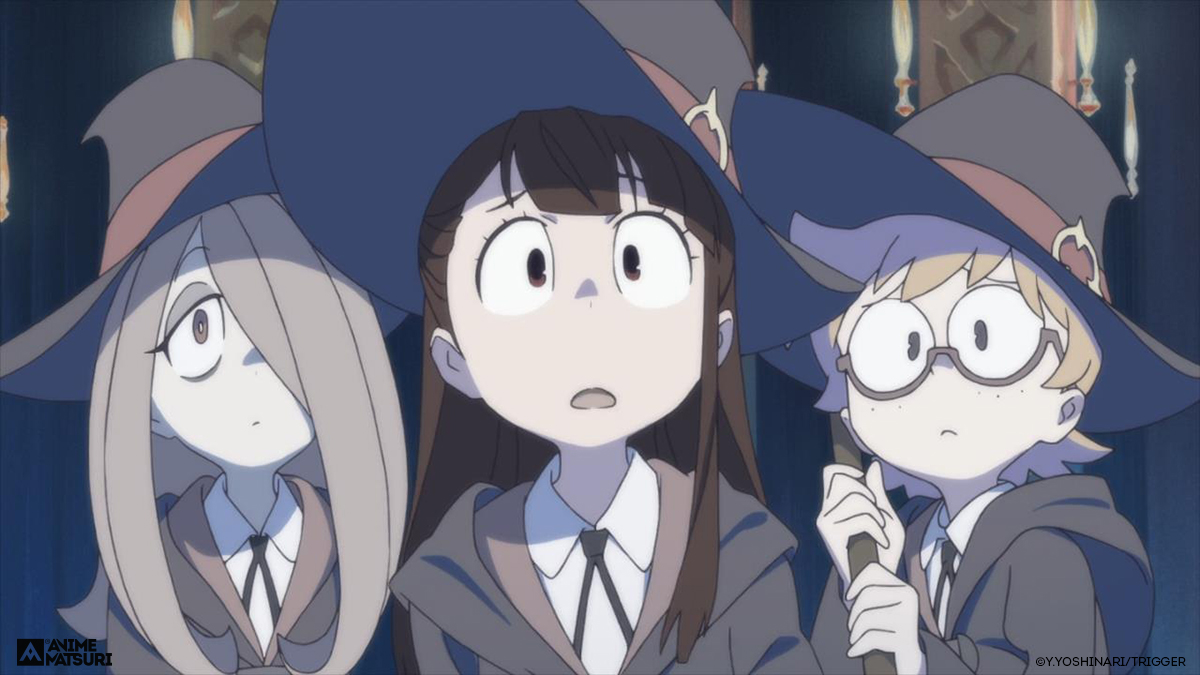