It’s not unusual to find people who make or want to make money playing video games. Of course, we have pro players, streamers, content creators, and even those who illegally sell virtual items on eBay... but until now, no game was willing to pay you just for having fun and/or being a skilled player.

JobTribes, a recently launched mobile game—the open beta released on May 26, 2020—is the first “Pay-to-Earn” video game ever, and the only thing you have to do to make some money is play it! Well, this does sound novel and tempting, right? At Honey's Anime, we've been testing JobTribes for the past few weeks, so keep reading if you want to know what's going on. Or, more importantly, if you want to start earning money!

Challenging, Addictive Gameplay, and You Can Play It Anywhere

Your story starts when Ryu Niito, a jobless teenager addicted to JobTribes, is transported to the Job World, just like millions of other people who were listed as missing. Once there, we learn about the Job Lords, a series of warriors inspired by everyday jobs of the real world, which can be summoned to battle thanks to card-like items called Amulets.

The first thing you need to know is that JobTribes is a browser-based game, so you can play it in whatever device you own as long as you have a registered account. In terms of gameplay, it's a card battle game with gacha ingredients that uses a double rock-paper-scissors system, so all Amulets come in 6 different elements with specific strengths and weaknesses. This means, for example, that all Water Amulets are weak to Nature and strong against Fire, but neutral to Thunder, Poison, and Earth.

While other games use mana and life points, everything in JobTribes is related to money. In every battle, your Budget is what determines not only what Amulets you can summon (because you have to pay them a salary) but also how often they can use their special abilities. You can have 6 cards in your deck, and you decide which Job Lords you will summon first, as all battles start with a 3v3. In our experience, these battles are as strategic as they are fun, and we can only imagine how much better they can get once you spend enough resources and duplicates to upgrade your Amulets and unlock all their skills.

Turn PALEcoin into DEAPcoin, and DEAPcoin Into Real Money… or Digital Art! 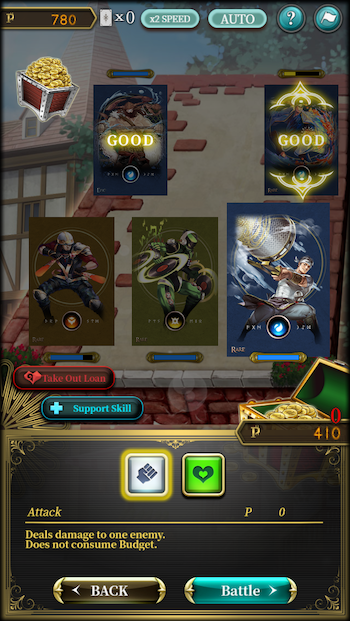 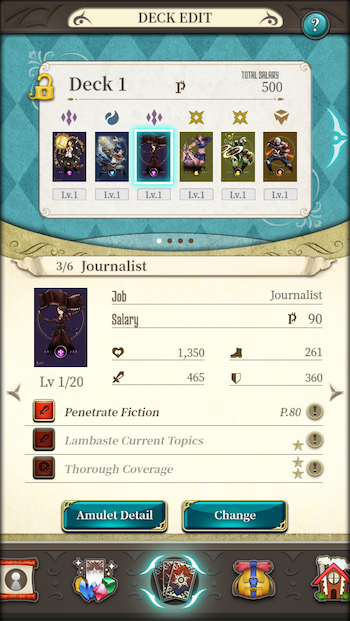 Ok, now you know how to play JobTribes and why these Amulets matter, so it's about time you learn how to actually win some cash. Let's start by saying that JobTribes is a blockchain game, so we first need to talk about cryptocurrency. Although Bitcoins are the most popular cryptocurrency, there are many other options out there, and the one that this game favors is DEAPcoin(DEP).

This crypto asset was created by the company behind JobTribes, in order to conduct legal, 100% safe digital art auctions. At the same time, by playing JobTribes, you can earn PALEcoin, an in-game currency used for player level upgrades, for example. But how do you transform PALEcoin into DEAPcoin? Well, it's quite easy, really. Once every two weeks, a PayDay event takes place, and you can transform your PALEcoin into DEAPcoin through a DEAPcheck. While it all sounds rather complicated, the process is surprisingly simple, so you only need to worry about winning as many battles as you can, as those in-game coins could be turned into real money. For obvious reasons, exchange rates will vary every time, though!

And how much money can you make by playing JobTribes, you may ask? Well, that also depends, but just to give you an idea, we can talk about the events in which we have participated. From July 21 to July 24, for example, there was a Ranking Event that consisted of a series of battles against specific decks, and whoever won the most coins in battle during that period would win 500,000 DEAPcoin as a prize... around 4,000 US dollars. A few days later, there was also a Quiz Event in which we had to answer 7 fairly easy questions for a week, for a total prize of 500,000 PALEcoin. Just for your reference, in August's PayDay, 50,000 PALEcoin were equal to 260 DEAPcoin.

It can look hard to earn a lot of money when you start playing, but once you are more familiar with all these events, exchange rates, and game mechanics, it's not that hard to find enough motivation to play JobTribes for an income. That being said, instead of exchanging DEAPcoins for US dollars, Euros, or whatever your currency is, you can use it to buy digital art, too! That way you can become stronger (if you own the equivalent in-game Amulet) and aim for even bigger paychecks, or just be happy collecting amazing illustrations.

I’m Not a Whale, I’m an Art Connoisseur 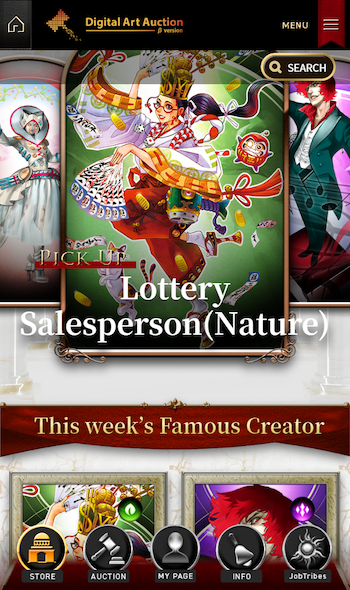 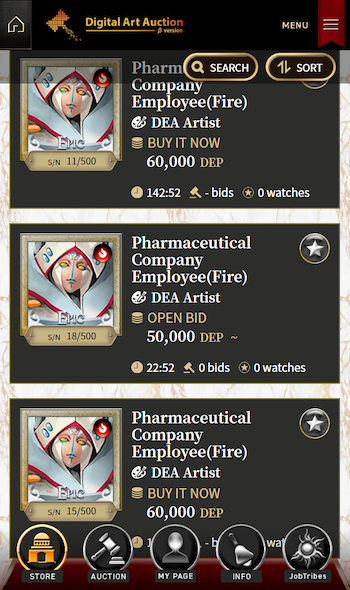 One thing that positively surprised us is that, for a game that gives you money just for playing, JobTribes is super friendly to the F2P audience. Other games require a lot of dedication if you want to get ahead, but you can play at your own pace without worrying too much about other people crushing you just because they pay-to-win. Most of your battles will be against the AI, so if you're committed to the game and come back regularly, you'll have enough resources and coins to push through the main story and beat harder foes for better rewards.

Sure, you can always spend real cash to speed things up, but in this case, it would be considered an investment. In other games, the money you pay goes to virtual items with little to no value outside of that community, and most of the time, you can't even sell it to get some money back once you leave the game. In JobTribes, however, you're not buying Amulets but real pieces of digital art, so trades are pretty much encouraged at Digital Art Auction's site!

Every Amulet features an illustration that has some real-life value, and if you own both a certain drawing and its associated in-game Amulet, that card becomes more powerful. This way, you can still be a whale—a player who throws a lot of money on in-app purchases—and spend money to become more powerful than the rest, but at the same time, you'll be paying for an illustrator's talent and time. And not just random people but mega-famous manga artists, too!

Several Famous Illustrators Are Featured in the Game, So Amulets Are Even More Valuable 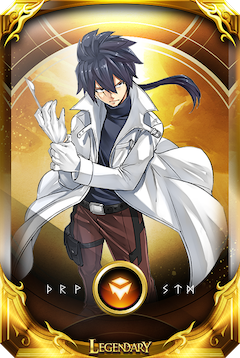 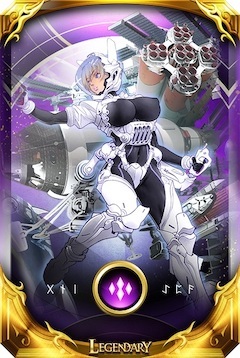 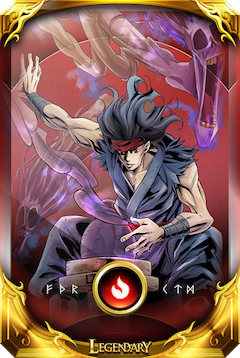 All Amulets feature astounding illustrations inspired by real-life jobs, and it's absolutely fascinating to see how the artists represent the essence of these professions in their drawings. More so when the ones taking the time to draw these Job Lords are those who created your favorite manga or designed your favorite characters!

Terumi Nishii, character designer for Netflix's Knights of the Zodiac: Saint Seiya and JoJo's Diamond is Unbreakable, drew the Potter amulet, while Hiro Mashima, the mastermind behind Fairy Tail, was in charge of bringing the Surgeon to life. One of the most beautiful cards, the Astronaut, is the work of Kazushi Hagiwara, whom you may know for being Bastard!! Ankoku no Hakaishin’s mangaka. Other big names involved are Golden Boy’s Tatsuya Egawa, GetBackers' Rando Ayamine, Salaryman Kintarou's Hiroshi Motomiya, and Maria†Holic's Minari Endou, to name a few. What a list of gifted men and women!

For some of you, JobTribes could be the entry point to digital art appreciation... but in this case, buying these illustrations also makes you more powerful in a video game. It's ultimately up to you to decide if you want to play it for money or for digital art, as well as if you go the free-to-play route or you want to take this as an investment, spending some money to buy digital art and make things a little bit easier. After all, beating other people in a TCG is OK, but doing so with a character drawn by your favorite artist definitely has a different, sweeter taste to it.

Are you tired of wasting your skills and money in games that don't give you any economic return? Maybe JobTribes is what you're looking for. If you're reading this, then you have a web browser to play it, so head to JobTribes' website and start making money right now!