Hoshiai no Sora (Stars Align) is, without a doubt, a sleeper hit of Fall 2019 — it began with a mere 10,000 Plan-to-Watch members, but now has over 47,000 watching members and one of the highest score gains this season. It's a show that presented itself as a run-of-the-mill teen sports anime in its promotional videos prior to release, so no one could've predicted the hard-hitting themes that form a compelling backdrop behind the members of the Shijo Minami Middle School boys' soft tennis club — a harrowing gallery of poor familial relationships.

To give a quick summary of the show's premise, Hoshiai no Sora follows a boys' soft tennis club on the edge of being forcefully disbanded due to their incompetence and lack of accolades. In his desperation to find capable new members, club president Toma Shinjou enlists the talented new transfer student, Maki Katsuragi, to help the team (im)prove themselves to prevent disbandment. 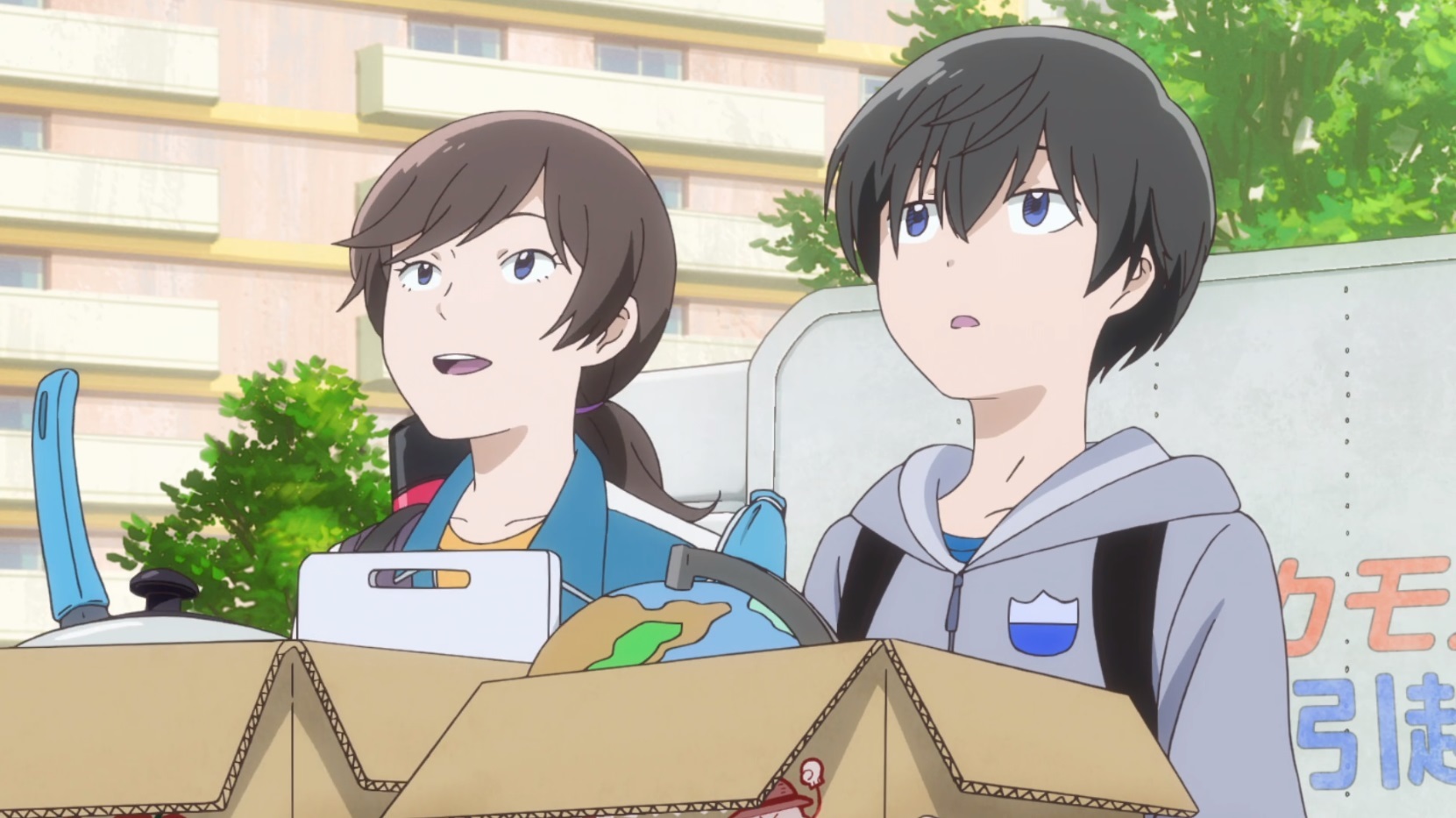 The first episode begins as innocently as any other teen sports anime, with the "star" of the show, Maki Katsuragi, moving to a new apartment and a new school... but something is already amiss. The opening dialogue between Maki and his mother indicates that they've moved numerous times before, though it's easy to brush off as an insignificant detail. As it turns out, they've been trying to escape from Maki's abusive father, who shows up at the end of the episode to extort money from them. It's revealed later in the show that, because he is registered as Maki's father, not even a restraining order from Maki's mother can prevent him from finding out at a government office where his son lives.

There are many incredible moments of pathos in the final scene, both visually and thematically. The raw depiction of domestic abuse delivers a physical and metaphorical slap in the face, subverting the expectations we had for this new show; the palpable despair on Maki's face as he's confronted by his imposing father; the implication that Maki's mother knows about it but leaves her son to deal with it, even though she is a genuinely caring parent.

But it doesn't just end there with the first episode. There are indicators of another dysfunctional family from Toma Shinjou, Maki's new friend that convinces him to join the boys' soft tennis club. A heartwarming scene between Maki and his mother over breakfast sharply cuts to the Shinjou residence where Toma eats alone in an empty room, visually enforcing his feeling of isolation at home. Although her reasons still aren't clear, Toma's mother expresses her detestation of being left alone with him to Toma's brother. 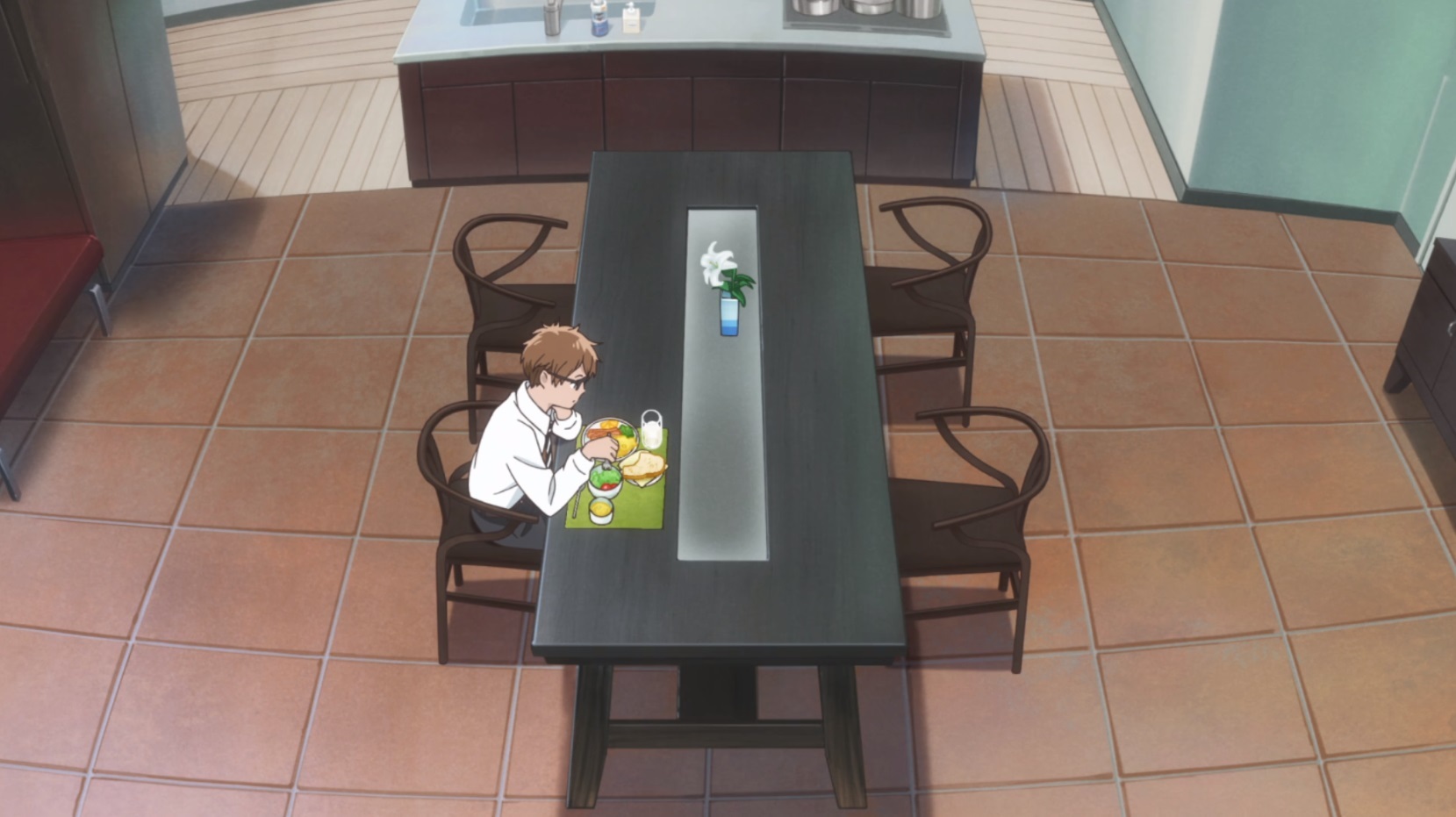 From there, the harrowing gallery of poor familial relationships in Hoshiai no Sora continues to add new exhibits, even in the final stages of the show.

Itsuki Ameno's mother poured boiling water on him as an infant (much like what happened to Todoroki in Boku no Hero Academia), leaving a dreadful scar across his entire backside. As a result, he gets changed separately from the rest of the club.

Rintarou Futsu is the illegitimate child of a teen pregnancy who was put up for adoption, and although he has loving parents, the truth behind his birth negatively affects his self-confidence. In episode 10, the latest episode at the time of writing, we're left with a cliffhanger that further challenges Rintarou's psyche: his birth mother wishes to meet him.

In the eyes of his father, Tsubasa Soga lives in the shadow of his elder brothers' achievements in soccer, which Tsubasa stopped playing in elementary school because he didn't feel like he was good enough. When his father slaps him in response to his complaints, causing Tsubasa to fracture his wrist upon falling, he doesn't even go to help him — he just stands and stares.

Shingo Takenouchi's case isn't as explicit, but it's implied that his dad remarried and had another kid with his new wife. Shingo's step-mother is overly protective of her daughter and typically dismissive of him, but shows some progress with him by the end of the episode.

Nao Tsukinose's mother is a helicopter parent taken to the extreme. She frequently complains to the school about minor things and unfairly pressures Nao to drop soft tennis so he can focus on his studies. This affects him so deeply that he devises an immoral plan to get an essential practice match cancelled, unable to cope with the thought of disobeying his mother.

Taiyou Ishigami is the socially insecure type, and it's easy to deduce a likely reason for that. His mother and father are helicopter parents like Nao's, but in the "overbearing amount of positive energy" way. Taiyou is visibly embarrassed by their public behaviour and it's hard to blame him.

Finally, the biggest, and possibly most compelling one of them all: a true-to-life example of someone questioning their gender, Yuuta Asuka struggles with their own existence and doesn't feel ready to make that kind of decision. Despite Yuuta's need for acceptance, Yuuta's mother erupts into a barrage of intolerant statements like "I have two daughters already" and "I thought I raised you properly." 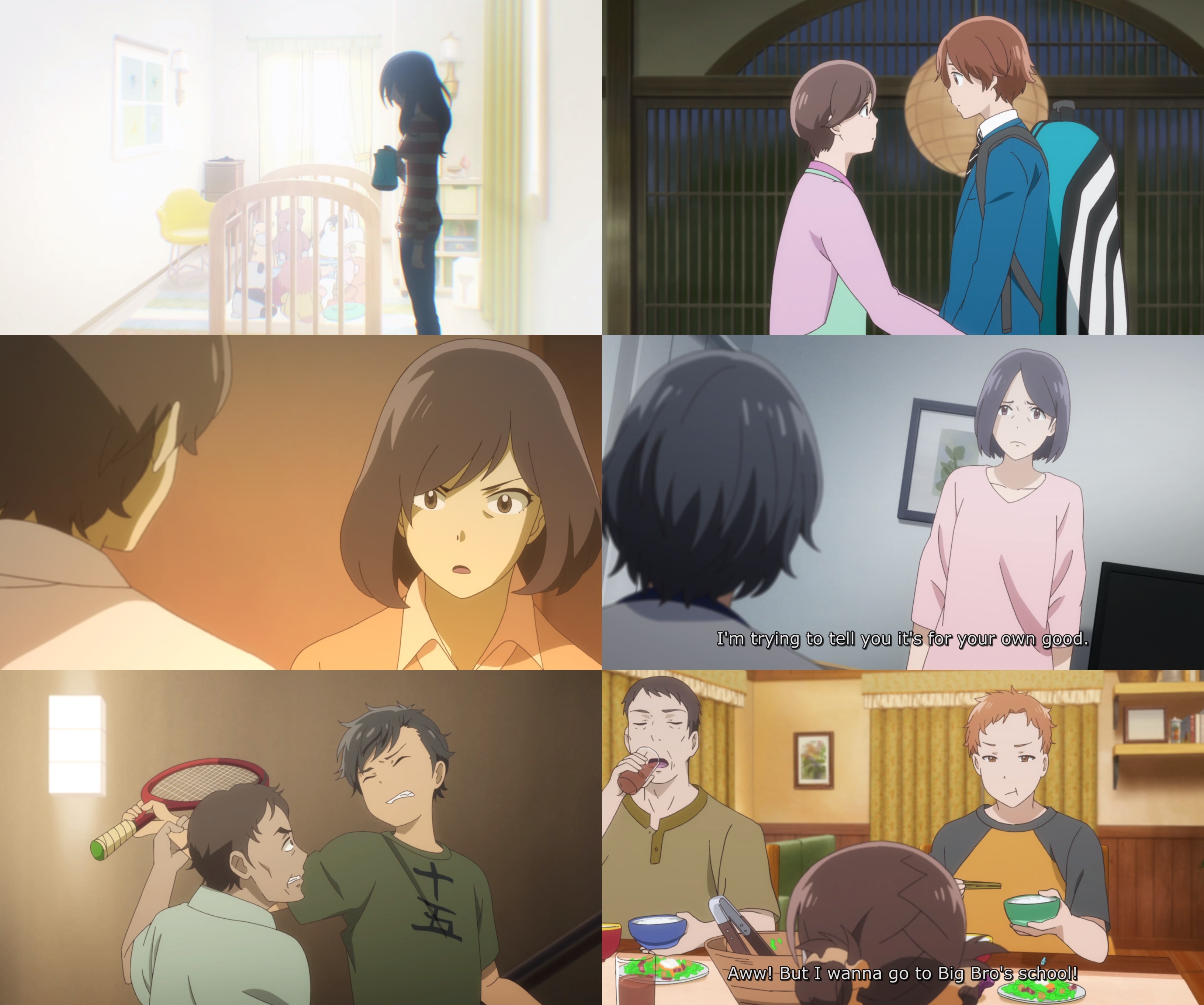 Hoshiai no Sora is no ordinary teen sports anime — the genre typically holds up perseverance and teamwork as the driving forces behind its characters. Hoshiai no Sora, on the other hand, emphasises the domineering nature of family in adolescence and the simple desire to be one's self. However, as a result, the "teamwork" aspect is even more important and more nuanced than before.

What Hoshiai no Sora demonstrates best of all is the impact of positive masculinity among teenage boys, that's it's okay to confess your insecurities and that you shouldn't bottle things up as Nao did. Even those with the toughest exteriors are struggling on the inside. When any member of the club is struggling with personal and family issues, another member is there to listen and support without question. Toma even confronts Maki's father himself, which incentivises Maki to follow suit. When the ordeal is over, Maki physically embraces Toma and cries into his shoulder, having been relieved of a lonely burden.

Another poignant show of support is Maki's immediate respect of Yuuta's identity and use of appropriate pronouns without any hesitation, citing his own experience with a transgender man he notably treats like family. Confiding these moments of anxiety with others isn't easy by any means, and it just goes to show how even a small bit of understanding can go a long way. It also spawns positive changes in behaviour, which we see when Itsuki begins to feel comfortable changing clothes with everyone else despite his scar. 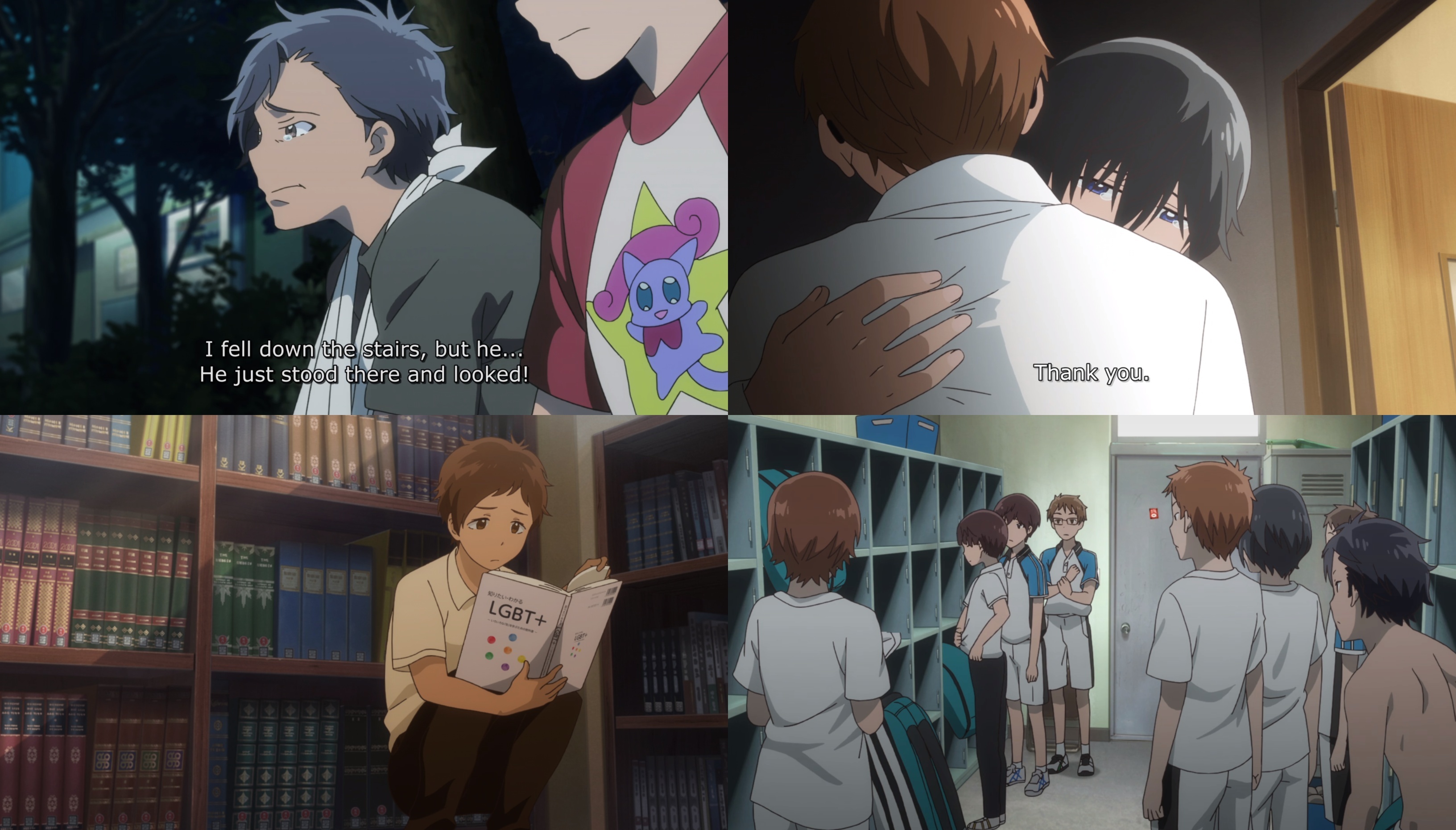 There's no denying that parenting is incredibly hard work, but it's easy to do what seems like the right thing in the wrong way. To quote Maki, "the problem is, the parents don't think it's an issue. They justify it all saying it's 'for their child.'" Above all else, Hoshiai no Sora uniquely depicts just how much family problems can negatively affect teenagers in the most vulnerable period of their lives. Sometimes, it's as simple as not being there. Even though Maki's mother genuinely cares for her son, Maki suffered on his own against his abusive father until Toma gave him the courage he needed. Hoshiai no Sora recognises the sad truth that parents won't always get along with their children.

That being said, families in Hoshiai no Sora (and in life) are more than just the poor parental relationships they contain. Despite being a part of their father's unfair expectations, Tsubasa gets along very well with his brothers, and Toma's brother Ryouma is his go-to for advice on a number of occasions. Yuuta's sisters are also incredibly supportive in Yuuta's predicament, even allowing Yuuta to borrow their clothes

The main objective of the story, winning a single match to prevent disbandment of the boys' soft tennis club, is easily lost in the character-driven drama, and that's okay. In Kaze ga Tsuyoku Fuiteiru, one of the highest-rated anime of Fall last year, most of the characters didn't actually care about marathon running. Rather, team sport was a catalyst for them to unload their insecurities and work through their personal issues. For the Shijo Minami Middle School boys' soft tennis club, it's how they can get away from domestic struggles and be themselves with people who understand. With a large cast like Kaze ga Tsuyoku Fuiteiru, I think Hoshiai no Sora would've benefited greatly from a second cour to fully flesh out some of its conflicts, but the show's brave and down-to-earth depictions of family issues is still admirable and absolutely worth checking out.

Arakawa Hiromu created a world in which women can be military leaders, run their own businesses, and be powerful alchemists without anyone batting an eye. Here are some ways Fullmetal Alchemist is breaking down barriers for females.