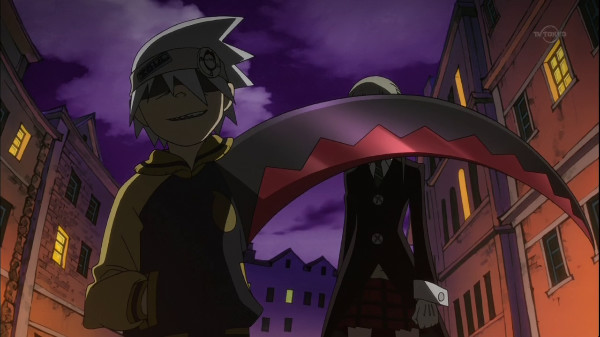 In many anime, the weapon is as important as the character. Sword Art Online's Kirito wouldn't be the same without his dual swords, Elucidator and Dark Repulsor. The Tessaiga from InuYasha has an important backstory and a powerful transformation. Sometimes, though, anime characters don't just have powerful weapons - they are powerful weapons.

The idea of a character becoming a weapon is explored in more than one anime. Sometimes the weapon characters are appropriately badass. Other times they're moe-fied versions of deadly real-world weapons. Whether you're looking for a cute girl who is also a battleship, or a scythe with a sharp personality, the anime below are full of personified weapons.


Some anime take the character-as-weapon theme literally. In these anime, the characters literally turn into the weapons they represent. The most well-known example of this is, of course, Soul Eater. In Soul Eater, characters are split up into two categories - weapons and their wielders - then paired up. When the time to fight comes, the weapon characters transform into their weapon forms. If the pair works exceptionally well together, they can achieve stronger forms and use special maneuvers.


Valkyrie Drive: Mermaid uses the same concept as Soul Eater. Instead of using the idea to learn about friendship, power, and your own inner strength however, Valkyrie Drive uses the idea as an excuse to fanservice. In this anime, characters who are infected by the A Virus gain the power to transform into weapons when they're sexually aroused. Metaphor, much?


An anime that takes the cute-personified-weapon theme up a notch is Upotte!!. This anime would belong squarely in the "cute girls doing cute things" genre… if it weren't for the fact that each girl represents a deadly World War II era weapon.


Back to the more serious side of things, Noragami's weapons are also created through transforming people. In this case, though, the people are already dead and it's their souls that become weapons to be wielded by gods. It's a strange way to be saved from eternally wandering the earth as a soul, but it's not the worst.

GIF from: Arpeggio of Blue Steel


Anime is known for being larger than life, so it stands to reason that some of its weapons are, too. Not all the personified weapons in anime can be physically held and wielded. Kantai Collection and Arpeggio of Blue Steel feature pretty girls who are actually the personified versions of gigantic and deadly battleships. In both anime the girls fully control the ships through a special connection. Arpeggio of Blue Steel takes it a step further by making the girls literally embody the ships, with their personalities and very reason for existing linked completely to the battleships they represent.


Kantai and Arpeggio have the oceans and seas covered, but Strike Witches takes to the air. The witches in Strike Witches are capable of wielding huge weapons modeled after WWII fighter planes. They also don cute animal ears while they're at it, because at that point, why not!


Finally, while the characters in Girls und Panzer might not literally turn into their weapons, the anime definitely deserves a honorable mention. Because seriously, they're school girls who battle war tanks for sport.

Anime Characters Who Can Turn Their Souls Into Weapons


You don't need to literally turn into a weapon to create one from your body. Some anime draw weapons out of characters in other ways. The zanpakuto in Bleach, for instance, is a weapon that's specific to its wielder. Through working together, both the blade and its shinigami grow stronger. The weapon is born out of the wielder's heart, and reflects their true nature.


Guilty Crown is another anime where your best weapon is literally inside you. Shuu Ouma has the power to pull swords out of people's souls.

GIF from: Beyond the Boundary


Sometimes, though, weapons aren't created from something so ethereal. Several characters in Beyond the Boundary, Tokyo Ghoul, and a few others literally use their own blood to form a weapon.

The sword might be mighty, but when it comes to changing your very being and lifesource into a weapon, we think we'll stick to the pen.