Set in post-apocalyptic Neo Tokyo, Akira is a gritty tale that ponders the future of humanity. Despite the film's heavy content, its playful protagonist Kaneda manages to singlehandedly balance out the story's grim tone. Here's a GIF collection showcasing some of Kanada's best moments. 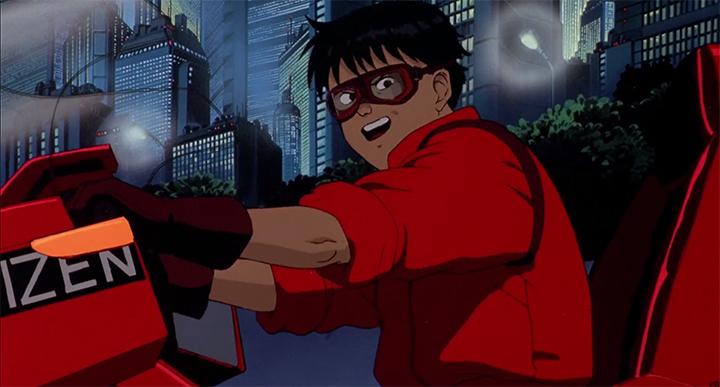 One would expect a serious film like Akira to have a serious protagonist, but Kaneda completely defies that expectation. Although he has his cool moments, he has an equal number of funny ones, and his goofiness is a breath of fresh air. Kaneda is a well-rounded lead whose unique personality is necessary in Akira to prevent viewers from getting overwhelmed by the story's potentially oppressive heaviness. He's cocky and fearless, but his cluelessness and bad luck make him likeable instead of irritating. He always shows up at exactly the right time and does exactly the right thing, but whenever he's at the risk of being too cool, he pulls an idiotic move that humanizes him and lightens the mood.

Also, he manages to do the impossible without ever transcending basic human ability. Even though Akira is filled with all kinds of unnatural and unbelievable occurrences, Kaneda himself never displays any kind of superhuman power. Instead, he relies on whatever resources he has on hand and manages to scrape by, which is what makes him so relatable. As viewers, we're drawn to the strength of his character, and we find him especially compelling because the rest of him is so normal. We have absolute faith in his ability to save the day, but because he's grounded in reality, we're always surprised by what he has in store. Akira is a cult favorite that has withstood the test of time, and Kaneda has surely played a large part in its ongoing success. It doesn't hurt that his bike is also to die for.

Take some time to appreciate what a great character Kaneda is with these GIFs from Akira!

Kaneda and his gorgeous bike

The perpetual skirt chaser is doing just that.

Fearlessly taking down the enemy

How sweet is that outfit?

Getting caught in the blast

Dodge for your life!