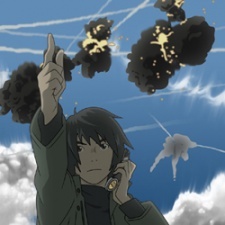 Dangerr Nov 20, 2012 10:19 PM
I always hope; the universe is too rich and intriguing to leave alone, and there's still plenty of plot-points that could be used to continue the story at large.

Dangerr Nov 20, 2012 10:03 PM
I could actually make a list of unaddressed plot-points, but I have this weird hunch that they may have had more planned down the road, if AO proves successful enough. : P

Of course, there's always people who'll be upset that it didn't meet their expectations, which I believe is a very flawed approach towards entering another series; naturally, this'll easily ruin people's objectivity. To be frank, the most recurring (and legitimate) complaint I've seen the show receive is the apparent lack of direction and characterization, which even I'll admit, has problems. But to the extent others have said? I don't buy it. Of course, when you're as invested in the plot, setting, and themes as I am, I can even claim to be pretty biased in my own way as far as this series goes: those who are less invested, and are looking for compelling characters to bridge that gap, it becomes even harder to see the other appeals of the show, and from there, it becomes a snowball effect. So... In that regard, I can empathize, somewhat, with people's complaints. Of course, complaints spawned from ignorance and misunderstandings over what actually happened always gets to me as well, though the show can be unnecessarily convoluted, as well. This is definitely a show where your mileage may vary, but I'll agree, in the end, that I don't believe enough people gave it a fair shake.

Dangerr Nov 20, 2012 9:47 PM
Thanks; again, I can understand people's anger, but I fail to see how this series objectively gets lower than a '6', or higher than an '8'. It's certainly nothing amazing, but it's far from bad. Regarding the finale, I appreciated the boldness of it, and it managed to be tragically bittersweet in a way I wasn't expecting. It was a pleasant surprise. I actually don't even have problems with people's complaints, in general; I only hate it when people give one-sentence statements on how it's "garbage", without substantiating their position further. When that happens, there's no actual discourse over the contents of the episode - just pointless bickering. The same can go the other way, but that obviously hasn't been a problem with this show, heh.

Sunao Oct 23, 2010 8:26 PM
Yes, college is keeping me really busy (sorry I'm replying so late)... I barely watch anime or read manga now, just these days that I had time. I'm watching Liar Game (a drama series) right now, and the final episode is almost 3 hours long. :/ I wonder how I'll manage to watch it...

Slam Dunk is great but there's a lot of huge differences between the anime and the manga... The end is completely different and they made up a team >_> From what I've watched seems good enough though. So... who's your favorite character?

Yes, it does! "ri alto" literally means "laughed loudly" in portuguese. It sounds weird in english so we use lol. There's also a restaurant called Rialto, haha.

Sunao Oct 12, 2010 10:12 AM
Hello there! It's been quite some time... College is making me really busy. Since I started studying again I've only watched like two anime episodes. lol
I see you're watching Slam Dunk... Are you enjoying it?

Sunao Aug 15, 2010 2:34 PM
Oh, sorry, my MSN got really weird when we were talking... Some people (including you) showed up as offline even though you were online. I tried talking with you but it didn't work. >_> I think I fixed it now.

Sunao Aug 10, 2010 10:10 AM
Phew, it worked. You're added now.
Those games are pretty stupid, the only one that I really like is Mafia Wars. Forumwarz is pretty cool too but it isn't from Facebook. What're you playing on your 360 lately?

Sunao Aug 9, 2010 1:02 PM
Wait... I didn't see that message that pops up when someone adds you. D: I waited some time and it didn't show up. Can you add obluda.lovino@hotmail.com then? I'm still using it while I add who's missing in my new MSN.
I see. I started using Facebook just to play games haha. But now I only use it to talk with a friend who's studying abroad. I'm on msn all the time too.

Sunao Aug 8, 2010 7:05 PM
Graphic Design. I think my class is small because this course only started this year... My class is the second one that they opened.

Oh, of course! My msn is sunao@hotmail.com.br now, I forgot to change here. Btw, do you have a Facebook profile?

Well... I'll start college tomorrow. There's only 10 people (including me) in my class. lol

I see... It's annoying sometimes but at least your name is cool.

No no, it's pretty common! My friends don't smoke but some of them drink. I hate both. And I agree with you, it's all the same thing. lol
I live in a quiet area too and yeah it's pretty nice. When I lived in a apartment you could hear the neighbors's noises all day and they could hear everything you did too.