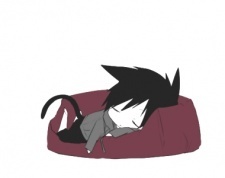 SteCasseKing Jul 2, 2020 11:35 AM
Late Reply, so i don't know if you still care or not considering you haven’t got on MAL ever since you responded back in April which means your a pretty inactive person. I feel bad for you if you went ahead and watched the Anime and see what it has done to your WN/LN.

I'm not really sure if Death March is a satire or not, we have LNs like Smartphone and Ragnarok who seem to take themselves seriously despite doing nothing but cliches (Especially Smartphone). Unlike Konosuba which does these cliches and makes fun of them at the same time, These three do them in stride and seem to never attempt to parody them, and if they tried, then they did a poor job at it. (Again, Smartphone's the biggest one here. It and the others does nothing but shitty cliches like Overpowered+Blank Slate+Self-Insert+Gary Stu who solves all problems effortlessly and is loved by everyone except for his inferior males who are jealous of him, but his surrounding females will always defend him, Harem collecting who's members are all cutboard cutouts with only one trait that they will be known for, Etc. They all don't do much to do something new!).

Death March tried to be a fun Slice-Of-Life Harem show, but it failed spectacularly on every front due to the author's and the studios overall incompetency. And one thing can be easily done to fix the majority of the problems, take out the ecchi, loli, and harem crap. We have seen time and time again that Ecchi+Harem completely ruins shows. And Death March is no different.

It honestly feels like all these novels were only made to cash in on the SAO craze and that's probably the sole reason. Notice how all these authors wrote the novels after the SAO anime came out and they have no other writing credit besides that lone novel. Maybe we've seen different series, but Death March definitely isn't a satire nor is it trying to be one, while Overlord succeeds at being a realistic "dark dramatic intelligent drama".

However, if i'm wrong on this, and Death March is actually IS a satire. Then the Anime did a really, REALLY shitty job at trying to convey it is one.

PS. This post was originally MUCH longer, but i cutted it out because it was a novel sized reply, let me know if you wanna see it

SteCasseKing Jul 3, 2019 7:50 PM
You gave death March (Which is Generally seen in the anime community as being tied 2nd place for the worst Isekai alongside Smartphone.) a 9, and Overlord a 4 (Which is generally seen as one of the best Isekai out there)? I did hear the LN for Death march were better, how MUCH of it is better is the question i have. since i'm judging Death march based on the anime.

Death march looks and feels like another one of those Generic Harem shows that tries to be like Sword Art Online, But fails miserably at it with a main character who not only looks very similar to kirito, but is somehow even worse then him as a character. Which is an accomplishment i have to say. The side characters are just as bad, i only remember them by their hair color, not by their names. and no, they don't have distinct personalities. The Voice acting is Dull, Especially from the MC, he sounds so lifeless and barely reacts to anything thats happening, This is most notable when he was about to be raped by the Loli girl. OST is bad too, the makers of the show actually had the Balls to use a party horn as an instrument, Their Music budget must've been close to nothing. Finally, there's a plethora of unnecessary scenes of the MC eating and talking about the details of food, this literally happens in every episode.

You need to watch Death March again to see how bad the entire series is.

Honestly, judging and grading a Anime/Light Novel/Manga based on Equity sounds like a very bad idea if you ask me seeing as how they can be multiple genres. If you go by that logic, SmartPhone, Sword art online, and The Master of Ragnarok & Blesser of Einherjar Being part Slice of Life's (The Latter is considered the worst Isekai) are good shows and deserve a grade of 9 like Death march

I hate siding with someone like bluemayonase who spouts alot of Derogatory language, but i kinda have to agree with him.

You also only went over the main cast of characters in your review. You never said a single word about the side characters, who helped separate Overlord from the other bad isekai shows who don't develop the side characters at all. This is your only review where you don't talk about them, how Hypocritical of you to not talk about the SC's on the Novel you hate, Not giving OL a chance. its a shame so many people liked your review, they must be Haters of Overlord who fail to see how good it is compared to Other Isekai and shows like SAO

(lastly, for your comment on Bluemayonase's page, a 4 IS seen as a terrible score as it states that a reviewer thinks a show/LN/Manga is "Bad")

bluemayonase Jan 5, 2019 8:55 AM
No overlord is not "Ovrated" you just give things ratings based on taste, not how well executed something was.

You basically went into a beyond retarded rant about how ainz is a bad character and all the characters are not good with no reasoning other than you dont like them. All the characters are well written and are core components to what make the story appealing. From how they act in situations, backstory, and the choices they make with the inhabinets of the world. Your issues with Ainz are only nit picks, him being worried about AI isn't a surface level problem and is an actual concern thats interesting to see. You downplay it likes it hinders the story when it doesn't in the slightest . Then ends it with it's "overrated". None of your reasoning point towards a legitamet score. The only thing true is you being a triggered biggot mad that someone likes something thats actually good.

And this guy Gives Death March a 9, and gives OverLord a 4. LMAO
You have qualms with overlords characters and story when their executed extremely well yet you praises the hallow bellow average characters of death march to high heaven. The same reasoning of "I dont like so it bad" or "I like it so it good" mentality is also being used on the death march review.
Death march is your typical generic trash without a single identity of its own. Story is the same old, characters bland as hell, mc bland as hell, world bland as hell, art is average at best. If overlord is a 4 from your standards and "reasoning" death march should be a -1. Horrible reviews overall man.
If anyone from his overlord review, he's just trolling. Lmao

rhazxor Jan 25, 2018 7:54 AM
Your review on overlord is more like a rant ,I know its your opinion but there's so much words that were unnecessary.

wgbho23 Jan 11, 2018 6:48 PM
id like to know what you think of the death march anime, how it compares to the LN, how faithiful of an adaptation it is etc from ep 1.
All Comments