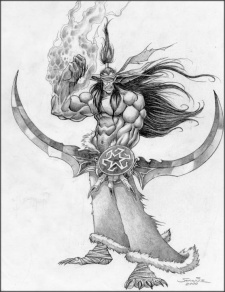 skualninja Jun 16, 2013 1:05 PM
As expected Gantz had a crappy ending, I'm so dissappointed, a masterpiece got destroyed :(

skualninja Jun 10, 2013 12:24 PM
Yeah me neither, I just hope the author releases a new series related to Gantz explaining stuff...this ending is gonna suck. Or maybe he's just trolling us and the "end" in reality its the end of the fight only...meh.

skualninja Jun 8, 2013 5:06 AM
Hi man, I see you started Terraformars. I read the first 6 chapters months ago, but it seems that the scanslator group has released a ton of chapters, time to continue reading!

skualninja Nov 2, 2012 12:58 AM
Deadman Wonderland is stopped for now, the mangaka is on a maternity period and we don't know anything about the next chapter's release date.
I liked both mangas, you can start reading any of them first, doesn't really matter :p
If you liked Berserk you will probably like Devilman, because a lot of scenes here will remind you of the ones from Berserk, Miura took a lot of inspiration from this manga.

skualninja Oct 16, 2012 12:17 PM
I'm glad you liked it.
That's good you made a contribution haha, old animes and mangas have a poor list of characters and their description, most people only care about mainstream stuff.

You should read Devilman, I'm sure you will like it.
Check this one Hotel: since 2079 it's only 40 pages long, I really liked the end :p

If you like bizarre stuff you can try Franken Fran, this manga is really weird, there's no other way to describe it.
These two are kinda old, Parasyte has a lot of psychological stuff and some gore (don't expect something gruesome). Devilman is a masterpiece of the 70s decade, I loved the story. It is the manga that mostly inspired Kentaro Miura to create Berserk.
Deadman Wonderland is awesome, the story is well done and the characters are so deep emotionally. Bad thing is, the author has stopped releasing chapters for a while, the manga is almost finished but she won't be releasing chapters until some point at 2013.

Any other genres you are interested in apart from gore stuff? :p

skualninja Sep 30, 2012 3:51 AM
Yeah from that part onwards it becomes awesome, the drawings won't become so much better, that's the author's drawing style

skualninja Sep 12, 2012 5:17 AM
It's not bad that Gantz is ending, a good manga shouldn't be dragged out for no reason, that would make it worse.
I'll give it a look when I finish some stuff
You should try reading Psyren, if you liked Gantz then probably you will like this one too, there isn't any gore in it though
http://myanimelist.net/manga/3438/Psyren

skualninja Sep 11, 2012 1:21 PM
wow man, I just finished Gantz's chapter 370, the anime sucks compared to this haha, I barely remember anything but the end was complete crap.
Phase 3 is AWESOME, I can't wait for the next chapter

I'm currently watching and reading so many stuff, when i end Gintama I'll probably read Gantz. The anime ending was crap, since I finished it i wanted to read the manga...so many things to do man

I plan to read Gantz at some point, I watched the anime a long time ago and I liked the premise but the end was disappointing. Right now I'm busy with other stuff haha, I will read in the future.

I took a look at your manga list, you should start Shingeki no Kyojin, the gore is awesome. I love the "apocalyptic world" setting, that mixed with fantasy and gore is epic.

skualninja Aug 27, 2012 12:05 AM
Hi man, I just read your comments about NOiSE, that manga is a prequel made after finishing BLAME!. You should read BLAME! if you liked NOiSE, is so much better than it's prequel.

Right way of reading them is first read BLAME! and then NOiSE, you did it the other way around so you probably didn't understand what was going on there haha