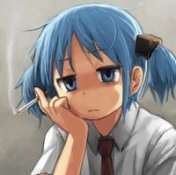 TheyCallMeTMoney Jul 16, 3:50 PM
Appreciated your review on Sakamichi no Apollon. Totally accurate on the mediocre characters and plot, but good music and animation. (The jazz was my favorite part of it.) WELP, if you know of any other good music anime, please share because this was extremely disappointing. 😂

AbdullahYM Jun 23, 11:10 AM
good review about Sakamichi no Apollon but Yurika and Jun were the worst part about this anime +1 Kaoru did nothing wrong

DiscoMilf Mar 3, 2018 9:03 PM
You're never gonna read this, but I think your Space Dandy review nailed it. Aside from one episode, it's fucking boring. However, I don't agree that it's episode 7. Episode 9 is the one that caught my attention. It was the only episode where I felt the series attempted to emotionally invest me in it, instead of trying to win me over with zany antics.

Also, you seem to attract a lot of people who think unpopular opinions equate to not understanding a series. Guess you're doing something right then. Or were.

Hope you're doing well wherever you are.

Zexion333 Feb 2, 2018 7:35 PM
Ive never done this before but a lot of people gravitated toward your Space Dandy review and I just wanted to say I think it was pretty damn wrong....you didn't grasp the show at all lol and I'm not a fan of false reviews Space Dandy has more substance than Bebop...

BoggleJ Apr 3, 2017 7:17 PM
of course your average rating is low and youve dropped nearly a hundred anime. You must really not like much do you?

n00t Jan 24, 2017 3:59 AM
Hey dude, just curious after reading your Kids on the Slope review. As someone who actually watched it for the jazz, I certainly was disappointed when I found out how much jazz they actually incorporated into the show. But SURELY the story wasn't bad enough to warrant a 5/10 lmao

I get that it was pretty generic and some bits were lackluster, but the story wasn't THAT bad was it?