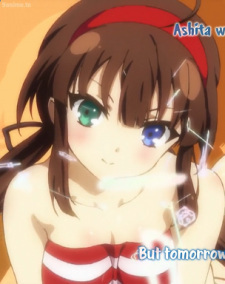 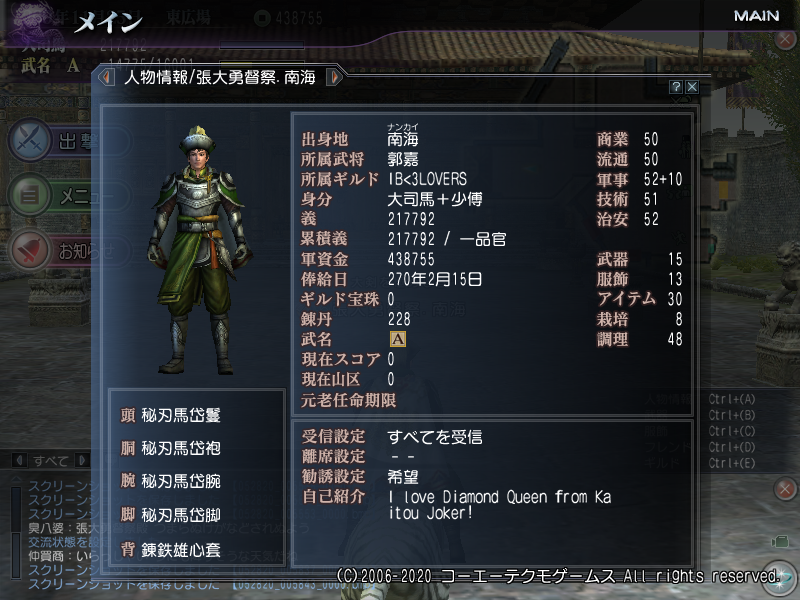 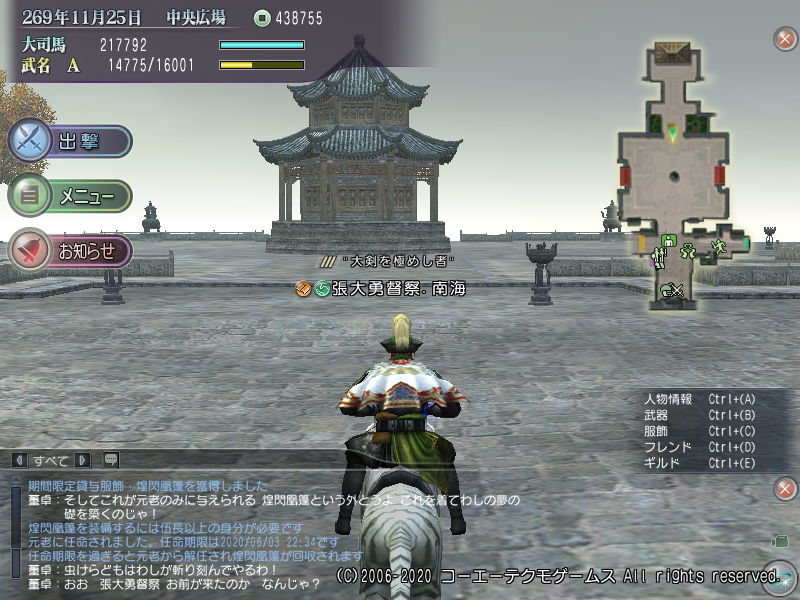 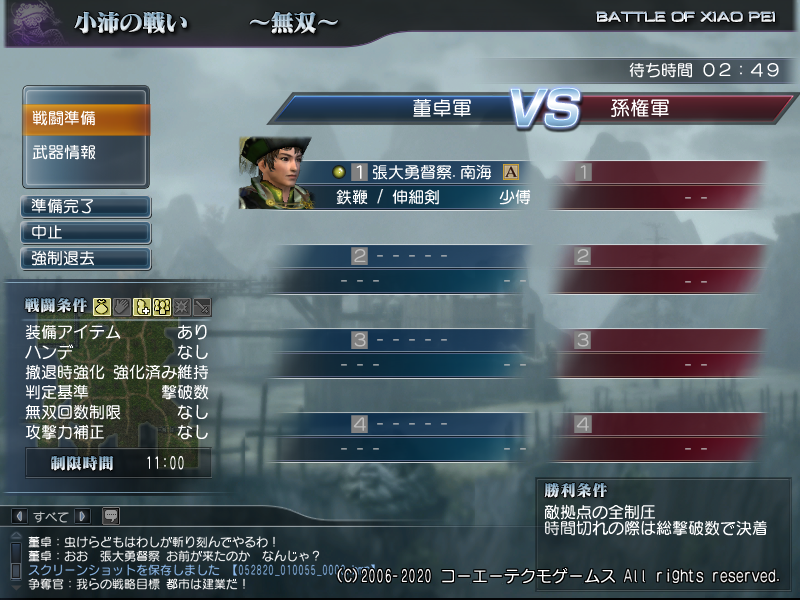 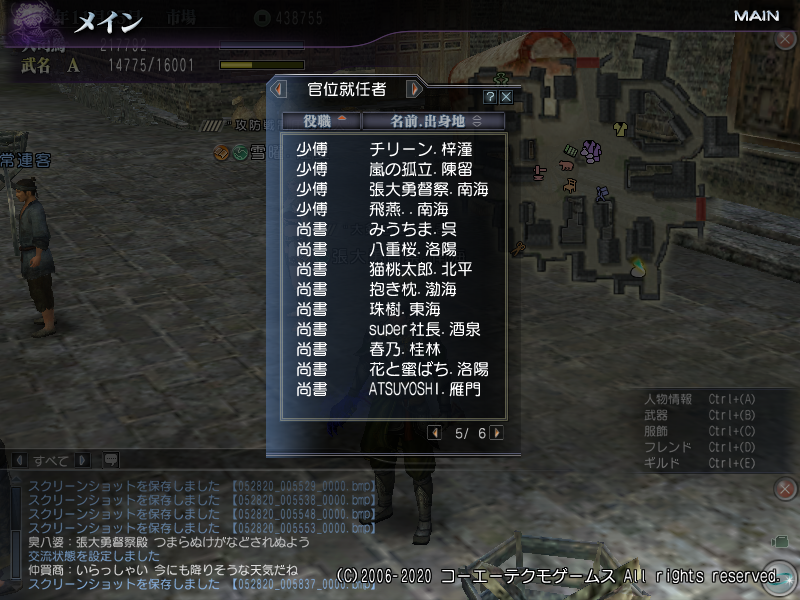 All the most prestigious ranks from top to bottom

iamYuyaSakaki Apr 29, 8:18 AM
Video recording the moment I reached 200k honor and getting my cape, staying with me forever !!!!!!! 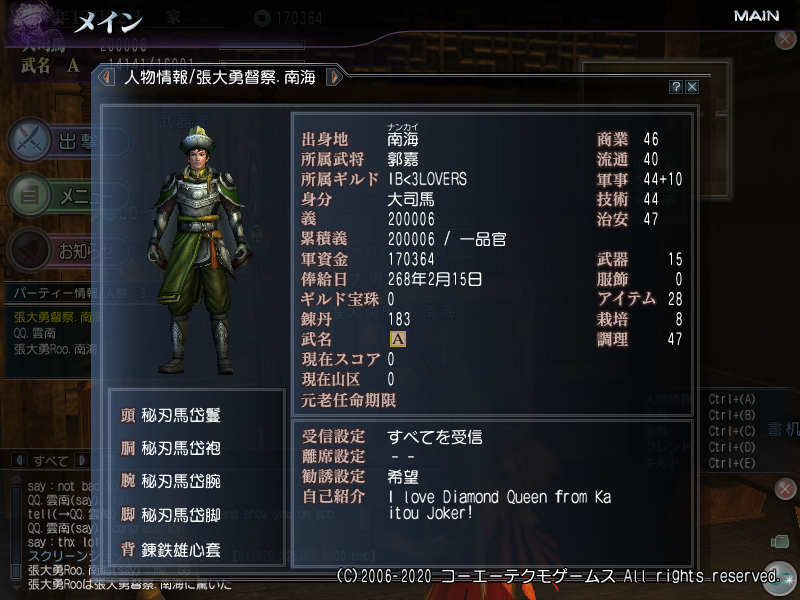 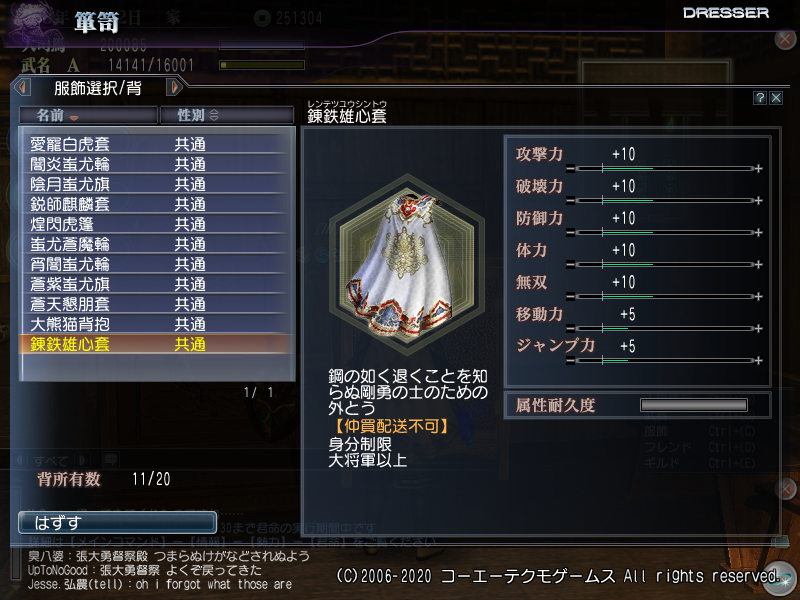 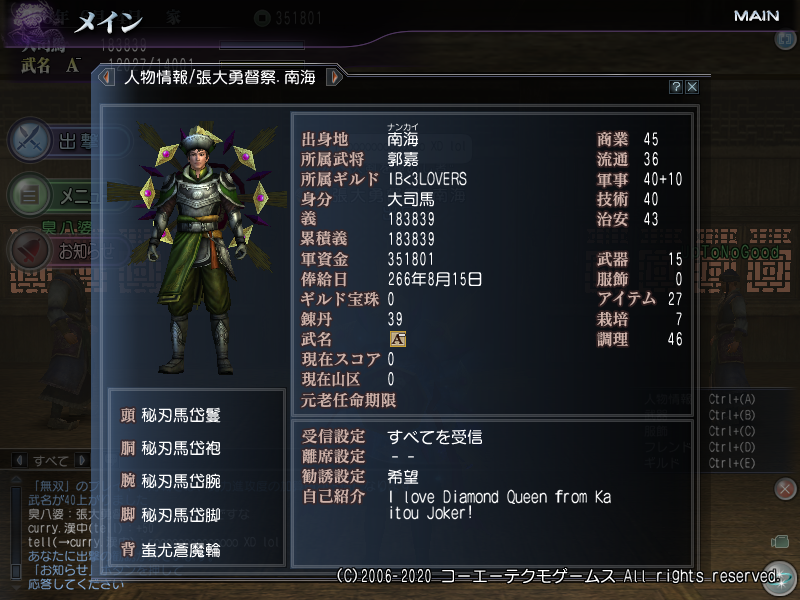 iamYuyaSakaki Mar 6, 11:20 AM
Me Playing Invasion mode in Dynasty Warriors Online game 4 vs. 12, intense lol usually I like to pick fights where I outnumber the enemy.

iamYuyaSakaki Feb 26, 11:51 PM
I worked on the Exodia deck a bit more. MY EXODIA DECK IS THE BEST IN THE WORLD !!!!!!!!!!!!! IT'S THAT GOOD AND IMPROVED !!!!!!!! VERY AGGRESSIVE and could easily build a negation board for back up. I could put in Needlefiber but that's OCG and Ib is banned, so no Needlefiber combo is worth putting in a Steam the Cloak/ O lion or something unless new cards come out Six Samurai United is TOO SLOW, WITH A MAX COUNTER OF 2 IT DOES NOT HELP, (unless I have Kizan I won't get enough counters for Gateway anyways, after summoning Great General, stuck at 2 counters, AND If I do have Kizan, I DON'T NEED THE 2 Counters LOOOOOOOOOOOL, I have Hatsume off Isolde which will make it work) PLUS I don't need the draw, Six Samurai United only wastes the precious Six Sam summons and the counters that could be on Shien's Dojo for example. I put those deck thinning cards that will get me Kageki to easily start my 2 Six Sams on board instead. Even without a counter card, as long as I have a combination of 2 Six Sams and a Kizan/Grandmaster, FTK would work

No need Kizaru, he doesn't do anything, Shien's Squire for the Naturia Beast, cut back on a Shinai. You only need 2 Mizuho and 1 Shinai or 2 Shinai and 1 Mizuho to do the infinite counter, BUT 2 Mizuho 1 Shinai I can also spam infinite destroy so I went with that. Even if it gets D . D crowed I can make Levair and bring it back lol, just more time to restart the combo.

1 Mystic Mine cause Terraforming and ALSO left hand offering searches it lol, can always stall for exodia, if opponent not prepared and you and opponent both a bitch LMFAO

EVERYTHING ELSE LIKE BEFORE, THE CORE PART OF IT IS THE SAME

iamYuyaSakaki Feb 22, 10:02 PM
I BROKE SIX SAMURAIS LOL BETTER THAN ANY NEGATE BOARD THAT COULD BE EVER MADE, NOW THE MOST CONSISTENT BEST EXODIA FTK DECK So simple and easy to use, you basically spam mizuho/shinai infinite counters, then add the right amount of Six Samurais to your hand, Skulldeat back any Exodia pieces, and Calculate. You discard the amount of cards from your hand with Card Destruction equal to the amount remaining in deck so you draw your whole deck and get Exodia in ONE SHOT without decking out lol

3 Left Arm Offering NEEDED, not once/turn LOL which is so useful. It can search either GATEWAY OR CARD DESTRUCTION

I can put another copy of Skulldeat and Great General but the less cards in extra deck to pull this off, the PROER your ARE LOL, and it works just fine :D

IN ACTION, INSANELY AWESOME EXODIA IN ONE FELL SWOOP, THE MOST CONSISTENT BEST FTK EXODIA DECK Replaced Overload with Sandman, since need more Trap negates and using the infinite counter Mizuho and Shinai combo, TEDIOUS BUT I can have infinite counters on Temple of the Six, so don't need to negate opponent's summon since, their monsters will be 0 ATTACK, and no effects from Utopic Zexal, they won't ever get over Dyna LOL, . No need Naturia Beast as Utopic Zexal basically locks all spells out, and everything else !!!!!

Added 1 Shien's Squire, since it can be brought back with Gateway from grave.

Added that perfect Six Sam spell Secret Skills of the Six Samurai so I can remove Saryuja and bring Kizan or Fuma back which I banished with Divine Sword Phoenix Blade so I can make Shien in the extra monster zone. BEST MOVE - Kali Yuga Board WITH OR WITHOUT field spell 30% - rarer board that can't be Super Polyed 80% - even easier without field spell 70% - Relying Metal Snake to trigger Zeroboros banish, one of the last resort moves if nothing better. 50% - if you can't build a board forget it, maybe if you got lightning storm and opponent don't have much either, SHUFFLE UNTIL IT'S SHUFFLED The idea is AGAIN using Golden Stromberg because it plusses so hard and adds a layer of protection in case the Kali Yuga fails (Get Super polyed/kaijued, MST). Also Golden Castle can provide a follow up of offense if necessary for your next turn.

1 Golden Castle/Cinderella = 1 lv. 3 and 1 lv.4, for the other lv.3 and lv.4 would come from Phantom Knight/Danger/Clown and you would make Cherubini (search rank up magic) and Utopia Double/Kaiser. In case you don't have enough, you make Dragun of Red Eyes LMAO fucking scum card loooool In this scumbag Kali Yuga deck, it's ok thanks Konami :)

2 Called by the Grave cause Danger might draw into one lol and online you'd know if they have hand trap right away, plus Glife could work as bait and if you use the field spell people would 99% of the time ash the Field spell special summon effect so you usually can avoid getting interrupted mid Kali Yuga combo (like Cherubini trying to dump Phantom Knight), just having the field spell alone is decent.

3 Lightning Storm for going second, and/or Mystic Mine, 3 Evac for also against Mystic Mine or to bounce monster, Works really with Kali Yuga combo can you can just chain to the rank up magic and bounce their monster back if they summon one before negating the whole board.

THE DECK IS GOLD AND HOW YOU USE IT

Locking the opponent out with Kali Yuga is NOT enough, you have to OTK them the next turn. Once you pull off the Kali Yuga Combo, you end with Cherubini, Utopia Kaiser, Big Eye, the rank up spell face down, and maybe a Golden Castle field spell.

On opponent's turn. chain rank up magic if they use a spell like Allure of Darkness and waste their card, the whole point of Kali Yuga is to not let them play amirite? XD AT EP, KaliYuga blows up all spell and traps. and On your turn, Dragun of Red Eyes (and the burn) + Kali Yuga = GAME OVER There are also several other plays you could make if you can't make Dragun cause some cards were banished by Pot of Desires for example or opponent no monster/weak monster so you can't burn or not enough burn damage

Afterwards If they then normal summon a monster, kills Cherubini and:

If they Set 1 face down backrow, don't blow it up with Kali Yuga in EP, on your turn you can summon Hexe Trude with field (assuming no field or monsters in hand), use Hexe Trude effect to destroy the face down, OTK with Kaiser (on opponent's monster), Kali Yuga, and Hexe Trude. Even if it was a floodgate, Kali Yuga can chain to destroy it, this will only backfire if that one face down trap is Evac ironically or Torrential Tribute, but you still got that field spell AMIRITE? LOL XD Solemn Strike is fine because they solemn Hexe Trude, they down by 1500 LP and most the time Kaiser and Kaliyuga are enough to OTK

If they Set 2 face down backrow, it would firmly depend on my hand. I think it's more valuable if I keep the field spell, so I won't blow up the spell/traps with Kali Yuga in EP. Instead I will summon Hexe Trude first to add to OTK and then blow up all spell/traps with Kali Yuga. In the case that I don't OTK from any interruption, I will try and end with Dragun of Red eyes through Predaplant

If they Set 3 or more face down backrow, I would definitely Kali Yuga blow up all the spell/traps on field at EP, no need to take risks. Generally an opponent is not coming back even if I don't OTK.

If opponent sets a monster/doesn't play a monster, doesn't kill Cherubini and:

If they Set 1 facedown backrow, again I would not use Kali Yuga in EP, but bring out Hexe Trude first, destroy the face down monster (if there is one), Kali yuga can then destroy the spell/trap, lastly make Borrelsword with Cherubini, Kaiser, and Hexe Trude and OTK with Borrelsword and KaliYuga

If they Set 2 facedown backrow, I would honestly see if I can make Dragun of Red Eyes because there are more unknown factors in which I will blow up spells and traps with Kali Yuga in EP. Otherwise I'd take the risk and make Borrelsword Again.

If they Set 3 or more facedown backrow, of course obviously I'd be blowing them up with Kali Yuga in EP. Easy win at that point. 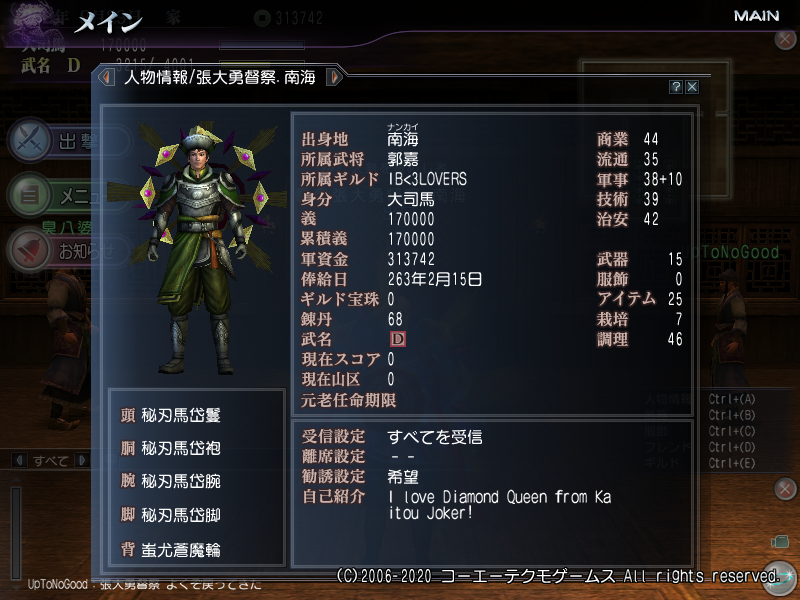