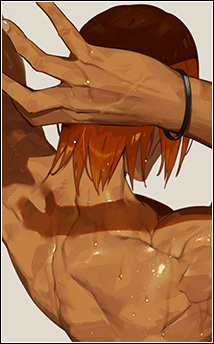 Don't worry about slow replies, I'm always pretty slow
The club was pretty good until we moved to a noisy room that just anyone can walk into. Before we were in a separate room, so we were allowed to watch some series with slightly higher age ratings. I think it was a Netflix thing. I did really like B: The Beginning and it's ED too! I want to give Great Pretender a go. It seems to be a hit or miss series though. There are some things next Season I'm really looking forward too (mainly Golden Kamuy XD). I hope so too
Thank you :D I've had someone else not realise what series that piece is from. It's probably as their outfits here are so different from their usual ones

7kaneki7 Aug 26, 5:48 PM
I wouldn't be able to either XD It probably would be (thinking about it, watching anime like that would be pretty cool, especially 1st person perspective series) I'm not picky on styles either :D There are a few series on my hold list because my old school's anime club started them, but I'm too lazy to finish at the moment XD (also took off some stuff we only saw 1 ep of as I've forgotten what's happened by now). I don't remember which series were Netflix anime, but I know there were a few decent ones (Devilman:Crybaby and Japan Sinks are the only ones I can recall)

7kaneki7 Aug 15, 7:08 AM
I really liked Ajin! I think it was my first CGI series and I ended up watching a lot of other Polygon Pictures series from there >o< It has been a very long time (for Dororo though it was about 50 years, so maybe we'll get one in another 40 years XD) I loved Inuyashiki too, so I'm glad that it did get an anime ^o^
I like to finish everything I have started, so I just kept on watching XD I've seen that the Manga has a high score in comparison, so it does make me want to read it
Probably as Netflix has a hand in it ;-;

7kaneki7 Aug 12, 1:08 PM
I've only been watching Seasonals once they've fully aired XD I do understand why people would rate Japan Sinks low, but I still enjoyed it
Everything about Gantz:O was a feast for the eyes >o< tbh, I quite like a lot of CGI series, but Gantz:O is the most detailed and would love more like it! That does sound pretty strange XD It would be really nice if the Gantz Anime was remade and completed in the Gantz:O style, but I'm not sure what kind of budget that would take
From the newer Gonzo stuff, I've only seen 7 Seeds which was pretty bad ;-;

7kaneki7 Aug 2, 3:18 PM
I love amazing soundtracks, so that really tempts me >O< I'm not usually too much into series with Romance in, but this does sound like it could be good :)
I recently saw Japan Sinks and I personally prefer it (that's probably a bit of an unpopular opinion though XD). I think a lot of people just prefer the Manga for Gantz. It's pretty pricey though so I'm not all that far ;-; I haven't seen the Live Actions yet, but I really like Gantz:O (I ended up rating it a 10 as it was so good)!
There are, so a lot of people, including me, are missing out. I've made a priority list of Anime to watch, and there's a lot of Gonzo stuff on there :D

7kaneki7 Jul 18, 11:27 AM
I still haven't seen Eureka Seven ;-; From everyone I've talked to about it though, they all say that it's pretty good! I haven't really heard much about Kurau Phantom Memory though. Is it worth a watch?
I've been needing to get the Devilman Manga and watch the older series (I feel like I may still prefer Crybaby though). I think Tokyo Sinks is on Netflix now, so when I have spare time, I'll give it a watch :) Personally, I didn't like Tokyo Magnitude 8.0 that much. I think I was expecting more as people always praise it so much!
I wish Manglobe were still around as their series always looked so high quality and I really enjoyed most ;-; Gonzo has a decent amount of good stuff (Like NHK and Gantz). There are so many things by them that I still need to watch! (Stuff like Bokurano, Gankutsuou, Last Exile and Shanri-La) tbh, I used to think Gonzo was kind of bad, but looking through their, there are a lot of amazing series! Maybe it's time for me to have a Gonzo binge >o< I really like Production I.G. Mainly for Psycho Pass though XD

MoonLightGirll Jul 8, 5:07 AM
Thank you so much :3
Also your profile photo is really cool. I liked it!

7kaneki7 Jul 3, 7:46 PM
I do quite like Bones too! My favourite Series from Bones would be Carole & Tuesday. MAPPA is defintely one of my tops! I have so many favourites from them >o< I do agree with you on Geno that the animation needs a bit of work. I've really enjoyed all their stuff though and they are one of the Studios that I try to watch everything they release! I'm super hyped for Season 3 of Golden Kamuy as it's one of my favourite series!
Some other studios I really like are Science Saru, Polygon Pictures and Studio 4°C (all 3 generally use very unique art/styles). These ones are a bit more popular, but I also like Wit Studio, Shaft, Manglobe and Kyoto Animation!

It kind of is XD Just a load of Reptiles though! Bearded Dragons are pretty cool! The snakes are gorgeous >O< My cat is very pretty (super fluffy too ^-^)

QuantumVoid Jul 3, 8:44 AM
Nana's pretty good so far, quite a suprise for me since i don't really watch many Shoujo/Josei anime.
I actually just watched the first episode of Shinsekai Yori funnily enough, i can't really say much from the first episode alone but it looks super intruging and fits my tastes quite well.

MoonLightGirll Jul 3, 8:38 AM
Hi!! And thanks for accepting my friend request. Nice to meet you :) 💜

QuantumVoid Jul 3, 8:00 AM
Thank you :D, yeah it's Johan, no need to be embarrassed Lmao
You also have great favs, i gotta watch Shinsekai Yori at some stage tho :s

7kaneki7 Jul 1, 12:09 PM
I don't mind long conversations at all, I think they're really fun :)
You have amazing taste too for liking Madhouse >o< Are there any other Studios you really like?

I have a cat (not sure on her breed as she was found a stray), but I really want to get a Scottish Fold now XD
I have too many pets to look after ;-; (2 Snakes and 2 Bearded Dragons. When my sibling goes to Uni, I'll have to look after 4 more Snakes)!
I searched up Nacho Flay and (if it's the big ginger cat), they look quite a bit like my cat (mine is a more Tabby and White colour though)

I agree that Madhouse has amazing music! (My Fave Studio). As TG was one of my very first series, I don't think I really minded about much to start it XD I really like Uta too! The Manga does look much nicer than the Anime (Ishida's Art improvement too is so good >o<). For FALILV, I would just listen to the ones with MV's for ages. They did recently upload all their music on YT though, so I hoping to listen to that soon :)

That's one of my top PTP Songs, so I have to hear the cover!
I kind of have an obsession with Monika, Katsuma's Cat (The Drummer for Coldrain) XD