DonStep 6 hours ago
Because you are ^^ do you have good H to recommend me?

Seems your H-Anime List is still standing strong... Perhaps stronger than I last checked it out (2 Years ago). :3

I see what you mean, but I'm not gonna go through all the posts again

It'd be possible to do with Imgur albums, too, but I'm not gonna create hundreds of albums just for this, either

Serhiyko Jan 6, 10:47 AM
I thought you liked long posts
Regarding one screenshot rule, what about gifs? Would it still be considered a one screenshot? How are multiple screenshots essentially different from a single gif that has multiple shots in it? It takes too much space? Not if hidden under the spoiler. Their argument for using only one screenshot is that it eats bandwidth (even if hidden under a spoiler), but firstly – while the sigs have the size limit, there are no such limitations for posts (and a single gif may take much more space than ten screenshots, I'd imagine), and secondly – what is this, 2000? We live in 2020 already. This bandwidth argument is ridiculous

I have all of the screenshots on my HDD, but I don't keep them separated between the ones I've used in my posts and any other random screenshots

I know, but it still doesn't return 100% of the posts
I have all of my images posted on Imgur, so now that I think about it, it wouldn't be that much of a problem to find all of the posts based on the pics (Imgur shows the original filename to the one who uploaded it if you view it from the album). Oh and I've remembered this just now: I've actually saved links of all of my watched topics before unwatching them :D
But I feel like that's not that necessary, because chances are - Imgur may die sooner or later, anyway (or MAL for that matter). Just think about it, there were countless (even extremely popular) sites that just went into nonexistence. I already had to move to another image hosting service three times – you probably never heard about first one, but you must know Imageshack and Photobucket. Technically, they are still around, but you can't use them for free any more. Plus, Photobucket started deleting some of my screenshots without even notifying me, so I've switched way before they limited their bandwidth, but what I've liked about Photobucket more was that their links had the original filename in its links, contrary to Imgur. Plus I am not happy about changes in Imgur, which basically just removes features, what I don't understand. In what way removing a functionality is an improvement?
There was also a forum and tracker that had thousands active users visiting it everyday. It's also gone now
There was a hosting service that had almost every game in existence, and a hosting service with an immense variety of all kinds of files, including almost every show you could think of. Both gone now, and so on
Chances are, Imgur, too, will cease to exist or more likely - become premium. That's why I try to make sure to explain in words what is wrong in the scene, even if it's already obvious from the pics - I know that one day they may be gone
I am sure you can think of similar sites that were so huge it was hard to imagine them not be around any more. Even MAL was not working for few months, and it wasn't the end of the world. One day I think it will go down again, but for good
Of course I shall be glad if nothing of this happens

I don't particularly want to search for another place, because overall I like MAL's episode discussion threads, even if people just throw in their thoughts without bothering to read any other posts or even attempt to actually discuss anything (but that's a universal thing I believe, and I'm sure any other site would be no different), but it's fine
So it's probably not worth it to waste time on the old posts (also lazy). If mods get to them, then maybe I'll do something about them, but for now I'll leave them as is. I'll formally apply to the rules from now on though, but not because I agree with rules or am afraid, but because as I said before – I think it looks fine this way, too. But maybe I'll change my mind if the case demands it 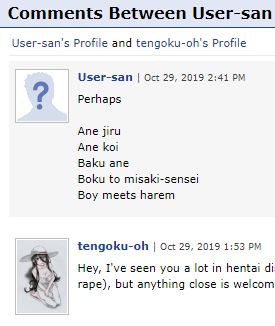 Serhiyko Jan 2, 2:25 PM
There was a duplicate post and I decided to report it, because I kinda don't like those things. In the hindsight it was a terrible decision, because the majority of the times I report a post that is not an obvious spambot, mods have a tendency to screw everything up. It wasn't just once or twice or thrice or four times but much more, and I think there would have been even more cases if I didn't decide to stop reporting any violations just so some shit doesn't happen again
But it has been years since the last time I reported anything (beside maybe spambots or sigs), and I thought "hey it's so simple, it's just a duplicate post what can possibly go wrong again, all they have to do is just to remove one of those duplicate posts"
I was wrong
They also removed his quote of my post, and my post as well (without any mention about it)
Thankfully I was able to find it in the Google cache, so no big deal - I just edited it back into my next post
But then I get a message saying that I violated two rules - by embedding NSFW pics and posting multiple screenshots - which are both true, and I knew it, but no one seemed to care until now
This time the other mod did a better job though, because he just edited my post without removing it, and I must say I kinda liked it this way (with some modifications though), too. It never crossed my mind to just post links instead of pics, plus it was more vivid when embedded
This is also surprising a bit - I understand the first time my post was removed, I kinda brought it up upon myself by bringing mod's attention to the violating post, but I am not entirely sure why they came back to this topic again after closing the issue. So I think either one of the two happened: someone reported my post, or the other mod decided to check the first mod's job for whatever reason...
My guess is this: Collins89 (the user who double-, or actually triple-posted) probably received some kind of message from mod, too; he also may have noticed a notification that I quoted him - and it was also the same edited post with pics that I mentioned before. So maybe he felt offended or smth, and decided he has a need to report it. It can of course technically be any other user, but it would be a hell of a coincidence, two random people reporting same topic
In any case, as you know, I have multiple other posts with same kind of thing, so I wonder if I should edit them all in the similar manner (seeing as I don't particularly dislike it this way). Because, anyone can report those posts at any time. And if the worst that could happen was the post being edited just like the second mod did, I wouldn't worry much, but chances are, my posts will probably just be removed on sight - even if there are some additional discussions in them. I may also get banned, but I am not afraid of it that much, - I am more worried about my posts being kept intact
But while I can find and edit all my posts with NSFW pics, because I have all of them in my Watched topics - there is also the second violation, it being multiple screenshots in same post, and there are quite a few like that in regular anime episode discussion threads, too, and I'd get hard time finding all of them, because unfortunately, I've unwatched most of them just recently, because I felt like there is no need for me to keep following them, now that there is a notification system in case someone decides to quote or address me personally
On the other hand, I wouldn't be the only one who'd have a hard time finding my old posts, because thanks to MAL's forum search that's been broken ever since its creation - mods would have a hard time, too
That is in the case they will decide there is a need to correct all of my past posts, which I doubt they will (they didn't this time at least - I randomly checked few of my past posts, and they seem to be fine, so it was probably just a one-time thing)
But the chance of someone just randomly reporting any of my posts in the future, and it being deleted without sending me a copy or even notifying me, - still remains. So should I bother with editing all of my past posts, or just NSFW ones, or just not bother and hope for the better? Please advice
btw, I've read the rules and I didn't find there any mention about publicly discussing mods or their work, it just says to not post their PMs (which I am not) and not to harass them (which I do not, either). So I am not breaking any rules this time, at least

Serhiyko Jan 16, 2019 8:05 AM
Okay, thanks. I didn't get as far back as 1998, and my pace has gotten really slow lately, too, since the older the titles, the harder it is to watch. Futa-bu series were also among the very few recent titles I omitted, since I really am not interested in the futa stuff
As you could also possibly see, I only started keeping track in 2015, so it's possible I missed some titles I watched before that
Technically, I could go through all the hentai titles at AniDB and check if they have OP/ED specified (named themes are usually vocal), but somehow I am just too lazy for that; plus, not all themes were added to the DB. So, I'd have to manually check the video of every title (and every episode preferably) to have a definitive list, but lazy for that as well

ShonenLove Dec 21, 2018 5:59 PM
Thank you for your comment in Inyouchuu Etsu Special discussion. "Delicious bodies being violated all over the place" made me giggle, haha.
All Comments