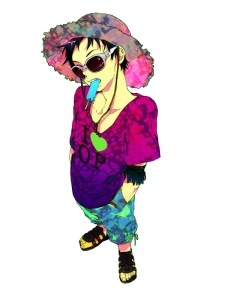 AND WOW, SO FAST, we respond so fast to each other :D Like... 4 days both of us took.... and they say Unicorns are supposed to be fast ;~; At least I have an excuse because #3PiecesOfShit what is your excuse, HUH?!

YOU ARE KEEPING UP WITH ONE PIECE ANIMU? NAICU! What about One Piece manga?! :D Also, thoughts on, IDK, WHOLE CAKE ISLAND AND KATAKURI AND BIG MOM AND PEDRO AND LUFFY AND SANJI AND SANJI VS. LUFFY AND MANY OTHER THINGS?! :D

Ah, Zombieland Saga :3 I plan on watching that... eventually. Watch Bunny Girl Senpai too, apparently that shiz is real good! As for JoJo, I'm caught up to part 4 and will watch p5 when it finishes :D I love binging my action stuff :3

EW..... YOU SHIFTED TO THE K-SIDE... NANDE?! ;___; That makes me sad, but as long as you are having fun I guess. I watched a kdrama once too, called Fight For My Way and I like Kim So Hyun actress, she from Ghost Stories, I think. She is nice. I want to watch W2World or something, the webtoon (your new favs... >__>) to real world one, have you seen? :O

And yup! Still on AA, though barely active. You got discord or skype or kik or something? I'm waaaay more active there than on AA :D

stickermans50 Dec 14, 2018 8:05 PM
Wow U Unicorn... that sucks ass, can you like, idk, RESPOND FASTER NEXT TIME?! But it's good you're still keeping up with anime slightly-ish :3 as for me, I finished College #WOOHOO I was supposed to take my uni this year but me and my parents have decided to let this worthless being take a gap year :D So I'ma chill and stuff

Yup, My fav race is Minks in OP now. They are awesome! Garchu~

IKR? Marco for za win! Though I really want to see all of the old characters again, like Kuma and Ivankov, Ugh I'm just waiting for the final arc and am waiting to see all za characters in action again. Like seriously, Kizaru's trolling is sugoi dugoi. Mhm mhm ;-;

Lol yeah, Brook and the others fell asleep anyway. Yohohohoho -__-

As for Kaidou, I'm neutral about the guy as well but I do dislike how peeps keep saying him > Shanks. LIEK, WTF?! NO ONE CAN BEAT SHANKS, HE IS THE STRONGEST. SENPAI. SHANKS > KAIDOU, RIGHTO?! RIGHT DESU?! Our kouhaienpai-relationship depends on your answer O____O

Lol agreed, Zoro and Law's reactions were kewl af but I really wanted to see ma boi Sanji's reaction to ninja-stuff too ;-; too bad.

INDEED! I WANT STRAWHATS AS WELL AS THE REVOLUTIONARY ARMY, BOTH TO END UP THERE. SO LUFFY AND DRAGON CAN MEET TOO. It'd be sooo kewl!

That's Oda for ya, he always deceives - specially in Sanji's cases. Like the whole poster thingy.

Carrot is one of my fav chars of the new world :) and dw, I don't know what Garchu means either :(

New World stuff I assume, we'll learn later. As for Jinbei being in big mom's group, I wasn't too surprised tbh. I mean, Fishman Island was under her protection so I expected some other connection too.

I want that pairing to be true too tbh.

PLS CATCH UP! SHIT JUST WENT DOWN! PLS. Jokes, thank you for at least finishing up Zou arc >__>

Ehhhh, I think Oda's the same as before. It's just the stakes and the overall structure of the arc that's better IMO. In Dressrosa Luffy had to gain an entire fleet so the 100 chapters and the shit pacing was a given (even if some of it could be trimmed). Mhm mhm. But ye, One Piece has gotten a lot better! :D

Unicorns have a mind desu? Nani? I thought their mind was in their heart...

Zou starts at 801 or something. And it's been a year and half since Zou. Yeah, that much for sure. Zou arc is the best OP arc.. Well, in a way at least. You'll love it Neo-senpai :')

EXACTLY! That's the point I've been trying to make, you are so slow. geeeeeez... Seriously, believe me, that is what I meant.... Mhm.....

stickermans50 Jun 12, 2016 3:55 PM
Yeeeeeeeeeee! I can't spoil EXACTLY what has happened so far, nor can we properly discuss but shit goes down. Before Big Mom arc (current arc) we have a sweet 20 chapter-ish long Zou arc which is probably objectively the best OP arc in the new world. Sooooo much info senpai! Nah, Ace won't come back. I hope so at least ;-;
All Comments