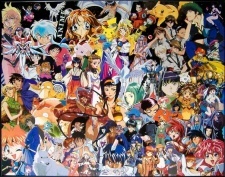 stonnyfor Jun 30, 2011 4:24 AM
Hey how you been
Im not much of a manga reader so thats why I stick with the anime One Piece version and I really like the voice actors. Every main character has a distinct voice and I like that. If they ever stop the anime before the manga I will probally finsih the story with the manga.
On my ratings I do rate alot higher than I should but If I enjoy an anime and keep wanting to watch episode after episode that usally gets a ten from me. I try not to knit pick on the little flaws and on bad or good endings.
Hey I was also wondering if I could get a larger version of your profile pic. It looks like it has some anime charcters I havn't seen before and some I have.

stonnyfor Jun 13, 2011 7:47 PM
Hey Im defenitly going to check out your list. I see that on the anime you share me and you like alot of the same stuff. Do You also watch One Piece? You Gave Ninja Scroll a 10 im glad because When I first watch that movie I didn't know what to expect since it was kind of old when I watched it but It was aewsome. I plan on rewatching it before I watch the series now I just got to remember if I watched the dub or sub lol.

stonnyfor Nov 4, 2010 3:24 PM
hey nice reccomendation with princess mononoke and windaria I think you were spot on about how both movies have charcters with flaws