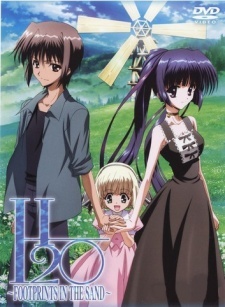 SadisticDoc Apr 6, 2013 1:26 AM
sup, i noticed you were also a heavy hakusho fan like me. I've been trying to deconstruct exactly why it becomes amazing right at the sensui arc, maybe you share my thoughts on that? Everybody is looking at 1 arc in the anime and saying its a 'tournament fighting anime', the fact that it didnt overstay its welcome might be the reason the sensui arc was so amazing..

~those are my thoughts at least

Tkavatar Dec 5, 2012 10:13 PM
Hi I know you don't know me but I just did my first review. It is about an anime called Durarara. If you could just give me some constructive criticism and rate it as being useful or not useful I would be extremely appreciative. Ps: I could use a couple of friends on here because I don't have any yet. If you don't mind I would like to add you. Just let me know please.

Ligaea Aug 11, 2012 1:38 AM
I read your review on Medabots. Great review, only you're wrong about one thing. All 52 episodes did air. I remember watching religiously every saturday on abc family as a kid. I distinctly remember seeing the ending.

I didn't read your FMA review, but the fact that it's making so many people so butthurt is the greatest thing ever.

So for that, I thank you.

Not gonna type a story since you've seemingly already managed to make some new friends via your review, but you were pretty much bang-on with everything you typed. Our scores aren't the same but it's always nice to go on MAL and see some long-winded person NOT go 10-10-10-10-10-10.

I typed "pretty much" 'cause I don't know what you were on about at the start of your essay. You complained about Ed pulling out his clock/cock (would've made a great typo, no?) constantly and there being too much exposition. I find this most odd when the movie I watched started with next to no get-newbies-up-to-date chatter and non-stop action--culminating in the lengthy train/prison break bit. Ed didn't even appear until like 5-10 mins into the movie!

Complaining for the sake of complaining won't earn your e-friendship. I advise you to re-watch the first 20-30 minutes, then moan anew.

And yeah: Mustang blowing shit up and Armstrong smashing shit apart would've made it a far better filler flick. And either MustangxHughes war-time or Xing exploration -> C&Ping Ishbal.

TotallyLovable Feb 16, 2012 11:51 AM
I just wanted to express my utter disgust because of one of your previews. You seriously lack good taste and understanding of anime.
If I offended you, that's fine; if I didn't, that's fine as well. I just wanted to express this feeling of irritation to its source.
There is really no need to reply, so please, don't bother. Have a nice day.

AmberFebruary Feb 15, 2012 4:47 AM
talking to you really wont get anywhere since you're confined to "i am a viewer w/c must be pleased criticizing your work for not satisfying my desires" pov

this,
"TSSOM is not "worldly" bad as how you see it, even for someone like me, a hardcore FMA fanboy who have come to love it"

is basically my reply to your review's,
"Unfortunately, I honestly cannot recommend this film to anyone, not even FMA fans."

your reasoning about the characters is coming from "the disappointed perspective cause i didn't get to see him, her, the gang in action, and the like of Mustang's flames", spouting "I would use the fantastic cast it has already established more"
can be routed to as simple as because i didn't get my whole bunch of fantastic characters in action in this movie, that's it
and "Hughes could've just as easily directed a group of soldiers as Roy did" basically just won't happen cause his dead (salute)
i actually would find myself disappointed if they lessen out the screen time of our main leads Ed and Al w/c they didn't and use a lot of screen time to explore the other aspects of the movie, Milos, the citizens, the Crichton siblings, you have your movie leads and the movie plot to give attention to than "the already established characters" you've seen for 64 straight episodes
and the story happened where? it isn't in Central, it isn't in the East HQ, it basically is in the border between two fighting Nations, and have you seen the whole gang when Ed and Al went to Briggs? no, the movie actually disregarded this so called "character fanservice" for the sake of focusing on the movie itself and its characters

and why did i compare Julia to Ghibli's heroines? because she's the same kind of heroine who do something for what she fights for, unlike a bunch of ridiculous heroines fed to us by the industry
she have gotten her hands to stone she's been searching for ages to help her people, its in the "logical reason" why she would swallow it, use it, not your so called "because the plot requires it"
this isn't Code Geass or even that awful Guilty Crown

and overall, a good story, or a good filler movie ain't need to be unique, even a simple one, w/c holds "reason" & well delivered is enough to make a mark in the franchise, and this movie has you're so called FMA-ness w/ its spirit and morality, especially the last set of scenes and Mustang's notable line, and it also ties well w/ Brotherhood w/o contributing anything that is inapplicable to the established main plot
so i really don't get what an FMA fan like you is referring to w/ "FMA-ness" unless you're fanboy desires like "i want it to be as unique as the series, i want the whole Mustang gang in it" is just itching to be served

to sum it up, this is a very good movie, nothing outstanding, but i love it

and goodluck finding your FMA justice in this degrading state of anime industry cause for me, no matter what FMA delivers as long as didn't go astray to ideals the series established, its enough to put other shounen series and movies to shame and be a highlight to my anime watching career

oh, and shounen leads powering up by just by screaming and friends getting hurt against a logically more powerful opponent is one perfect example of "because the plot requires it"

anyway, goodbye, nice talking to you ^^,

AmberFebruary Feb 14, 2012 8:04 AM
the way you pointed out the writer for the FMA movie is definitely uncalled for unless you're some hardcore script writer who have a lot to boast
criticizing like is a wrong move to include to your reviews, especially if you haven't got the skill to make one yourself, you may point out the script as a whole, but not specifically the person behind it, and scripts ain't finalize by a single person anyway

and Japanese people don't buy what they don't like, that's how simple their marketing system works, and basically FMA TSSOM sold 13000 copies of BD in just one week

and basically its a movie you can only recommend to FMA fans, those that have read the manga or watched Brotherhood
it isn't made to outshine anything, it is simple to begin with, remaining true and faithful to FMA's theme and spirit

and Conqueror of Shamballa is basically logically better than this cause its meant to be a sequel to the first FMA series, it basically is a movie w/ major connections to the plot, unlike TSSOM w/c made a point to be a filler story to begin with

and why they didn't touch those possible roots of a filler story you've mentioned? cause Arakawa is the only one who can do so, she's the only one who truly knows what happened, what will happen, etc. to them
and they "respect" her for not touching them

oh, and Julia is an awesome movie heroine, if you have seen Ghibli movies, you'll clearly be reminded her of those

TSSOM is not "worldly" bad as how you see it, even for someone like me, a hardcore FMA fanboy who have come to love it, especially its animation (fluid, unique and classy) and music (epic OST) as well as its solid cast of characters
i'm also not disappointed cause i ain't expecting anything groundbreaking from it to begin with, and instead of just being pleased w/ it, i came to adore it ^^,

i may be a blind fanboy for some and maybe for you, but that won't change the fact that FMA: TSSOM have a lot of good points than bad, and one great example of how you make a filler movie that shows great respect to its original material
All Comments