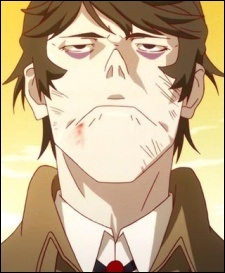 MisaoFan Mar 13, 2014 6:31 AM
I wonder what's lacking something fundamental in it? I thought the show contains a lot of elements necessary to make it a respectacle action anime, though the lack of popularity deceives me.

The first dozen of episodes suffered a slow pacing in my opinion and takes a lot of time to develop the character and the setting, which is reasonable from what you have seen (but then I don't have a lot of interest towards the show until around episode 13 and it's two-cour). You could trust me if you want, but it gets a lot better halfway and even if it feels flawed, the way it executes the story was decently well-balanced and the characterization becomes impressive for some characters, but not without a couple of icky moments. Give the show a couple more episodes (reaching up to 14 was ideal for me personally) if you have free time and when your thoughts haven't changed as it was before, leave it to the dropping bin.

MisaoFan Mar 13, 2014 3:29 AM
Hello! I heard you did drop Tokyo Ravens early on (it was episode 7 from what I saw on you list while searching) so what's the reason behind dropping it? I enjoyed it while realizing I look forward every week and gets better overtime, though I'm kinda curious to see on how you drop it.

kitten320 Apr 4, 2012 5:43 PM
Thanks for your input, will try to look up the manga later =)
Though can't say I liked Arcueid that much... The ones I'm most interested in are Ciel and Akiha. Really hope that Akiha doesn't have a mega brother complex with incest indications though.

Are their personalities and powers more explored in the game?

Pocarisweat Mar 22, 2012 8:49 AM
Oh hater haak had a mal too. Wait, you're already on my friends list. Derp. Anyways time to bash ur scores on mal list. You should do the same!

Archon_Wing Jan 16, 2012 3:20 AM
XD I ended up finishing Zeta Gundam a while back-- shit's amazing and I absolutely love the music :P But I'm kinda worried that Reckoner and I have to delve through ZZ to get to Char's CounterAttack. >.> It doesn't look very promising atm.

What did you think of Unicorn OVA 4/Age as of late?

And finally, what's up for this winter?

Archon_Wing Nov 7, 2011 12:29 PM
So Horizon is worth watching? I guess that encourages me to check it out. Your top 3 seems to coincide with mine.

Hmm, Rider's simply popular because of his looks and attitude, plus the Waver comedy duo. He is kinda shallow I guess; not gonna make my favorites list any time soon, but he is fun to watch.

And yea, Chihayafuru rocks, though sometimes the melodrama gets a bit too over the top.
All Comments