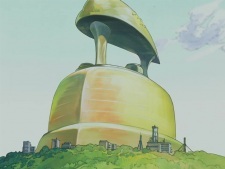 3 piece art-house anthologies backed by a tour-de-force of creative talent. No reason to dislike one if you liked the other.

Short works by Gainax studio filled with technically impressive animation, creative direction and designs. Both series contain fantastic music and pop-culture references and allusions that indicate personal labors of love by the directors during a period of innovative freedom that we may never see replicated again.

Chainsaw Man and Tokyo Ghoul run thematically parallel in many ways exploring primitive survival, social outcasts and dehumanising organisations. While the main characters Denji and Kaneki share a similar backstories, Denji's manages to be more tragic but at the same time less pitiful. Characters in Chainsaw Man are decently fleshed out though not as thoroughly characterised as those in Tokyo Ghoul, and the humour is significantly more vulgar and absurd. Where Chainsaw Man stakes its claim over Tokyo Ghoul would be the lack of melodrama hammering home of tragedy that often renders Tokyo Ghoul tiresome and replaces it with adrenaline.