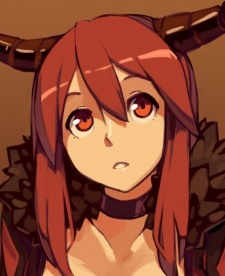 ZephSilver Sep 21, 2015 10:27 PM
I was never impressed by it, maybe it I saw it when I was a younger maybe but Drrr is always been "meh" to me. And I'm never excited for sequels because for the most part they always come out inferior to the 1st.
Yea the system was flawed before but now no one cares. I mean just look at the amount of people that even bother to mark anything helpful now. People simply stopped caring about reviews. Now top 4 reviews for new shows can only have 11 helpful simply because no one is motivated to go through all the silly reviews being released now and no one cares anymore.
I understand that sentiment regarding Rokka, if they don't make a sequel my score would drop but I'm hoping they do since it's the best fantasy adventure since Bahamut or me.

ZephSilver Sep 21, 2015 1:05 PM
Glad you still somewhat like the review but really what is there left to see? A cliffhanger ending? Because we both know that's all Drrr is good for at this point.
I'm inclined to disagree, I've always thought Drrr was mediocre even from the very 1st season. I have yet to give any of it an above average score since it does nothing with it's unique storytelling but waste time. Baccano does the same thing but wraps it all up and had an endearing cast, Drrr's cast is far from engaging and the pacing is horrid. So to me Drrr will always be the poor man's Baccano and that hasn't changed 40+ episodes later. I mean How does a show go on for 40+ episodes and barely flesh out any of the main characters? It's no better than a perpetual battle shounen at this point, which is sad.
The numbers thing don't bother me about the system, it's the fact that new reviews that garner enough attention can't be featured anymore since it only judges the amount of helpful. Before new reviews that had a few helpfuls had a chance at the top before they are downvoted to hell, but now all the older fanboy reviews will forever be on top which is forcing people to rush and make shitty reviews. I mean just look at the review feed, it's filled to the brim with poor excuses for reviews and since you can't downvote these people can run rampage doing it with no backlash.
Rokka's approach to the red herring setup was good to me but I think it's the character dynamics that sold it for me and not so much the mystery. The way they played off eachother felt really organic, and the dialogue reflect a high pedigree of writing. Just well grounded. And yes the ending was obviously gonna be sequel bait, I mean there was no way they were gonna wrap up the fae story and defeat the demon king in only a few episodes. I'm glad it took it's time and didn't rush things, that way the events had impact. So far Rokka is the 2nd show all year that I gave a 7, Jojo being the 1st. Of course of no sequel is announce it'll drop to a 6 but right now it's an anime that respects itself and therefore gives me a reason to care.

ZephSilver Sep 21, 2015 7:29 AM
I've seen more than enough titles to know that this season of Drrr will continue to do what the others did. Dick around for 9 episodes and only have 3 episodes (1st, middle and the last) be the only relevant one. The show is dragging out a plot simply because they know there's a dedicated fanbase behind it that will pay for it regardless of it's quality. We both know all they're gonna do is end things on a cliffhanger and just move into the new season quickly resolving the problem (just like they did with Izaya getting stabbed only to be fine the next season). And as far as writing for a show that's still airing MALs new broken reviewing system is making that the only way that reviews get seen now since it's impossible to get your reviewed seen for older shows alot of people are forced to review airing ones. Besides I saw 3/4 of the show before I wrote that review 9/12 episodes is a solid number to give an assessment with. You're acting like the quality will magically shoot up after the last 3 episodes. If the show is mediocre and the last ep turned out to be "good" that doesn't automatically make the whole show "good" now. Rule of numbers would say the show only had 1 or 2 "good" episodes out of 12, so waiting 3 episodes (or in this case the last one) wouldn't change that fact. And if I wanted to I can simply edit and update the review (like I've done countless of times before). Thanks for the comment but I hope you understand where I'm coming from.

esKooZ Sep 7, 2014 10:26 AM
I too have been busy with school. I started classes last week, and I have an annoying commute (taking classes at a shitty but very affordable community college). I also still work basically full time. Good news is I have an internship in the city on Tuesday for this start-up anime social media company and needless to say I am ecstatic. Hopefully I get the job so my schedule will be more lenient : )

esKooZ Aug 15, 2014 11:23 PM
I feel the same with both of those shows. Recently, I haven't been able to get into anime. I don't know if I'm "growing out of it" or if my standards are too high, or if nostalgia is clouding my vision and making me think shows that I watched years ago (Haruhi, Toradora, etc), are better than they actually are................. but everything I try to watch seems like shit. Filled with so many cliches that I laugh out loud or cringe and cannot get past one episode.

esKooZ Aug 12, 2014 7:38 PM
For some reason, I can't finish golden time. It causes me physical pain to watch. The art bothers me. The protagonist I think is really shitty and his whole "amnesia" thing is pretty lame. The crazy bitch, (forget her name, Yui Horie voices her though), is like, one of THE worst female protagonists I've ever seen in anime. And the way it's thrown in your face that they're clearly going to end up together makes it uninteresting to watch.

I haven't really seen any anime recently that has interested me much, and plus I've had a lot of work and other IRL obligations filling my time so it's just... bleh. Glad to hear you enjoy my shitty videos. :^ )

esKooZ Aug 10, 2014 4:38 PM
I haven't updated MAL in a while, buttttttttttttttttttt I actually started it the day you commented on this, (not because you commented, I don't check MAL that often anymore... just a coincidence), and finished it a few weeks afterwards. I enjoyed it a lot, I just thought the ending was absolutely terrible.

Also, pls don't be tsundere, it's 2kawaii4me
All Comments