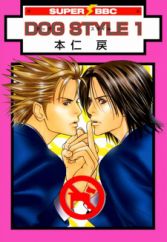 Miki Terayama saved Teru from getting roughed up by some punks. They're both in love with other guys, but one thing leads to another, and they're fooling around. Teru acts like a stray dog that hasn't been fed in ten days. He consumes Miki's love quick and rough, and that can be quite a pain in the butt! (Source: SuBLime) 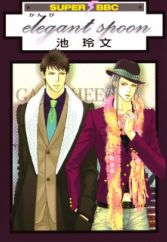 Borrowing Yoshiaki's words, 'pretentious hippy' describes Kasumi. Inseparable since their school days, Kasumi is an independent and super sexy freeloader that comes and goes from Yoshiaki's room...and his bed..Not only that, there's more to Kasumi than meets the eye... (Source: Nakama) 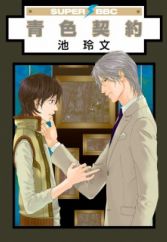 Love starts with a burglary when art owner, Andou, has a young artist's, Kagawa Setsuyou's, masterpiece stolen from under his wing. However, he finds himself having to deal with Setsuyou's artistic whims (laugh). Setting deep in the woods, alone together in an ancient gallery... the optimal environment to enjoy Ike's artistic prowess and watch sex scenes quietly from the front row. (Source: Nakama)

Yagisawa is an editor in a publicing company, having a romance with his already married boss. But then one day he is assigned to work with a writter called Izukami Kyouichi. But why does he know about Yagisawa's sexual preferences and what is his connection to Yagisawa's school days? This book show us the story of Haruya's editor from Te wo Tsunaide, Sora wo. (From Wasurenagusa)

Te wo Tsunaide, Sora wo

Te wo Tsunaide, Sora wo

Haruya, a frustrated writer for a magazine, is constantly puzzling his editors with his lack of motivation. His quiet, solitary life is spent in a house away from the city. However his outlook changes drastically when he sees a shy, troubled young man undressing on the beach. Their lives become intertwined in unforeseen ways. A passionate and unusual relationship develops that will ultimately be beneficial for the both of them. (Source: SuBLime) 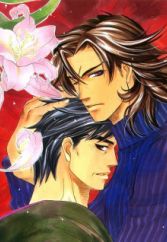 The handsome17-year-old, Norito, who seems to bring bad luck to anyone to comes close to him, encounters Tengu Koma in form of a middle-aged man, Tengu Koma has been searching for the reincarnation of a lover from long ago. Now that he has arrived, Koma does his best to protect his younger human lover against the dark forces that seem to haunt him. However, several other powerful youkai, among them Koma's brothers, also become aware of Norita's presence, and one-by-one begin to arrive as his doorstep. [MAL] 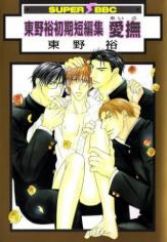 A collection of short stories by Yuu Higashino. 1) A Beast's Pure Love College student Takafumi is kidnapped by mob boss Kidou. Takafumi is imprisoned on Kidou's estate, and is tied up and sexually harassed every day. Will he ever escape? 2) A Confused Heart Spoiled rich boy Tsubaki is used to getting anything he wants—but has he met his match in Sonoda, the new professor? 3) You shouldn't just wait 4) Heavenly Entrapment 5) A Tyrant's Love 6) A Tyrant's Lover 7) A Clumsy, Side 1: President of the Student Council 8) A Clumsy, Side 2: Princess Epilogue

Tsubasa and Eiji have been dating for over 2 years, but their bedroom action hasn't progressed far. Eiji, a man in his 30s who has needs that aren't being met, has been using a substitute, waiting for the day when Tsubasa wants to go all the way. Tsubasa, being younger, fears that his inexperience will turn Eiji away. Can these two come to an agreement in the bedroom? And why is Tsubasa in the living room naked with cat ears? (Source: MU)

Seifuku no Tame no Love Song 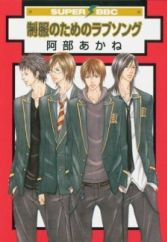 Seifuku no Tame no Love Song

Vocalist Shori and guitarist Nozomu are engulfed in a passionate love affair when they should be studying for their college entrance exams. And arrogant bassist Ai is going to America alone? Even worse, drummer Yumeji seems to be involved in a mysterious incident. Looks like the day when the band members take off their school uniforms and go their separate ways is quickly approaching. The band might be breaking up as reality intrudes on their simply school lifestyle, but you can bet that these guys are going out on a blaze of glory. (Source: June Manga) 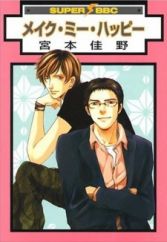 A collection of short stories. Chapter 1, 2, & 3 - Shiba owns a small software firm. Naomi, who works there part-time as he studies at the university, is comfortable with his homosexuality. So, despite Shiba's being 36 years old, Naomi can't help but be attracted to his boss! But, does Shiba feel the same way? Chapter 4: Flower Maze – Hino-san, a disillusioned salaryman, ends his relationship with his male lover to give in to the 'safe' choices of an overseas transfer and arranged marriage. Takashi, a would-be jewelry designer, fights to reclaim their relationship, unwilling to let Hino-san go. Chapter 5 Sleepless & 6 Breathless - After turning 20, Hiroyuki discovers that he has an older step brother, Akira. When Hiroyuki begins to feel attracted to Akira, he isn't sure what to do. What will it take for Hiroyuki to win the affections of his straight and clueless step brother? Chapter 7 Snow Tale - When Hiromu picks up Kouta half frozen in the snow, he never thought it'd lead to a relationship. When a crazy ex-boyfriend shows up, ready to attack, what will happen to the new couple? (Source: Liquid Passion) 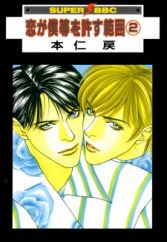 A story about two men that have been best friends for years, knowing the fact that they have feelings for each other, and ignoring it. They discovered it on their college days and settled the matter with a time limit; if they hold the same desire years later they will do something about it. Now both of them have girlfriends, but it seems that their desires only grew stronger, in spite of loving their women. So, what happens when their girlfriends agree to make them indulge in their desires?, and have a relationship only between the limits that desire allows them... This is a bet, to know what is stronger, love or desire? (Source: Queen2408) 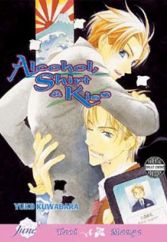 Crushed beneath the weight of lost love, Naru hopes to mend his broken heart by drinking his nights away with fellow detective Kita. The morning after their third night of drinking… they wake up naked? The cute but rough and wicked couple has arrived! (Source: DMP) 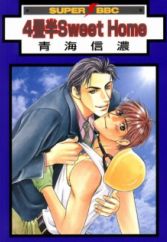 Series of short stories revolving around a poor builder and a wealthy proprieter, including: 1) Sweet Home Mizuho is living on the edge of poverty in a 4.5 tatami mat room (7.5 square meters) due to his family's debt. One day he collapsed from hunger and is carried home by his unruly coworker Yae-san. Is the willful Yae truly what he appears to be? 2) Sweet Prisoner A misunderstanding leads to S&M. 3) Sweet Worker A coworker takes an interest in Mizuho. 4) Sweet Memories Mizuho's old apartment is being torn down. 5) Northmen Takes place in the time of the Vikings. (Source: MU) 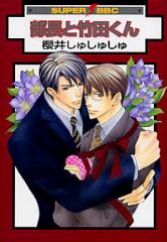 1. Buchou to Takeda-kun 2. Yume Miru youni Dakaretai Iizuka Kunio is facing middle age and is not going without a fight, especially since his younger subordinate Takeda-kun has been at his office. 5. Asayake no Anchikushou "Soap" was the name of a place where Motoki whored himself to homosexuals. He hadn't expected to work there permanently, but circumstances had left him to stay. Life wasn't that great, but a meeting with Jiro from the tofu shop changed that. And after that it seemed as though chance and kindness slowly weaved them into each other's life. 6. Seishun Nano Missile Heaven (The Attack of the Youth Missile) A oneshot concerning friends since elementary school, and it's time for a birthday celebration. Both boys seem to have their "gift" in mind. Who gets the gift? Who gives the gift? Who is the main course for dinner? 7. GINO 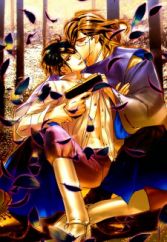 Main storyline: There is a kingdom on a island somewhere in the four seas (sry- not too fluent in Japanese), all was well until oneday it was attacked by an army of Demons via. sodomy (fill in your imagination)- and of course the Prince of this kingdom was taken prisoner by the Devil King. With his last strength*cough* the Prince casts a spell that takes this island to another realem/make invisible- so that this "carnage" is maintained. Our main 2 characters are the Princes #1 bodyguard, and the bodyguard's protege- so thus begins their quest to regain the kingdom, kill the demons, and save the Prince. But it won't be that easy, cause watch out the Demons are always ready for a through tumble! (Source: Manga Updates) 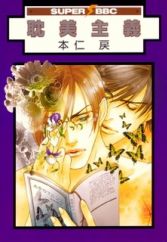 Compilation of short stories: • Visconti no Eiga no You ni • Romantic Romantic is the story of Konrad Nernst, a German-native who falls deeply in love with the Japanese Viscount he meets in his homeland. Walking a tight-rope between restraint and desire, Konrad agrees to return to Japan with the Viscount and serve as his butler. Every day the pair face the censure and mockery of those around them; the powerful magnates that control the Viscount's estate, the staff he employs and his devilish wife, Hanako. (Source: Blissful Sin) • Kiyomerareta Yoru (Transfigured Night) • Hetaria! • Koroshiya Drop • Shinshokusuru Shi no Gaspard 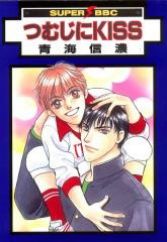 1) Any Form of Love Shou Fujii’s life of torture by his brother, Kou, started when they were children. His brother would deliberately do spiteful things to cause him pain. Now, that Shou and his brother are older his torment continues. Kou’s torture tactics have evolved from killing Shou’s treasured animals to repeatedly raping Shou. Can Shou’s long time childhood friend, Haba, save Shou from his brother’s twisted love? (Source: MU) 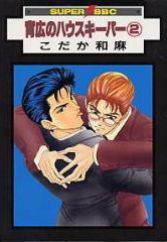 A series of short stories about business men in a romantic relationship. B-U 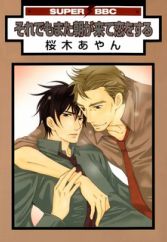 Takashi has fallen in love with his boss Natsume. He's been through the pain that comes with falling in love with another man many times, yet he can't fight his attraction to Natsume... And now he can no longer be satisfied with his unrequited love. A bitter office romance with a touch of sweetness. (Source: MU) 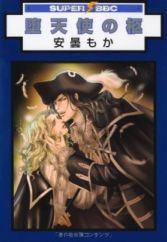 A story about a vampire and a man who likes to play the violin. 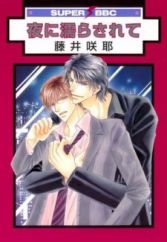 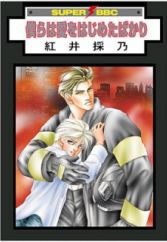 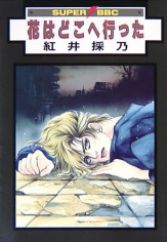 Story about a bored and apathetic photographer who leaves fame and the glamorous fashion world of tinsel-town Los Angeles for Sarajevo, hoping to find some meaning in his empty existence and pictures. There, he finally discovers love and beauty amongst the ruins of a war-torn country. (MangaUpdates)