Generally, one doesn’t think of a country and pair it with the word cute, but Hetalia Axis Powers changes that. Now countries can warm your heart and put a smile on your face. Let's take a look at ten of the cutest moments in Hetalia! 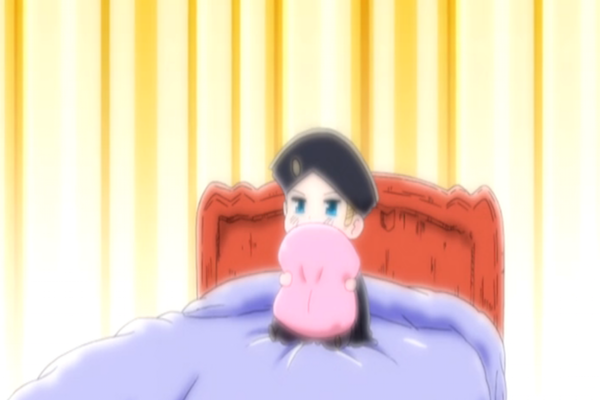 It took one look for spring to come to Holy Roman Empire. He is a chibi in love. Can you make him any more adorable than he is right now? Anyone want to break it to him that Italy is a boy? 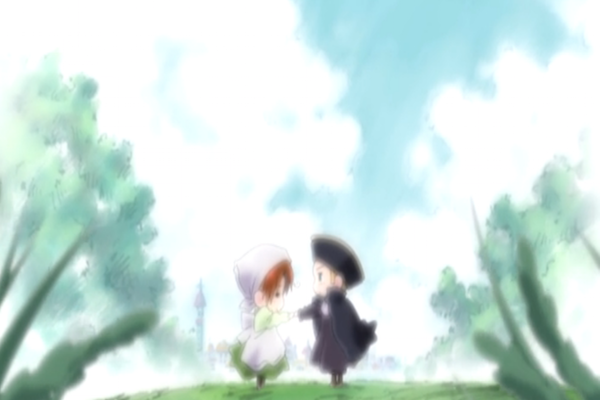 Holy Rome will leave heartbroken. But it’s not because Italy doesn’t care for him. Italy just doesn’t want him to end up like Grandpa Rome. He likes Holy Rome just the way he is. 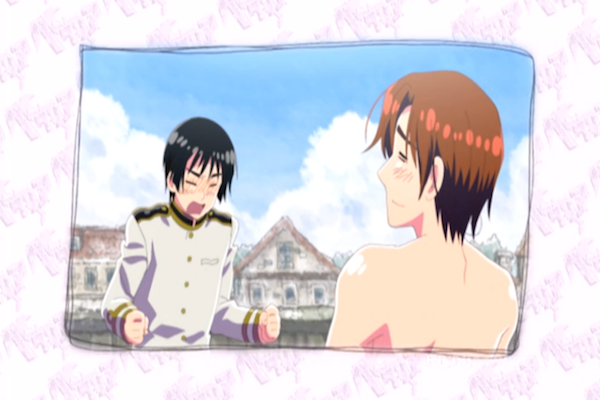 It’s hot and to Japan’s horror, the axis powers are going shirtless. Unlike the strange western countries, Japan is too modest to go around half naked. Japan, your reaction is adorable. What would we do without you to make us smile?

Liechtenstein’s Gift to Her Big Brother 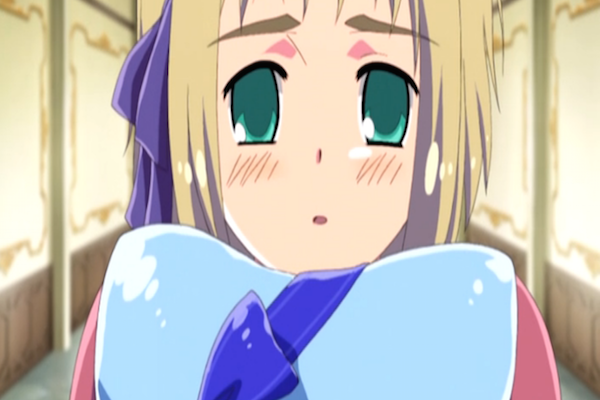 Liechtenstein decided to give her brother a gift in return for him getting her the lovely ribbon in her hair. She even took the time to hand make it herself. But she really shouldn’t have...really. Now poor Switzerland will look real "manly" in his bright pink and frilly nightie. 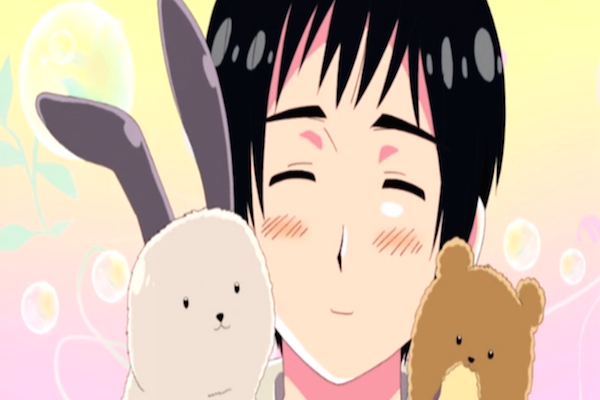 Japan is becoming more aware of other cultures, which is causing him a lot of stress. At least he has gained some new fluffy animal friends! Thank you France for drawing him out with your cat! Without you, the rest of the world might have been deprived of anime! 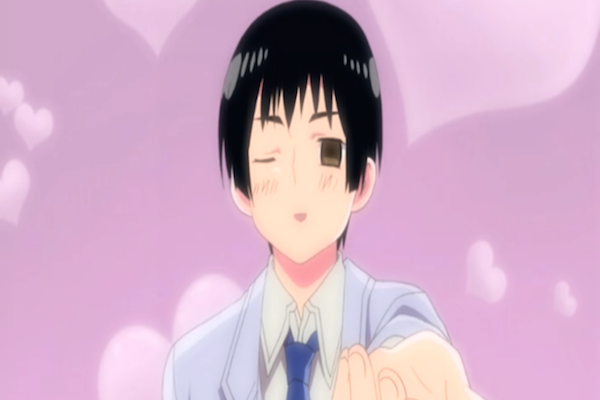 Japan is a playboy for about one second. Surprisingly, this ends in failure but for a second we get to see Japan with hearts in the background. Once again, thank you France! At the same time, thank you Japan for staying the way you are. You wouldn’t be nearly as likeable if you were like France. 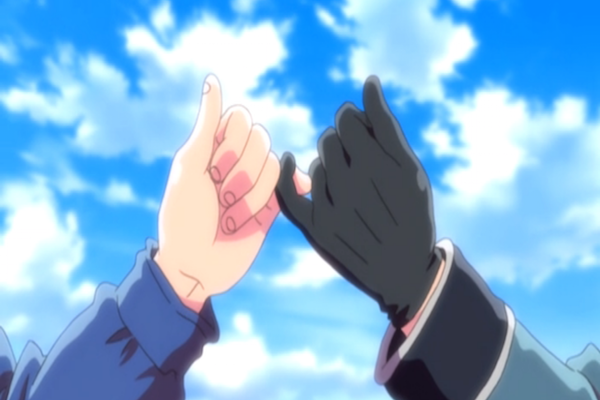 Italy had a dream where all his friends left him. Now he's afraid that it might become a reality. To easy Italy’s fears, Germany promises that they will be best friends forever. Germany, you are sweet and a little insane. Are you sure you want to be stuck with Italy…forever? 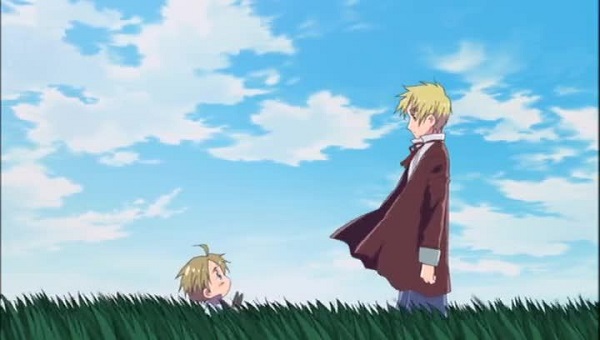 A new country has been found and dang it is cute! While it was a hard battle with France, Britain finally won himself a new litter brother. Enjoy it while you can Britain. America won’t stay cute or quiet for long. 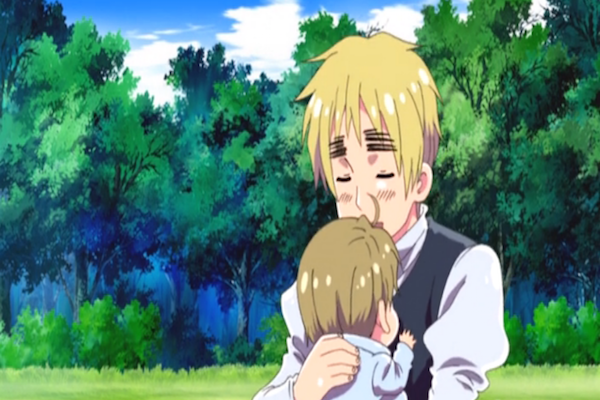 Britain showing his brotherly love toward baby America is probably the sweetest (and most attractive) thing he ever does. Now he’d probably never admit to caring for America this much, but we all know the truth! Men of the world, you might want to take a few notes from this scene. Nothing can melt a woman’s heart like a man caring for an infant. 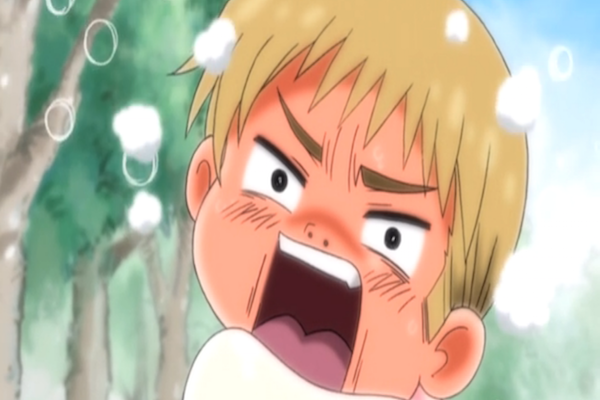 Holy Rome decides to take a bath in a river, but to his horror Italy stops by and wants to join him! Seeing as this is a flash back proves that Holy Rome really never noticed that Italy was a guy. It’s enough to make one wonder what he’d do if he discovered the truth. Regardless, it’s cute to see him turn that red!

Bet you never thought that an entire country could make you smile? If you’re not over sensitive about stereotypes then Hetalia Axis Powers is great for a laugh. Who knew it would be a good idea to make a comedy out of hyped-up stereotypes? If you liked this, be sure to check out the rest of the series!

Anime is filled with a variety of different characters: valiant protagonists, evil antagonists, and of course... cute children? Anime children come in all shapes and sizes. From innocent youngsters to kids more mature than your average adult, let's take a look at 15 fantastic boys and girls!