Death Note is and was one of the grimmest, darkest tales ever to be told in Japanese animation. That being said, even a tale about a magic notebook holding serial killer isn't afraid to goof off once in a while. Here are 20 funny moments in the anime series Death Note in rough narrative order.

The Chief Joshes the Rookie 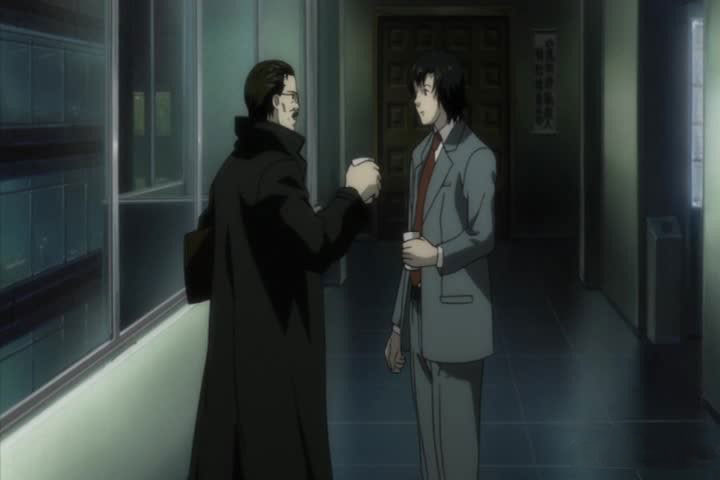 While not truly a ROTFL moment in the series, one of the very first true moments of levity in the anime series Death Note is a friendly talk between Matsuda, rookie cop and butt of many jokes to come (right), and Soichiro Yagami, who is chief of the NPA(left).This moment, despite only being mildly amusing, will shape and define Matsuda's character later on in an important way.

Ryuk gets addicted to Apples. 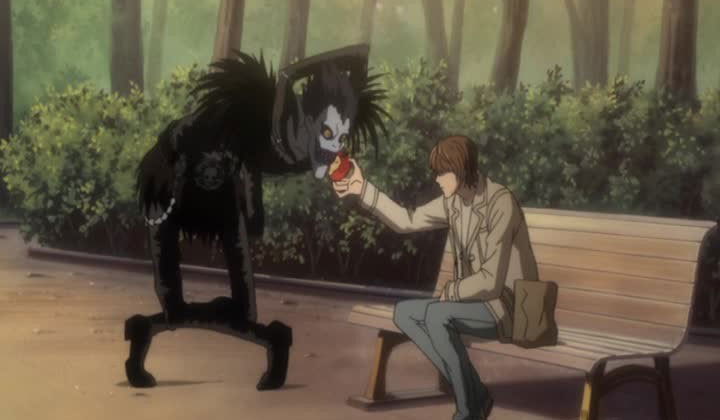 Why else would Ryuk be practicing yoga? Withdraw symptoms are bad.

L schools the cops in being careful with their lives 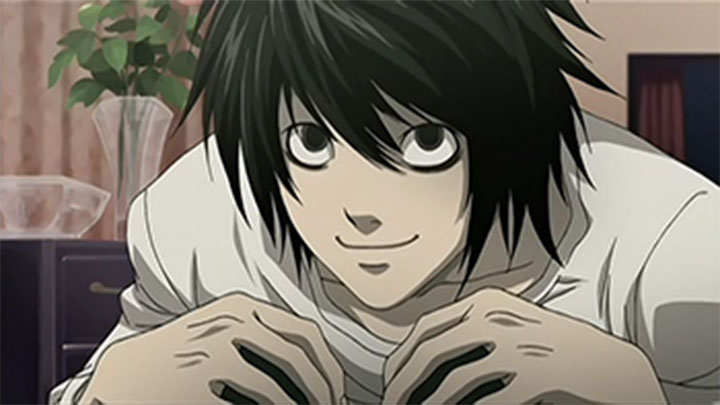 "Bang! You're all dead. What you get for not thinking with your head." L was never quite that poetic, but he was always a good detective. 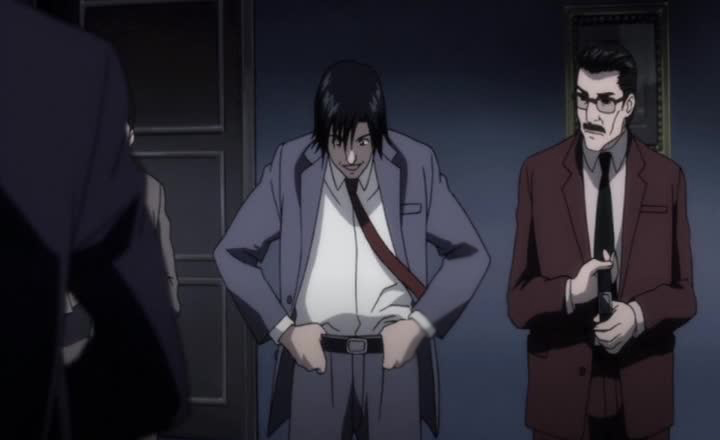 Matsuda: "These belts are awesome!"

I will take a potato chip...and eat it! 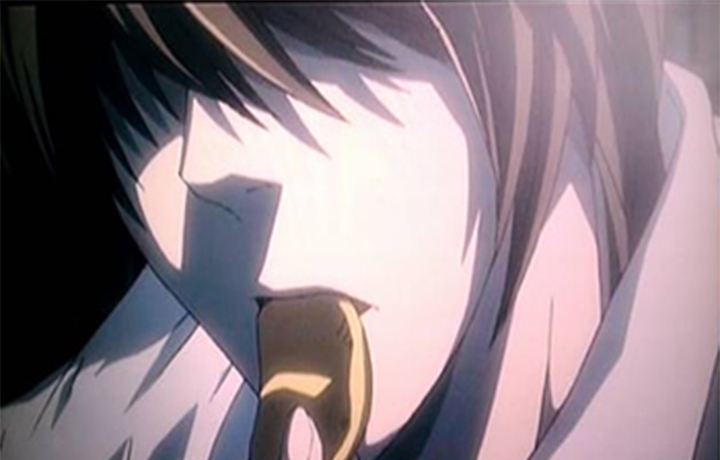 The soundtrack is epic. Too epic.

The world is a scary place. 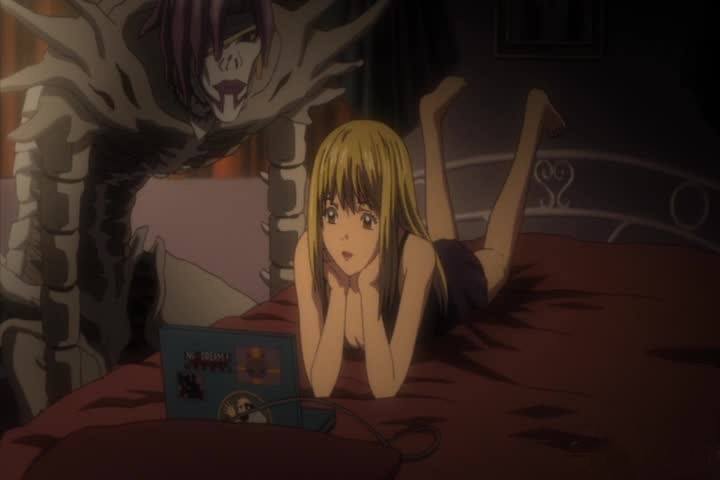 Addresses are so easy to find these days. Killer notebooks have nothing on Facebook. 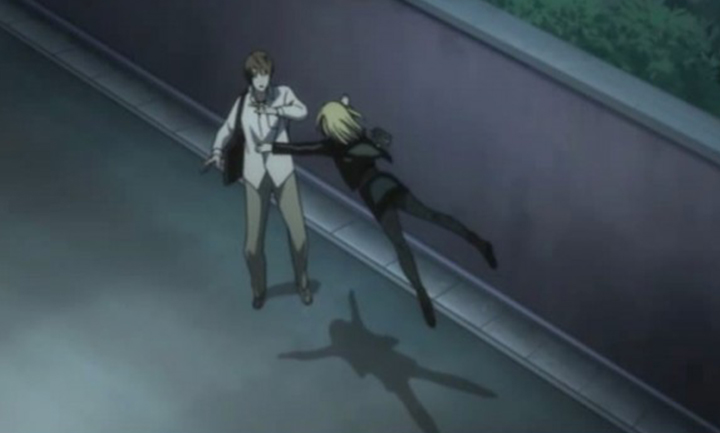 Fangirls. They come from nowhere.

L is caught by Misa 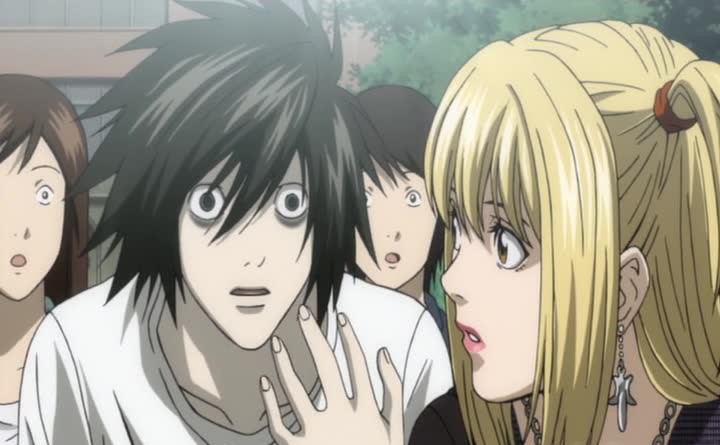 That awkward moment when a genius detective is caught...pickpocketing. 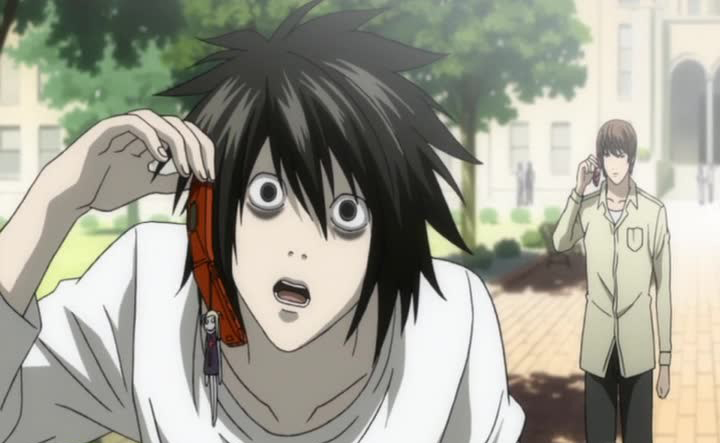 Ryuk gets withdraw from apples...again. 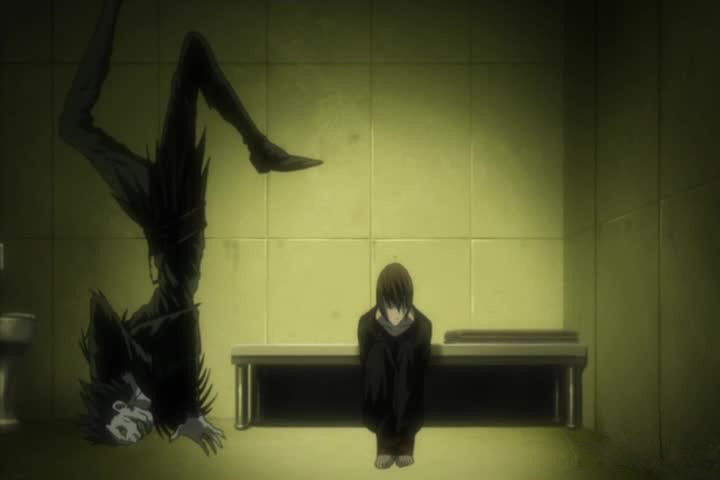 It was a shame L couldn't see him. Ryuk put on quite a show. 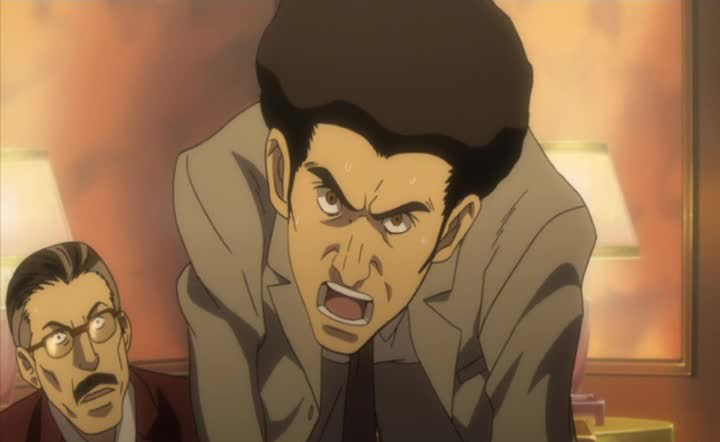 Oh anime. The more serious it gets, the more people can't stop laughing. 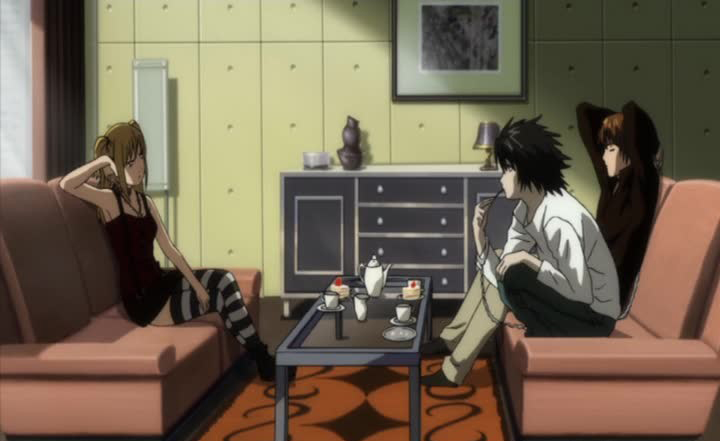 It is official. L might be a genius with perfect test scores. L might be super rich. L might even be the world's greatest detective even. But one thing L is not good with is the ladies. Seriously. Talk about a third wheel. 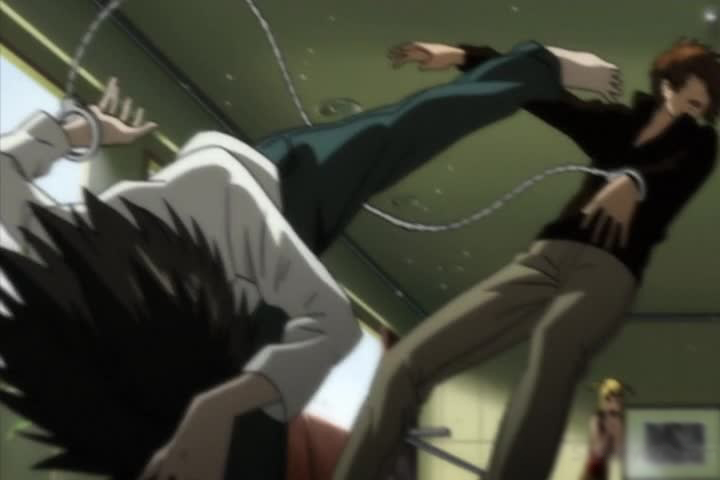 L 's ninja kick sends Light flying . Light has a chain attached to L. Misa just stepped in some cake. No one is having a good day here.

Matsuda breaks up the fight. By acting stupid. 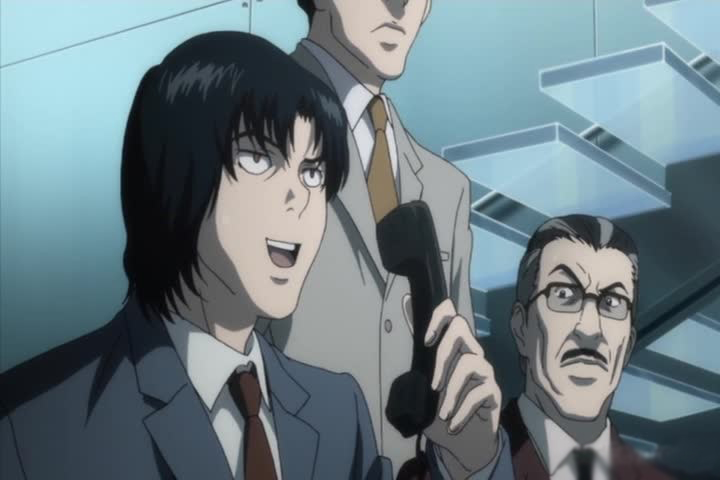 Matsuda sees the fight going on, and calls Ls room. He tells L about the contract Misa got. L hangs up the phone and calls him stupid. Oh well, at least they stopped fighting. 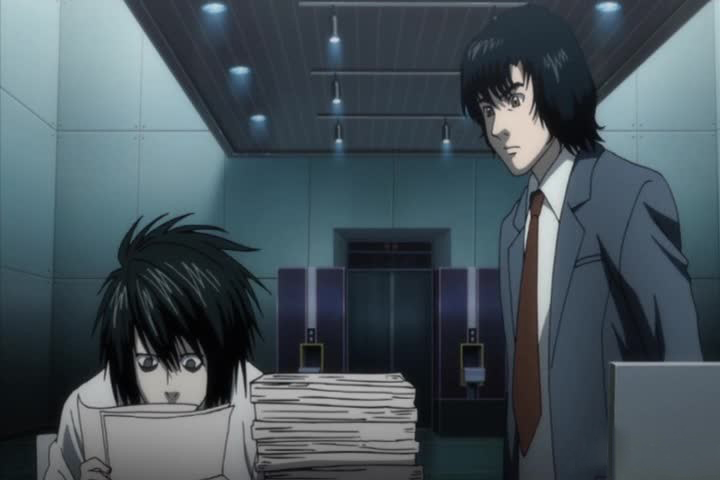 Matsuda: "Sir, I will give my life for the Kira case. What can I do to make this investigation successful?!"
L: "Well, rookie, you can start by shutting up and end by getting me some coffee. Any questions?"
Matsuda: "...No sir."

Misa cancels love scene. While they are shooting it. 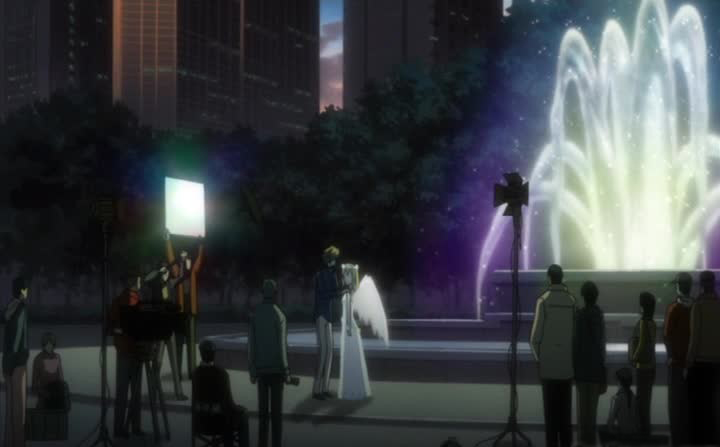 I'll give you this strawberry if you can keep a secret. 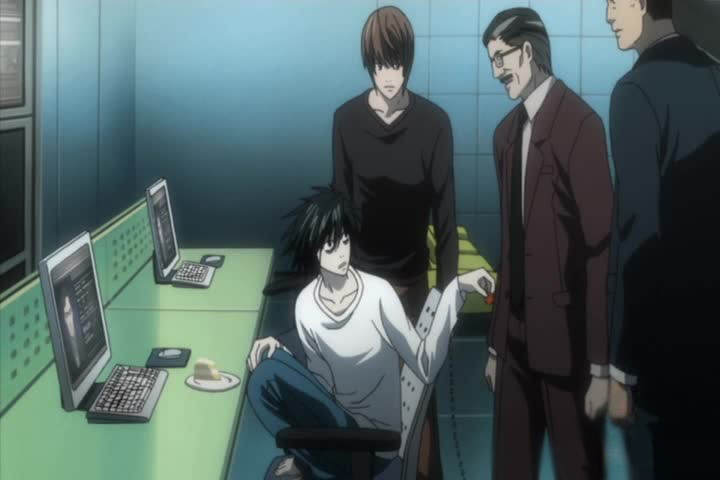 "Trust me. Strawberries are worth it."

Matsuda gets caught by the bad guys. 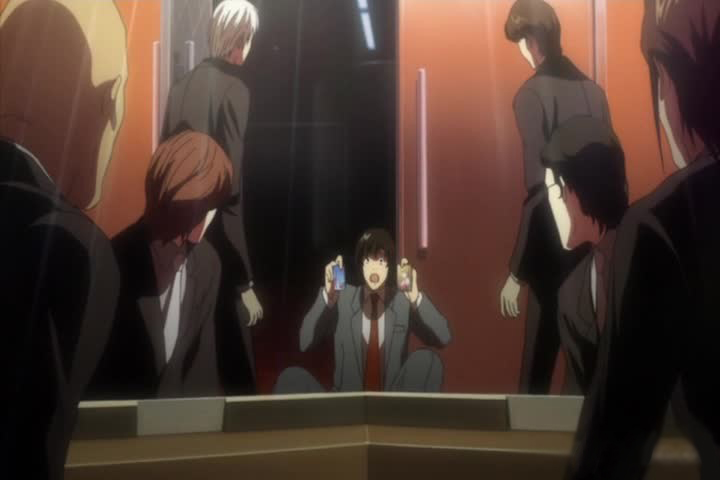 Matsuda has just infiltrated a huge corporation and was caught eavesdropping on the evil board members. They have the Death Note and now plan to kill him. His defense? A business card and a hot picture of Misa. L was right; Matsuda is kinda stupid.

Matsuda puts a show on the air. Literally. 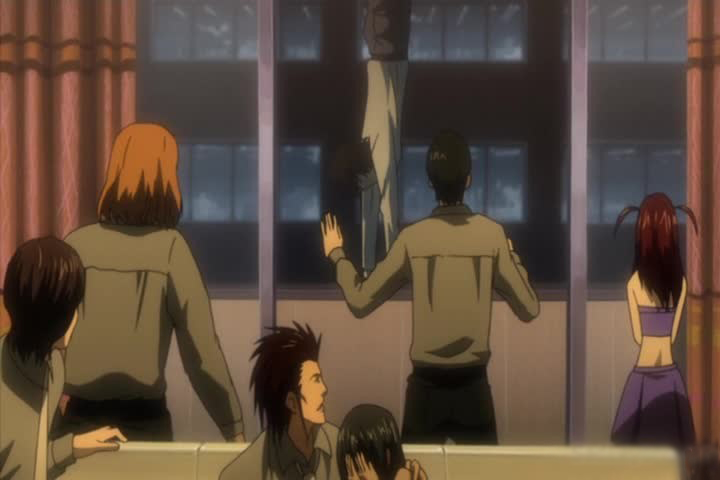 Its time for the amazing Matsuda show! An awesome live spectacle in front of a bad guy studio audience that proves that the only thing that can make you even stupider is a high BAC level. The surprise twist? He's not even drunk. L is planning an escape to end all escapes for the idiot that is Matsuda. Once again Matsuda contributes by simply acting stupid. It has become his specialty.

This is not the role I had in mind 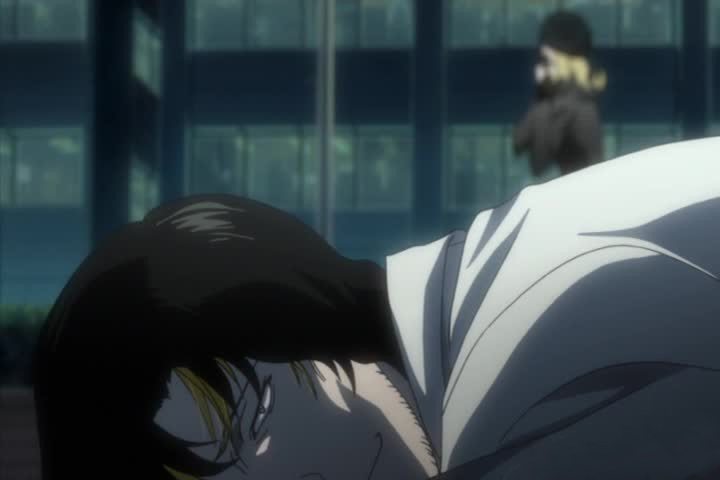 L's great plan basically involves faking Matsuda's death. The con artist up front and center is playing the role of Matsuda's supposed corpse. The reason the con artist doesn't look happy? He says himself that the idea of being a corpse does not appeal to him at all. Its a fair complaint; even casual actors hate playing the dead guy.

That's it for the 20 funny moments. Keep in mind that all of these quotes are for pure comedic value, and aren't quoted directly in the series. The show Death Note can be grim, even downright melodramatic at times. But even the most moody anime doesn't get away without having just a few laughs now and then. No comment on Golgo 13.

All screenshots courtesy of sadeeyore.com.