Hunter x Hunter has plenty of epic battles and fighting to please the average anime viewer. Here's a look into some of the most memorable battles!

In the Heavens Arena Arc, Gon challenges Hisoka in order to fulfill a promise he made back during the Hunters Exam Arc. Hisoka agrees to the battle after watching Gon’s progress as a fighter. 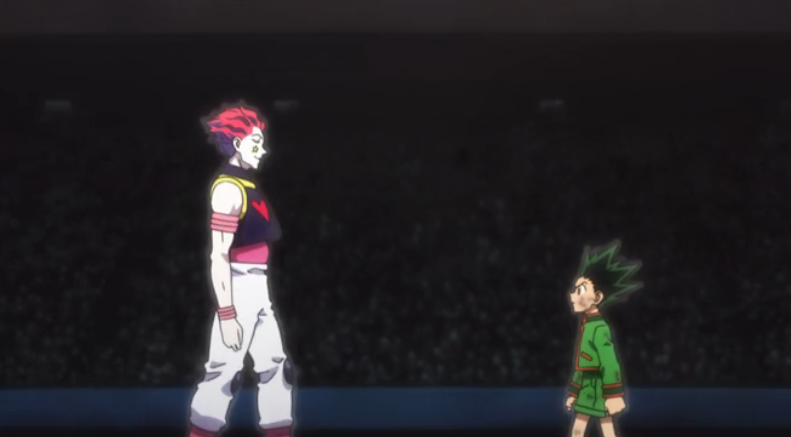 The battle starts with Hisoka standing calmly in the center of the ring. Gon makes the first move. Hosaka and Gon both avoid or defend against every attack. The action is quick and fluid, with leaps, dodges and punches. The art style and choreography in this fight is truly enjoyable to watch.

Hisoka lands a punch sending Gon flying. He’s not even trying. He hasn’t even moved from his spot. This infuriates Gon who attacks with greater fury. Gon manages to land a punch on Hisoka’s face. Gon’s promise has been fulfilled. Hisoka understands this and allows the fighting to cease, for a moment, while Gon returns the numbered tag from the Hunters Exam. The fight resumes with Gon’s honor restored.

What makes the battle between Gon and Hisoka great is the utter conviction between the two characters. Gon’s only true goal in the fight is to be able to give back the tag after landing a hit on Hisoka. He doesn’t expect to win, he just wants to redeem himself from an earlier failure. Hisoka wants Gon to grow into a worthy opponent.

Kurapika returns in the Yorknew City Arc. He’s mastered Nen and has taken a job as a bodyguard for a mafia overlord’s daughter. His sole motivation for working for the underground is based on his quest to find and defeat the Phantom Troupe, the group of people responsible for massacring his people and leaving him the only survivor. 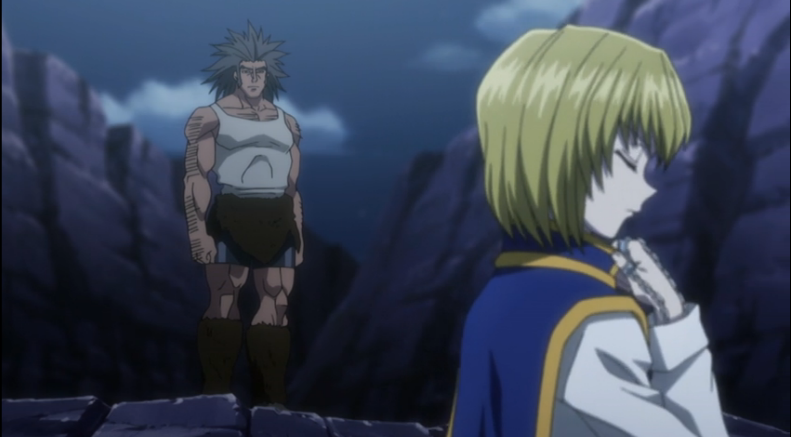 The battle between the Kurapika and Uvogin takes place outside the city in a deserted area. Uvogin is confident he can beat the rookie Hunter. He has no reason to fear Kurapika after defeating the mafia’s strongest force, the Shadow Beasts.

Kurapika, meanwhile, is calm. He shows no fear. During the battle, the viewer gets the real sense that Kurapika may have surpassed Gon and Killua’s skill in Nen. He seems a much more mature fighter when compared to his skills in the Hunters Exam. He’s fighting with an analytical mind with his rage carefully held in check.

One of the best parts of the battle is at the end. The colors switch to black and white with red as an accent color. It’s a great showcase for Kurapika’s rage and really drives home the darkness of Kurapika’s mental state when fighting against the Phantom Troupe.

In general, the motivation and emotions for Kurapika make his battle against Uvogin very tense yet satisfying to watch.

Kastro and Hisoka fought each other in Heaven’s Arena two years previously. Kastro lost and has spent the time leading up to the rematch training himself in order to defeat Hisoka. 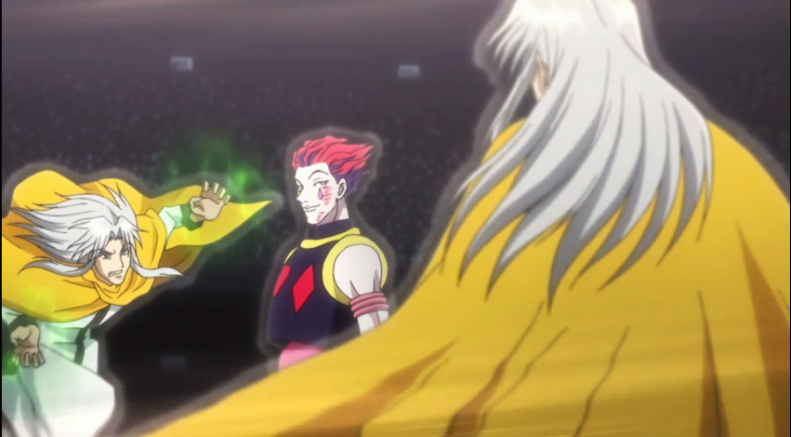 This battle highlights the terrifying power Hisoka possess. Though his opponent Kastro is a strong Nen user, Hisoka never loses his calm demeanor. He uses clever strategy and attacks to fight Kastro.

The battle between Kastro and Hisoka isn’t as fluid as the battle between Hisoka and Gon, but the battle shows Hisoka somewhat struggling for the first time. There is a lot of talking back and forth between the two characters, especially concerning Kastro’s abilities, and gives interesting insight into the different applications of Nen.

The Hunters Association has stormed the palace of Meruemm, the Chimera Ant King, with one mission objective: destroy the Chimera Ants at any cost. While the select Hunters take on The Royal Guard, Mereum agrees to follow Netero to an old abandoned nuclear testing site to fight. 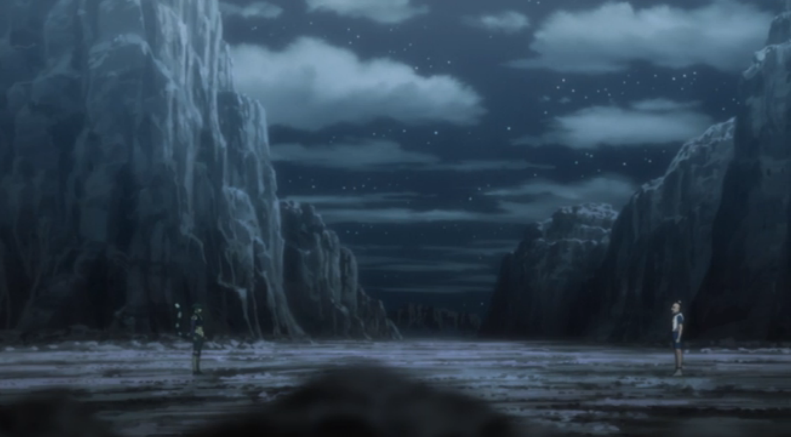 Netero challenging Meruem is easily one of the more climactic battles in Hunter x Hunter. Until this battle, viewers haven’t seen Netero’s fighting power nor have they seen Meruem challenged by any human in the slightest. This is the ultimate battle for humanity.

Meruem isn’t interested in fighting, however. He prefers to have an open discussion with Netero about his own philosophy on his role as the King born to rule the world. He’s discovered that his power should be used to protect the weak who deserve to live and not be used to torment the defeated. Netero realizes that Meruem’s Ant side and Human side are fighting for dominance, but the outcome is still going to be the same: Netero must destroy the Ant King before he begins to waver himself.

By using 100-type Guanyin Bodhisattva, Netero makes the first strike against Meruem. It proves ineffectual and surprisingly, Meruem prefers to talk instead of fighting. Netero offers to reveal the Ant King’s true name, given by the King’s deceased mother, in exchange for fighting. Meruem is convinced and the battle begins.

During the battle, both fighters develop respect for the other’s abilities. Both Netero and Meruem have waited their whole lives to find an opponent worth fighting and they end up enjoying the fight. They are still determined to destroy each other, though. 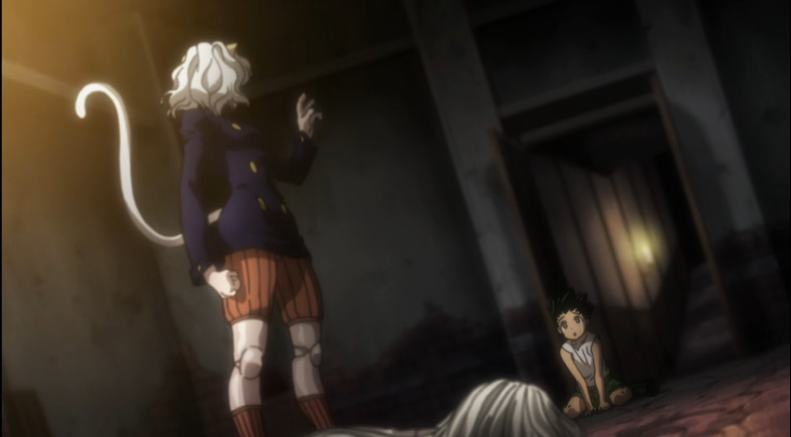 Until this point, Gon has been a strong, if a happy-go-lucky, fighter. He’s always enjoyed every challenge thrown his way. He learns from every battle and every opponent and is generally merciful towards his enemies.

His need for revenge overrides his normal personality during this battle. He goes to incredible lengths to make himself strong enough to battle Neferpitou.

Again, this battle makes use of the black, white, and red color scheme to highlight the mental state of Gon during parts of the battle. The Gon in this battle is not the Gon of battles past, and really captures the grief he is feeling and the malice he has for Neferpitou.

These battles are only a sample of the fights in Hunter x Hunter. The five battles represented here emphasize some interesting characteristics that make each battle epic. Gon is a very expressive fighter with his child-like stubbornness and sense of honor. Netero is a hugely powerful character with a quirky sense of humor that’s absent in his battle. Even the villains show some sort of code of honor and philosophy that mirrors the protagonists in a twisted way. And Hisoka is just plain fun to watch while listening to his Spanish-influenced theme song in the background.