My Word, the Elder Bairns of Blood-C!

Let's take a look at what the Elder Bairns in Blood-C may represent and invoke, from the perspective that the author and designers did not choose their characteristics by coincidence.

The Elder Bairns from Blood-C may house a deeper meaning under their terrifying skins, or lack thereof. "Elder Bairn" has multiple definitions, coming from the two words "elder" and "bairn," and may have some implications or meanings on what the Elder Bairns are supposed to represent. "Elder" is a generally common word, with two of the important definitions being "of a greater age" and "of a higher rank or position. "Bairn" is more uncommon, and it may add some significance to the phrase as a whole. The definition is "child," meaning "of a small age" or "son or daughter," and it comes from Scotland, which is not necessarily important since the Elder Bairn's origins are unknown and thus could be from anywhere. Anyway, putting the two words and definitions together, "elder bairn" could be defined as "a child of greater rank" or "an older child." This presents both the ideas that the Elder Bairns have a common origin, and also that they are the children of something.
We can look into one perspective of this idea and look at the idea of an elder and a child. An elder in many cultures is seen as a wise person and life guide for the younger generation; they are on their last legs and have experienced great things, thus garnering sympathy and respect, and are often venerated. However, this is not always the case and can hold some problems, because at times, the elders hold decrepit opinions and traditions.

This Elder Bairn stands on a lake, like it has emerged from hell to greet its victim. It closely resembles a Jizō Bosatsu, a Japanese divinity whose aim is to save a soul from the torments of a hell they have gone to for their wrongdoing; and in Chinese Taoism, to petition the 10 Judges of Hell who oversee the ordeal. The 10 Judges of Hell is also transitioned to and related to the 13 Buddhist Deities in the Shingon sect of Japanese esoteric Buddhism. Jizō Bosatsu again also guards the children in the riverbed of limbo, which is perhaps why it is seen on a lake. Considering the Elder Bairns are in danger and are going to be killed in this town, it makes sense that the Elder Bairn would attack the perpetrator of those killings, Saya. And since Jizō Bosatsu is part of the 13 Buddhist Deities, it gives significance to the fact there are 13 "regular" Elder Bairn fights in the series, as though the Elder Bairns are akin to the 13 Buddhist deities, and are trials that signify a deeper meaning. Also, Jizō Bosatsu seeks to teach travelers the ways of enlightenment. However, since the Elder Bairns are man-eating monsters, they would be a perversion of the teachings, so anything they signify would be as a detriment to humans, thus the traditions and teachings alluded to or invoked would be considered detrimental, also, and it really would be a detriment for Saya to learn anything from an Elder Bairn if it tried to teach her.
More importantly, Saya is essentially actually going through hell as she fights the Elder Bairns! And she started it all by killing the "guardian" type Elder Bairn, making it like a gatekeeper. 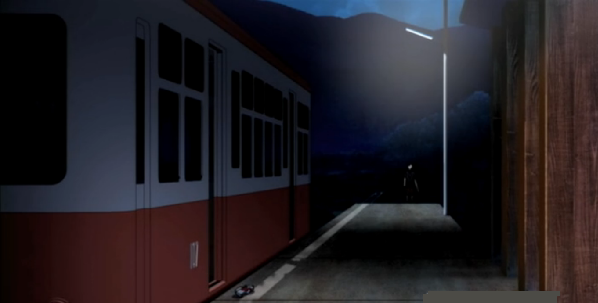 The train Elder Bairn takes the shape of a train and hypnotizes its victim into its clutches. Its appearance as a train and thus mentioning of the idea of a train may be an important aspect. To see that significance, consider how the train is an everyday aspect of many poor working class citizens and students. There are many people doing the same thing over and over and over again - taking a train. They do this because they must to get to work and do what they must to live in a society that requires money. They must work. Now consider how they do it so much that they get used to it, maybe becoming complacent and carefree to the things around them on the train. It is almost as though they are hypnotized, and they are hypnotized by constantly working and taking the train. It seems like a harmless aspect of life for the most part; and it is. However, consider how some countries could feed all of its citizens and house them without a need for them to work. Work for the most part is there to sustain business and to "make advancements," but all business and food could be sustained through rations, and the citizens can advance on their own impetus. So now it seems as though work and the things that come with it are forced upon us. And basically, because of these parallels, the train elder could satirize the monotonous life of the normal citizen, being hypnotized by work and everyday commonalities with no substance. Well, Saya handles that, does she not? "Honor the Strovetide," it says as it dies slowly, Strovetide being "permission to eat people," perhaps paralleling how tradition may "eat" the people in some way, like taking years of their life by forcing them to work. Awesome, Saya!

The centipede can be seen represented in Japanese mythology as a fearsome Yōkai called the Ōmukade. The tale goes like this. There is a large centipede monster living near the mountain in Lake Biwa. This large creature terrifies all that come near the bridge which is close by its dwelling, even antagonizing a breed of dragons who could not stop the Ōmukade from killing their fledglings. The dragons were powerless against it, but fortunately for them, a hero named Tawaratoda arrived. He slew the centipede, and thus his descendants were prophesied to have great power.
An important factor in this tale is that the dragons, with their divine power, were saved by a human male. It is a lesson on how to seek the help of others; even from an unlikely candidate, no one is to be underestimated, and everyone has their own power.
This alludes to the battle with the centipede Elder Bairn since Saya is seen talking to the sword, telling it to help her this one time. This personifies the sword, and thus the sword can be represented as the thing that helps, and the centipede Elder Bairn is essentially a strong force like the Ōmukade. So Saya bonds with her sword by relying on its powers and we see the significance of it, and she starts to carry the sword with her at all times after she speaks with her father. 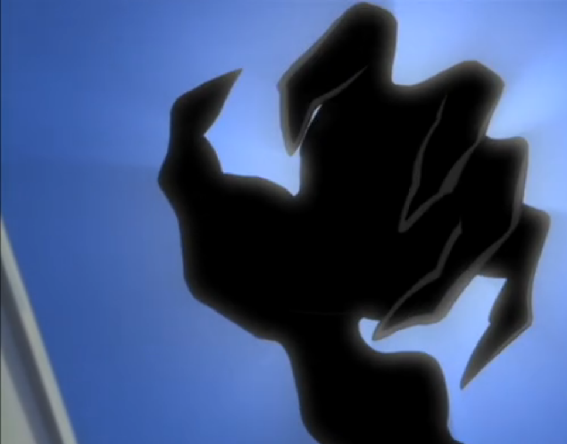 In Buddhist mythology, swords can be symbolic as chopping through abstract things like ideas. In the case of the samurai Elder Bairn, the sword would be trying to slice through Saya's rebellion against the Strovetide, constantly increasing the amount of swords it wields to try to break her down with a continuous barrage. It also taunts her, trying to belittle her, trying to take away the power that she has. But Saya shows her mental strength and kills it, allowing her to grow and get closer to her past form that has a calm and focused mind. So the samurai Elder Bairn represents the breaking down of mental focus. Stay focused.

The Tsuchigumo is a spider-like creature, the closest resemblance to the spider Elder Bairn. How it kills Saya's child classmates and causes one of the bloodiest scenes up to that point may be significant. The significance could be related to how arachnophobia is one of the most prevalent phobias in the world, thus spiders can represent and personify fear under normal psychology, and so the spider Elder Bairn is going to be the most gruesome and cause the most terrifying scene of the Elder Bairns seen so far. Since Saya kills the spider, she kills the representation of fear, thus her fear, and perhaps the fear of society.

The incomplete elder bairn resembles the Hone-onna. Like the supernatural creature, the incomplete skeleton Elder Bairn seems to hide her skeletal figure, quite possibly using it to lure victims to drain their life just like the Hone-onna. Since the incomplete skeleton Elder Bairn's face does appear mostly normal, she can appear like a normal woman to lure male victims .
She also brings up the quandary of the hypocrisy of demonizing a monster, like a vampire who feeds on humans. Humans likewise eat other animals, but we may demonize something that would eat humans. It is a hypocrisy, although necessary to protect us from predatory things and persons.

Straightforwardly, the canine-like Elder Bairn culls the defectors which would work against the hell that is the experiment and town and destroy its illusion. Fumito calls the defectors "actors," paralleling how in society there are times when we must act a certain way so as not to garner the wrath of the "watchdogs" of society.

The rabbit Elder Bairn is summoned by way of mirror. Normally speaking, a mirror reflects what is in front of it; but it is actually an illusion. Also, the mirror in Japanese culture represents truth and and self-realization, similar to enlightenment. So when the mirror is broken, so is the illusion, and thus the rabbit Elder Bairn represents what happens when the illusion is broken and the truth is revealed. The people see the monstrosities as they are and panic, whereas the monstrosity tries to hide the truth by killing it. The illusion is wiped out both metaphorically and physically, and so can be the truth. However, Saya wipes out the rabbit Elder Bairn's main body, thus signifying that the main power that tries to hide and destroy the truth to allow the self-realization and enlightenment of the people while keeping the peace.

The Six (or Seven?!) Braves of Rokka no Yuusha

In Rokka no Yuusha, the Braves of the Six Flowers are chosen by the Goddess of Fate to fight off the Demon God. But when they all meet, they realize there are seven of them! Let's explore the personalities of these chosen warriors.

Inuyasha: A Feudal Fairy Tale has had a number of intriguing supporting characters that flushed out the series and expanded the dynamics of the main characters through their interactions with them. In this analysis, we'll be looking at those who had the most influence over several arcs.

High School DxD is set in a fantasy world filled with diverse characters: angels, demons, gods, and even dragons! These characters take on roles of Evil Chess Pieces to battle in sanctioned matches to increase their ranks. Enter if you dare!