Wow it's finally here, I can't wait to head to my closest Gym and have a shot at taking it over! Never mind.

After several delays, Japan was clearly beginning to grow a little tired (as was the rest of the world) of the wait for Pokemon GO. But then all of a sudden, even before the official Tweet from the Pokemon GO Twitter account came through, players had stumbled onto some happy news. Pokemon GO had been released Friday morning in Japan. You can see exactly when news of Pokemon GO's release hit critical mass in the graph below.

But already players have been running into some very obvious issues that no doubt have occurred as a result of the staggered global release schedule. 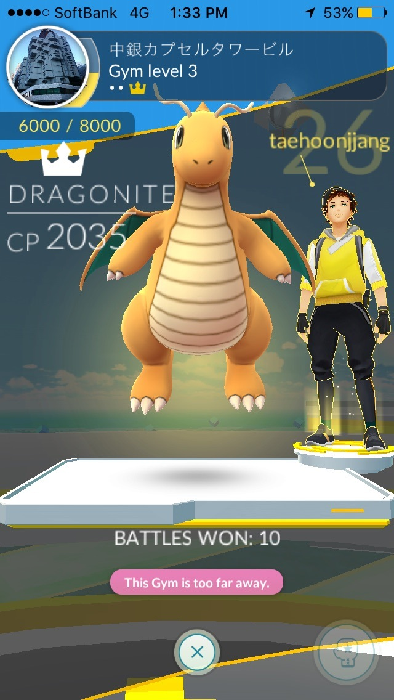 There's absolutely no way that Dragonite should be there. Reddit users on the PokemonGoJapan page have been reporting that gyms in the busy Tokyo suburbs are already overrun by high level trainers and their pokemon, and players that are just getting to the game would have no chance to defeat them.

So Japan's sat through two weeks of a constant barrage of Pokemon GO media coverage, with literally every country that has access to the game losing their damn minds over it and inadvertently rubbing it in everyone's faces - not to mention that anyone unlucky enough to have foreign Facebook friends would no doubt have seen their newsfeed absolutely overrun with Pokemon GO related content. And now, this! Kind of demoralizing to say the least.

I have no idea what kind of fix you could implement for this, but goddamit Niantic, do something!

When the Pokemon Go trailer debuted in September of last year, it started trending on YouTube and got people really excited about Pokemon again. But who could possibly have anticipated THIS.